He’s asking EPA Administrator Andrew Wheeler to suspend use of the study in enforcement until a complete peer review is conducted.

In the wake of the study, a handful of Lower Valley dairies were required to drastically change the way they handle animal waste after being sued by environmental groups.

Newhouse complains that those costly changes forced one dairy out of business and that another has paid about $11 million to come into compliance.

High concentrations of nitrates in drinking water can be harmful to infants, pregnant women and the elderly, according to the Centers for Disease Control and Prevention.

Nitrates naturally occur in soil, but they can become concentrated by the heavy use of fertilizers — including animal waste — and leaky septic tanks.

In a Monday news release, Newhouse accused the Environmental Protection Agency of not allowing a thorough peer review of the 2012 study that he said “continues to be used by both the EPA and environmental litigators to cause severe damage to Washington state’s dairy industry.”

But the EPA and the state Department of Ecology stand behind the study, saying a complete peer review was conducted.

Newhouse may be focused on the 2012 report and overlooking the results of the peer review, which was included in a final study a year later, said Melanie Redding, a hydrogeologist with Ecology’s environmental assessment program.

Not so, said Elizabeth Daniels, spokeswoman for Newhouse.

Newhouse said the peer review wasn’t thorough enough, and that it’s time to take a thorough look at the matter, Daniels said.

“This is the first time he’s asked for a full peer review,” she said. “I know that we have heard from a lot of dairies that this study could be used as a way to litigate against them.”

Newhouse included in his news release a link to the study’s final 2013 report as well as letters from agencies that found flaws in the study and his request to the EPA for a full peer review.

December 2012 letters from the state Department of Agriculture and the Natural Resources Conservation Service said the study didn’t consider the construction of rural domestic wells, nor did it thoroughly assess the effect irrigation and years of farming had on nitrate levels.

Newhouse also referenced a letter from the state Department of Ecology that said the study didn’t adequately consider the depth of the wells and that monitoring wells should be installed in a final phase of the study that was in response to the peer review.

EPA did install a handful of monitoring wells in the study’s final phase, Redding said.

She said the study was comprehensive and accurate.

“If I could design a study to look at what the nitrates are in an area and I had a lot of money to put into it, this is the kind of study I would design,” Redding said.

In a June 19 letter to Newhouse, an EPA regional administrator said a second peer review of a seven-year-old study wouldn’t be useful, but invited a new study based on data gathered since 2013. 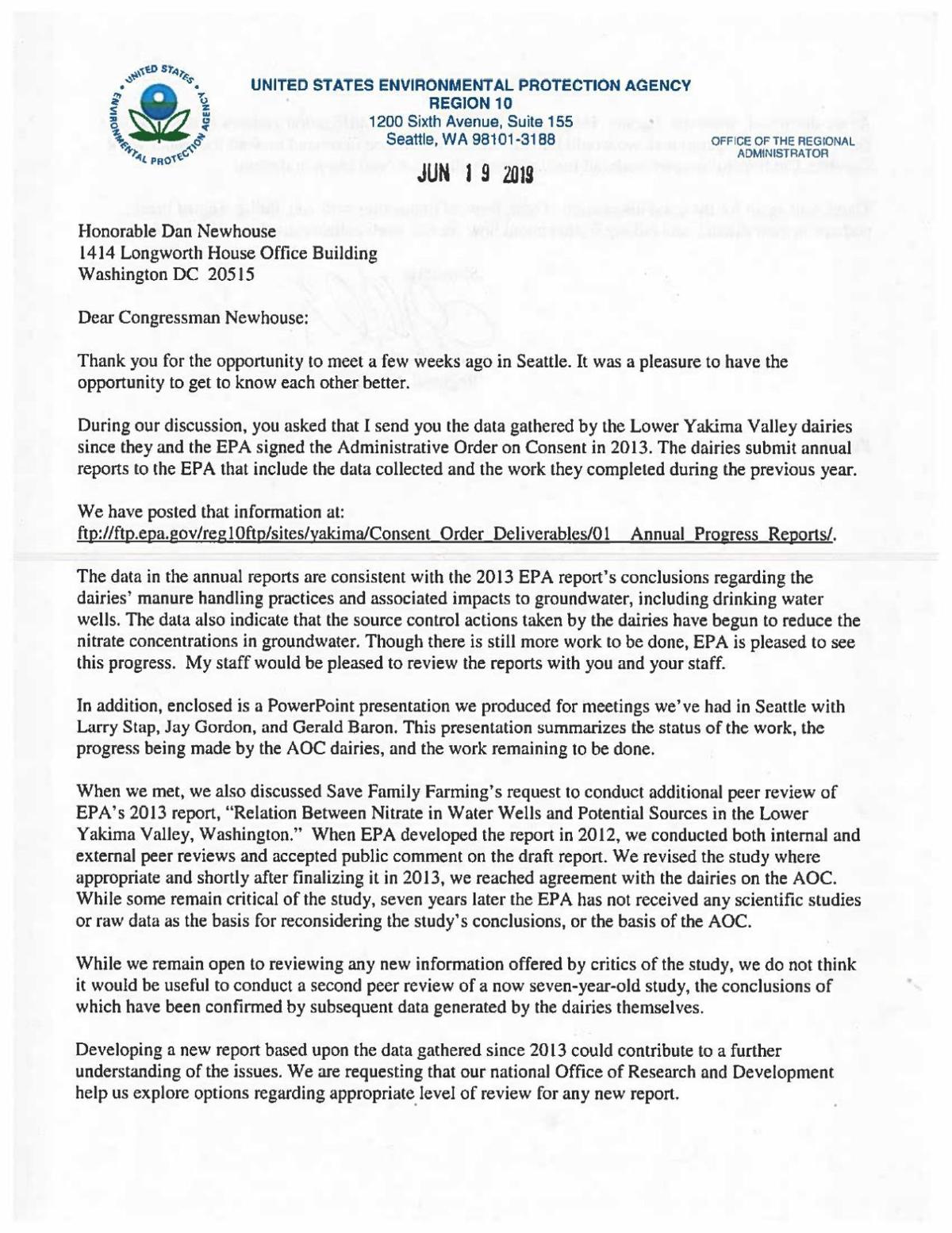 “We are requesting that our national Office of Research and Development help us explore options regarding appropriate level of review for any new report,” Regional Administer Chris Hladick said.

Three environmental groups — Community Association for Restoration of the Environment, Friends of Toppenish Creek and Center For Food Safety — filed lawsuits this past spring against Sunnyside Dairy, SMD LLC and DBD Washington LLC.

Those groups previously sued Cow Palace of Granger, George DeRuyter and Son Dairy and D&A Dairy of Outlook, and Bosma-Liberty Dairy of Zillah. Those dairies were forced to change their practices under a federal consent decree.

This isn’t the first time Newhouse has challenged the study or the federal judge’s decision in the case against the dairies. The judge ruled the dairies’ mismanagement of animal manure was a violation of the Solid Waste Act.

In 2017, Newhouse introduced a bill that aimed to remove animal manure from the Solid Waste Act, saying Congress never intended the act to govern animal or crop waste, manure or fertilizer.

“Rep. Newhouse should be ashamed of himself for trying to protect a few campaign contributors that have fouled this Valley rather than asking for the Department of Justice and EPA to take immediate action to protect human health and the environment to stop this widespread pollution problem,” she said in the statement.

This story has been updated to correct the spelling of Melanie Redding.