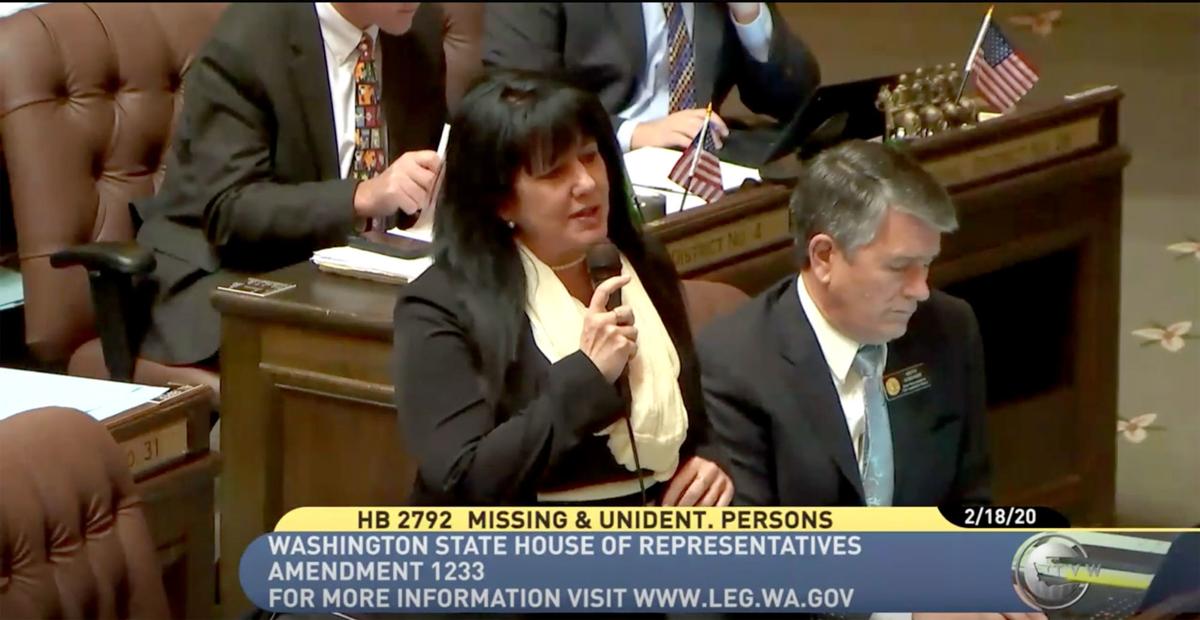 Rep. Gina Mosbrucker, R-Goldendale, speaks Tuesday morning in support of Cody's Law. The legislation she introduced early this month centered on missing persons would require that law enforcement enter information about missing persons into the National Crime Information Center, an electronic clearinghouse of crime data, among other steps. It's named for Cody Turner, who was last seen in Yakima on July 26, 2015.

Rep. Gina Mosbrucker, R-Goldendale, speaks Tuesday morning in support of Cody's Law. The legislation she introduced early this month centered on missing persons would require that law enforcement enter information about missing persons into the National Crime Information Center, an electronic clearinghouse of crime data, among other steps. It's named for Cody Turner, who was last seen in Yakima on July 26, 2015.

Michelle Joe last spoke to her son, Cody Turner, in an emotional phone call. Turner disappeared after leaving his grandmother’s Yakima home, where he lived with her and his father, on July 26, 2015.

Joe thinks her son, who was 24 when he went missing, is dead. But like others with missing loved ones, she is denied the rituals to help them navigate the pain of losing a loved one. Families of the missing are left with an incomplete puzzle, Joe said in comments she wrote in support of legislation introduced by state Rep. Gina Mosbrucker, R-Goldendale, and named for Turner.

“We suffer in a world of not knowing. Imagine if you will, your dad or mom leaving to run errands and never returning. Or your brother or sister’s car being found abandoned, but there is no sign of them. Or your child walking to or from school and disappearing along the way,” Joe wrote.

“Imagine the fear and uncertainty, the inability to sleep, the growing panic. Imagine that feeling, continuing for days, months, years or even decades. Imagine going through every birthday, every holiday, every anniversary for the date that your loved one went missing, and never having an answer if your loved one is alive or dead.”

On Tuesday morning, members of the Washington House voted 97-0 to pass Cody’s Law and an amendment. Mosbrucker is lead sponsor of the bill, which would require investigating agencies to file a missing person report with the Washington State Patrol’s Missing and Unidentified Persons Unit, collect DNA samples from family members and ask family or next of kin for consent to get dental records.

Along with those steps, authorities would enter missing persons cases into the National Crime Information Center when the missing person has not been found within 30 days of the report or at any time the agency suspects criminal activity is involved. Operated by the FBI, the NCIC is a massive electronic clearinghouse of crime data provided by the FBI, federal, state, local and foreign criminal justice agencies and authorized courts. It is accessible to law enforcement agencies nationwide.

The amendment removed provisions that would require investigating agencies to submit missing persons cases to the National Missing and Unidentified Persons System (NamUs), which is a publicly accessible database operated by the National Institute of Justice, and to search the Jail Booking and Reporting System for missing persons.

In comments supporting the amendment, Mosbrucker noted the change from NamUs to NCIC came after discussion with law enforcement agencies.

“This amendment is agreed on between (officials with) Washington State Patrol and also with WASPC, the Washington Association of Sheriffs and Police Chiefs ... They found a way to route this better than we had originally planned in the original document,” she said.

Cody’s Law, which moves on to the Senate, would still require that if a body or human remains are still unidentified 30 days after discovery, the investigating county coroner or county medical examiner submit information regarding the body or remains to NamUs. That follows sending dental examination records within 30 days of discovery to the State Patrol’s dental identification system.

Rep. Roger Goodman, D-Kirkland, noted that there are up to 200 unidentified sets of human remains in Washington state. “This bill will put in place the right investigative tools both in-state and across the states around the country to possibly and hopefully identify these missing loved ones and provide healing and closure to those families,” he said.

The legislation also provides that, when funded, WASPC must regularly transmit information contained within the statewide missing and unidentified persons website to NamUs.

According to NamUs, more than 600,000 children, young adults aged 18-21 and adults go missing in the United States every year. Many missing children and adults are quickly found, alive and well, the website notes. And as authorities stress, adults have the legal right to go missing. Investigators have located people who have chosen to cut ties with loved ones; in such cases, they can tell family only that the person is alive.

NamUs and NCIC are two of the biggest and best-known databases for missing persons and unidentified remains, along with the National Center for Missing and Exploited Children, which like NamUs is publicly accessible.

As of Jan. 29, shortly before Mosbrucker introduced Cody’s Law, there were 687 open missing person cases in Washington state and 135 unidentified person cases entered into NamUs, according to information Joe provided. While that list likely isn’t complete, the NamUs database of missing and unidentified persons has grown substantially in the last few years, said Janet Franson, a retired law enforcement office who runs the Lost and Missing in Indian Country page on Facebook.

“The good thing about NamUs is it gives a place for people to go to list the missing persons that have gotten lost or fallen through the cracks over the years,” Franson said. “There are several hundred Native people documented now that were not just five years ago. I would know; I entered a lot of them myself.”

One of the biggest challenges in finding missing persons and identifying remains is related data — its accuracy, its availability and how much law enforcement agencies are willing to share with each other and the public. That has become especially obvious in cases of missing and murdered indigenous people, a cruel legacy that has continued for decades.

The Washington State Patrol Missing & Murdered Native Women Report, which was released in June as result of legislation led by Mosbrucker, notes that no federal agency has comprehensive data on how many indigenous women are murdered or missing, and numbers vary among multiple databases, not all of which are available to the public.

According to information in the report provided from the NCIC, in May the state had 1,802 missing persons. Of those, 56 were missing Native women. That was broken down by counties; Yakima County had 20 Native women who were missing that month, the highest county total by far. Only King County, with 12, was close.

In September, the Seattle-based Urban Indian Health Institute released a report, “MMIWG: We Demand More,” as a response to the State Patrol’s report. Among other issues, inaccurate and incorrect information of race undermines and diminishes the ability to understand the true scope of missing Native women in Washington state, the report says.

Mosbrucker mentioned the importance of accurate data in urging passage of Cody’s Law.

“What we learned the most — we have to have one central place to gather the information and not a bunch of different entities,” she said. “It’s the same thing on the Native American missing and murdered bill. We have to have data go into one single place in order to get a number that’s authentic for the state of Washington and across the nation. This bill simply finds the best path to do that.”

In showing her support, Rep. Jenny Graham, R-Spokane, stressed her desire to identify Jane and John Does and return them to their families.

“This is an answer to help those families get their loved ones back. For the (Green River Killer) case, there are victims right now ... in this old case that are in boxes, in evidence,” she said. “They’re in evidence, and I would love nothing more than to get those remains back to their families so they can have a proper burial. It’s time for that.”

Michelle Joe remembers walking upstairs to use the bathroom on the morning of March 12. More than two weeks later, she regained consciousness …