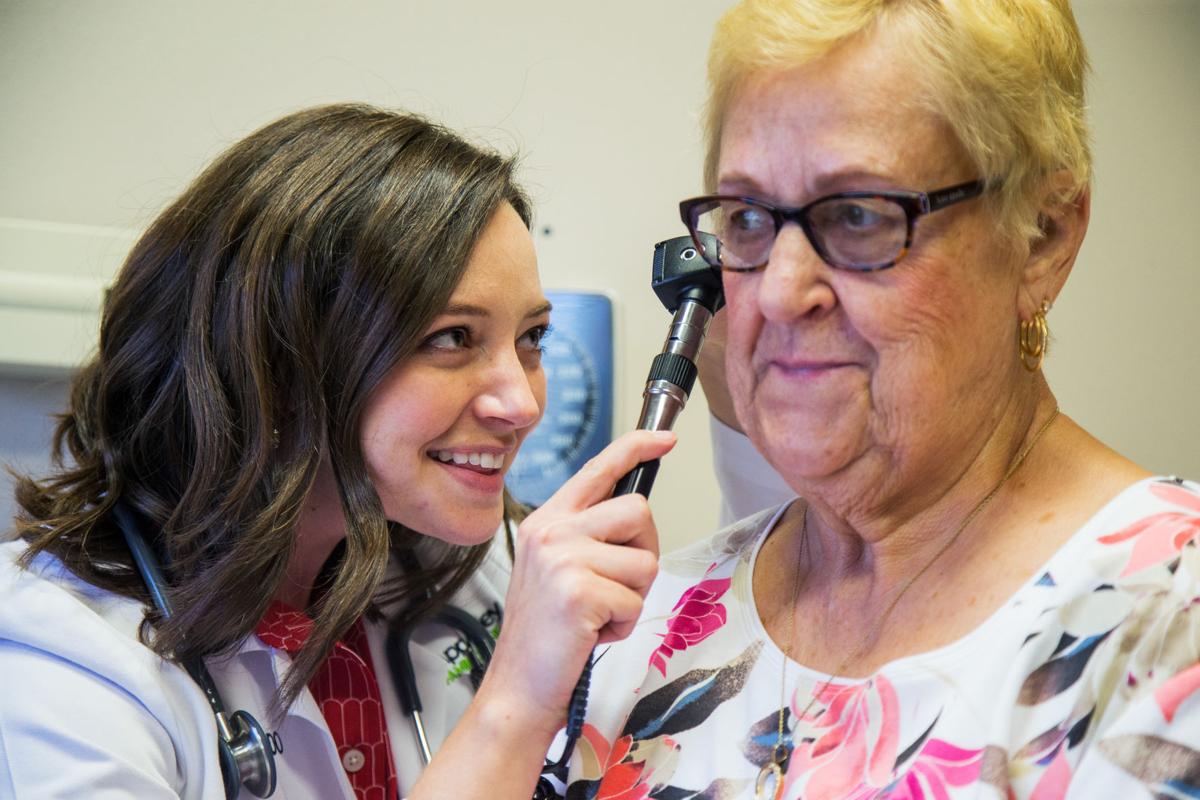 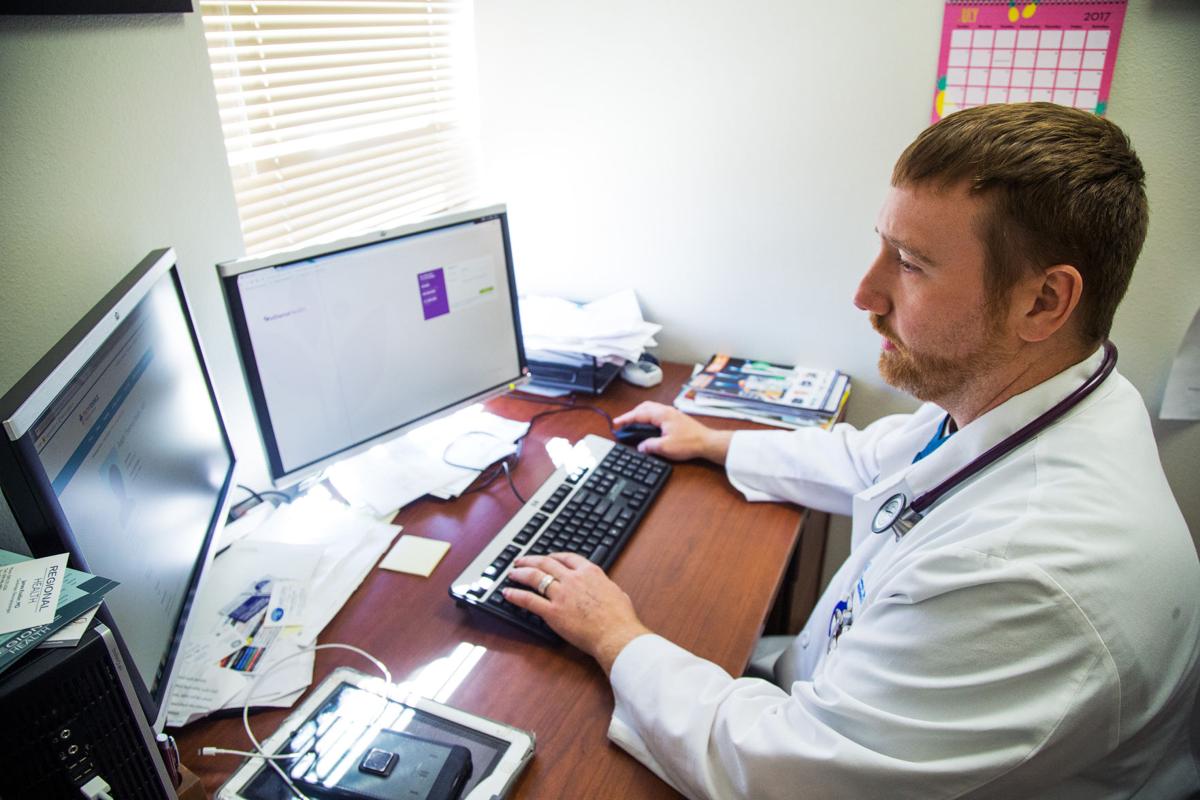 Dr. Vaughan Bulfinch works at his desk between patients during his shift at the Selah Clinic in Selah, Wash., Monday, July 31, 2017. The 34-year-old graduated from Pacific Northwest University in 2012 and has been practicing family medicine for the past years. (SHAWN GUST/Yakima Herald-Republic)

Dr. Vaughan Bulfinch works at his desk between patients during his shift at the Selah Clinic in Selah, Wash., Monday, July 31, 2017. The 34-year-old graduated from Pacific Northwest University in 2012 and has been practicing family medicine for the past years. (SHAWN GUST/Yakima Herald-Republic)

While Yakima still grapples with a major primary care shortage, the local medical school sees hope for the future in its graduates coming back to practice here.

Sure, the Valley doesn’t have big-city amenities, and medical recruiters often cite difficulty convincing doctors that their spouses will be able to find jobs here, too.

But Pacific Northwest University leaders say its focus on drawing medical students from rural areas of the region is paying off as those students return to rural, underserved areas as doctors.

Many of those areas are among the sites in Washington and neighboring states where third- and fourth-year medical students are sent on clinical rotations.

“We’re seeing them fill in the empty places throughout those 16 sites,” said PNWU president Dr. Keith Watson. “We’re pleased that our graduates are choosing to return to the Northwest in general, and specifically Yakima.”

PNWU graduated its first class from the College of Health Sciences in 2012. Residency programs are a minimum of three years long. This summer marks the time that PNWU’s third class of graduates should be finishing up their residencies and entering the workforce as fully licensed osteopathic physicians.

Watson said he’s still waiting on reports of where the class of 2014 is ending up.

Of the first two classes, those who stayed local often have family ties to the area, and have come to appreciate the patient population here, they say.

As of May this year, 78 of 142 alumni from the first two classes are now practicing, with the rest still in residency training or fellowships. Of those now in practice, 43 are in Washington state, mostly in primary care and many in rural or underserved areas.

Six of those returned to the Yakima area, joining practices in Yakima, Selah, Ellensburg and Prosser.

Dr. Vaughan Bulfinch, 34, is originally from Anacortes and has been practicing family medicine at Selah Clinic for almost two years after graduating from PNWU in 2012 and from the Yakima residency in 2015.

Right now, he’s the sole practitioner at the clinic, working four days a week. He also spends time serving as alumni adviser on PNWU’s Board of Trustees, as a hospitalist at Yakima Regional Medical and Cardiac Center, as director of Regional’s hospice program, and as a supervisor for medical residents working in the hospital.

“It’s absolutely lived up to my expectations. I was looking to do full-spectrum family medicine,” Bulfinch said. “It was really important to me to get to be able to use all the training I got in residency, and I absolutely have been able to do that.”

His wife is from Selah, and they plan on staying put for the foreseeable future, he said.

“I really like the medical community in Yakima; it’s very open and different specialties all support each other,” he said. “I always wanted to be working in a rural environment.”

Dr. Jennifer Pontarolo, 31, at Apple Valley Family Medicine says the close-knit community is one of the main positives she’s experienced in Yakima.

“I liked knowing the specialists personally here. That’s been nice in my decision to stay,” she said. “I can just call Dr. Krueger or someone at the Heart Center up and they already know who I am, so it’s not as intimidating.”

Moving here from Golden, Colo., Pontarolo didn’t know which branch of medicine she wanted to specialize in or where she wanted to live, but she ended up enjoying Yakima and met her husband here. She graduated PNWU in 2013 and went on to complete the Central Washington Family Medicine residency.

Pontarolo and Bulfinch cited a need for more doctors in Yakima as one of the main difficulties in practicing here. That need includes more specialists  to refer to and more  primary care providers to ease the strain on existing clinics.

To get more of its graduates to set up shop in the Valley or similarly rural, underserved areas, PNWU starts all the way back at the recruiting stage: It looks for students who grew up in or have ties to rural areas, and who indicate a desire to serve in underserved communities.

Dr. Ed Bilsky, the provost and chief academic officer, has only been in town for about seven months, but says PNWU’s recruitment model was one of the aspects that impressed him most about the school.

“The challenge for the Pacific Northwest is that there’s not a lot of residencies, so a number of our students have to go to the Midwest and East Coast to do residencies,” he said. “Many of them come back; that kind of makes sense, in that we heavily recruit from the Pacific Northwest in the first place and tend to attract the kind of student that wants to come back.”

Increasing the number of residency slots is a long-term problem with no easy solutions, as the number of slots is tied to Medicare funding and was effectively capped by Congress in 1997.

Placing students in small, rural communities during their third- and fourth-year rotations also can help show big-city natives that small towns have benefits, too, Bilsky said. The 16 rotation sites are spread throughout Washington, Oregon, Idaho, Montana and Alaska.

But, Watson said, the Northwest is making some progress; a state bill passed recently provides some state money to support residency development, which PNWU and the University of Washington are pushing for.

“It’s a slow process to convince hospitals to do it, and then recruit and get those programs moving ahead,” he said. “Only 2.6 percent of the whole number of residencies of the United States exist in these five states that we serve. At that rate, we’ll never have an equivalent of the residencies to meet the need in the area.”

The graduates who have gone on to practice here said one way PNWU could encourage more doctors to consider Yakima as a permanent choice is to offer more opportunities to engage with the community and feel a part of the town.

In exit surveys, many fourth-year students this year indicated a strong sense of mission in addressing the physician shortage by staying in primary care and training medical students on rotations in the future, Bilsky said.

He moved here from Spokane, so he has family not far away, he said, but the pull of the Valley was more about serving the community.

“I really felt the dedication of the mission, to help with the underserved and frankly to help with farm workers, as well,” Biscaro said. “That was one of the things I really enjoyed. ... To me it’s a very fulfilling role.”

Many of his patients don’t have easy access to medical care, he said, and he’s “happy to provide it.”

“And overall, the patients have been very grateful and happy, as well,” he said.

“I don’t see any changes in the foreseeable future. I do intend to stay here,” Biscaro continued. “It can be challenging at times, as is any job, but I do believe that the benefits and the fulfillment that I get from this job is well worth it.”

Annual car and bike show set for Aug. 19 in Prosser