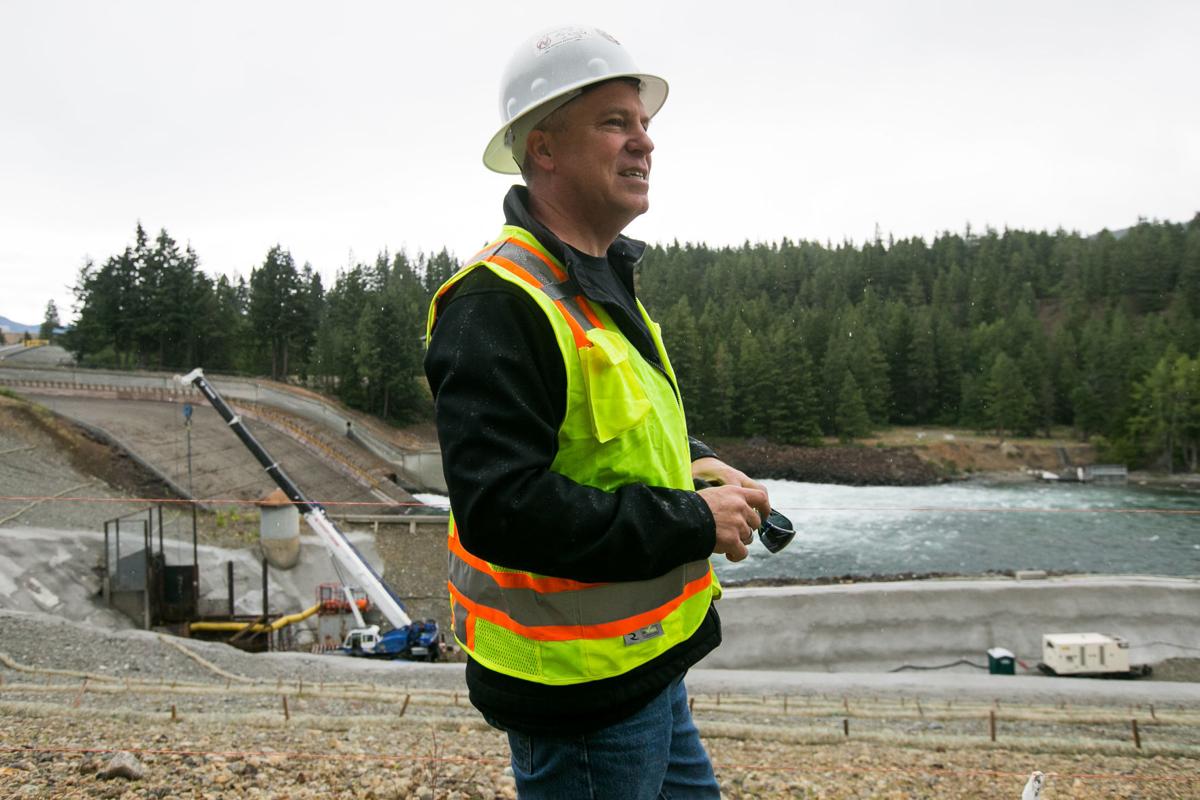 Richard Visser described the helix construction of the Cle Elum Fish Passage Facility project as similar in design to a big parking garage in Seattle. 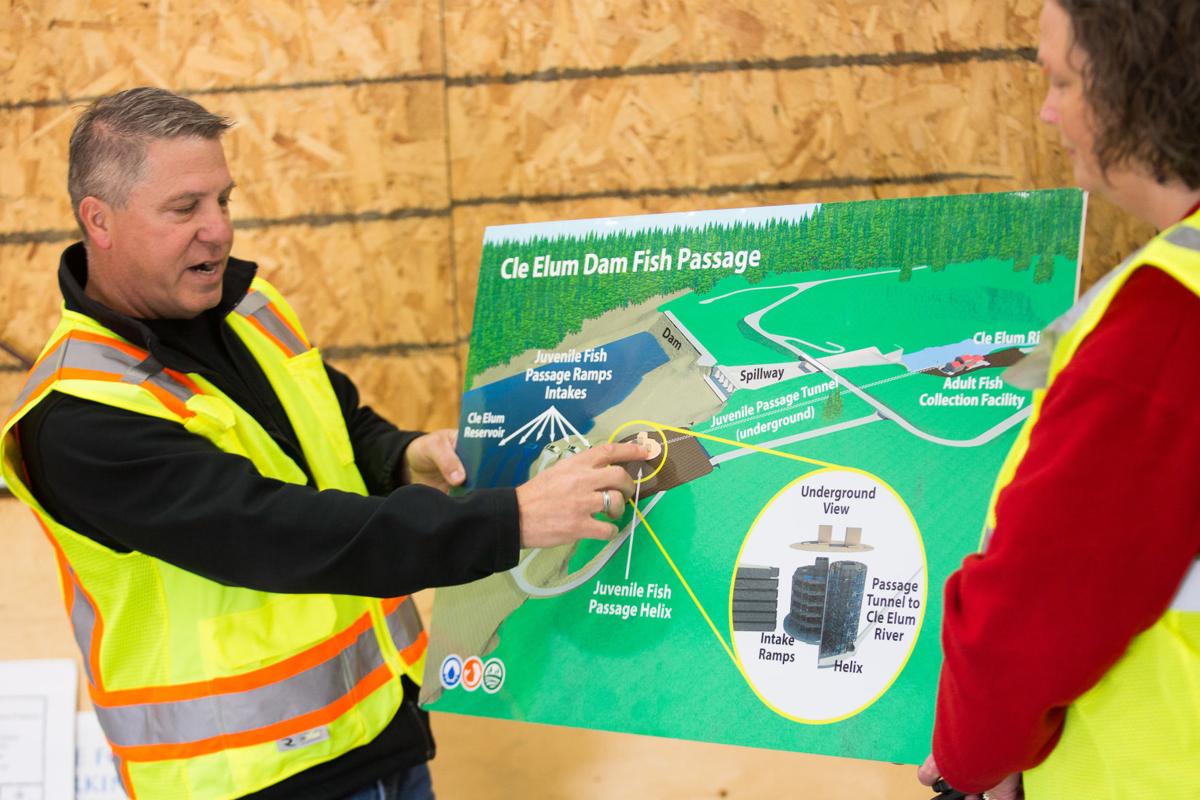 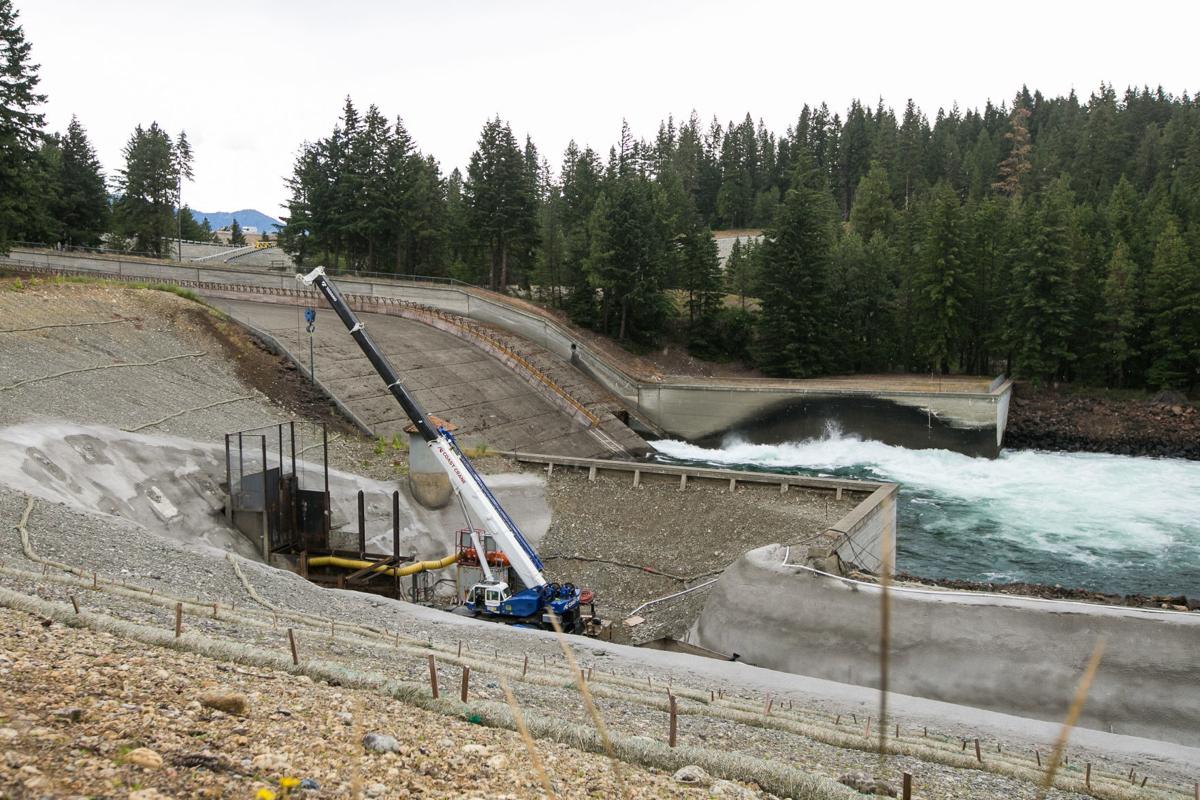 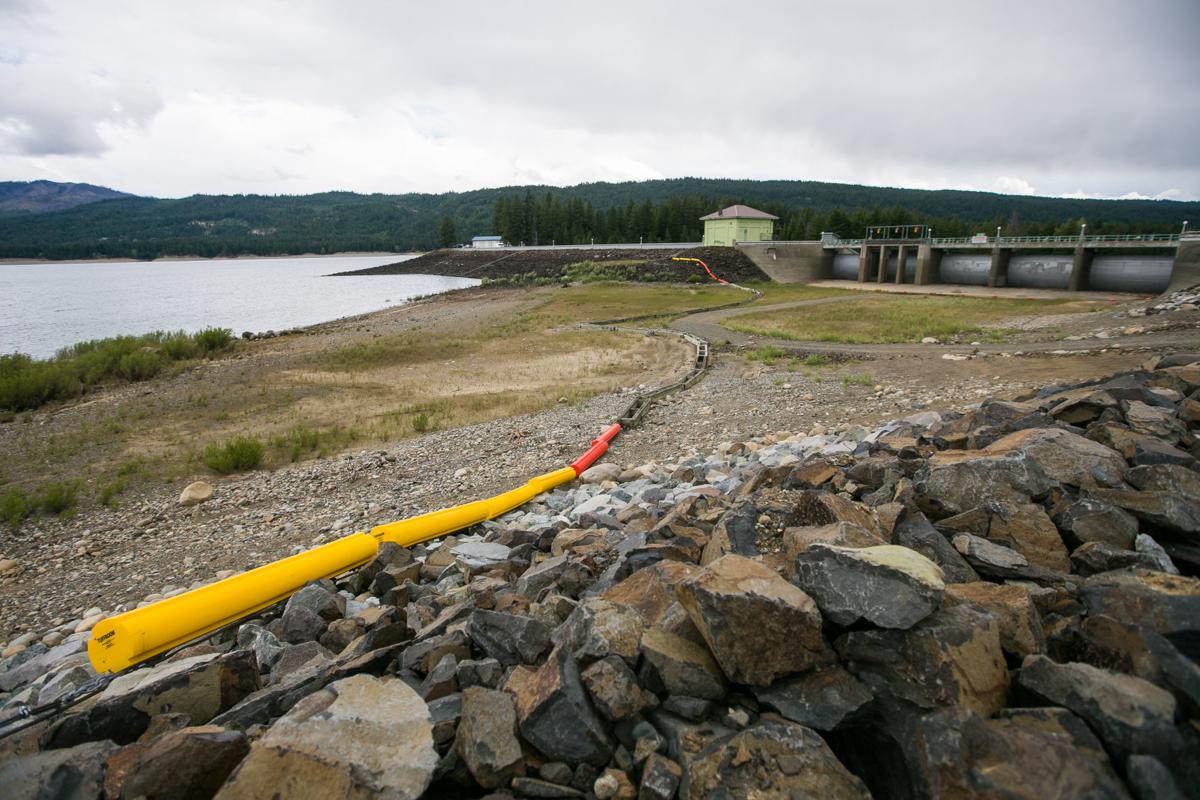 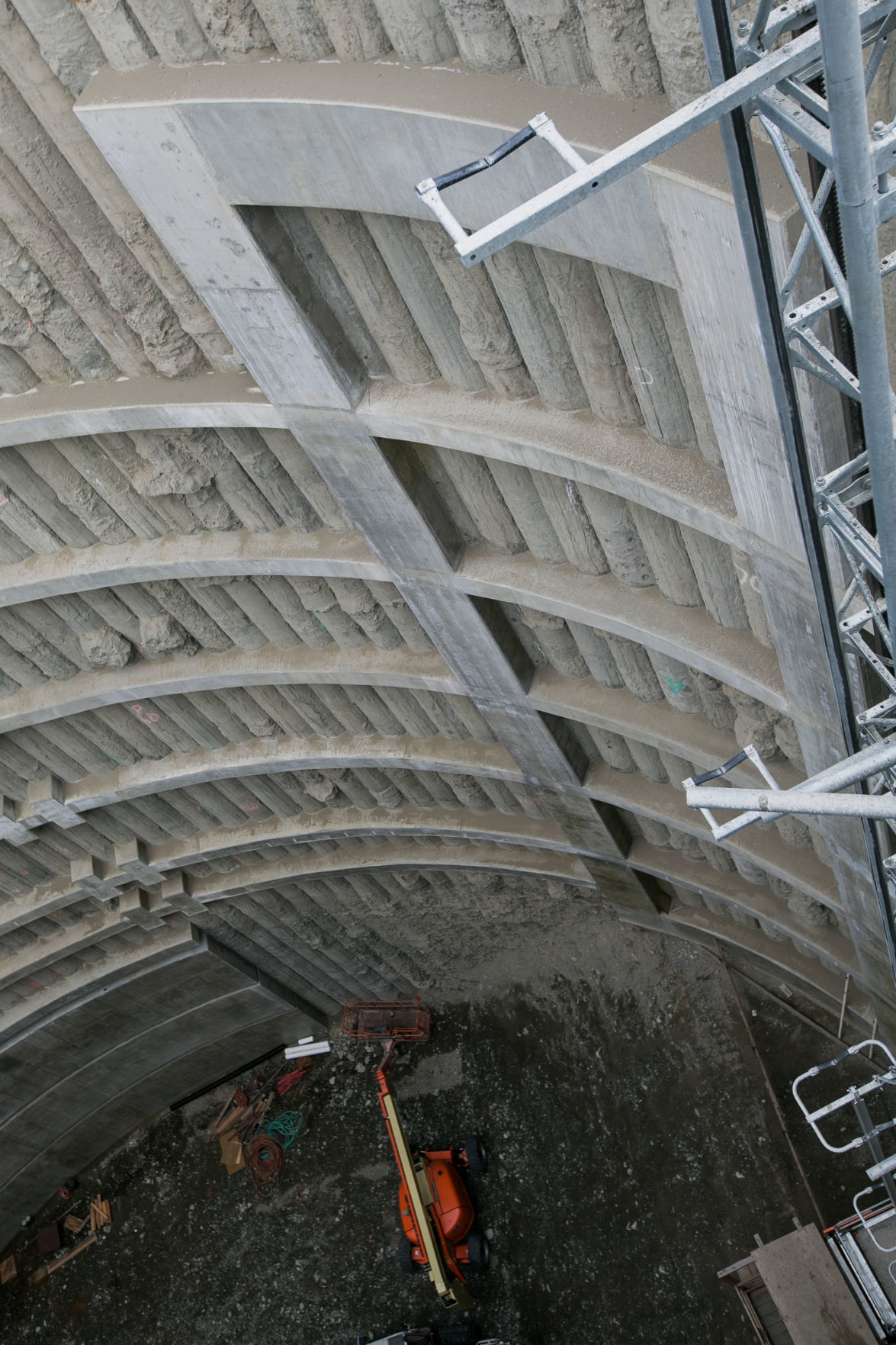 The intake frame along the walls of the Cle Elum Fish Passage project’s secant Thursday, June 27, 2019, in Cle Elum, Wash. The downstream fish passage facility is one of six reservoir projects outlined in the Yakima Basin integrated water management plan. 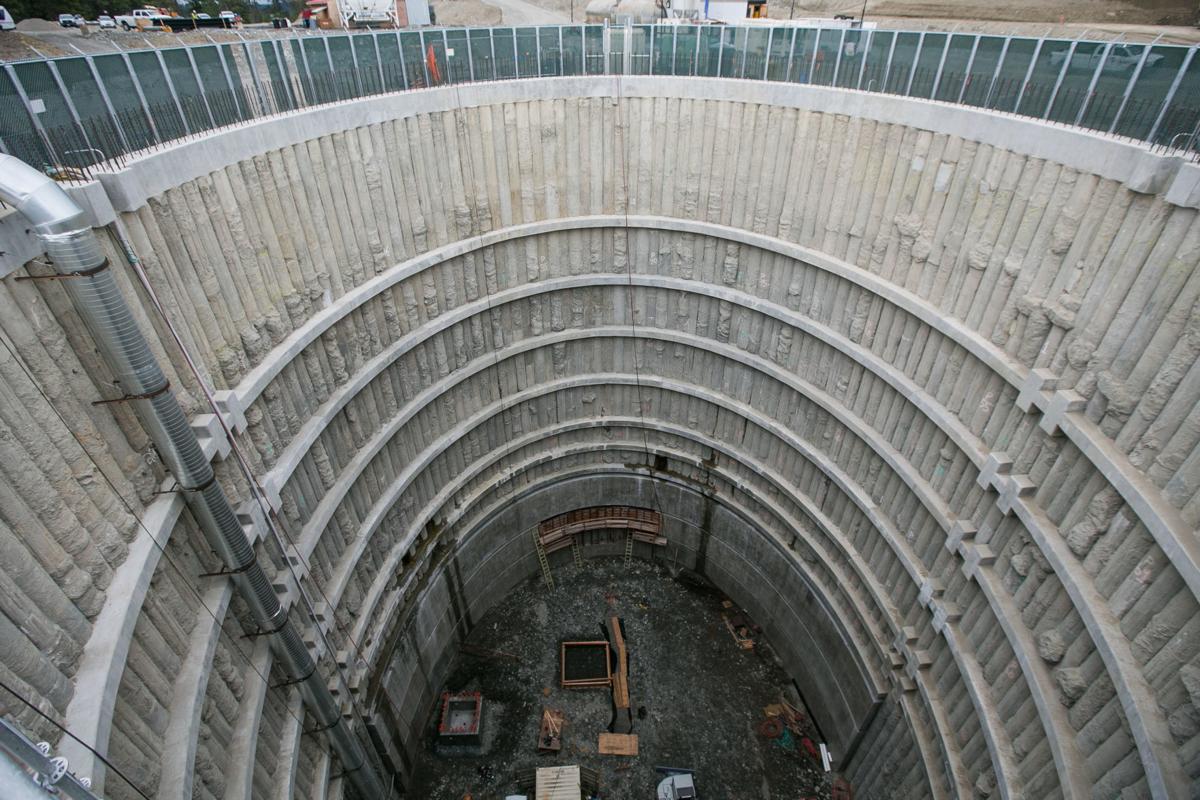 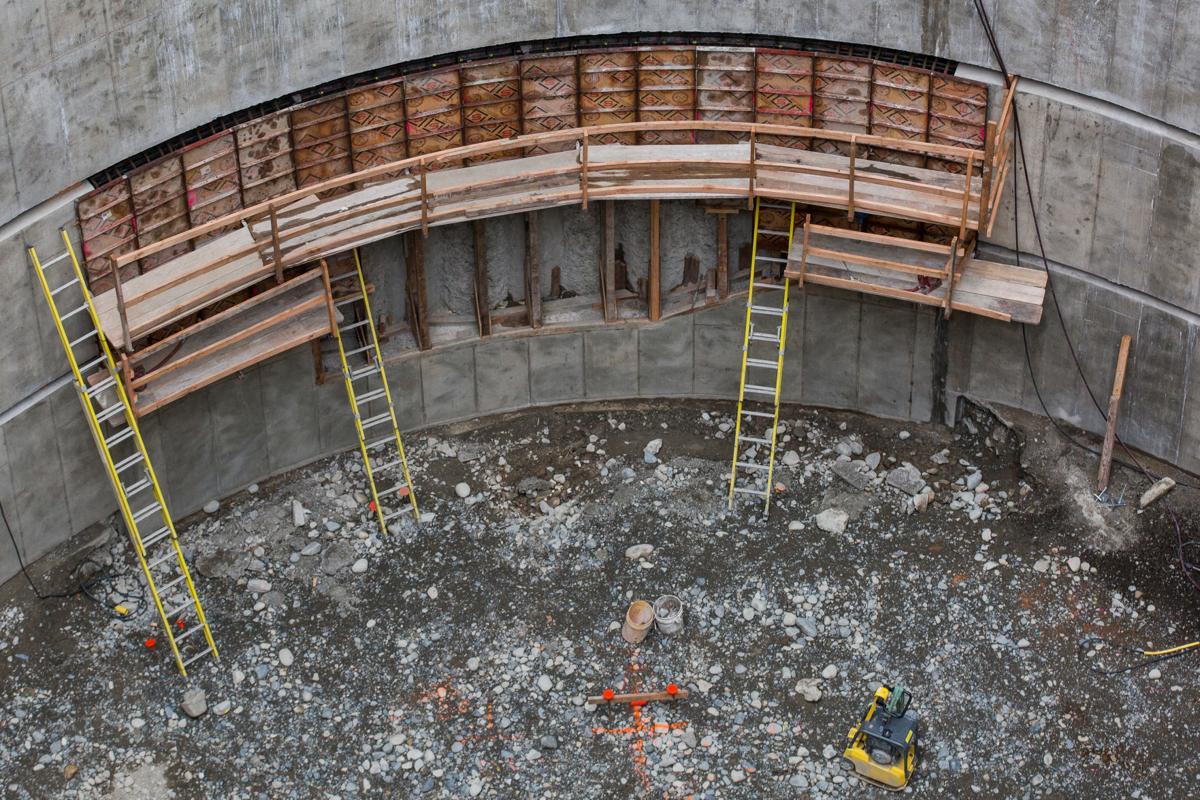 At the bottom of the Cle Elum Fish Passage project’s secant, wood panels are formed around a passage tunnel entrance point which will provide water flow to the Cle Elum River Thursday, June 27, 2019, in Cle Elum, Wash. The downstream fish passage facility is one of six reservoir projects outlined in the Yakima Basin integrated water management plan. 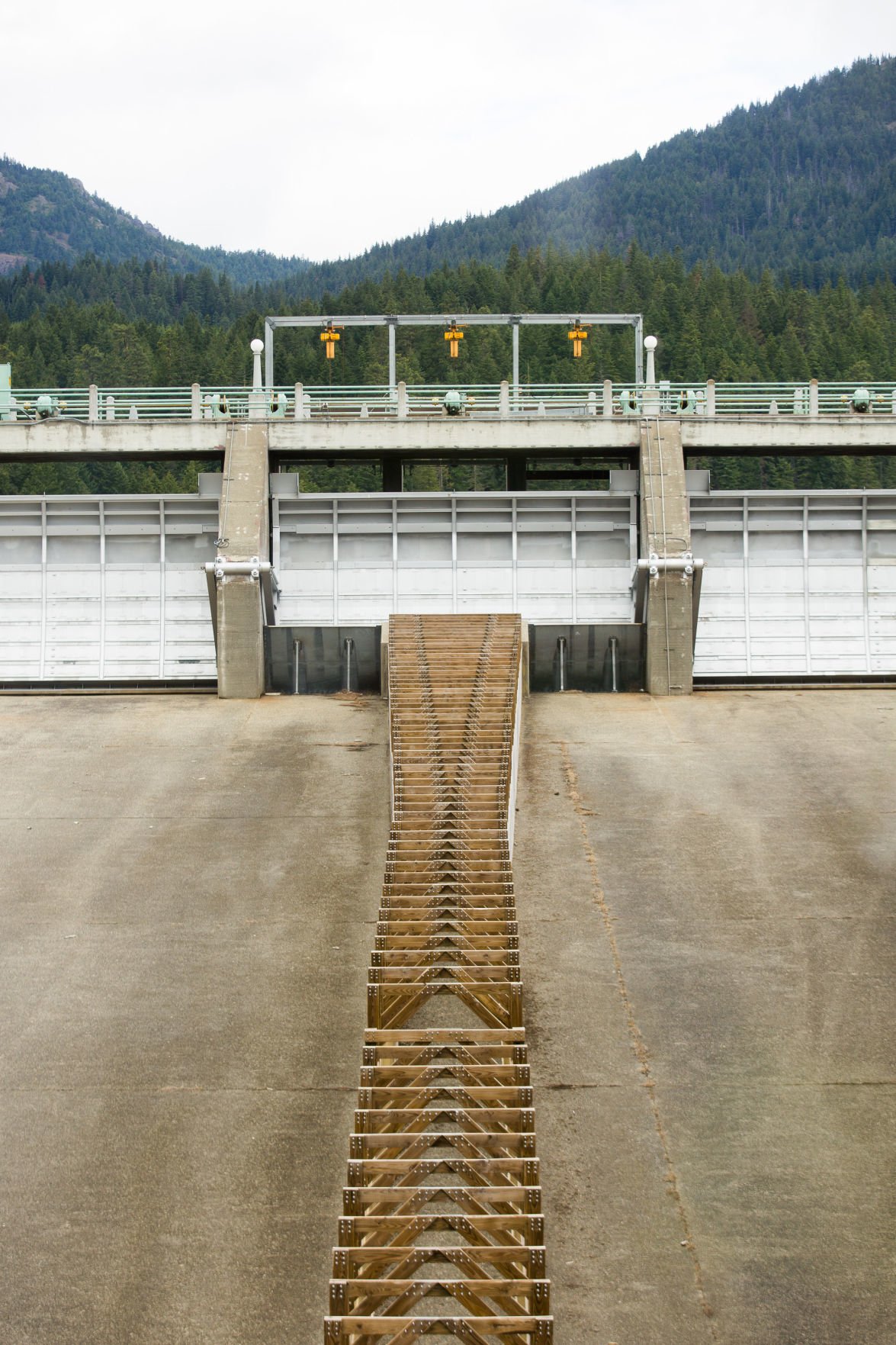 Richard Visser described the helix construction of the Cle Elum Fish Passage Facility project as similar in design to a big parking garage in Seattle.

The intake frame along the walls of the Cle Elum Fish Passage project’s secant Thursday, June 27, 2019, in Cle Elum, Wash. The downstream fish passage facility is one of six reservoir projects outlined in the Yakima Basin integrated water management plan.

At the bottom of the Cle Elum Fish Passage project’s secant, wood panels are formed around a passage tunnel entrance point which will provide water flow to the Cle Elum River Thursday, June 27, 2019, in Cle Elum, Wash. The downstream fish passage facility is one of six reservoir projects outlined in the Yakima Basin integrated water management plan.

A white SUV pulled up to a gravelly stop in front of the entrance to the Cle Elum Reservoir, and a man wearing a NorthFace jacket got out. He ambled over to a Bureau of Reclamation employee wearing a hard hat and a neon orange vest.

“You look like someone who knows what’s going on,” the man said. “Is there any good place to unload a bunch of kids who want to see the dam?”

The Reclamation employee in the vest — Richard Visser, of the Pacific Northwest Region Columbia-Cascades Area Office — thought for a moment.

“No,” Visser said. “This is an active, hazardous construction site.”

But within years, officials hope the site will provide a safe harbor and spawning ground for the fish stocks that once inhabited the lake in abundance: sockeye, coho, and spring chinook salmon, Pacific lamprey, upper Middle Columbia River steelhead and bull trout.

The facility, once complete, will help restore biodiversity and natural production of salmon and other fish species in the upper Cle Elum subbasin. It will also help reconnect isolated populations of bull trout.

Beyond the two men, a contracted crew operated a giant drill, boring into the soil, making room for the concrete that would be siphoned down to stabilize the earth for a fish passage tunnel. In the foreground, the visitor was interested. He asked about the kind of fish passage being used and rattled off a short list of possibilities.

Not only is the project at Cle Elum Reservoir the first major fish passage facility undertaken in the water plan, it’s also the first project in the state to use the innovative, custom-designed “helix” architecture.

Visser described the helix construction as similar in design to a big parking garage in Seattle, a description the man accepted before returning to his SUV to look for a hiking trail in the surrounding forest.

As they spoke, the drills continued boring in the background, taking the massive $200 million project one day closer to completion, a date anticipated, at the earliest, for 2023 or 2024.

A bus carrying about 20 employees from the Washington Department of Ecology, the Washington Department of Fish and Wildlife and the Yakama Nation also stopped at the site. Tom Tebb, the director of the Office of Columbia River for Ecology, said staff take an annual field trip away from their offices, with the piles of paperwork that inform project plans, to see the project sites for themselves.

Visser gestured at a colorful cutout as he explained the schematics of the Cle Elum fish passage to the group.

Juvenile fish first enter a series of tiered intake gates, which span a vertical height of about 64 feet to accommodate for differing water levels in the reservoir. Once juvenile fish swim into the intake gate, they are channeled through the helix structure to an underground passage tunnel, which connects the fish to an adult fish collection “trap and haul” facility — so called because adult fish will then be hauled, via truck, for release into the Cle Elum Reservoir or upstream tributaries.

The helix design emerged after intense collaboration with Reclamation’s Hydraulics lab in Denver, with staff considering more than 15 computer-generated designs before deciding the helix would be most effective, while also minimizing turbidity during passage, which can hurt fish.

“We hope the helix will teach us a lot, so that we can take away some concepts as we work on the next reservoir projects,” Visser said.

After ensuring everyone was wearing appropriate safety gear, Visser led the group out to the site, stopping first at a wood bypass temporarily used for fish passage. He explained that Reclamation had not been able to use the bypass this year because the reservoir levels were too low, and staff won’t release fish after June because the temperature in the Yakima River becomes too warm for their survival.

“That shows the importance of this new facility,” Visser said, adding that if the new facility were in place, “we would have been able to pass fish for about a month.”

The 6,155-square-mile Yakima River Basin is historically second only to the Snake River in supporting Columbia Basin salmon and steelhead runs.

But dam construction at four natural lakes — in the form of private timber crib dams in the early 1900s, which were replaced by Reclamation storage dams starting in 1910 — cut off multiple stocks of fish from fertile spawning ground.

For sockeye salmon, the dams equaled extinction in the area.

Agreements with WDFW and the Yakama Nation in 2002 and 2006 prescribed evaluation for possible fish passages at six sites, including a mandated passage at Cle Elum Reservoir, to improve aquatic conditions for existing stocks in the reservoir. Cle Elum became Reclamation’s No. 1 priority because the site has the largest habitat — with 29 miles of streamflow and the most stocks of fish among the sites.

Reclamation decided on the current design, including both the juvenile passage and the adult passage structures on the opposite bank, as the preferred alternative in August 2011.

Funding for the project is split 50-50 between Reclamation and Ecology. Washington state provided $8.8 million for the final design of the fish passage facilities, which Reclamation completed in 2015.

Tebb said that an important development this year came when President Donald Trump signed into law the John D. Dingell Jr. Conservation, Management and Recreation Act in March — which built on the 1994 Yakima River Basin Water Enhancement Project and authorized key elements of the plan for the first 10-year segment.

In April, the Legislature approved $40 million capital budget funding for the Yakima Basin integrated water plan, of which $18.9 million will go toward Cle Elum Dam projects.

Reclamation awarded a $75.9 million contract to Garco Construction Inc. of Spokane in 2018 to complete the tunnel construction work. Five other contracts also were awarded for the project.

Completed construction to date includes installation of the tunnel portal and grading needed for boring operations. Construction of the intake, gate, and helix also started this spring.

Michael Garrity, a Columbia River and water policy manager at WDFW, said the improvements are especially important for sockeye, which require a lake to rear in as fry.

“The Yakama Nation and other agencies working in fish recovery have been working to return fish for decades,” he said. “When you look at the fish populations made possible with full implementation of this plan, it’s a big deal to everyone who cares about salmon.”

The Yakama Nation and WDFW also are responsible for reintroducing fish stocks, including sockeye and coho salmon, to accelerate salmon repopulation in habitats above the Cle Elum Dam.

The two entities worked with the U.S. Geological Survey to track 20 adult sockeye to understand migration patterns between the Roza and Cle Elum dams, with promising results. All 20 of the adult sockeye reached the base of the Cle Elum Dam and relatively quickly. Staff plan to conduct another sockeye tracking study in the lower Yakima River this summer.

Mark Johnston, a research scientist who has worked for the Yakama Nation Fisheries for more than 30 years, said the studies will allow staff to enumerate the fish in the upper river and determine survival rates for adults.

Sockeye salmon have historically been important to tribal people who used to fish near the reservoir because sockeye came in the fall and preserved well for trading, bartering, food, and celebrations, Johnston said.

The Cle Elum Pool Raise is another project underway to help with fish recovery. Staff ultimately will add three feet of height to radial gates already in place, which will allow for an additional 14,600 acre-feet of water for Yakima River instream flows.

That increase will improve aquatic resources for fish habitat, rearing and migration in Cle Elum and the upper Yakima River, said Richard Visser, of the Pacific Northwest Region Columbia-Cascades Area Office of the Bureau of Reclamation.

“They’re separate projects but related,” Visser said. “We can manage those flows when we want to aid migration, and the fish will benefit.”

Reclamation noted that the additional acre-feet of water will be used only to improve habitat for fish, not for irrigation purposes. The project will not otherwise impact the irrigation cycle.