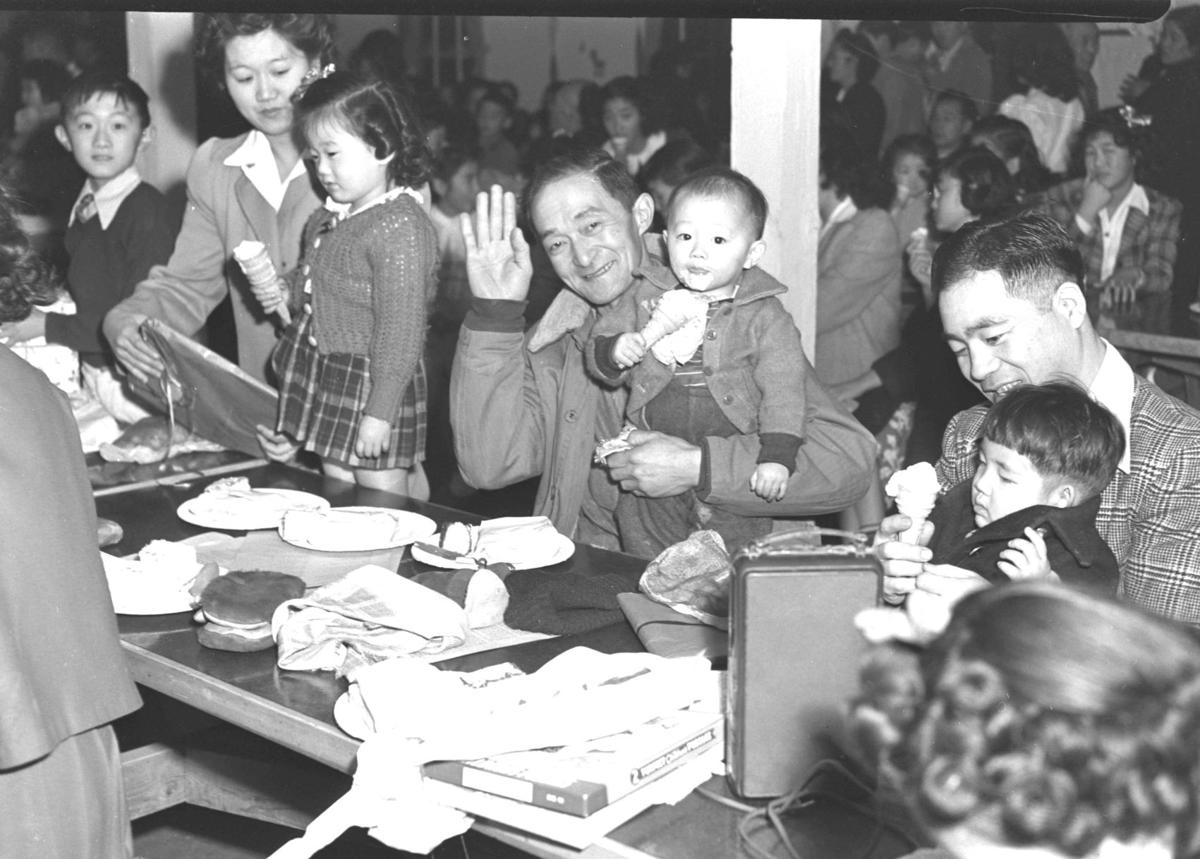 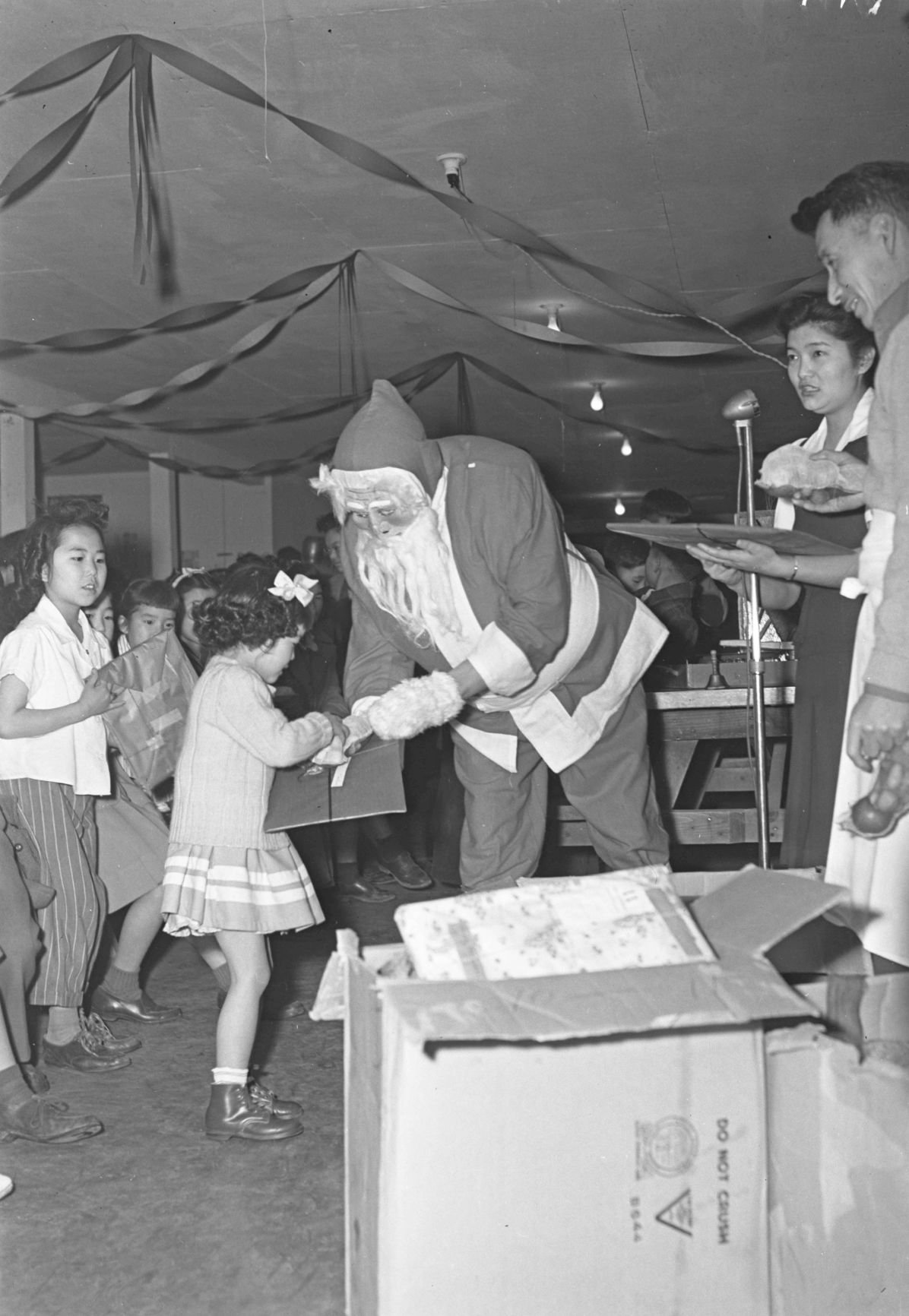 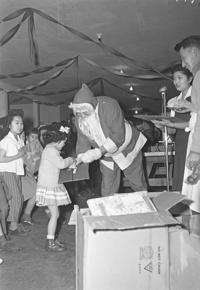 Santa Claus (Mike Hide) is shown giving gifts to children, from a box, with announcers Toshiko Harada and Joe Honda inside of the Mess Hall 15-30 for the Block 15 Christmas party on Dec. 25, 1944 in Heart Mountain, Wyoming. (Photo Courtesy of the George and Frank C. Hirahara Collection Washington State University Libraries Manuscripts, Archives, and Special Collections) 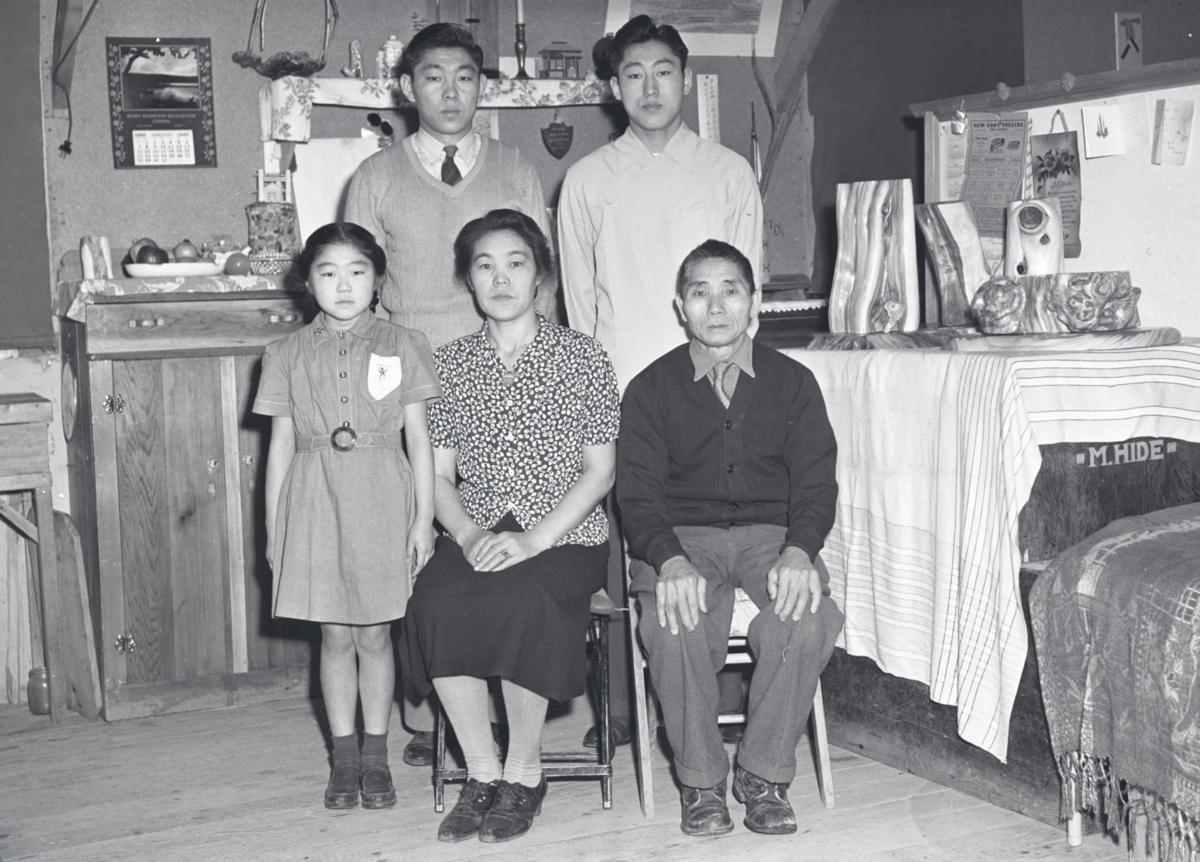 Santa Claus (Mike Hide) is shown giving gifts to children, from a box, with announcers Toshiko Harada and Joe Honda inside of the Mess Hall 15-30 for the Block 15 Christmas party on Dec. 25, 1944 in Heart Mountain, Wyoming. (Photo Courtesy of the George and Frank C. Hirahara Collection Washington State University Libraries Manuscripts, Archives, and Special Collections)

YAKIMA, Wash. -- Familiar phrases rang out during a holiday concert in 1942 at the Heart Mountain Relocation Center in Wyoming as Fukiko Takano read “Christmas Bells” by Henry Wadsworth Longfellow.

“Then pealed the bells more loud and deep:

‘God is not dead, nor doth He sleep;

The Wrong shall fail,

With peace on earth, good-will to men.’”

With that, Takano — a young woman whose family ran the Empire Hotel in downtown Yakima’s bustling Japan Town district — ended her recitation of the beloved holiday poem, one of several features of the Dec. 22 evening concert.

The concert featured a chorus of 100 voices singing “O Come All Ye Faithful,” “The First Noel” and “White Christmas” along with solo performances, singing by the Merrie Meddlers and other groups and a woman who accompanied singers with bells, as advanced by the Heart Mountain Sentinel.

Takano and fellow members of the Yakima Valley’s Japanese community who were imprisoned at Heart Mountain were trying to keep life as normal as possible during the holiday seasons of 1942, 1943 and 1944 despite the barbed wire and guard towers surrounding them. And though approximately 75 percent of the Valley’s Japanese communities were Buddhist, many still celebrated Christmas with festive decor and gifts during their incarceration.

Kara Matsushita Kondo of Wapato recalled the time she and her younger sister, Marjorie, singing Christmas carols for camp residents and staff — including the guards in the nine towers.

“I was adviser to a high school girls group called Hi Jinks. ... We went out caroling and we went to the guard towers ... I can just picture how cold it was and the frost glistening on the barbed wire,” Kondo remembered in an oral history video recorded by Densho.

“And this poor voice, almost choking with tears, said ‘thank you.’ How lonely he must have been up there,” said Kondo, who died in 2005.

Along with guard towers staffed with armed military police and outfitted with high-beam searchlights, the 46,000-acre camp at Heart Mountain included 468 barrack-style buildings sectioned into 20 blocks that served as administration areas and living quarters.

Built of rough wood and roofed with tar paper, each barracks contained apartments heated by cylindrical stoves that burned coal. Residents had to haul their own coal, which meant many trips out into the harsh Wyoming winters.

But in the weeks just before Christmas, the camp’s austere structures and sparse interiors became a little brighter as Christian and Buddhist residents alike anticipated a holiday that some celebrated as religious, others as secular.

Christmas trees were distributed to mess halls, the administration area, USO, schools and other buildings at Heart Mountain. Children made popcorn strings and paper ornaments to decorate them.

Gifts were delivered to Heart Mountain from throughout the U.S. every holiday season. Some came from the Yakima Valley; Takano has fond memories of her Yakima High School teachers who wrote to her and other students while they lived at Heart Mountain.

“And not only that, they sent us fruit when the holidays came ... apples and peaches. They would send us crates we would share with people in the camp,” she recalled.

Children also anticipated presents from their parents and, of course, visiting with Santa. Approximately 4,000 camp youth age 18 and under enjoyed Christmas during the second annual block parties in 1943.

And in the holiday season of 1944, all camp residents celebrated the news they had long hoped for — the lifting of the Army’s ban against people of Japanese ancestry on the West Coast.

“After two and a half long, trying years America’s children of Japanese ancestry and their aged, law-abiding parents have been vindicated and soon will be able to enjoy the privileges and freedom of all other citizens regardless of race, creed or color,” said the Heart Mountain Sentinel editorial on Dec. 23, 1944, titled “The Greatest Gift: Freedom.”

“The world is brighter this Christmas. The barbed wire fences, the guard towers, the suspicion soon will be forgotten and let us hope that no other Christmas will find any part of America’s children held behind barbed wire fences simply because they had the wrong ancestors.”

• “Land of Joy and Sorrow: Japanese Pioneers of the Yakima Valley” continues at the museum, which is located at 2105 Tieton Drive, Yakima. Visit www.yakimavalleymuseum.org.

• Find copies of the December 1942, 1943 and 1944 issues of the Heart Mountain Sentinel, courtesy of the Densho Project, here: http://ddr.densho.org/ddr-densho-97/objects/

On Feb. 19, 1942, President Franklin D. Roosevelt signed Executive Order 9066. This order made it legal to remove people from military areas “as deemed necessary or desirable.” Though the Yakima Valley was outside Military Area No. 1, the boundaries were moved east to include it.

Evacuation of the Yakima Valley’s Japanese-American residents took place June 4-5, 1942. A total of 1,017 men, women and children — 683 of whom were born in the U.S. — were transported to the Portland Assembly Center, where they stayed for about three months. They then were taken to Heart Mountain, Wyo.

Only about 10 percent returned to the Valley.