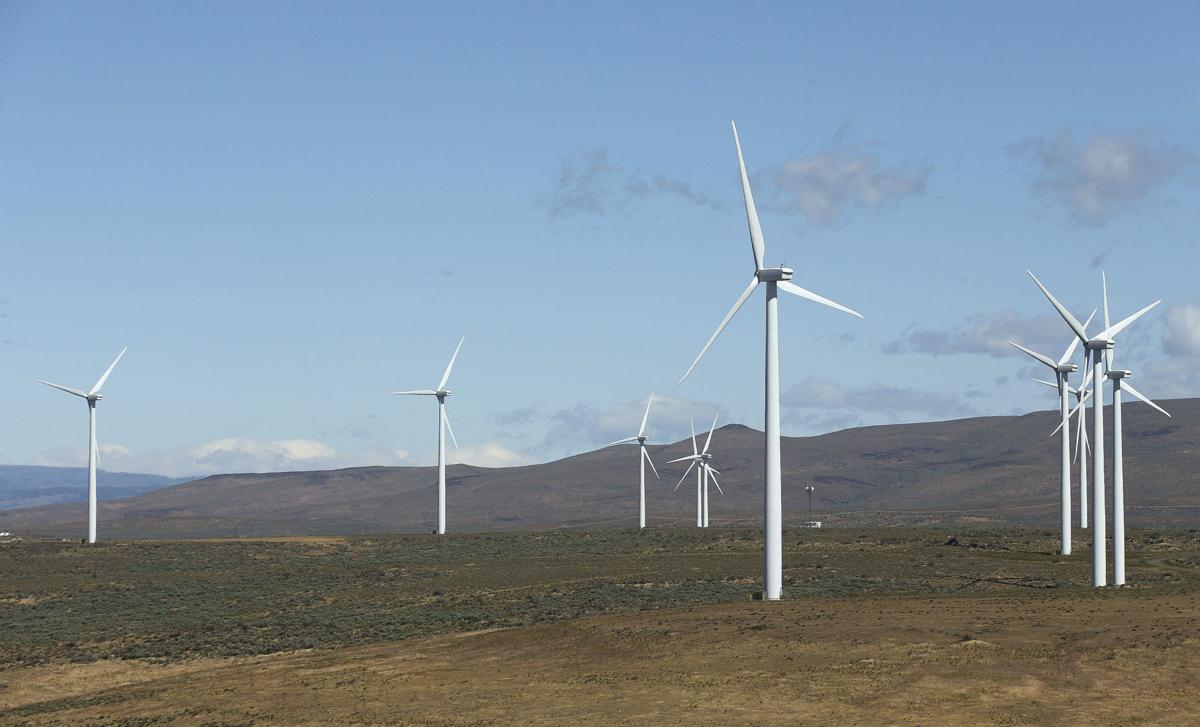 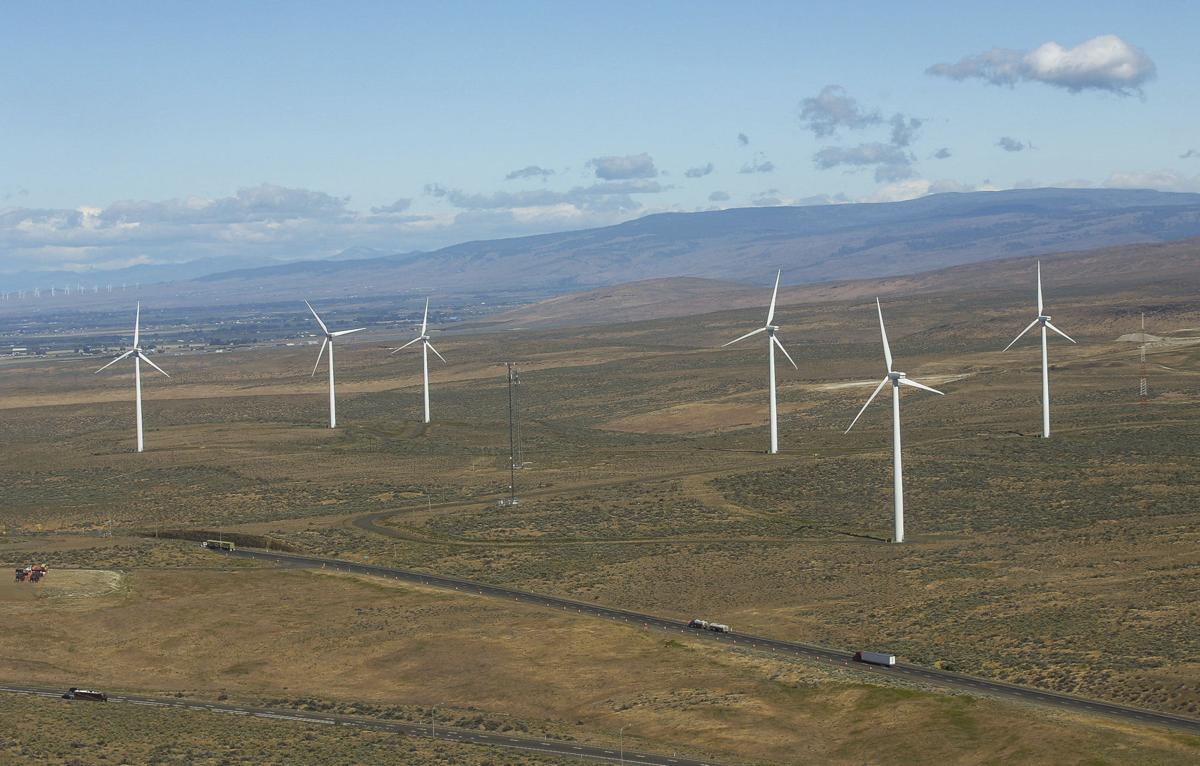 As Gov. Jay Inslee pushes for carbon-free and renewable energy in the state, several projects are either underway or already producing electricity in Central Washington.

While wind turbines dot the ridges of Kittitas and Klickitat counties, Yakima County officials are supporting plans to generate natural gas from biowaste. Meanwhile, a solar energy farm is being developed in Sunnyside.

“We are conducive to promoting green energy, which is why we are funding something that is cutting-edge with natural gas,” said Yakima County Commission Chairman Mike Leita.

However, the state’s efforts to get solar energy farms built on state land east of Moxee have sparked a little interest but no concrete offers, a state official said.

Inslee, who has made climate change a keystone issue in his bid for the presidency, recently signed a law requiring 100 percent of the state’s electricity to come from clean energy sources by 2045. The law would require utility companies to drop electricity produced at coal-fired plants outside the state by 2025 and go to carbon-neutral energy production by 2030.

Central Washington is already producing electricity from renewable sources, such as wind and hydropower.

The Grant Public Utility District operates the Priest Rapids Dam, which is partially located in Yakima County. The electricity its powerhouse generates goes to Grant County.

Wind turbines in Kittitas and Klickitat counties, take advantage of the winds that blow down from the Cascades and the Columbia River Gorge.

Not everybody’s a fan of the turbines, though. Sen. Curtis King, R-Yakima, complained on the Senate floor earlier this year about having to see the turbines as he drove through his district and questioned why they couldn’t be put on the other side of the Cascades.

“These environmentalists tell you that you can’t take this beautiful valley, this beautiful gorge and mess it up if you take a road through it or build a dam,” King said in a phone interview. “But you can put in all these turbines, which affect the aesthetics.

But there are a few factors that go into placing turbines, such as how consistent wind is in the area and access to power transmission lines.

More than 10 years ago, Yakima County was considered for a wind farm. Madden Wind Farm, as the project was called by Washington Wind, would have called for building a string of turbines on Rattlesnake Mountain between Sunnyside and Prosser.

While the project would have brought $400 million to Benton and Yakima counties during a 20-year period, it was scrapped in 2004 when Benton County officials expressed concerns about how it would affect local elk populations, as well as concerns that vibrations from the turbines would interfere with the sensitive <a href="https://www.ligo.caltech.edu/WA">Laser Interferometer Gravitational-Wave Observatory near Hanford.

In Klickitat County, Rye Development is in the process of developing a system to store energy from the wind turbines near Goldendale. The plan calls for using surplus energy to move water from a lower reservoir to a higher one on a ridge south of Goldendale and releasing the water back through a hydropower turbine when extra electricity is needed.

Rye Development and National Grid Ventures, its partner in the project, were accepting public comments on the plan in May.

One resource Yakima County has in abundance is sunshine, and the emphasis here is on attracting solar energy companies.

The state Department of Natural Resources opened two parcels of land 15 miles east of Moxee for use as a solar energy farm. The state has already leased 480 acres of land near Bickleton for use as a solar farm, but the Moxee property has only attracted inquiries so far, DNR spokesman Joe Smillie said.

There are plans for a solar energy project at the old Monson Family feedlot near Sunnyside. The state Department of Commerce awarded a $500,000 grant to OneEnergy Renewables for its project, which is in the early stages of development.

Blake Bjornson, OneEnergy’s manger of project development, said the goal is to have the 2.99-megawatt farm operating by the end of 2021, a timetable dependent on hooking into Pacific Power’s electrical grid.

He said there is also potential to expand the project at the site, which he said has been vacant for several years.

“It’s an exciting renewal,” Bjornson said of the project bringing activity back to the feedlot property.

Jonathan Smith, executive director of Yakima County Development Association, said the county is also supporting efforts to turn sewage waste and cow manure into natural gas that can be used to generate electricity or provide heating.

Yakima County is soliciting bids to build a natural gas pipeline at DeRuyter Dairies, which has been using a digester to capture methane given off by cow manure to generate electricity. In 2014, Promus Energy was awarded $1.4 million in funding from the county’s Supporting Investments in Economic Development in 2014 to develop the energy project.

Smith said the project is expected to move forward this year, after delays due to issues with investors.

The Port of Sunnyside is also developing plans and seeking economic-development funding to take methane generated from its sewage treatment plant to generate electricity for the site, as well as sell gas and electricity to Ostrom’s Mushrooms, Smith said.

Ostrom’s is closing its farm near Lacey at the end of the year and shifting operations to a new plant in the Port of Sunnyside, The Olympian reported.