U.S. Census officials have been predicting that white Americans will no longer make up a majority of the nation’s population in the next quarter-century.

Yakima County has already crossed that threshold, as Latinos now represent 50.7% of the population, according to data from the 2020 Census.

Gabriel Muñoz, an activist who works with the Latino community, said the shift, while not a surprise, represents an opportunity for the county to plan for a future that harnesses the strength of this growing part of the community.

“We have to create a vision of where we’re heading and a plan for moving forward,” Muñoz said. “It’s something we have to look into as we serve our community and engage in the Latino community from different perspectives.”

County commission Chairman Ron Anderson agrees that the shifting demographics will change the county’s dynamics over time, but he doesn’t anticipate any major effects in the short term, particularly on the political front. 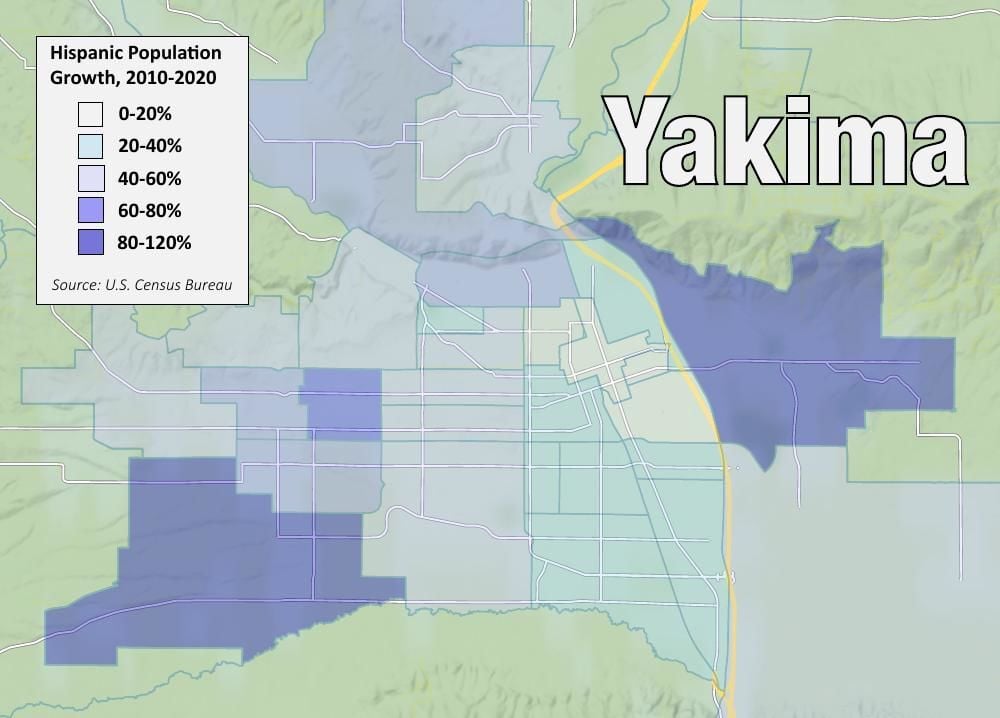 “It comes down to how many are of voting age and actually are registered to vote,” Anderson said. He said it will likely require more Latinos to become politically organized to make a difference.

However, it is in the numbers by ethnicity where the shift becomes more dramatic.

The number of residents who identified themselves as white dropped by almost 20%, going from 63.7% to 48.5% of the total population, according to the Census data. At the same time, the number of those identifying as Latinos increased 18.8% in the past 10 years, moving from 45% to 50.7%.

In terms of raw numbers, the communities that saw the largest increases in their Latino populations were Yakima, with 9,405; Terrace Heights, with 1,273; Union Gap, with 997; and Selah, with 751.

Yakima also saw its white population experience the largest decline, with 5,311 fewer in the 2020 census. The Summitview area, Terrace Heights, Moxee, Tampico and Cowiche were the only communities in the Valley where the white population increased, with 712, 584, 170, 82 and 5, respectively.

Muñoz said Terrace Height’s Latino growth was a bit of a surprise, but overall, he said the numbers were expected and could possibly be more than the census reports.

“There are a lot of people out there who don’t want to be counted, some because of their legal status, or people who are more shy,” Muñoz said.

Likewise, Anderson said he could see the shift toward a Latino majority coming. The Sunnyside and Grandview school districts, Anderson said, are already considered majority-minority.

But Anderson, who said he was still reviewing the numbers, said the demographic shift may not show up right away in local politics or the economy.

While the total number of Latinos has increased, Anderson said he wanted to see how that translated into registered voters. And there is also the question of how well they could be organized to put Latino candidates in office.

It was a similar claim made against the Yakima City Council that ended with the city making court-ordered changes to its elections.

Politically, Anderson said people may be surprised to find that the Latino bloc is not the monolithic liberal-moderate group they believe it to be.

Muñoz said there have been political changes already. At one time, the Yakima City Council had three Latina members, including the city’s first Latina mayor, Avina Gutierrez.

The shift in population also means an increase in economic power, with more Latino business owners, as well as more Latinos who are spending money.

“One of the things people are not talking about is the buying power of Latino people,” Muñoz said. “It is increasing every 10 years. Pretty soon, the Latino community is going to have a strong financial position in the community, and it is important that the businesses and government community see where it is moving and how we can get in front of it.”

Latinos want the same thing everyone else does, Muñoz said.

“We have a Latino culture, but we love our country. We always look out for the safety of our kids,” said Muñoz, an Army veteran.

Yakima County is proposing the new district boundaries outlined in a voting rights settlement be contingent on who wins this year's commissioner race, according to court records. The county wants to change the map if Autumn Torres is elected to keep her in District 3, according to a court motion submitted by plaintiffs.

Alaska Airlines to offer one arrival, one departure daily between Yakima and SeaTac