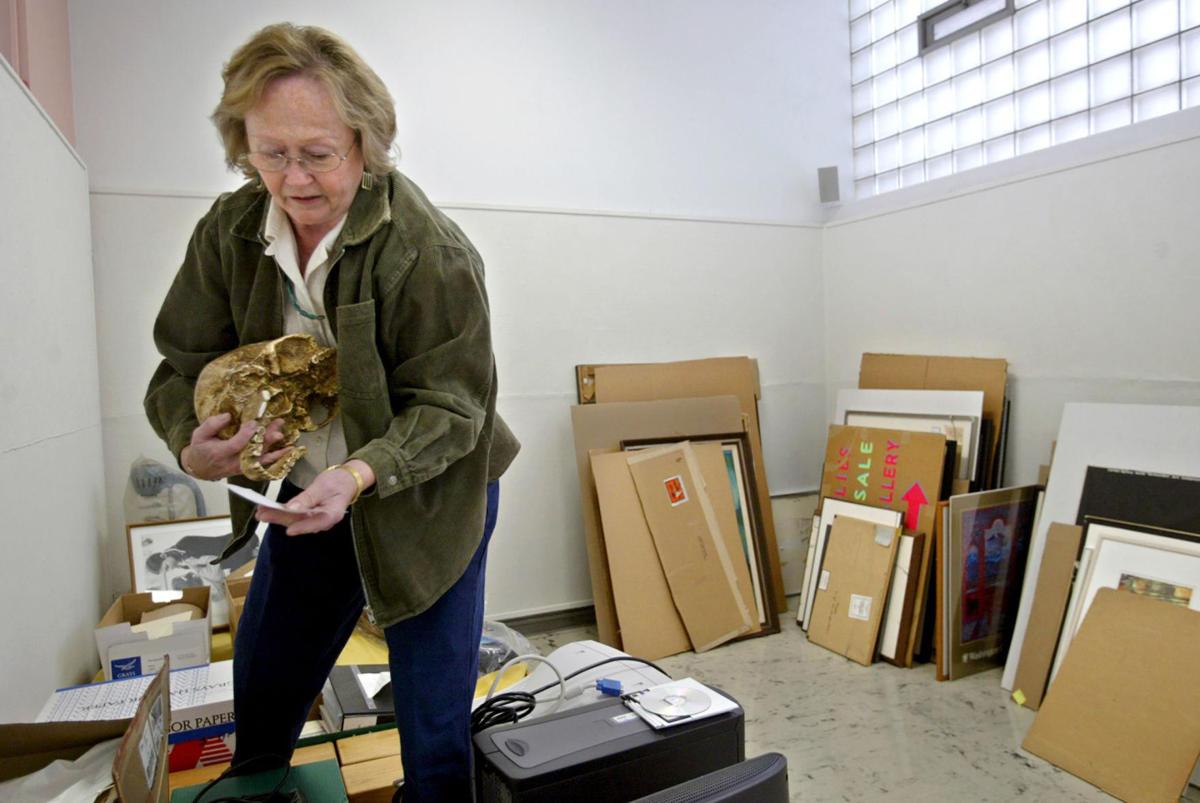 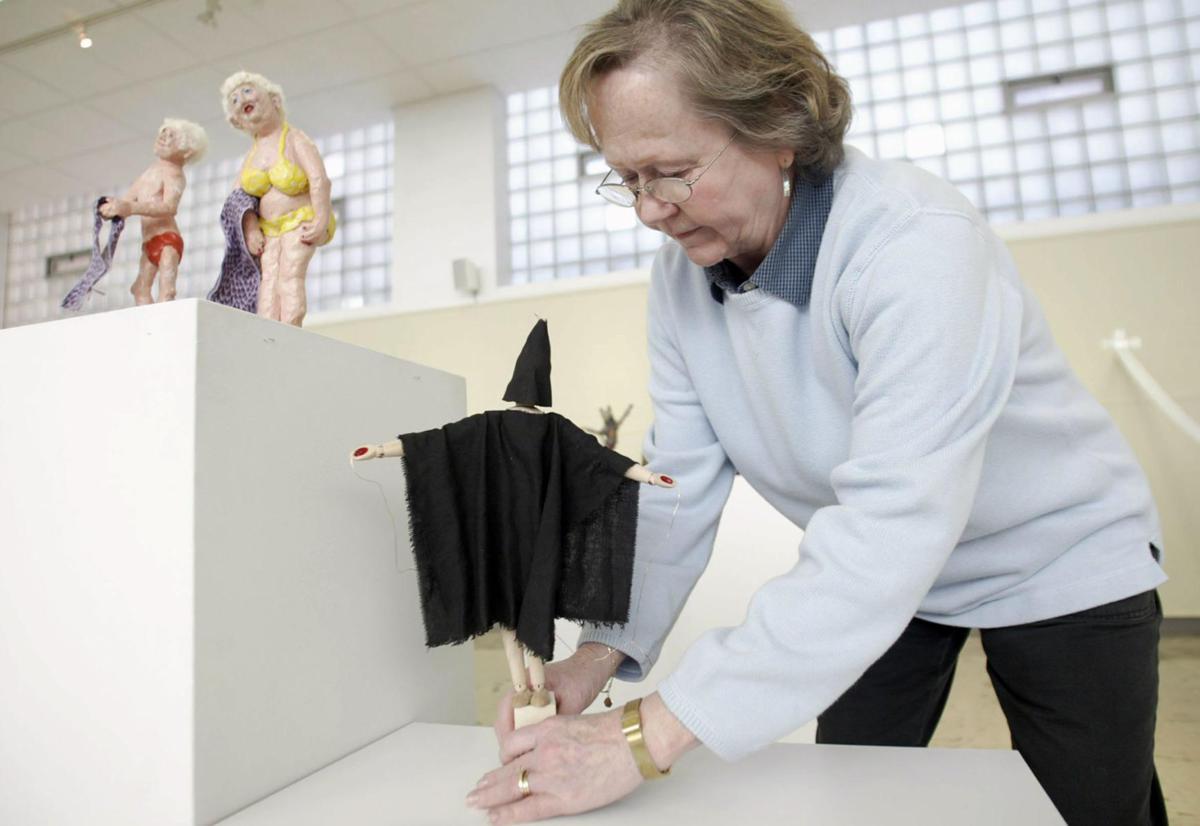 FILE—Carol Hassen, director of YVCC's Larson Gallery, places a piece titled "Freedom On the March, Haj Ali, 2004" by artists Andy and Peg Granitto, as she and other volunteers set up for the art show "Figuratively Speaking" on Tuesday, February 22, 2005. The show features more than 100 identical small mannequins transformed into individual works of art by area and national artists. After four days on display, the artwork will be auctioned off using a combination of silent, live and internet auctions. 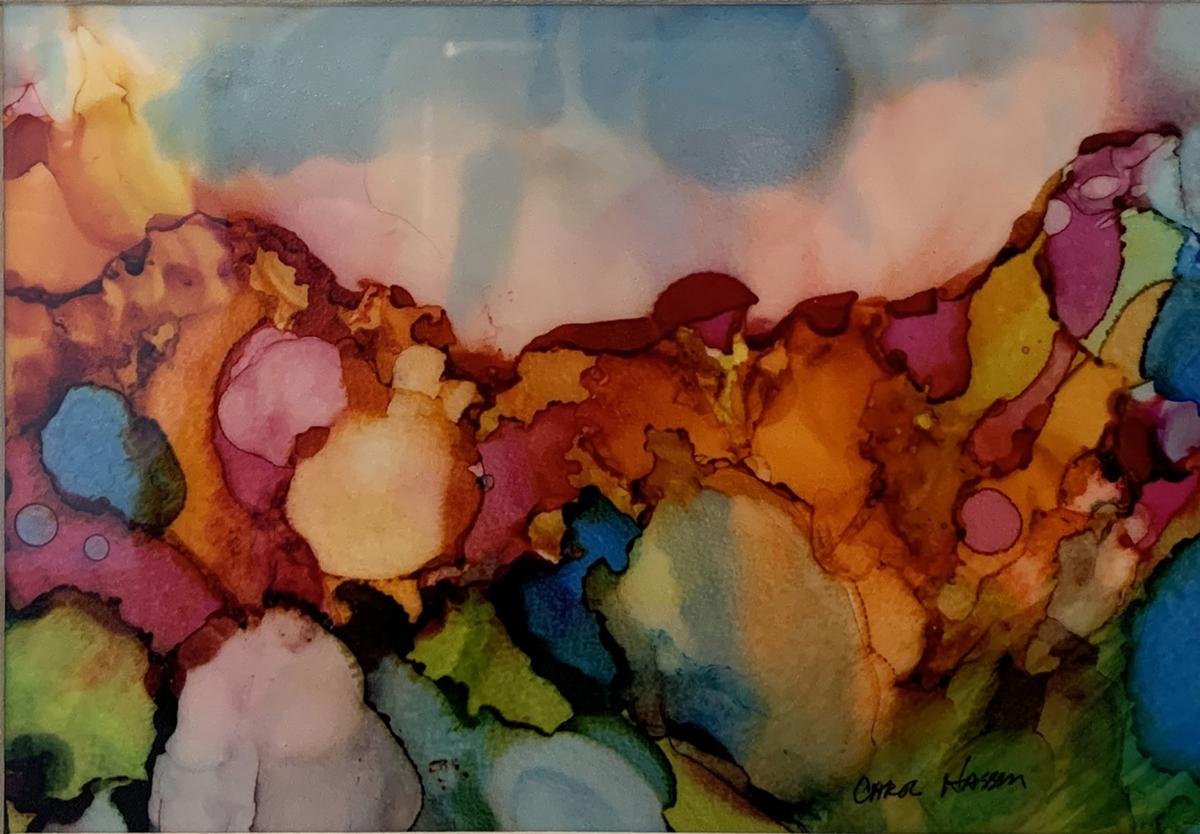 “Ring of Fire” by Carol Hassen.

FILE—Carol Hassen, director of YVCC's Larson Gallery, places a piece titled "Freedom On the March, Haj Ali, 2004" by artists Andy and Peg Granitto, as she and other volunteers set up for the art show "Figuratively Speaking" on Tuesday, February 22, 2005. The show features more than 100 identical small mannequins transformed into individual works of art by area and national artists. After four days on display, the artwork will be auctioned off using a combination of silent, live and internet auctions.

“Ring of Fire” by Carol Hassen.

Carol Hassen, an artist and former director of the Larson Gallery in Yakima and Gallery One in Ellensburg, was always herself.

She was a tireless advocate for artists and the arts in general, bolstering the careers of established artists and introducing emerging ones. She took two of Central Washington’s most significant arts organizations to new heights, helping create endowments at both that have secured their futures. She was funny and tough and didn’t have time for phonies or pretentiousness, but if you were a local artist in need of a champion she was there for you.

“She was really honest,” said Monica Miller, who succeeded Hassen as Gallery One director in 2014 and remains in the role. “If she didn’t like something, you would know it. She didn’t mince words. The benefit of that was that she also said all of the good things. It means a lot to see somebody who is brave enough to just walk with that integrity and that honesty.”

Hassen died from brain cancer Jan. 2, a week shy of her 78th birthday.

Born in Indiana, the fourth of five children in a family that lived at or near the poverty line, Hassen moved to Oregon in her youth. Her family moved a lot; she attended 13 schools in 12 years. When her father was between jobs, they lived in a trailer with a fold-down bed she’d share with her younger sister.

That experience contributed to her dedication to providing for her own family, said her husband, artist Bob Fisher. Hassen had a son and adopted a daughter with her first husband, John Moisan, whom she married shortly after high school. They divorced while the children were still young.

“She was a single mom, going to school full time and working and having a house,” Fisher said. “But she made sure that the kids, Jeff and Jennifer, each had their own bedroom.”

Hassen discovered her artistic drive at age 30 after taking an art class. She left the paralegal work she’d trained for in favor of art school at Oregon State University, from which she graduated in 1977. In 1979, she moved to Ellensburg to teach art at Ellensburg High School, but the position was defunded shortly thereafter. So she got a part-time teaching position at Central Washington University, from which she would earn her master’s in art in 1983. While there she met Fisher. They married in 1986.

“Her house was the center of the graduate student life off campus, and it wasn’t because it was the party house,” Fisher said. “It was because she was always available to anyone who needed help. If someone needed help with a project or studying for an exam, or if they needed a shoulder to cry on after a breakup, she was there.”

In 1989, she became executive director of Yakima Valley Community College’s Larson Gallery, a post she would hold until 2006. During that time she helped elevate it from a nice but small and unknown gallery to one widely recognized as among Central Washington’s premier arts venues. Under Hassen, the gallery hosted retrospective shows for regionally important artists, launched the popular Tour of Artists Homes annual event, and established an endowment that now boasts more than $400,000. Those efforts gained her a Governor’s Arts Award from Washington Gov. Gary Locke in 2001.

“She took the gallery to the next level,” current Larson Executive Director David Lynx said. “She made it more solid, and not even just in the gallery. The whole idea of Tour of Homes and getting art out to people was really important to her.”

That’s how Jane Gutting, a local artist who was then superintendent of state Educational Service District 105, met Hassen in the late 1980s. Hassen wanted to talk about getting K-12 students into the Larson Gallery.

“She worked really hard to connect art educators,” Gutting said. “She was a great artist in her own right, but she was equally passionate about art education and getting art to everybody.”

Hassen returned to nonprofit leadership in 2010 when, having moved from Yakima back to Ellensburg in 2008, she recognized a need at Gallery One. She led that organization until 2014 before turning it over to Miller, whom she had encouraged as a replacement. As with the Larson Gallery, she reinvigorated Gallery One and helped establish an endowment fund that will ensure its future.

Miller, reluctant at first to fully buy into the mentor-mentee dynamic between the two, came to appreciate Hassen tremendously over the years.

“I trusted her, and I laughed with her,” Miller said. “Carol always used to say she was grooming me. I didn’t really like the word ‘grooming,’ but in hindsight she treated me like a daughter and took me under her wing.”

Gallery One will honor Hassen with a retrospective exhibit that will hang throughout February. “Decades of Art” will include work from throughout Hassen’s career. The pieces, many of which are paintings of serene settings, have taken on a new resonance for Miller since Hassen’s death.

“They look like peaceful places to be,” she said.

That’s fitting for an artist who seemed at peace with herself and who she was.

“She did have this confidence of self,” Miller said. “She just owned who she was. She knew what her achievements were. She knew what she was doing. Maybe that confidence is what gave her that space to help so many others.”

When Carol Hassen was given the Larson Gallery Arts Award in 2006, the gallery published a catalog featuring samples of her work and kind words from friends and colleagues. Here are a few excerpts:

"Carol is a vibrant artist, gifted exhibitor and talented director with a passion to bring art to everyone. Carol has a special talent for seeing a thread of commonality in different art pieces and then displaying that art so others can see it, too!"

"As a co-conspirator in the quest to make the arts accessible and interesting to a broad cross-section of the Yakima Valley's population, I find that Carol Hassen is a role model."

"I have watched Carol work like a madman, helping the Larson Gallery go from a small, unknown gallery in Yakima to one of the most respected galleries in Eastern Washington."

"After 23 years, Carol Hassen's paintings continue to inspire me."

"Through Carol's hard work, guidance and outreach, the Larson Gallery Annual Photography Exhibition has motivated and shaped the lives of many photographers working in America. I know I can speak for Seattle-based photographers when I say 'It is a great pleasure to say thank you, Carol, for everything you have done for art and photography throughout the years!'"

"Carol speaks, and Artist Trust listens, we all listen, because what she has to say is timely, important and meaningful. I am grateful for our friendship (for lo, these many ice ages!), for her artistry, advocacy and her unwavering conviction of the value of arts, artists and us."