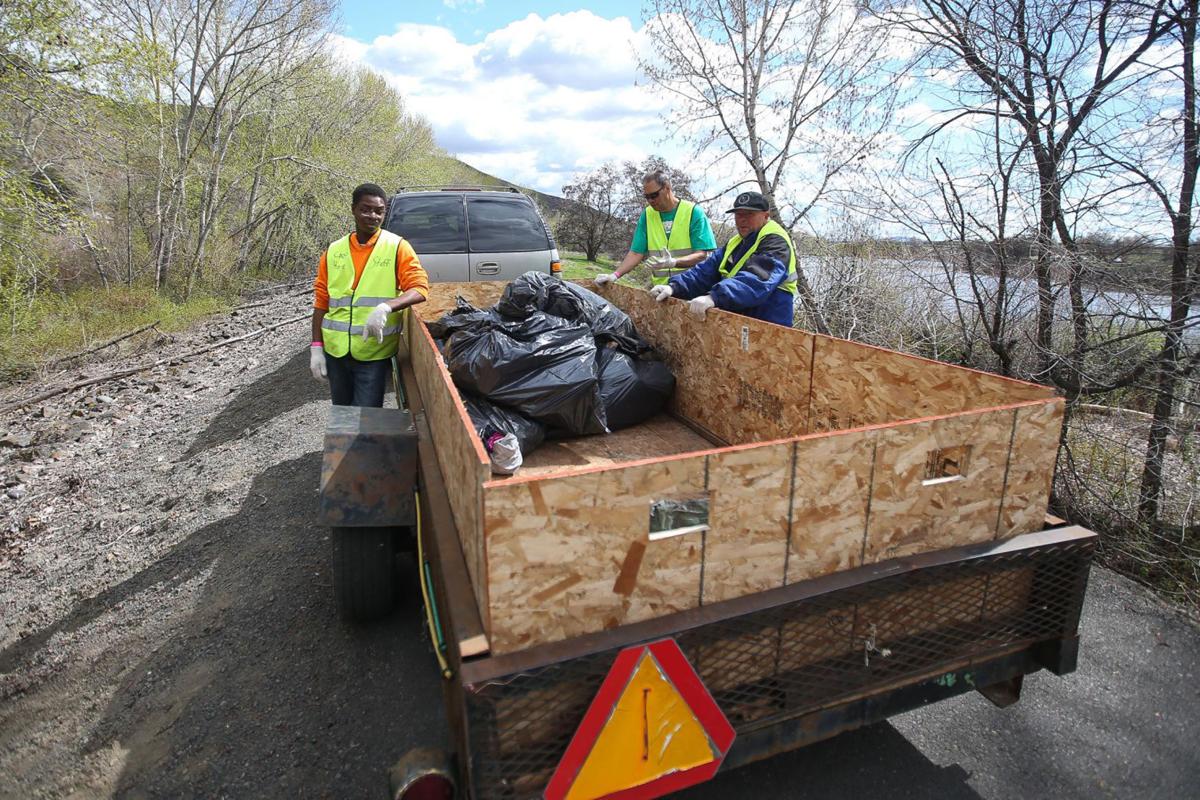 FILE — From left: Isaiah Davison, Mark Kaeo, and Howard Gudger collect trash bags in the a trailer as they volunteer their time cleaning up the Yakima Greenway on Friday, April 12, 2019, in Yakima, Wash. 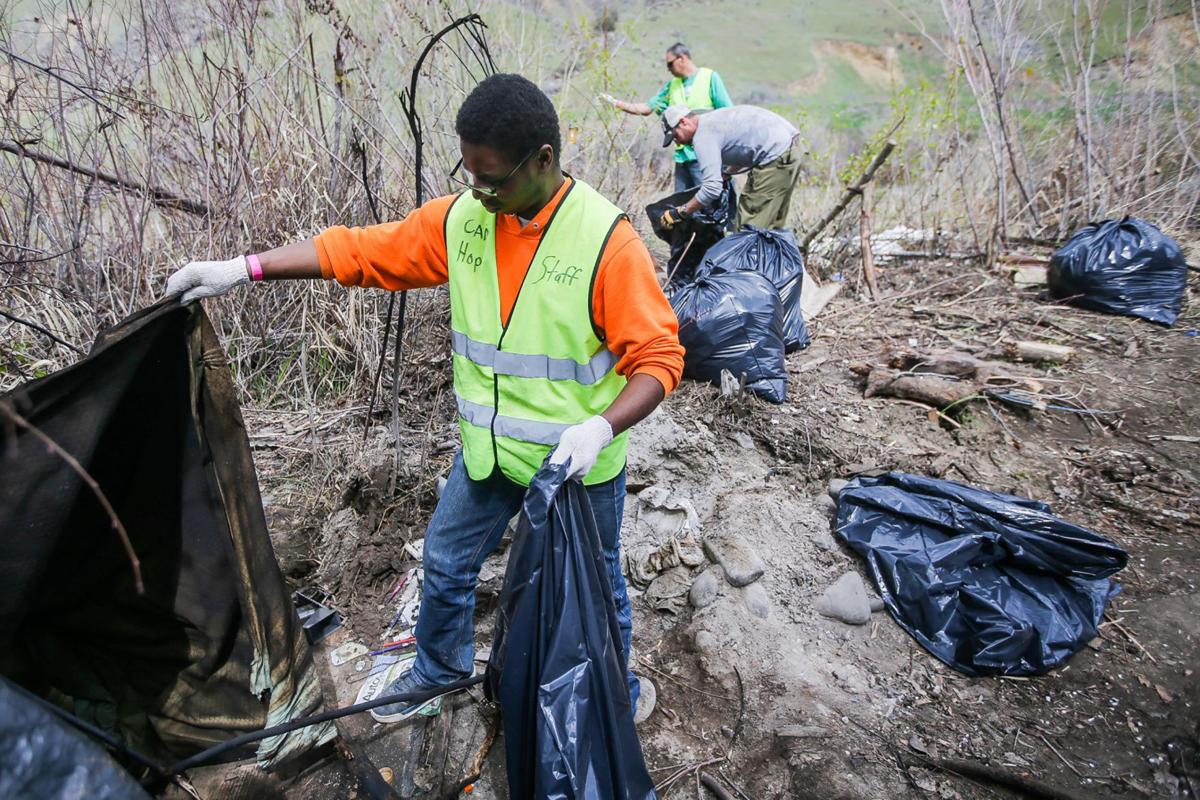 FILE — Isaiah Davison, left, places materials in a trash bag as he volunteers his time cleaning up a campsite near the Yakima Greenway on Friday, April 12, 2019, in Yakima, Wash.

FILE — From left: Isaiah Davison, Mark Kaeo, and Howard Gudger collect trash bags in the a trailer as they volunteer their time cleaning up the Yakima Greenway on Friday, April 12, 2019, in Yakima, Wash.

FILE — Isaiah Davison, left, places materials in a trash bag as he volunteers his time cleaning up a campsite near the Yakima Greenway on Friday, April 12, 2019, in Yakima, Wash.

Donor dollars typically pay for those services, but the delay of a county grant intended for operations is forcing the homeless encampment to shift funding sources, he said.

“We just have to redirect donor dollars to people who are coming into the shelter and so forth,” Kay said.

For more than two years, Camp Hope staff and residents have routinely cleaned garbage from the Greenway and encouraged homeless people camped along the Yakima River to seek shelter and social services.

Greenway Executive Director Kellie Connaughton said suspending the cleanup program and outreach will impact the Greenway, a 20-mile pathway along the Yakima and Naches rivers filled with parks and fishing spots. It is popular with walkers, joggers and cyclists.

“Mike’s team really had a system to encourage people, clean up, and that really provided a tremendous service,” she said. “It will be hugely missed.”

At issue is a $1.1 million grant-funded project that installed four portable buildings at the East Yakima homeless encampment. The project included operating funds that would cover the cost of housing additional homeless people in those portables.

But those funds have yet to make it to the encampment, squeezing its budget, Kay said.

She said project funding was split into two parts — an estimated $850,000 that covered the construction side of the project and another projected $210,000 for operations.

Magasis said construction debt needs to be paid before allocating funds for operations.

“We need to make sure that every cent that has come out of the portable project has been paid,” Magasis said.

Yakima County received a $1.3 million grant from the state Department of Commerce to provide additional homeless shelter during the COVID-19 pandemic.

It was intended to provide enough room to accommodate social distancing and other recommended safeguards.

More than $1 million was awarded to the portable project. The remainder went to other area service providers.

Camp Hope was the only service provider willing to participate in the portable project.

Other shelters, such as the Union Gospel Mission and Noah’s Ark in Wapato, declined to participate. A building code issue prevented Noah’s Ark from setting up a portable and the mission lacked additional power, Magasis said.

Delays in receiving funding from the state drove up construction costs, she said.

Portables that were planned for Yakima went elsewhere, and the county had to order new ones, she said.

Power had to be connected to the portable buildings and sorting out billing for the cost of installing infrastructure from use of power has slowed final payment of construction costs, she said.

Camp Hope was responsible for paying the power bill starting in March, when the portables went into use.

The grant covered the cost of power used during construction and separating those costs have taken time, Magasis said.

Pacific Power initially billed it all together and had to split it up, she said.

Magasis said the county received the final bill Tuesday from Pacific Power and that it should be paid soon.

After that, the grant money for operating the portables will be released, she said.

Because construction costs were over budget, Camp Hope will only receive about $150,000 in operational funds, Magasis said.

Kay said he paid the usage fee back in July. There are nine months left on the two-year, use-it-or-lose-it grant that expires in June 2022.

“Here we are in September going into October and you don’t have the final costs for these, that doesn’t make sense to me at all,” Kay said.

Residents serve as Greenway ambassadors, helping maintain facilities most of the year.

During the pandemic's peak in  the summer of 2020, residents flocked to the Greenway for some open space. Camp Hope residents kept picnic tables and other facilities sanitized, Connaughton said.

“It was such a success that Mike was able to find funding for this summer as well,” she said. “Hugely a success. They’re great ambassadors for us so it’s been a great partnership.”

The ambassador program will continue because it’s supported by other funds, Connaughton said.

But any suspension of cleanup and outreach — conducted every Tuesday — will be missed, she said.

Camp Hope, in partnership with the county’s code enforcement division, has removed about 31 tons of trash and other debris from the Greenway.

“That’s our hope,” he said. “I really want to do it. Our residents really get a lot out of doing it.”

Outreach by Camp Hope residents have helped reduced the number of homeless people living along the river by connecting them to services, Connaughton said.