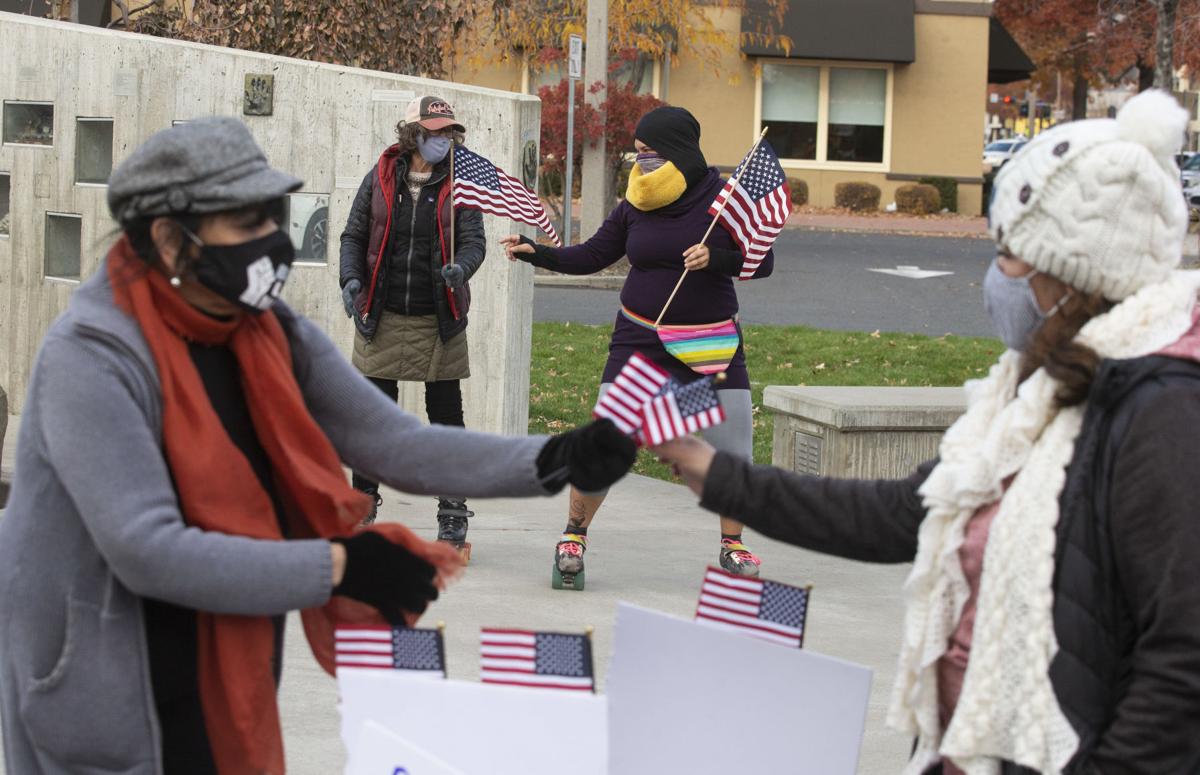 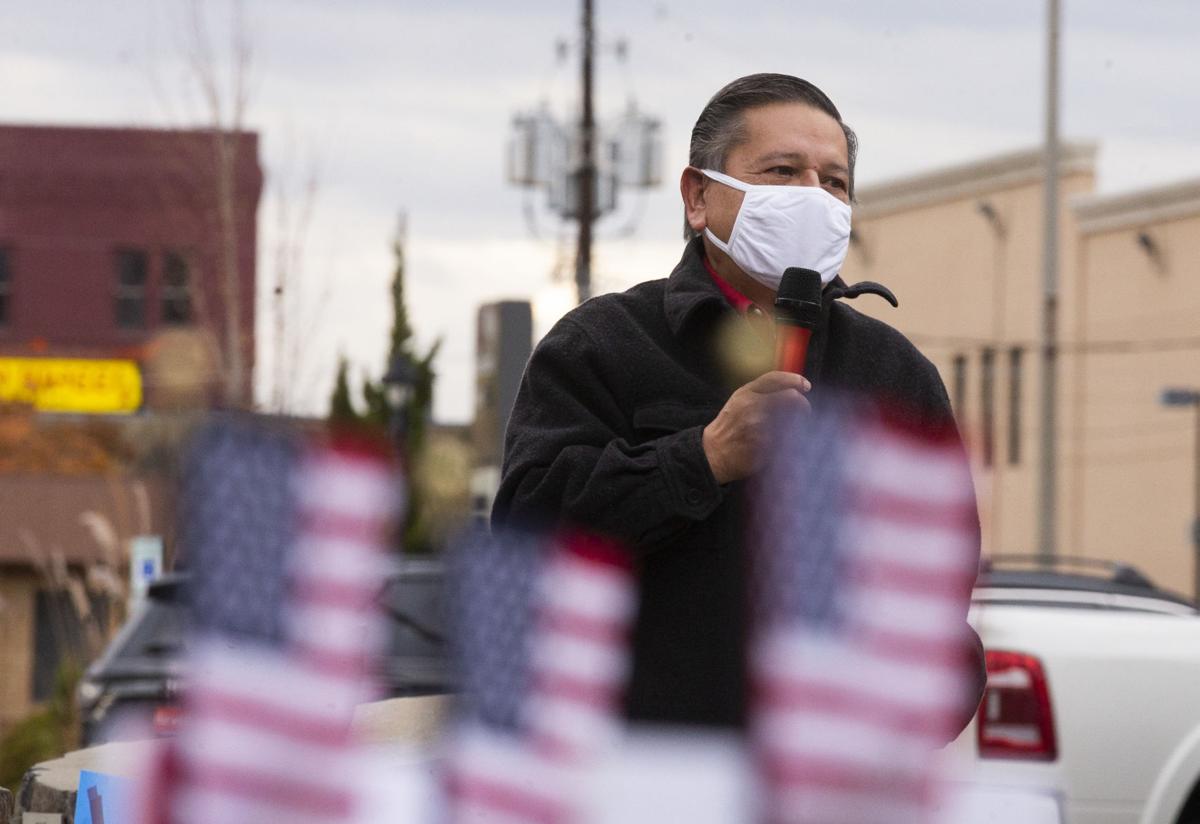 Julio Romero speaks at a rally celebrating the election of Joe Biden and Kamala Harris on Sunday, Nov. 8, 2020, in Millennium Plaza in Yakima, Wash. 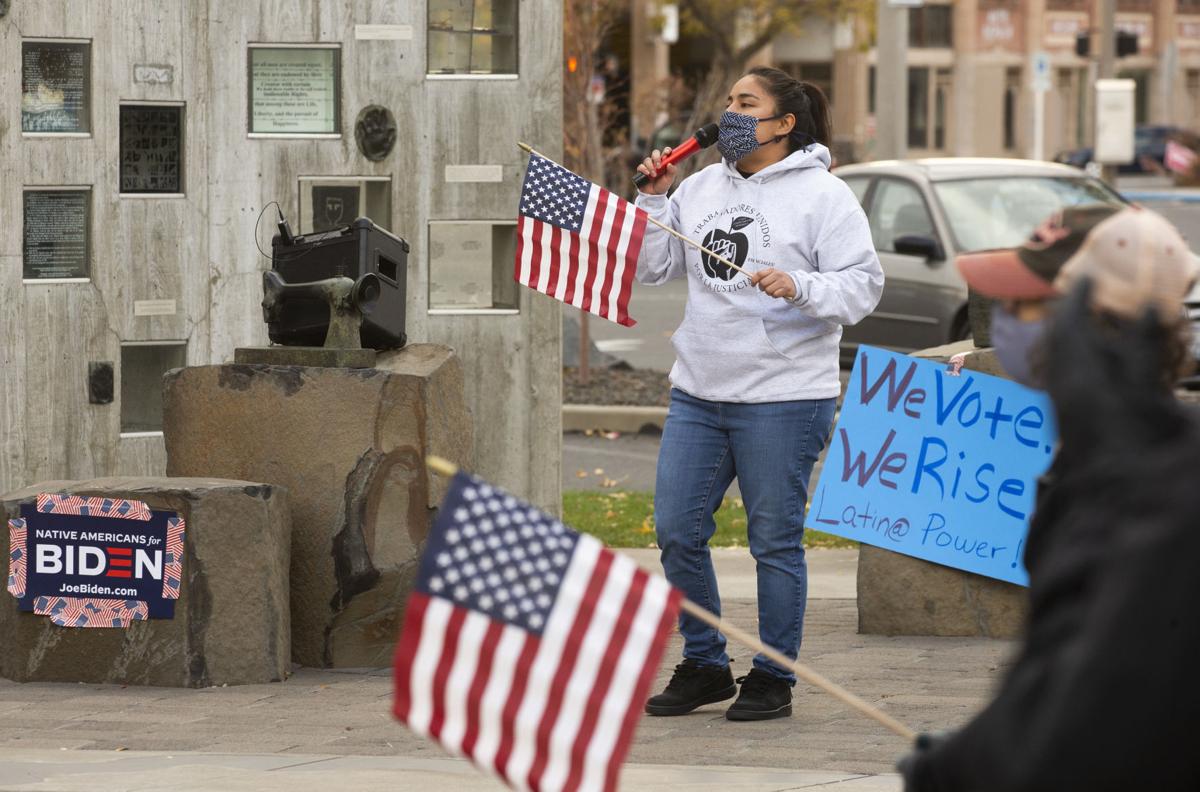 Dulce Gutiérrez speaks at a rally celebrating the election of Joe Biden and Kamala Harris on Sunday, Nov. 8, 2020, in Millennium Plaza in Yakima, Wash.

Julio Romero speaks at a rally celebrating the election of Joe Biden and Kamala Harris on Sunday, Nov. 8, 2020, in Millennium Plaza in Yakima, Wash.

Dulce Gutiérrez speaks at a rally celebrating the election of Joe Biden and Kamala Harris on Sunday, Nov. 8, 2020, in Millennium Plaza in Yakima, Wash.

The first part of the rally Sunday in downtown Yakima was a dance party. Blue balloons flew around the ground of Millennium Plaza. A soundtrack of disco hits blared from a speaker as participants bobbed their heads, danced and roller-skated.

Among the about 40 people celebrating in downtown Yakima was Aileen Kane, 67, 14th Legislative District chair for the Yakima County Democrats.

“It was a manifestation of the power people of color hold in their hands,” Kane said, crediting their votes for helping Joe Biden and Kamala Harris get elected.

About 30 minutes into the rally, the dance tunes transitioned to “Hail to the Chief,” and the event shifted to a call for action.

Sunday’s event, a celebration of the election of President-elect Joe Biden and Vice President-elect Kamala Harris, was also deemed a victory for communities of color and the progress made getting Latino and Native residents to vote.

“This election should prove how important your vote is,” said Maria Fernandez, director of Empowering Latina Leadership in Action, or ELLA, a newly formed organization in Yakima aimed at encouraging Latina women to increase civic engagement in the community.

Fernandez declared the election an illustration of the impact of the votes from Latino and Native communities, including those in the Yakima Valley, calling it a “Brown Belt” that will now help decide future elections. She pushed people to encourage more friends and family to vote and stay engaged in the years to come.

Along with Fernandez, the event featured speeches from several community organizers and prominent political figures. They included former Yakima City Councilwoman Dulce Gutierrez; A.J. Cooper, the Democratic challenger for the 15th Legislative District state representative seat in 2018 and 2020; and Gabriel Muñoz, who ran for the 15th Legislative District state senate seat in 2014 and is now a community organizer with the Latino Civic Alliance.

Calls to vote and to run for office were plentiful among those who spoke. There were also calls to hold Biden and Harris accountable for fulfilling their promises on several issues, including racial and economic inequality, climate change, and the preservation of immigrant and LGBT+ rights.

“Just because Biden and Harris (will be) in the White House doesn’t mean the work is over,” Gutierrez said. “They’re going to be there waiting for us to push them to do the right thing like any other administration. We have to be present. We have to be visible. We have to be vocal, and we have to continue to show up.”

Muñoz brought out his daughters during his speech, illustrating his primary motivation in community organization and civic engagement efforts over the years.

“In order for my little girls to succeed, to achieve the American Dream, I knew I had to be civically engaged,” he said.

Muñoz recalled his run for Washington Senate. He noted that while he wasn’t elected, he was energized by the hundreds of newly registered voters, including those in the Latino community.

Mathew Tomaskin, a 57-year-old Parker resident, also spoke of the importance of energizing the Native American community to vote and run for office.

“It’s time for us, for people of color, to turn Eastern Washington from red to purple to blue,” he said.

There were also chants of both “Si, Se Pudo!” and “Si, Se Puede!” — “Yes we did!” and “Yes we can!” — again a reflection of the celebration of what was achieved and the work still to be done.

Alberto Saldana Jr., a 33-year-old Yakima resident, said the election gave him hope and faith to see a president-elect who “holds values near and dear to me.”

Saldana said his focus going forward is to advocate for the different communities he’s part of as a public health graduate student, a member of the LGBT+ community and a person of color.

“People often forget all those issues are connected,” he said.

Scenes from a rally celebrating the election of Joe Biden and Kamala Harris on Sunday, Nov. 8, 2020 in Millennium Plaza in Yakima, Wash.