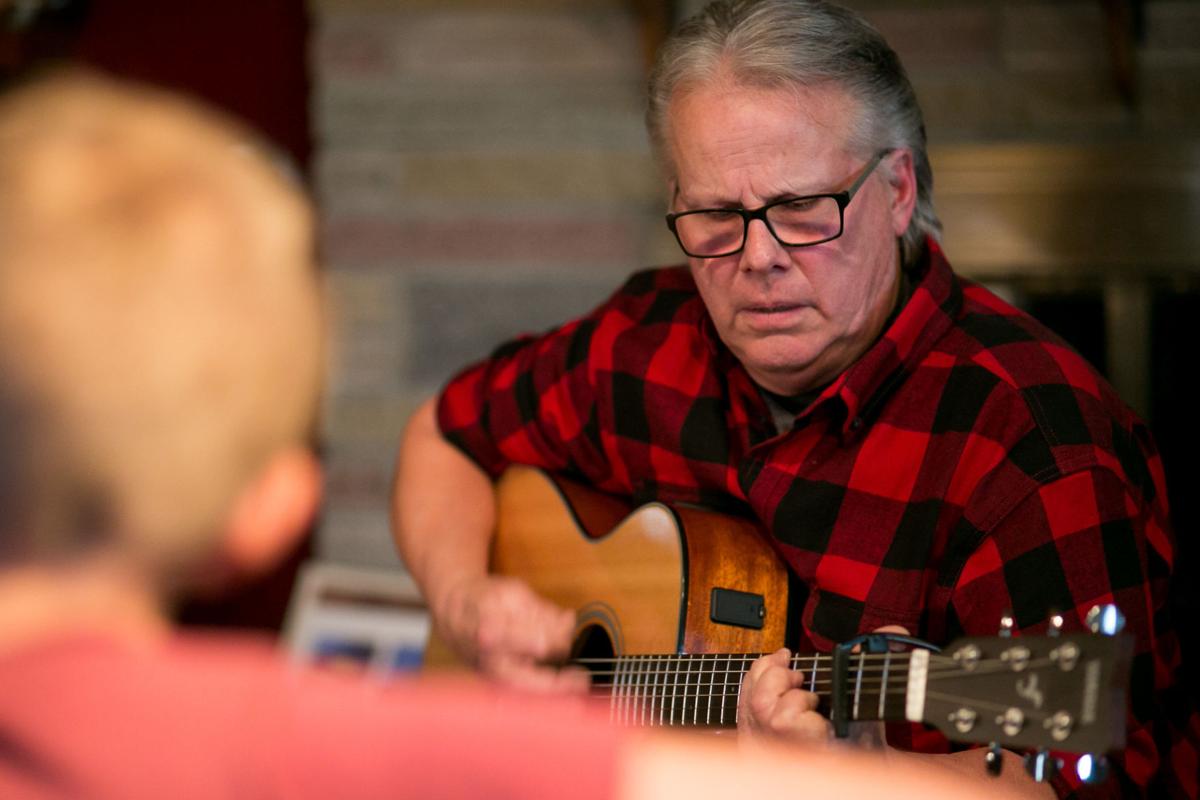 Jeff Martin, co-owner and instructor of New Dimensions Music Studio, practices “Eight Days a Week” by The Beatles during a guitar lesson with a student Thursday, Feb. 6, 2020, in Yakima, Wash. 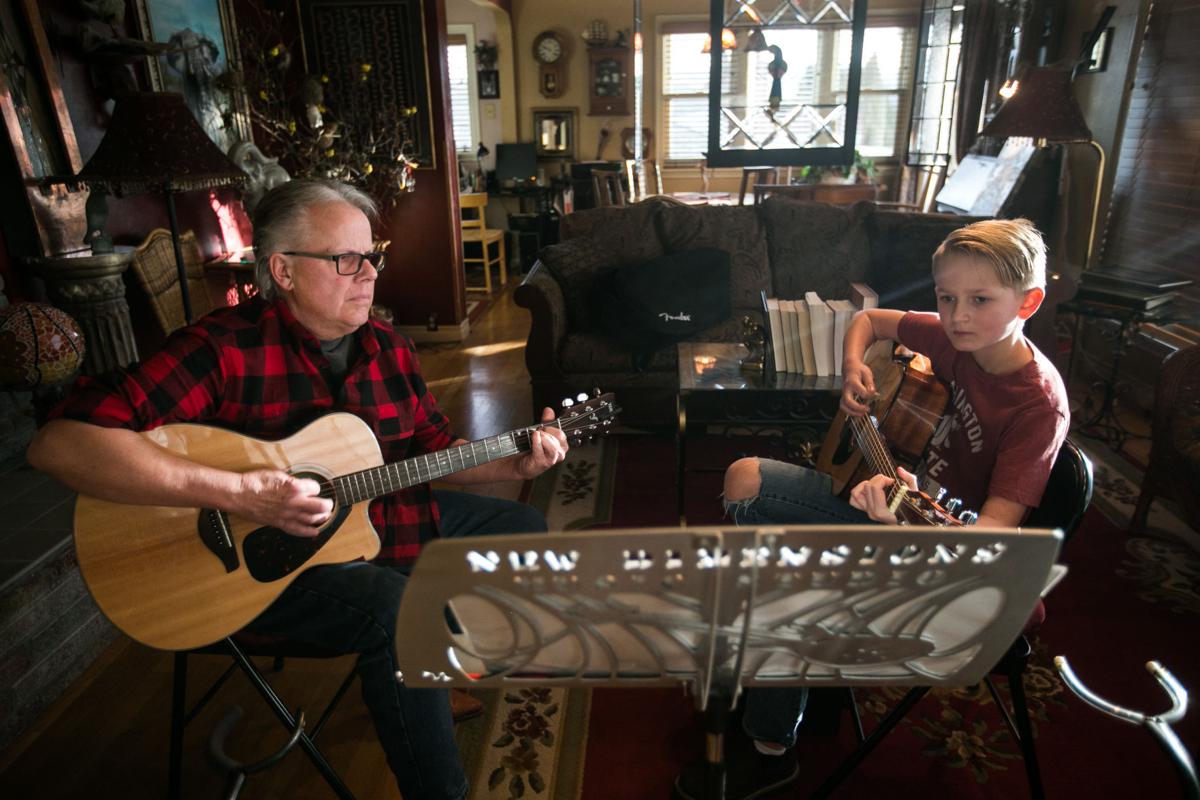 FILE—In this photo taken on Thursday, Feb. 6, 2020, Jeff Martin, co-owner and instructor of New Dimensions Music Studio, left, practices “Eight Days a Week” by The Beatles during a guitar lesson with Jacob Brown, 10, in Yakima, Wash. 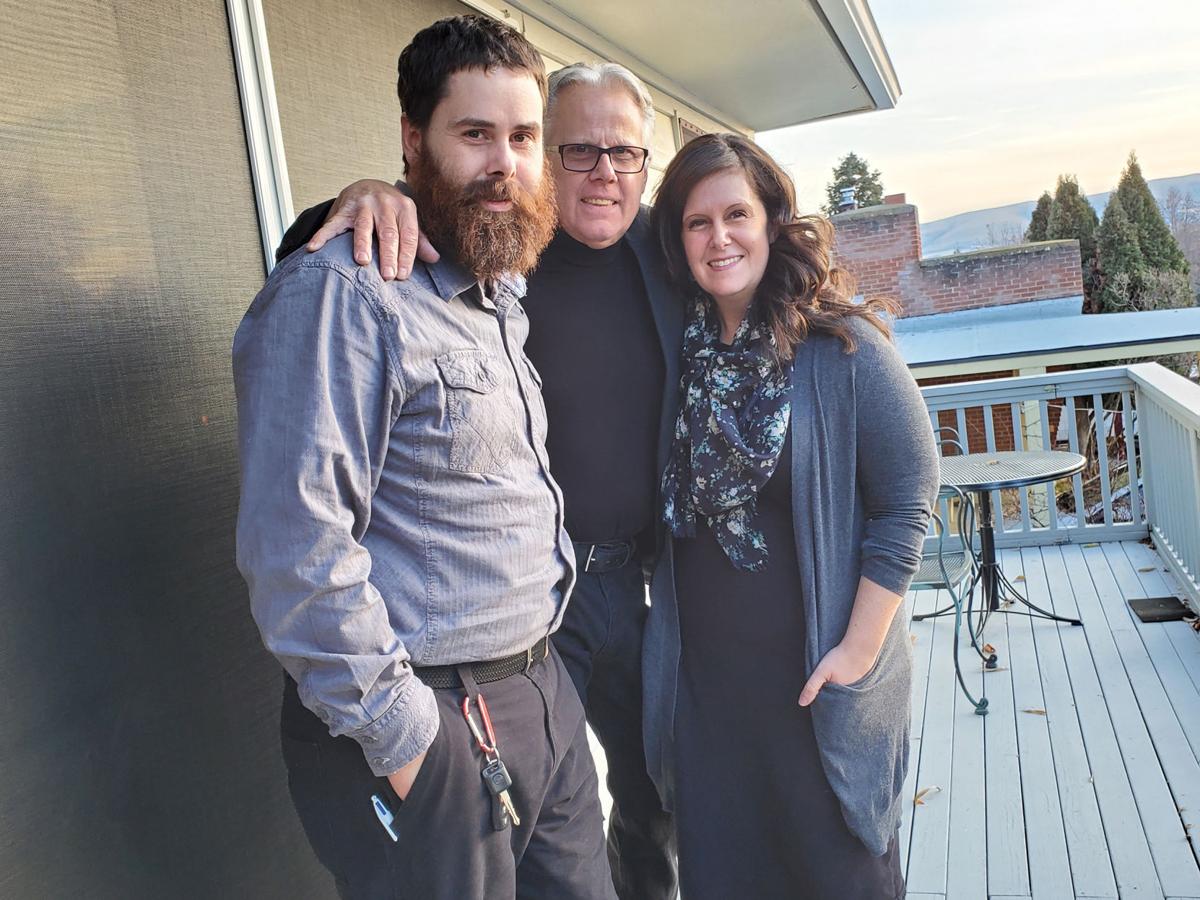 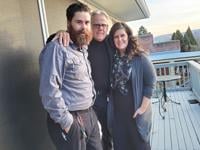 Jeff Martin, co-owner and instructor of New Dimensions Music Studio, practices “Eight Days a Week” by The Beatles during a guitar lesson with a student Thursday, Feb. 6, 2020, in Yakima, Wash.

FILE—In this photo taken on Thursday, Feb. 6, 2020, Jeff Martin, co-owner and instructor of New Dimensions Music Studio, left, practices “Eight Days a Week” by The Beatles during a guitar lesson with Jacob Brown, 10, in Yakima, Wash.

"We really live life,” Jeff Martin said in February 2020 from the living room of his Yakima home, which was filled with a variety of musical instruments, his latest oil painting and a guitar student there for lessons.

His student, Jacob Brown, was about to play what Martin considered “one of the coolest songs ever:” “Chasing Cars” by Snow Patrol. “So whatever happens, just keep playing it through and you’ll know what to do. Ready? Play when you’re ready.”

As his student began picking at the guitar strings, Martin offered guidance on hand placement. The room filled with music and lyrics from Martin’s gentle voice as they played the song through. Martin lauded his student’s ability to quickly pick up new songs. It was something they both had a knack for.

Music was one of Martin’s many passions in life, and he passed it onto others — from his own children to countless students throughout the Yakima Valley. He also shared it with Yakima, at private events, sets in the early days of the Yakima Farmers Market and in the lounge of Santiago’s Gourmet Mexican Restaurant in downtown Yakima. It’s one of the legacies that he leaves behind after his death at the age of 66 on March 29.

“That kind of gives me a little bit of comfort,” his daughter Meagan Mau said of the love for music Martin gave to others. “There’s a piece of him here and there and everywhere. And he lives on in his students — everyone who sings and plays music. I feel like there’s a piece of him living on in them.”

He was self-taught. As a kid growing up in Union Gap, he built makeshift drum sets out of bedroom furniture and imitated drum beats on records until he was a skilled percussionist playing in high school bands, according to his son. He honed his skills on countless instruments, and Martin said he could play a song by ear after five or 10 minutes.

In one memory, Martin and his wife, Toni, were in a music store when he started playing around with a harp. One of the employees approached him to say he thought he recognized the song, Toni said.

“We were so amused because he didn’t have any idea what he was playing,” she said of Martin. “But it sounded so good. His rhythm was amazing. I would watch him use pliers or do anything, and there was rhythm to it. His whole body was just rhythm … Everything he did in life was rhythm.”

Martin was born in 1954 and raised in Union Gap. His grandfather owned and ran Cascade Hardware on Main Street in Union Gap, making their family well-known in the community. Martin attended Union Gap School before going onto Eisenhower High School.

By that point, he likely owned his first drum set, said his son Kiel Martin. He formed a band with peers in the Valley and was soon making a record at a recording studio in Cle Elum, he said. He learned to play guitar at a young age, followed by violin, and then the list of instruments continued to grow.

After high school, Martin went straight into the workforce. He took over the hardware store for some time and offered clock and watch repairs. He later took up a career at ASAP Metal Fabricators in downtown Yakima. In the mid-’70s, he married his first wife and they began having kids in the early ’80s: Meagan followed by Kiel.

To his children, he was a role model of talent, faith and character.

Both remember music being integral in their childhood. Meagan recalled classical music constantly playing in the background growing up, and her dad’s ability to decipher the composer by ear. He loved music ranging from Bach to Bob Marley or Elvis Presley, whose voice he had a talent for imitating.

“Any musical instrument he touched, he made it sing in a way you wouldn’t imagine coming out of it without him touching it,” Kiel said. “I doubt there’s any instrument that he didn’t try to play at one point. It was a thing where if he ever saw an instrument and he could, he would pick it up (and) see what it could do.”

A born-again Christian, Martin helped found Bible Believers Baptist Church in the early ’80s, where he led songs for years, Meagan said. In addition to instilling faith in Kiel and Meagan, he offered his time, listening ear and emotional strength as a father. Both of them recall porch-side talks and phone conversations as cherished examples of Martin’s ability to be present for those he loved.

“He’s the kind of guy that could walk in a room and just light up a room,” Meagan said. “After you spend time with him, you feel better for it.”

In the mid-’90s, Martin and his kids’ mom divorced. A few years later, a relationship began with Kiel and Meagan’s childhood piano teacher, Toni, whom Martin would go on to marry, and live and teach alongside for the remainder of his life. The couple’s families intertwined.

“He was my best friend and my soulmate, and he was a wonderful husband,” said Toni Martin. “Music was our basis. That’s how we met. We started out playing piano and guitar together, then we did piano and cello together.”

Together they were in a rock band called Toni and the Blue Tones, then the Rod Giles Band, and finally The Relics — a duo that played at Santiago’s. They also taught together out of their home, with Toni teaching piano and Martin teaching guitar and drums after work at ASAP. He ramped up his lessons about seven years ago after retiring from metalwork.

Martin could never explain how he was able to easily play various instruments, but he had a keen ability to teach others. At one point, they had 80 students going through their house in a week.

One of his students was Christian Dennison, a 13-year-old guitar student who grew a close friendship with Martin and saw him as a family figure. His dad, Kris Dennison, looked forward to his son’s weekly guitar lesson, which he would sit in on and enjoy bantering and jokes with Martin, and the boom of the instructor’s voice.

Active to the end

Beyond his musical skill, Martin’s talent had few limitations. Meagan casually referred to him as a Renaissance man. He was a prolific painter, with canvases throughout his own house as well as commissioned murals in homes throughout the Valley, according to his children. He also did handiwork for community members, leaving imprints on people’s homes. He contributed to the clock tower at Yakima Valley College, participated in Vintiques of Yakima Car Club, and published a children’s book about Terry the Tumbleweed. His music, metal craft, handiwork and art trace the Valley — a gift of his legacy that will remain for those who knew and loved him, his children said.

He also remained socially and physically active. Each day, he would go for a 5- mile walk. On March 29, he was on his daily walk when he suffered a sudden onset heart attack. He died later that day, and is survived by his wife Toni, his children, stepchildren, 20 grandchildren, five great-grandchildren, and countless students and community members who were impacted by him.

“There wasn’t anything he couldn’t figure out how to fix or make work better,” said Kiel. “Except hearts.”