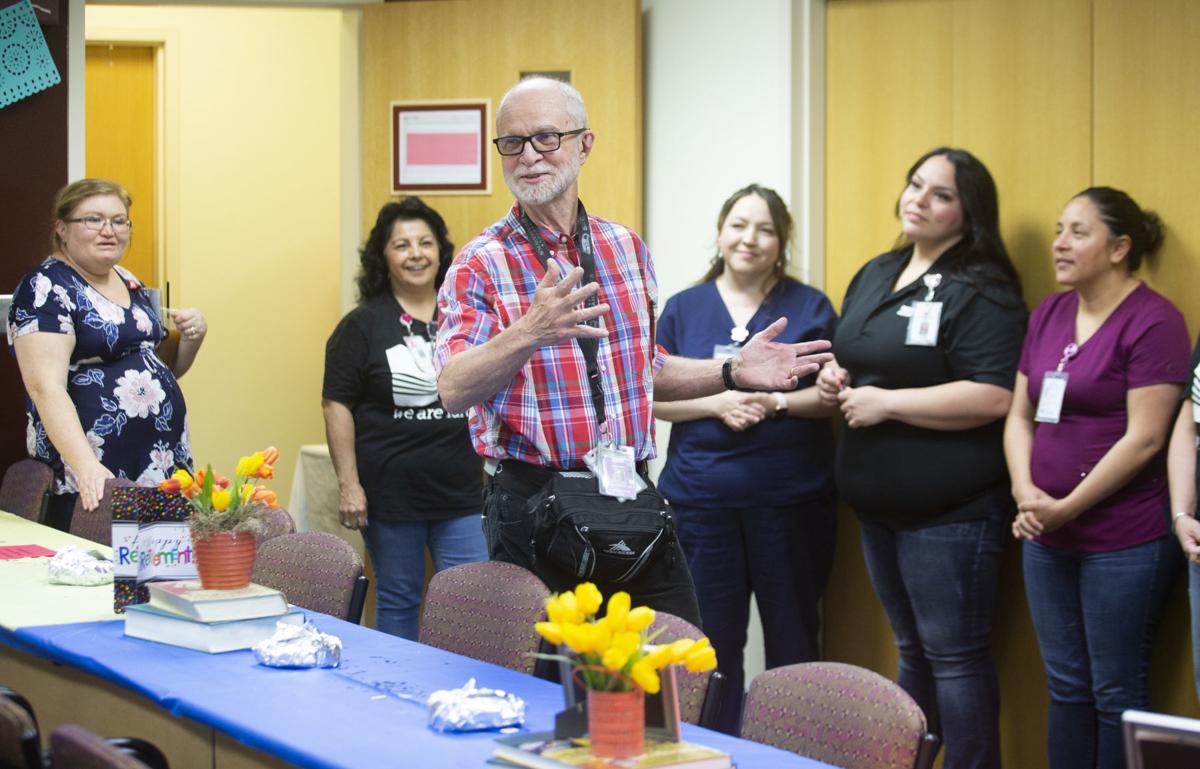 Dr. John Naiden talks to friends, family and past and current coworkers moments after walking in to his surprise retirement party on Friday at the Lincoln Avenue Medical-Dental Center in Yakima. Naiden is retiring from the Yakima Valley Farm Workers Clinic after 40 years as an obstetrician and gynecologist. 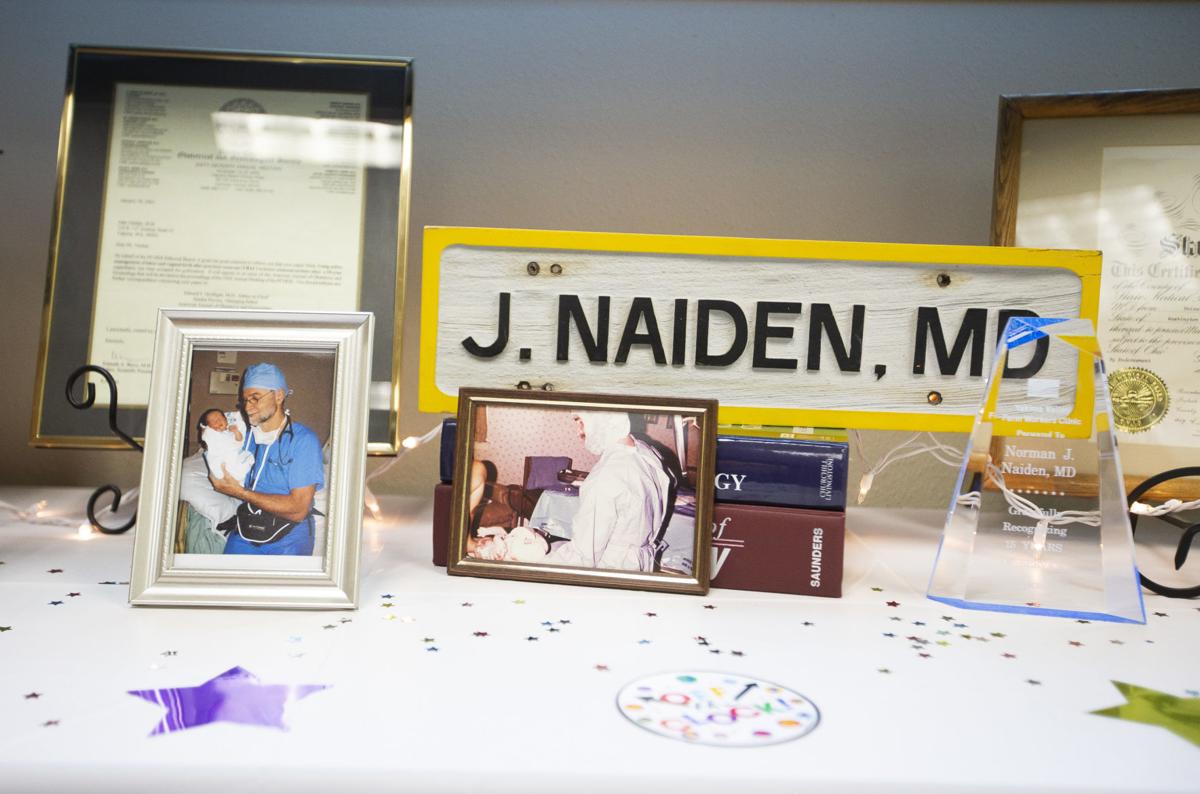 Photos, certifications and awards cover a table at the surprise retirement party for Dr. John Naiden on Friday at the Lincoln Avenue Medical-Dental Center in Yakima.

Dr. John Naiden talks to friends, family and past and current coworkers moments after walking in to his surprise retirement party on Friday at the Lincoln Avenue Medical-Dental Center in Yakima. Naiden is retiring from the Yakima Valley Farm Workers Clinic after 40 years as an obstetrician and gynecologist.

Photos, certifications and awards cover a table at the surprise retirement party for Dr. John Naiden on Friday at the Lincoln Avenue Medical-Dental Center in Yakima.

YAKIMA — Leticia Sanchez took a break Friday from her role as a receptionist at the Lincoln Avenue Medical-Dental Center to congratulate a co-worker on his retirement.

“Dr. Naiden, thank you for delivering me 34 years ago,” Sanchez said to John Naiden, shaking his hand before he rose from his seat to pose for a photo on his last day of work as an OB-GYN for Yakima Valley Farm Workers Clinic.

The clinic retirement party was a surprise to Naiden, who walked into the second-floor break room area to cheers and clapping and a hallway packed with celebratory food. A private party is planned for Saturday, and the nonprofit will also honor Naiden at its holiday gathering in December. Staff are collecting as many photos of “Naiden babies” as possible to create a memento for him.

Perhaps planners have a wall-size collage in mind? Or one that could cover an entire building? Because the effort could yield a lot of photos. A lot.

Along with delivering Sanchez, another receptionist at the Lincoln Avenue clinic and a doctor there, Naiden brought more than 15,000 babies into the world.

“There was a time I was doing more than 50 deliveries a month,” said Naiden, who will miss his co-workers but not the computers. “I’ve worked awfully hard the last 40 years, and now it’s time to relax.”

His idea of relaxing includes learning new languages, Turkish and some modern Greek, for a trip that he and his wife, Yolanda, are planning. Naiden is already conversant in English, Spanish, French, Italian and German and knows some Russian.

And though he won’t be getting the band back together — Naiden played bass in a group for 30 years — he will continue to keep fit by cycling and swimming, along with indulging his weakness for ice cream. He finished two small cups while musing on his job and what he has experienced over the decades.

“What I’m going to miss most is helping people. ... And of course bringing babies into the world. You can’t beat that,” Naiden said. “I went to medical school with the idea that I would help people.”

Naiden, one of nine children, began his career in private practice in Yakima. He founded the clinic at the former Southeast Community Center; that location later merged with Yakima Valley Farm Workers Clinic.

“When I first came to Yakima, a lot of people weren’t covered,” he said. “The state now covers everyone who’s pregnant. ... And the state realized it would be cheaper to pay for prenatal care. Here, I ended up taking a lot of them. I was going to do OB-GYN and I was going to take everyone who came.”

Many are repeat patients. Naiden delivered all of one woman’s seven children.

“Patients come (from) as far as Mattawa just to be treated by him, and have him deliver their babies,” said Lupe Rivera, medical assistant to Naiden for the past six years.

He has been part of bringing many people into the world who may not have otherwise had a fighting chance. One woman only 24 weeks along was in danger of delivering early. At the time, a baby born that premature would have died, Naiden said. He performed a rescue cerclage, a procedure used to prevent miscarriage or delivery in the second trimester of pregnancy.

“We got her to 35 weeks and she delivered. She brought that baby back 10 years later and he was such a handsome young man,” he recalled.

Downplaying his role, Naiden praised several co-workers he especially appreciated such as Lilian Trevino, whom he worked with for 35 years, and nurse practitioners Trudy Carbajal and Mary Esparza.

Naiden was just “part of a team, whether at the hospital or a clinic. I had my part, like Dina there,” he said, referring to his surgery coordinator, Dina Escobar, who started working with him in August 1988. She was the office manager at the clinic he founded.

Escobar also plans to retire, in December. She will drop to part-time in July, sticking around so she can train someone.

She and others laughed as they recalled the time when Naiden was so busy delivering babies that they hardly saw him in the office. The numbers are still impressive.

“A former employee asked for a reference (and) said he delivered 40 babies a month. They said that’s not possible,” Escobar recalled. The average was less than half that, she added.

“We were never average,” Escobar said.

Naiden has been a wonderful teacher for her. “He opened some doors that I didn’t think were possible,” Escobar said.

She was working as a cashier at Kmart when she decided to pursue a career, said her son, Ruben Escobar. That changed their lives.

“She was our hero; my father also. He painted cars,” he said.

“He will be very missed, but this retirement is well-deserved,” Olivares said.

Staff at Yakima Valley Farm Workers Clinic are hoping to collect as many photos of people who were delivered by Dr. John Naiden as possible for a special memento marking his 40 years as an ob-gyn in the Yakima Valley. Please email Amber Betts at amberbe@yvfwc.org to send photos and information, or for questions.