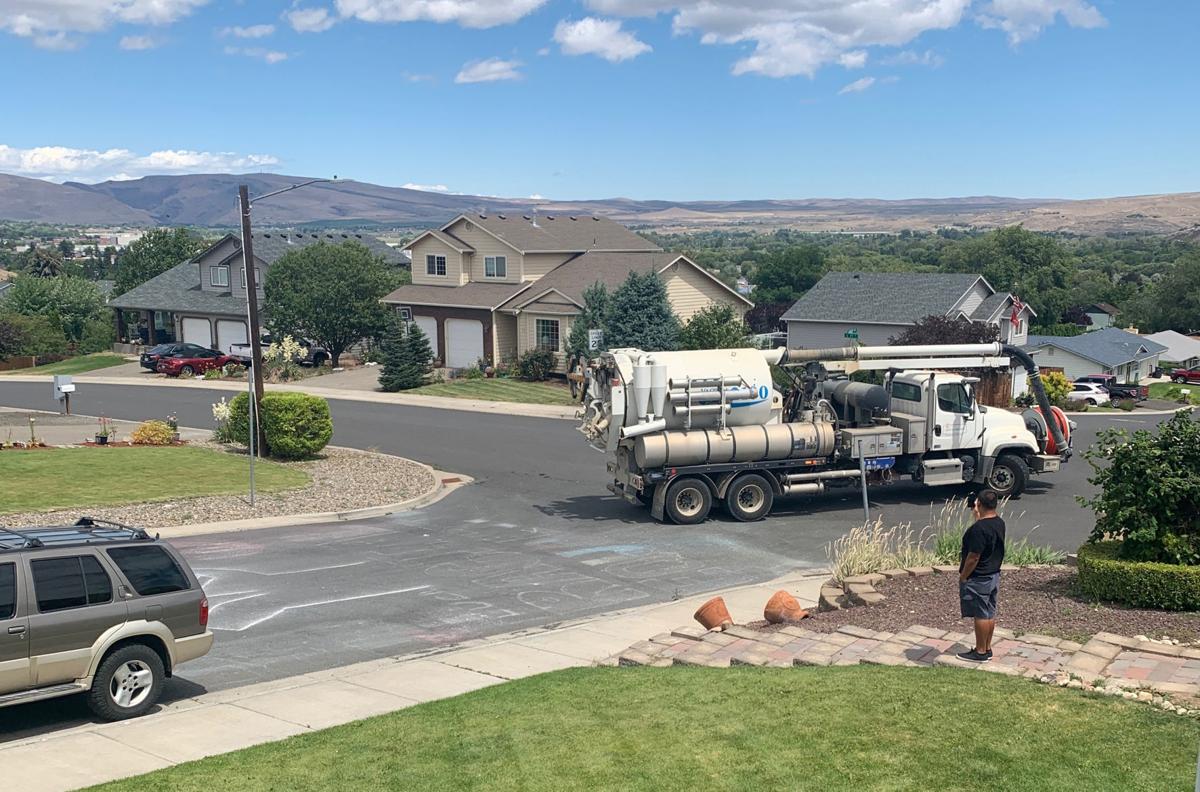 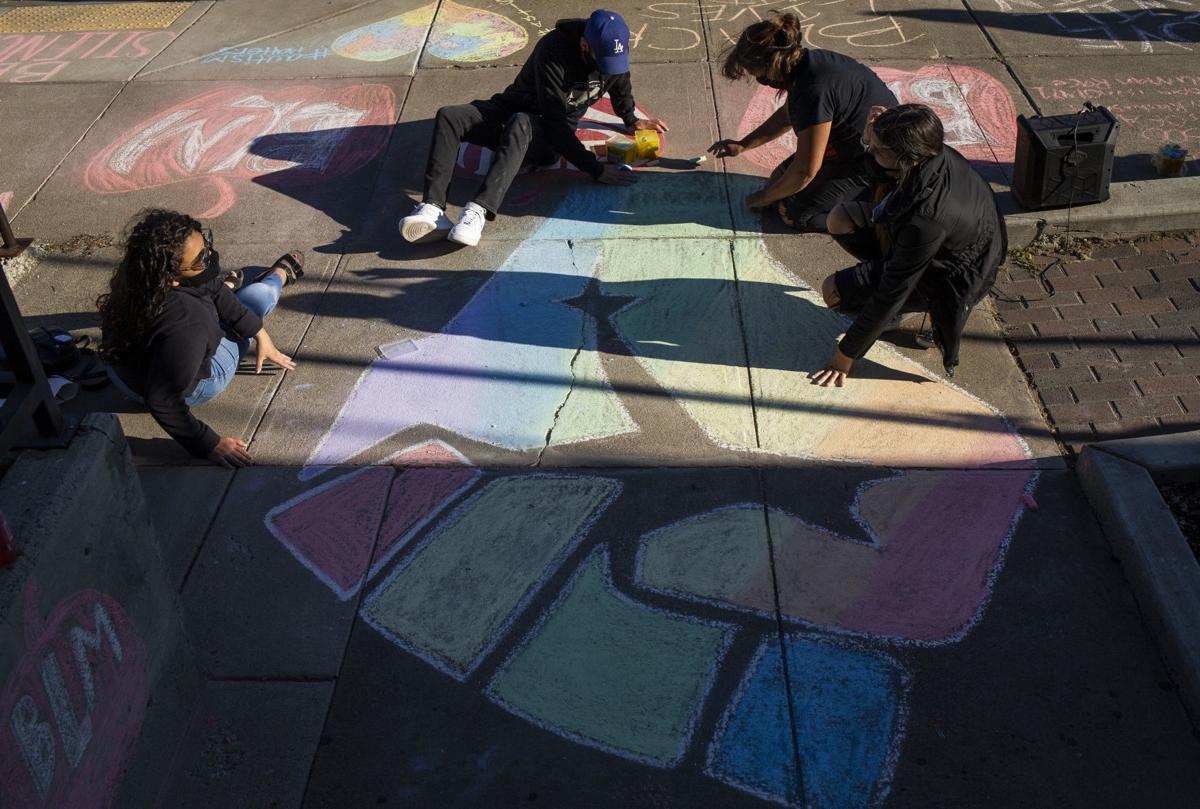 Protesters draw chalk art on the sidewalk and steps in front of Selah City Hall on Tuesday, June 30, 2020 in Selah, Wash. About 35 people marched from the Selah Civic Center to Selah City Hall where people took turns speaking about racism and LGBTQ discrimination before drawing and writing messages in chalk.

Protesters draw chalk art on the sidewalk and steps in front of Selah City Hall on Tuesday, June 30, 2020 in Selah, Wash. About 35 people marched from the Selah Civic Center to Selah City Hall where people took turns speaking about racism and LGBTQ discrimination before drawing and writing messages in chalk.

Cutler’s letter was written in response to the city’s erasing chalk art supporting Black Lives Matter from the street in front of the home of Laura Perez, his client, and warning Perez’s son that the art is considered illegal graffiti and he could be prosecuted.

On Tuesday, a city crew used a water truck to erase another chalk drawing from the dead end in front of Perez’s Lacy Avenue home. It was the fourth time, Cutler said.

“It is further evidence that the city does not respect the expression rights of its citizens,” Cutler said in a phone interview Tuesday. “It is disappointing, and I think the city can do better. They should do better.”

And the day before, a city official dumped a bucket of water on chalk art on the sidewalk in front of Selah City Hall as police officers confronted the artist and threatened him with arrest, protesters said.

Black Lives Matter protesters have focused their attention on Selah’s administrator, Don Wayman, after he publicly called the anti-police-brutality movement “a neo-Marxist organization” and that its local supporters were “devoid of intellect and reason.”

Protesters are calling for Wayman to either resign or be fired, and have threatened to boycott Mayor Sherry Raymond’s businesses until Wayman is out.

Wayman, contacted Tuesday morning, refused to comment on either Cutler’s letter or the incident in front of city hall.

Perez said earlier her adult son made the first artwork on the street in early June to support the movement, which protests police brutality directed at Blacks and other people of color.

Perez and her attorney said city crews removed art from the street in front of her home four times, including Tuesday. Cutler said he and his client are weighing their options.

That removal came a day after a Black Lives Matter protest at city hall where a smaller piece of chalk art was erased by a city official.

In the video, two police officers not wearing masks are seen talking to one of the protesters who is standing by chalk art showing the letters “BLM” drawn in the same style as Selah’s apple logo. As they are talking, Clerk/Treasurer Dale Novobielski walks over and dumps a bucket of water on the chalk art, washing it away.

“It was pretty crazy,” Courtney Hernandez, who has organized Black Lives Matter protests in Selah, said of the Monday incident. “The police came out of the building and told (the artist) to stop and they would arrest him if he didn’t.”

She said the incident will not deter her or others from protesting or making more art.

Cutler said there were two things that troubled him with the video. The first was how the officers appeared to be threatening the artist, and the fact that the officers neither wore masks nor maintained social distance from the artist.

“I am taken by the visual of a Black Lives Matter activist properly wearing a mask and complying with Gov. Inslee’s order with two police officers who are not wearing masks in an area where the coronavirus is running rampant,” Cutler said. “It sort of smacks of the idea that they are still picking and choosing the laws that they will abide by.”

First, Perez’s son did not create the art that Hayes was reacting to; members of the community who came out in support of the family and the Black Lives Matter movement did the drawings.

“Chalk is water soluble and non-permanent. The drawing in front of Ms. Perez’s house were made of water-soluble sidewalk chalk,” Cutler wrote. “Therefore, we disagree that this or any chalk art — especially that which constitutes political speech — violates Selah’s prohibition against graffiti.”

“Chalk is used to express displeasure with the government, and some of that use would be authorized under the Constitution,” said Sara Watkins, senior assistant city attorney, speaking solely about Yakima’s ordinance and not the situation in Selah.

Watkins said the city is also encouraging people to use chalk art to celebrate Independence Day this weekend in lieu of the city’s fireworks show at the State Fair Park.

In 2016, Spokane clarified its anti-graffiti ordinance by exempting the use of non-permanent chalk or paint on a public right-of-way as long as the artist does not block traffic.

During the June 24 Selah council meeting where council members met in closed session to discuss the complaints against Wayman, Raymond and Wayman defended the city’s decision to erase chalk art on streets and sidewalks.

“We are aggressive in removing anything that defaces a wall or sidewalk,” Wayman said. “We don’t differentiate on message or artistic merit. If it is something that is destroying city property, we will take legal measures. Beyond that, we simply clean it up.”

Raymond said if it is in a city right-of-way, and the city gets a complaint, the artwork would be removed.

When Councilman Russell Carlson asked for a clarification of the city code regarding chalk art, Raymond said city officials would look into it and report back at the July 14 council meeting.

Cutler said the city was unlawfully targeting the message of the Black Lives Matter group, as well as minorities.

“Even if the city’s interpretation of the ordinance were tenable, which it is not, we find it unlikely that the even and nondiscriminatory enforcement of the ordinance would result in the cleaning of Ms. Perez’s street three times in three days,” Culter wrote. “We are reviewing evidence that other residents of Selah who created similar chalk art supportive of the Black Lives Matter movement had their art removed within 30 minutes of creation; yet, when those same residents returned and drew rainbows and stars in the same location as their prior messages, it has remained untouched for six days and counting.”

Perez’s son, a 25-year-old Latino, was singled out from among other people using chalk art to support Black Lives Matter, Cutler said.

“It is not ‘graffiti’ that needs to stop, it is the city’s profiling of Selah’s activists and violation of their constitutional rights that must stop,” Cutler wrote.