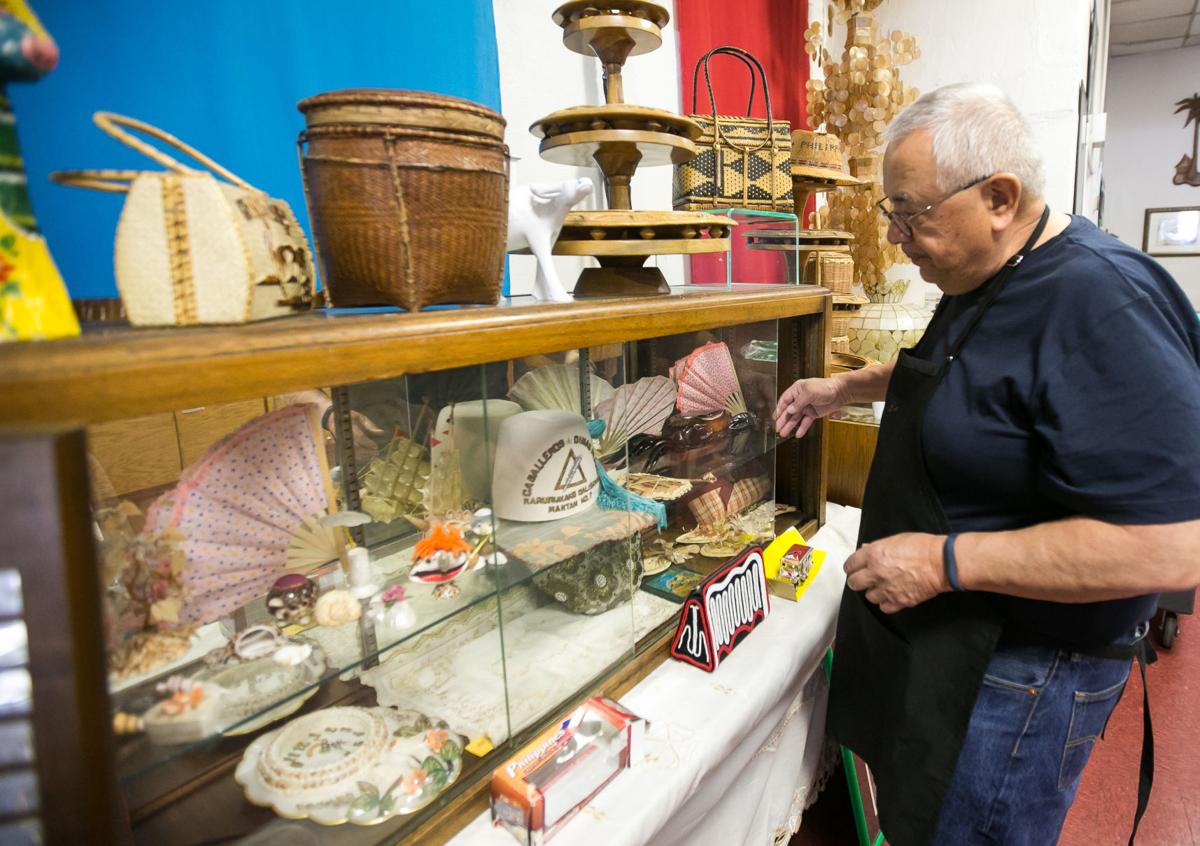 In a Thursday, April 18, 2019, photo taken at the Filipino Community Hall in Wapato, Pete Sotelo shows cultural artifacts donated by the Filipino community. 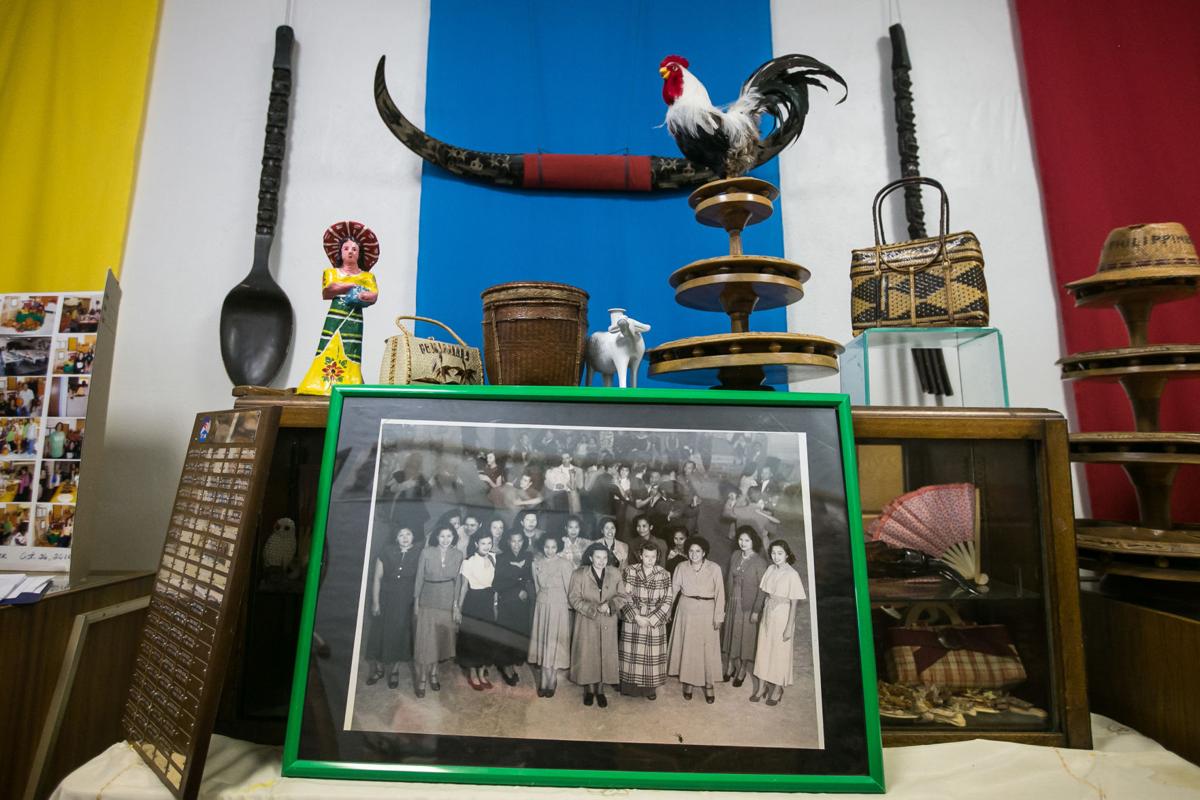 A framed photograph of the Filipino Women’s Club stands at the Filipino Community Hall on Thursday, April 18, 2019, in Wapato. 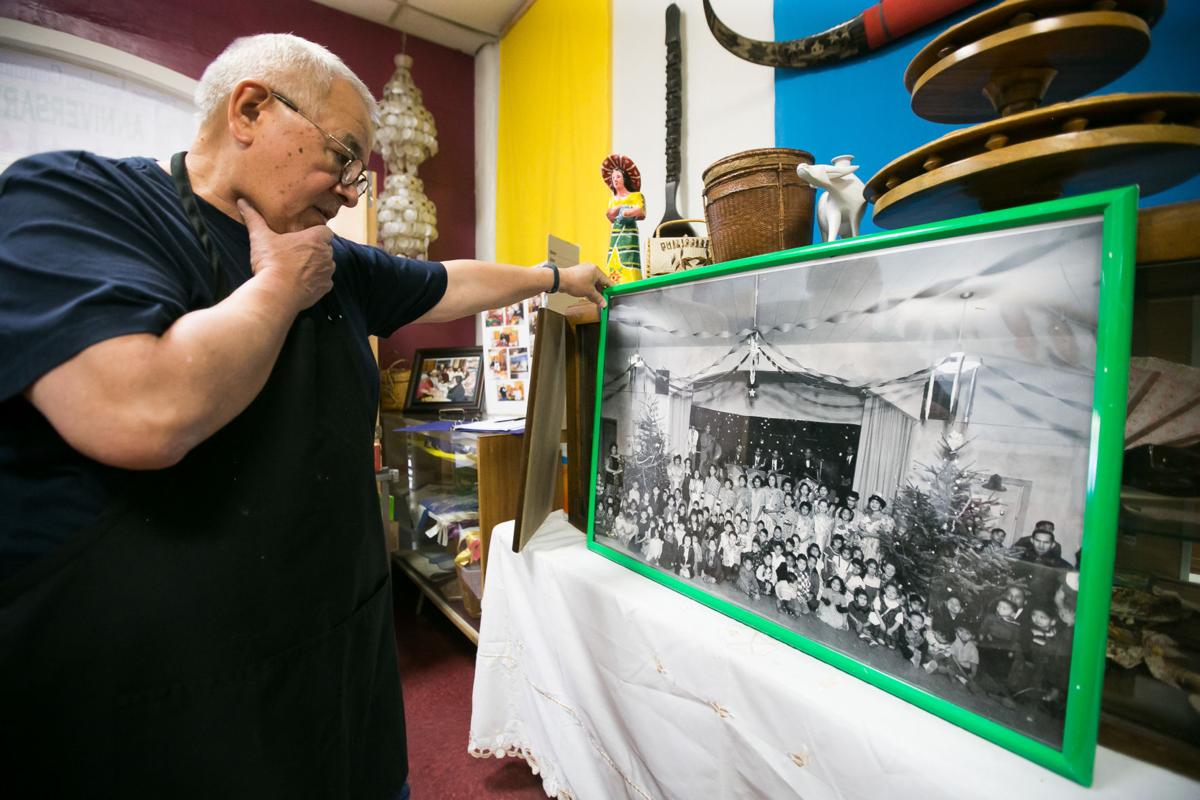 Pete Sotelo reminisces Thursday, April 18, 2019, in Wapato while looking at a framed photograph of the Filipino Community Hall’s Christmas program taken in December 1953.

In a Thursday, April 18, 2019, photo taken at the Filipino Community Hall in Wapato, Pete Sotelo shows cultural artifacts donated by the Filipino community.

A framed photograph of the Filipino Women’s Club stands at the Filipino Community Hall on Thursday, April 18, 2019, in Wapato.

Pete Sotelo reminisces Thursday, April 18, 2019, in Wapato while looking at a framed photograph of the Filipino Community Hall’s Christmas program taken in December 1953.

WAPATO, Wash. — On Thursday, a day after state lawmakers approved a bill declaring October as Filipino-American History Month, Rey Pascua’s face lit up as he greeted guests at the Filipino Community Hall in downtown Wapato.

Pascua had pushed for a bill designating October as Filipino-American History Month for nine years, only getting annual proclamations and resolutions.

But Wednesday, the House approved a Senate bill, SB5865, that makes the designation permanent statewide. Gov. Jay Inslee is expected to sign the bill into law within 10 days.

“So this makes it permanent,” Pascua said with excitement. “I’ll tell you, I’ve got at least 20 emails congratulating me.”

Pascua traveled to Olympia six times this year alone to advocate for the bill. A similar measure in the House died earlier this year. He learned Wednesday that the bill was among 100 up against a cutoff date, meaning it would die if it didn’t make it to the House floor for a vote the same day.

A friend in Olympia told him to get 10 people who knew House Speaker Frank Chopp to urge him to bring the bill to the floor. Pascua said he sent the emails, and the bill was among only five the House voted on that day. It was approved 98-0.

Pascua plans to step down this year from his longtime role as president of the Filipino-American Community of the Yakima Valley. His eyes welled with tears of joy when asked how passage of the bill made him feel.

Having the designation is important to Pascua and the rest of the Filipino-American community, he said. Early Filipino pioneers here and elsewhere faced harsh discrimination. Their lives were threatened if they farmed, and at one point they were prevented by federal law from owning or leasing land.

“This is a very important historical moment for Filipino-Americans,” Pascua said. “This makes it possible and important for future generations to study their history.”

Oscar Hillman, a Filipino-American and Army brigadier general, couldn’t say enough about Pascua’s efforts in pushing passage of the bill.

“We’re the third-largest Filipino community in America, so it means a lot to us,” Hillman said of Washington state. “We have a month to celebrate this.”

Pascua worked with Hillman, who lives in Tacoma, to identify area Filipinos and American-Filipinos who fought under the American flag in the Philippines during World War II.

The effort stemmed from a ceremony in October 2017 in Washington, D.C., when the Congressional Gold Medal was awarded to the more than 250,000 Filipino and Filipino-American veterans.

Pascua located 24 who lived in the Yakima Valley. Replica medals were given to those who were still alive and to the families of those who were no longer living.

The ship landed in an area now known as San Luis Obispo, Calif., according to the ship’s log, Cordova said.

“That’s why he chose October (for the designation),” she said.

Filipinos have been here longer than most realize. Many settled in areas near Barataria Bay, La., as early as the 1700s, Cordova said.

“Even though there’s an interesting history of us in the United States, we’re often overlooked,” she said. “Everybody looks at it like we’re recent immigrants. We’ve been here longer than a lot of people.”

He believes schools should do more to teach about all the state’s ethnic cultures. The Filipino hall is in Wapato on the Yakama reservation, where the tribe allowed Filipinos to lease and buy land to farm. That relationship built strong ties between the two cultures, Pascua said.

“I think school districts better get ready to teach about the diverse ethnic groups in the state,” he said.

Hillman said an interactive educational program about Filipino-American history is being devised at the Smithsonian Institution that will be available online.

He hopes the designation will encourage schools here to use the educational program.

“I would like to see this move forward with the Smithsonian,” he said.

At the rear of the Filipino Community Hall are glass cabinets filled with historical artifacts, photos of early Filipino pioneers, handwoven baskets and fans.

Flipping through large framed portraits leaning against a cabinet, Pascua stopped at a photo of the hall’s 1953 Christmas celebration. It’s filled with men, women and children.

“The fascinating thing about this one is the integration,” he said, pointing to the pictured children. “At that time, there were a lot of interracial marriages. There’s all kinds of color here — white, Yakama, Filipino.”