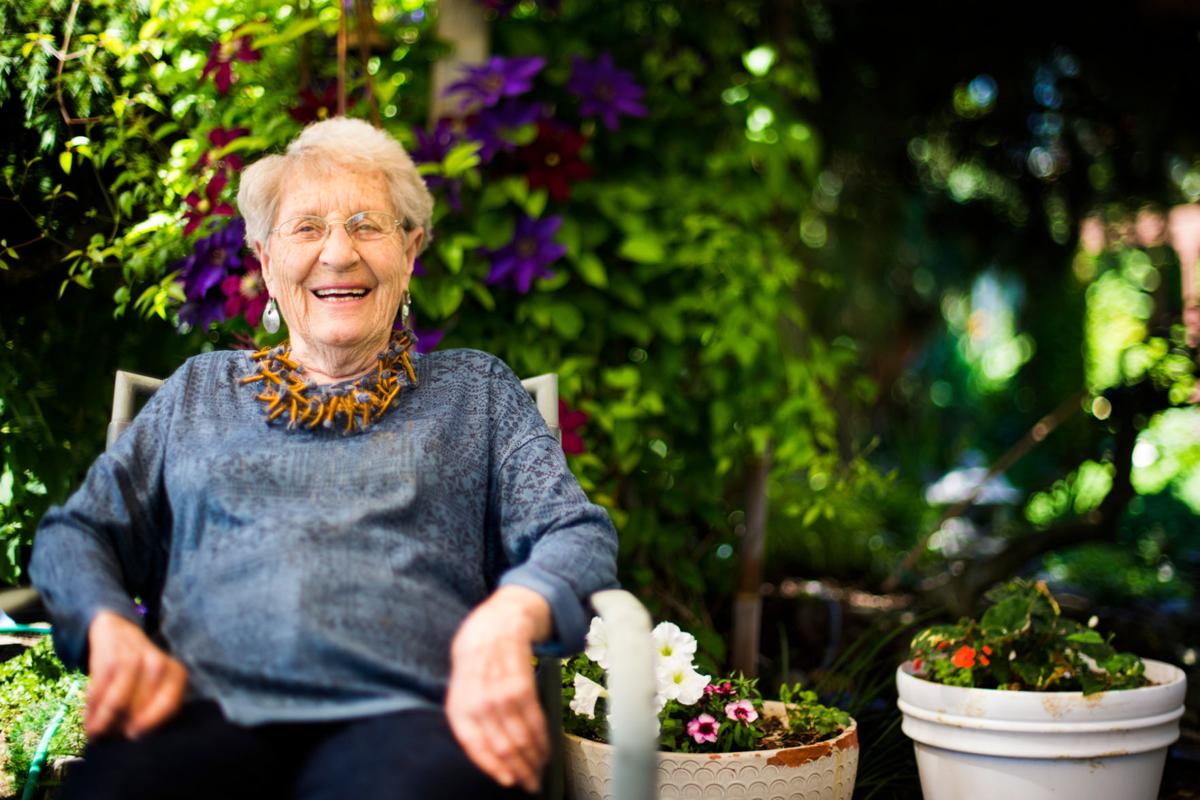 Long-time Selah resident Delma Tayer has been an integral part of the Yakima Valley arts scene. At 93, Tayer has worked as an artist and teacher for more than a half-century, and still creates and collects art. She is photographed here in her garden in Selah, Wash. on Friday, June 2, 2017. (JAKE PARRISH/Yakima Herald-Republic) 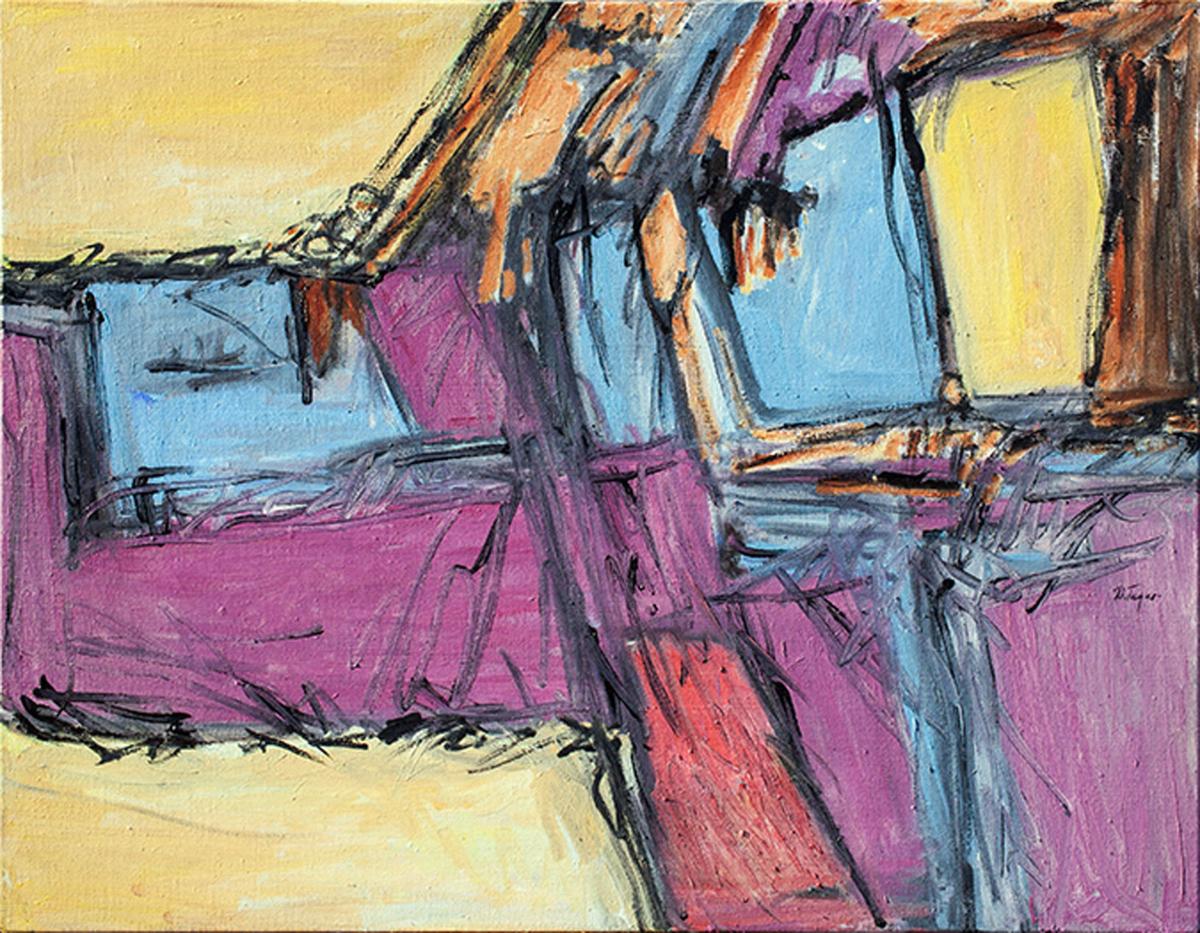 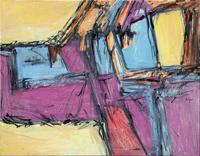 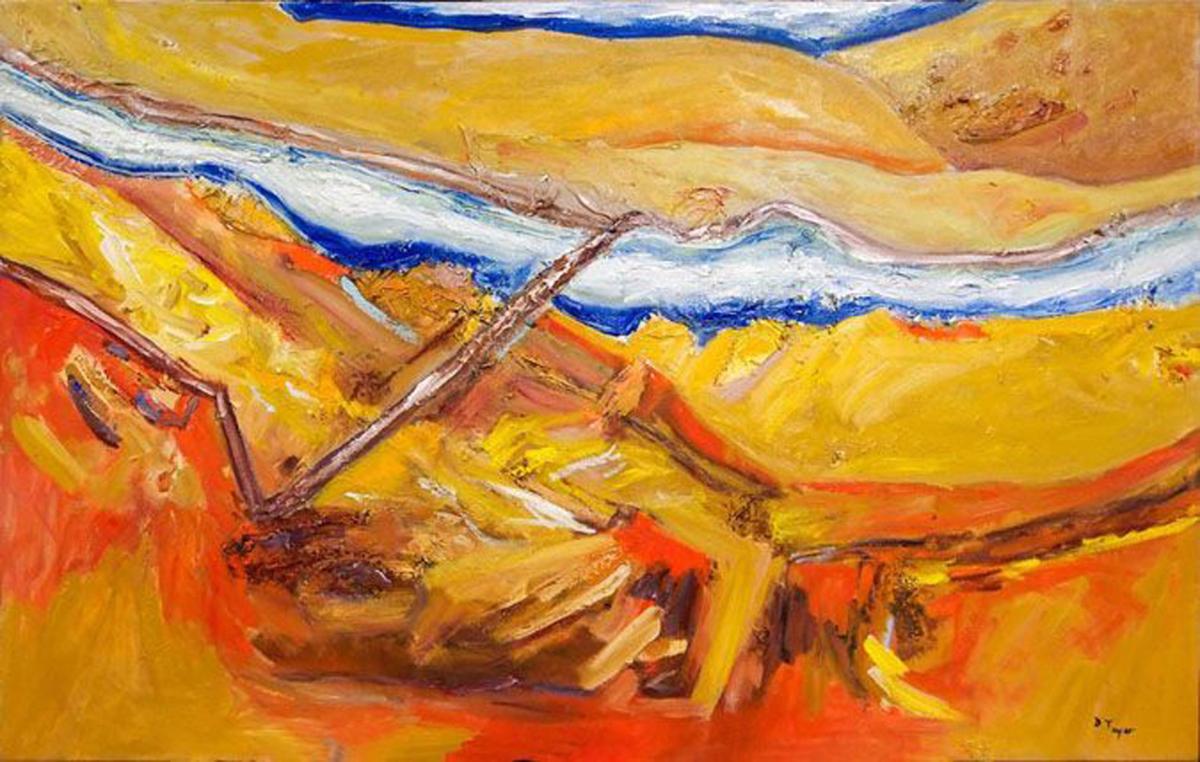 “A River Runs Through It” by Delma Tayer. 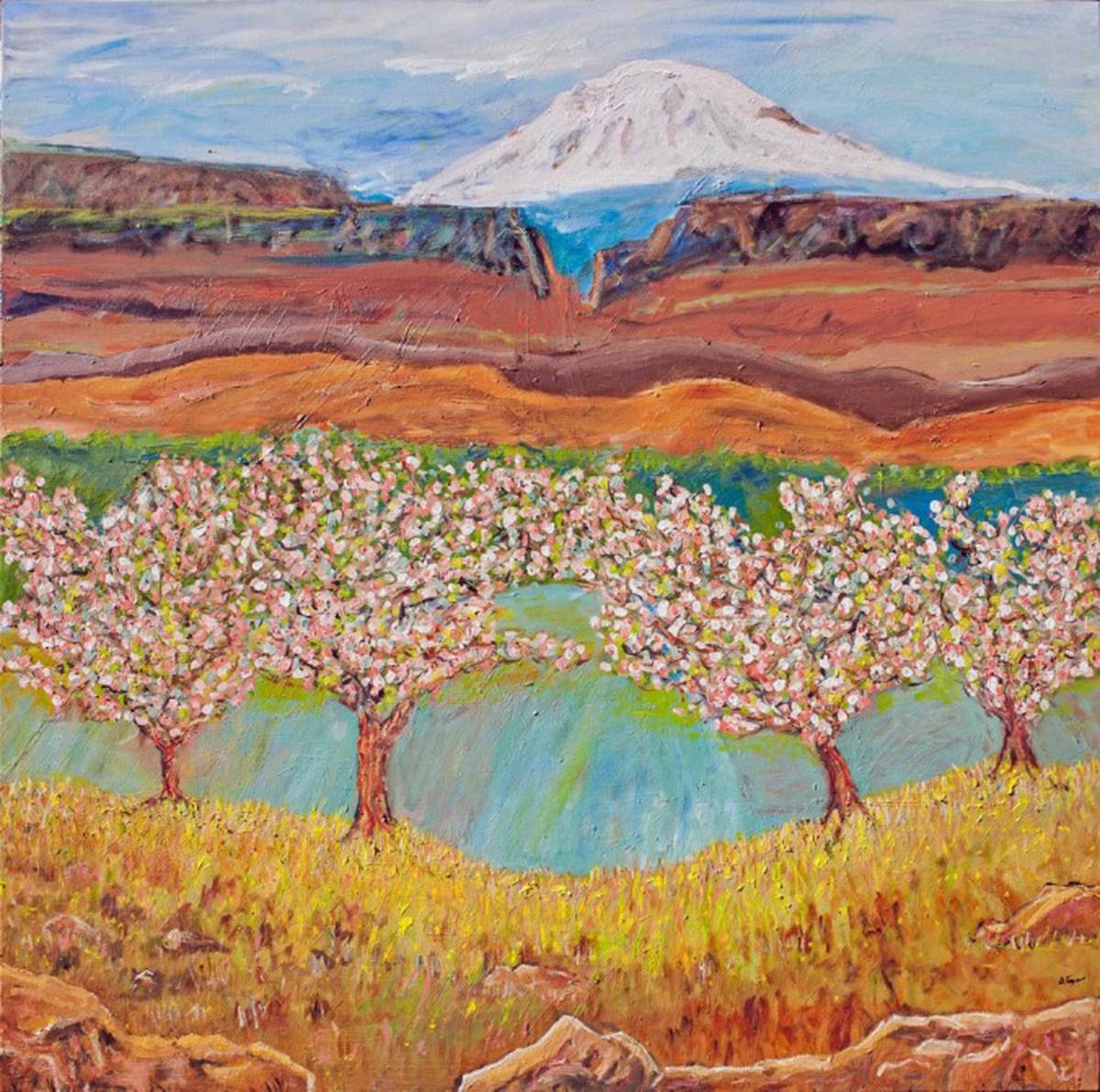 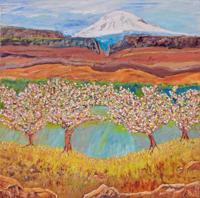 “Soring in Yakima” by Delma Tayer.

Long-time Selah resident Delma Tayer has been an integral part of the Yakima Valley arts scene. At 93, Tayer has worked as an artist and teacher for more than a half-century, and still creates and collects art. She is photographed here in her garden in Selah, Wash. on Friday, June 2, 2017. (JAKE PARRISH/Yakima Herald-Republic)

“A River Runs Through It” by Delma Tayer.

“Soring in Yakima” by Delma Tayer.

Prolific local artist Delma Tayer is 93 years old, a fact that must be noted in any news story about her, but her age is not the story.

In fact, it’s probably about the 150th most interesting thing about her. Don’t misunderstand: She was 5 when Black Tuesday kicked off the Great Depression and is still producing art in 2017 that is interesting. It’s a great detail. But it doesn’t define her.

Much more interesting is that she claims to have never been bored — not once in her life — because her curiosity and adventurous spirit haven’t allowed it. Or the fact that she taught literature for 27 years at Yakima Valley Community College and ran the on-campus Larson Gallery for 15, all while continuing to produce paintings, collages and pottery of her own. Or that she was raised on a sheep farm in Oregon, where an aunt’s wallpaper books first got her interested in art around age 10.

It’s difficult to overstate the impact Tayer’s wide-ranging career has had on art in the Yakima Valley, said Cheryl Hahn, a local artist and former Larson Gallery director. Tayer’s voracious appetite for travel and exploration allowed her to explore distant museums and galleries, which inspired her to introduce styles and techniques into her own work that had never been seen here before.

“If it weren’t for her and people like Charles Smith and Leo Adams, there would be a very diminished art scene indeed,” Hahn said. “She had the vision to go forward with work that was contemporary and abstract.”

And, like Adams and Smith, Tayer’s stature here is such that only her first name is necessary when talking about local art history. People here know Delma, Leo and Charles. Their works are viewable all over town in collections both public and private.

She has even more than that in the studio below her hilltop home in Selah. She works there virtually every day, not because she’s a tortured artist with a compulsion but because it’s her joy. The sense of accomplishment is important, but so is the process itself. She’s not sure exactly where that aspect of her personality — the desire to always be doing something — was instilled in her. But she’s been that way for as long as she can remember.

“I don’t think I’ve ever been bored in my life,” Tayer said. “I’ve always found something active to do. On the sheep ranch, they were so busy they’d turn us out in the morning as kids and we’d come home when it got dark. We’d swim, we’d play, we’d ride horses. I had a very active childhood, so I just think it’s a way of life for me to be active.”

She moved to Yakima in 1947 to marry Harold Tayer, whom she worked to put through dental school before returning to higher education herself at Central Washington State College (now Central Washington University) in the early 1960s. At Central, she studied alongside Smith under Sarah Spurgeon, the art professor for whom the CWU campus gallery is named.

Shortly thereafter she became a familiar face on the local art scene, showing regularly at the Yakima Library downtown.

“I was a part of the community very early on, even though I was busy teaching and doing other things,” Tayer said. “That’s where I made my friends. And Leo, when he grew old enough to be a part of it, became a good friend. And of course he was a student of Charles. We were just part of the art community. And of course they’re all seeking and doing things, so you get this mutual nourishment from it.”

That continued throughout the 1970s and ’80s as she took on the roles of Larson Gallery director and YVCC dean of arts and sciences. It wasn’t entirely a happy time, though. Tayer’s husband, Harold, died in 1984 during his second term as Selah’s mayor. And their son, Stephen, died of complications from cancer a few years later at 36.

Throughout all of that, she never stopped creating. To call her art an outlet or a distraction from those losses wouldn’t necessarily be wrong. But it’s not as though Tayer threw herself into art to deal with grief; she was already painting and sculpting and rearranging paper into collages every day before those personal tragedies. It’s just what she does and who she is.

When she retired from YVCC in 1990, she converted Harold’s old garage into the studio she still uses today. Tayer always stands to paint, never sits. The physicality of it is part of the art, she said.

“It’s active,” she said. “It’s action-painting. When you have a brush in your hand, the more movement you put into the brush, the more active the painting becomes. It’s a nice thing, because I’ve always been active. I’ve always worked. And when I come home at night from the studio, I’m tired. And that’s kind of a nice feeling, you know, especially if you’ve accomplished something that pleased you.”

“When I’m her age, I hope I have her determination and joy at continuing to do it,” Hahn said. “It takes a lot of effort to make art. You have to physically do it. You can have ideas out the wazoo, but you have to actually make it.”

Tayer had that same enduring passion as a teacher, said Terry Abeyta, a prominent Yakima attorney. He studied under her at YVCC from 1969 to 1971, taking as many literature and art classes from Tayer as he could.

“She was inspirational,” Abeyta said. “There’s a difference between teachers who teach as a job and those who are inspired teachers. That passion shows through. She just makes you want to learn — and to continue learning after you leave her class.”

When he returned to Yakima after law school, Abeyta took a job with the firm Brooks and Larson. The office had a Tayer painting on the wall. He hadn’t seen much of his old teacher’s work before, but he was immediately enamored of it. He now owns at least 10 Tayer originals, drawn to her work for its eclecticism and the fact that it has continued to evolve even as its creator reached her 90s.

“She’s such a great role model of staying creative and open-minded and involved,” Abeyta said.

That sort of appreciation from students and from art appreciators feels good, Tayer said. It’s always nice when fans of hers approach her to introduce themselves, she said. It’s also nice that people draw inspiration from her continued dedication to her work, even at 93. But she doesn’t think too much about that herself.

“I know people keep saying that,” Tayer said. “But I’ve just always been that way.”

YAKIMA, Wash. -- The ambiance of enjoying some escargot at Carousel French Cuisine was recently enhanced by floor-to-ceiling paintings by loca…