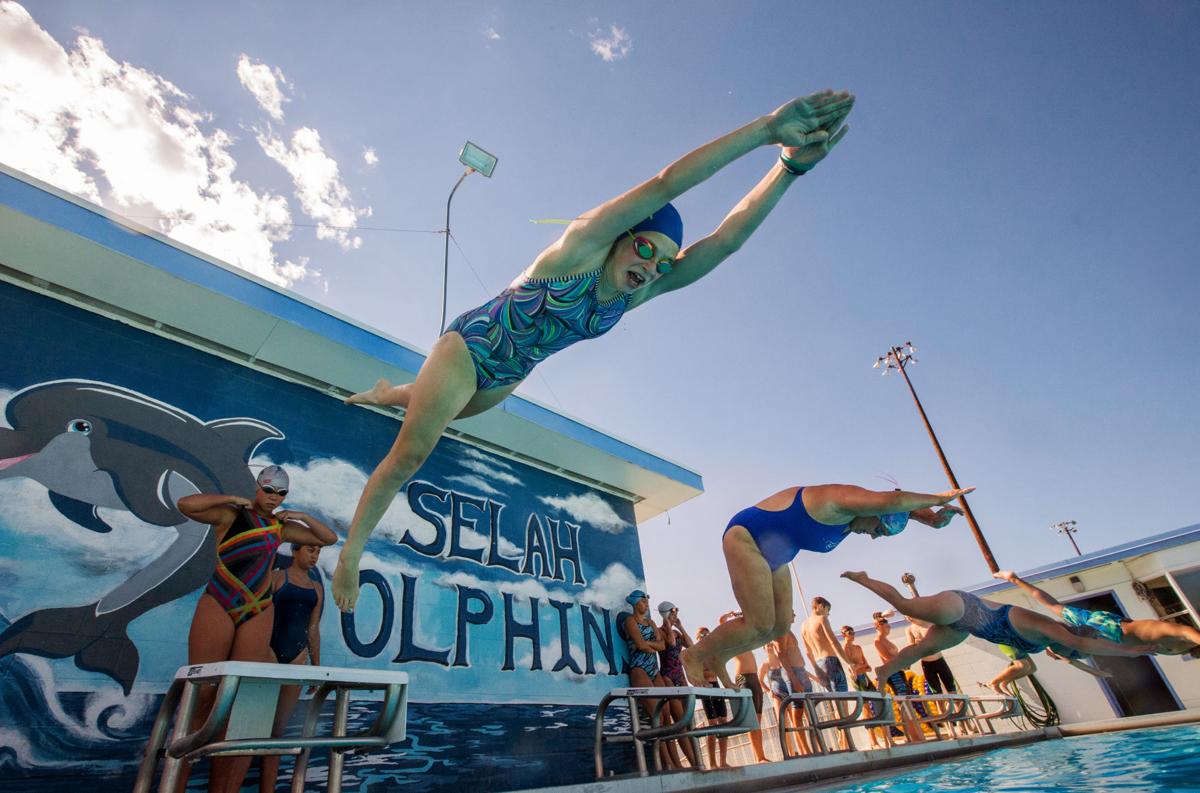 Selah Dolphin swimmer Ellie Richardson, left, practices diving with other teammates during a swim practice at the Selah pool in Selah, Wash., Friday, July 15, 2016. Head coach Leslie Brown said, "If we don't have a pool it would pretty much kill our team." (SOFIA JARAMILLO/ Yakima Herald-Republic) 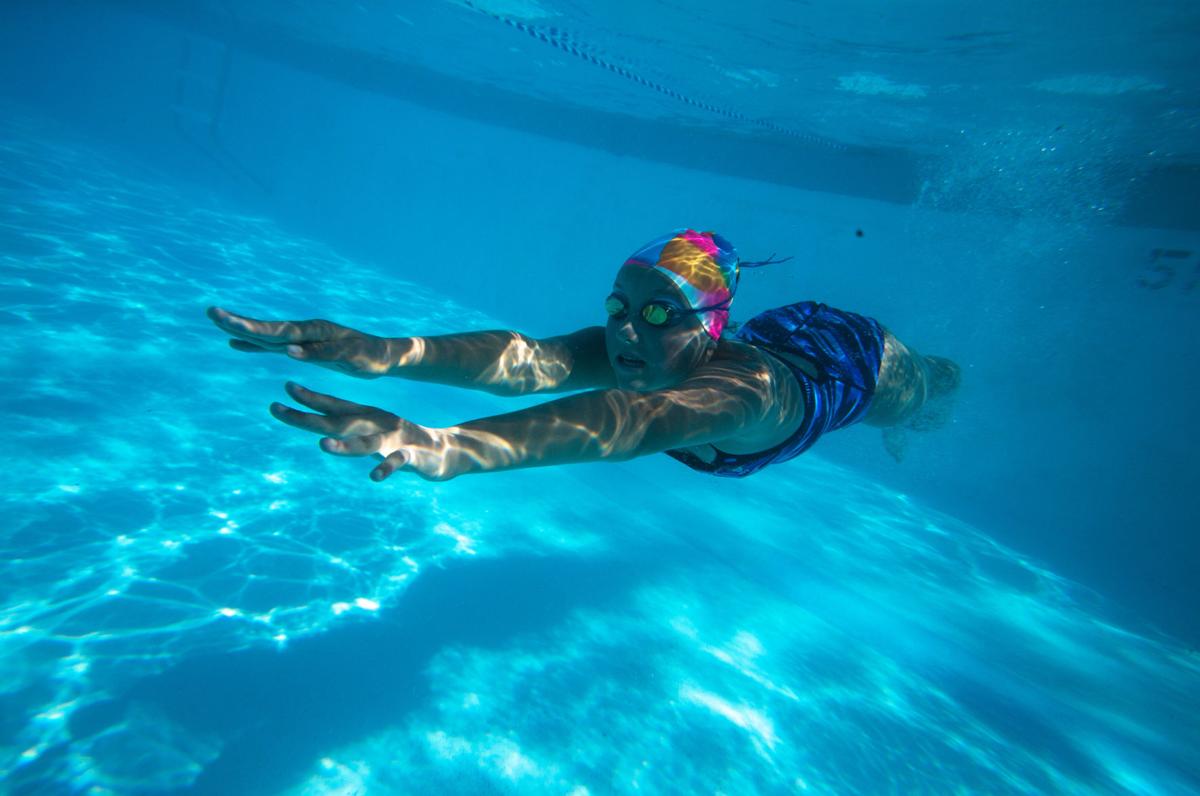 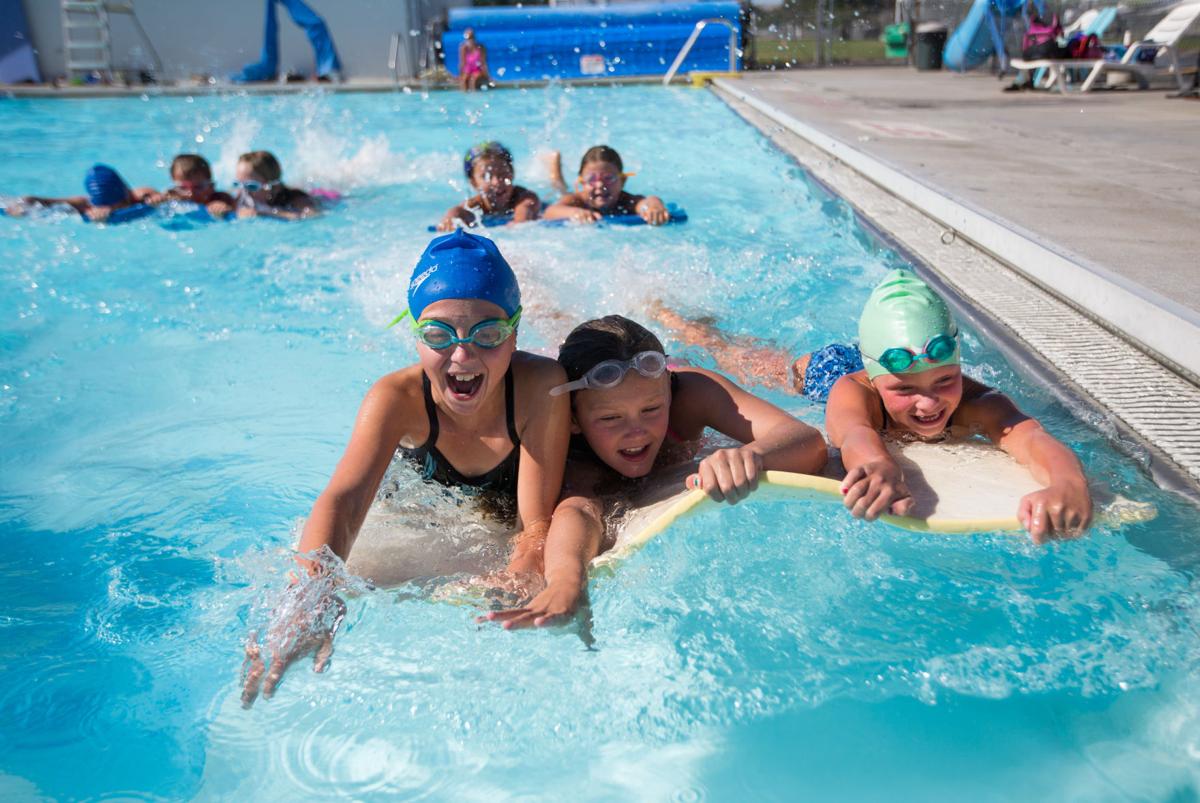 Selah Dolphin swimmer Ellie Richardson, left, practices diving with other teammates during a swim practice at the Selah pool in Selah, Wash., Friday, July 15, 2016. Head coach Leslie Brown said, "If we don't have a pool it would pretty much kill our team." (SOFIA JARAMILLO/ Yakima Herald-Republic)

SELAH, Wash. -- Leslie Brown and others involved with the Selah Dolphins thought the swim team was going to become a casualty in a dispute between city officials and the board that funds the Selah Pool.

When City Administrator Don Wayman suggested not opening the pool next summer to allow for construction of the new aquatic center at Wixson Park, Brown, the Dolphins coach, said it would have devastated the 180-member team.

“I estimate many of them would not have returned” for the next season, Brown said.

While a compromise has been reached with the city and the Selah Parks and Recreation Service Area board to begin construction Aug. 1, 2017, Brown and others say there are still points of contention — most, they say, raised by Wayman — that appear to be hobbling the project.

“It’s like it’s the entire community against one person,” said Bill Callahan, vice chairman of the city’s Parks and Recreation Board and a parent of Dolphins team members.

Wayman said he’s not trying to derail the project. Rather, he said he’s ensuring that SPRSA puts together a project that fits its $6.2 million budget as well as protects the city’s interests in Wixson Park.

“What I am is the guy who is dealing with the realities of economy, the budget and how much labor and materials costs,” Wayman said.

Likewise, Kelliann Ergeson, SPRSA’s chairwoman, said the board and the city’s relationship is getting better as both entities try to get the best possible project for the money.

“I would say we are continuing to work on moving forward with the project,” Ergeson said. “At times, it has been challenging, and there have been difficult conversations, but it is a challenging project.”

In November, SPRSA won voter approval for a $6.2 million bond to build a new aquatic center to replace the aging pool at Wixson Park. SPRSA, a tax district that has the exact boundaries of the Selah School District, is governed by a seven-member board appointed by Yakima County, the school district and the city.

The proposed aquatic center would have an eight-lane, 25-yard competition pool that could be covered for year-round use, a 25-yard multiple-use pool, a beach-entry play pool, two water slides, a deck and a pool house.

SPRSA based the proposal on a community survey and a consultant’s estimate of how much it would cost to build.

Brown said the covered pool is an important feature that should be maintained. Currently, she said, the Selah High School swim team has to go in the evenings to Lions Pool in Yakima for practice, which she said puts a strain on team members.

A covered pool in Selah would allow the team to practice right after school, and possibly attract other teams in the area to train there as well.

The first patch of rough water in the project was earlier this year, when the city refused to sign a new agreement to maintain the pool until it was presented with formal plans for the project. But Ergeson said the board wanted the city’s signed commitment before hiring an architect to draft plans.

A compromise was reached in that the city and SPRSA formed a joint committee to select the architect.

SPRSA is expected to approve a contract Monday with NAC Architecture, the same firm that designed Selah High School’s addition and the new Eisenhower High School in Yakima.

But Wayman has asked SPRSA to have the architect design the pool to fit a 45,000- to 54,000-square-foot tract that runs east-west and includes the original pool.

SPRSA’s proposal called for a north-south axis on 57,000 square feet that would also include roughly a half-acre of grass for picnics.

Wayman said he and Mayor Sherry Raymond did not want the aquatic center interfering with the park’s picnic areas and its street view.

The grass area in the original proposal could create maintenance problems for the pool and its grounds, Wayman said, as well as create a “park within a park” that would detract from Wixson Park.

He also recommended not opening the pool next year to allow construction to take place. The original proposal to do as much work as possible while the pool was open would be too risky, Wayman said.

“We would have men in hard hats on one side, and kids in water wings on the other side,” Wayman said.

But after close to 85 people, most of them Dolphins members and supporters, came to a July 12 council meeting to express their displeasure, the city and SPRSA met with NAC and agreed to postpone construction until after Aug. 1, 2017, when the swim season closes.

Brown and Callahan said the pool schedule was one example of how Wayman appears to be obstructing the project.

Another problem critics noted is Wayman’s insistence that SPRSA may have to pare down the project to remain within budget, possibly even losing the pool cover.

Wayman said the $6.2 million was based on a consultant’s estimate, which estimated soft costs — architect’s fees, engineering costs, environmental permits — at $700,000, while a preliminary estimate from NAC showed the same costs at $1.2 million. The pool construction would be more than $4 million, Wayman said, without the cover.

The project may have to be pared down, either reducing the number of pools or eliminating the covered-pool option, Wayman said.

Ergeson said what was presented to the voters was a conceptual plan that can be adjusted to meet the budget. She said the board understood that construction and material costs could change between the time the bond was approved and the contracts signed.

“It’s true we don’t know which features are affordable in our $6.2 million budget, but (the board) is confident we can get the best components for the money,” Ergeson said. She said the board will rely on NAC to help it install as many of the proposed amenities as it can within the budget.

Wayman said the city will also have its engineer and planner sit on the design committee.

SELAH, Wash. — Selah’s proposed aquatic center will have to be designed to not block the park’s view from South Third Street.