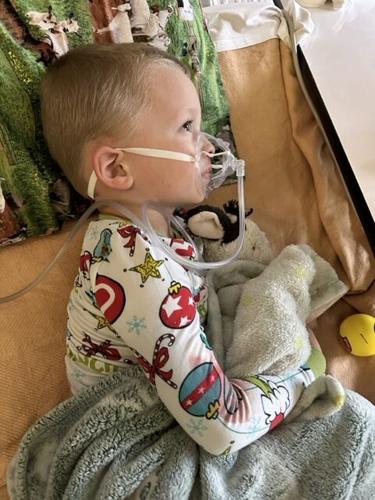 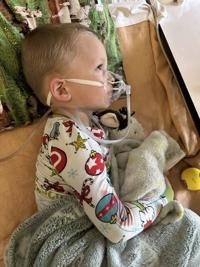 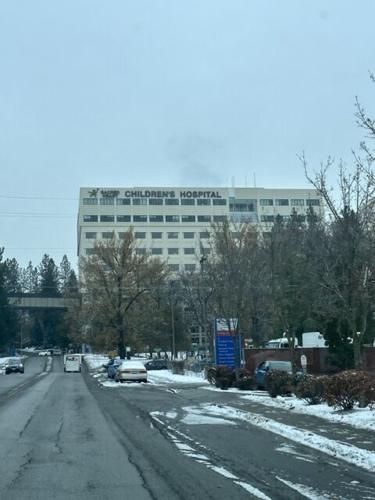 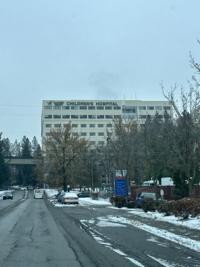 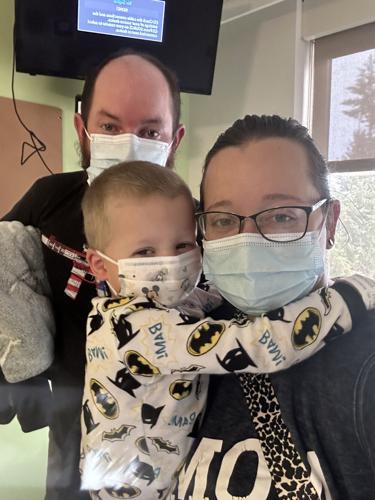 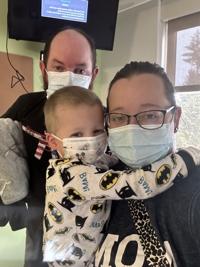 Josh Zimmerman (top) along with his wife and son Rachelle and Colt, prepare to leave their son's hospital room inside Sacred Heart Children's Hospital in Spokane. Colt had spent two days in the hospital and was discharged on Friday, Nov. 25. 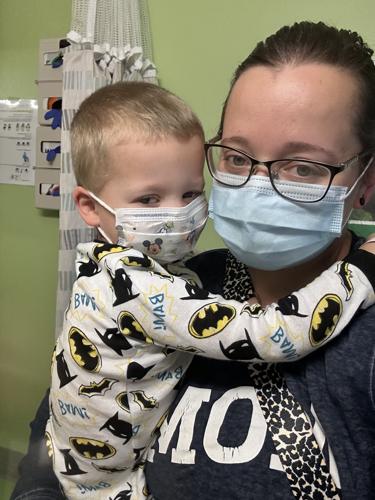 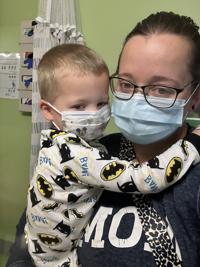 Rachelle and Colt Zimmerman take a picture on Friday, Nov. 25 after receiving the news he was being discharged from Sacred Heart Children's Hospital in Spokane while being under observation after a moderate case of RSV. 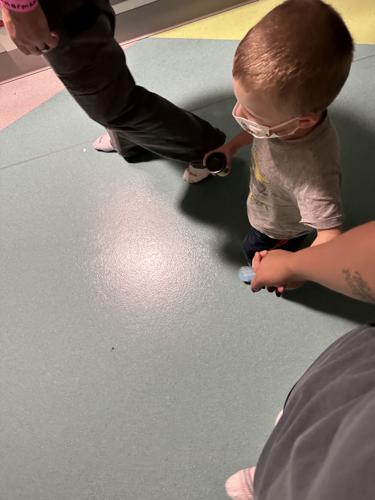 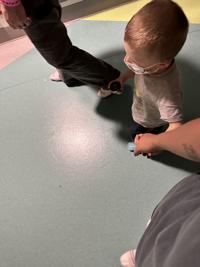 Colt Zimmerman goes on a walk with his mom and a nurse while inside Sacred Heart Children's Hospital in Spokane on Thanksgiving day, Thursday, Nov. 24. After spending one night there, nurses suggested Colt try some light physical activty to get oxygen flowing to his lungs.

Josh Zimmerman (top) along with his wife and son Rachelle and Colt, prepare to leave their son's hospital room inside Sacred Heart Children's Hospital in Spokane. Colt had spent two days in the hospital and was discharged on Friday, Nov. 25.

Rachelle and Colt Zimmerman take a picture on Friday, Nov. 25 after receiving the news he was being discharged from Sacred Heart Children's Hospital in Spokane while being under observation after a moderate case of RSV.

Colt Zimmerman goes on a walk with his mom and a nurse while inside Sacred Heart Children's Hospital in Spokane on Thanksgiving day, Thursday, Nov. 24. After spending one night there, nurses suggested Colt try some light physical activty to get oxygen flowing to his lungs.

Rachelle Zimmerman gripped the steering wheel of her car as she left Yakima on a Wednesday morning. She was on her way to see her 3-year-old son, Colt, who just hours before had been airlifted to Sacred Heart Children’s Hospital in Spokane.

Since Saturday, Colt had been lethargic, experiencing heavy coughing fits and having trouble breathing. Now, Colt and his parents would have to spend Thanksgiving at a hospital far from home.

Colt was suffering from Respiratory Syncytial Virus Infection, a virus that presents similarly to a cold and is nearly as common. Though RSV can affect people of all ages, young children, typically under 2 years old, are more susceptible to the virus. That’s because in young children, the virus causes inflammation of airways no larger in diameter than a pinky, or about 6-10 millimeters.

Airway inflammation is what set Colt on his path to Spokane. Between COVID-19 and RSV, the Zimmerman boys had spent the last two months trading viruses. Rachelle’s oldest, Brayden, who had just started kindergarten in August, had already accumulated 13 absences due to sickness by Thanksgiving.

Unfortunately, Colt’s visit to the hospital was not the first of the season for the Zimmermans. Days before, his youngest brother, 2-year-old Rhett, had been rushed to the ER for similar symptoms.

“My youngest, Rhett, he was in the ER on Sunday,” Rachelle said. “He was in for a low pulse ox (blood oxygen level). Since my oldest had already had RSV, we had one of those finger readers for pulse ox. We kept getting a low reading and he was just having a hard time retracting and breathing. You could tell when you lifted up his shirt you could kind of see his chest going into his ribcage. He had a lot of mucus buildup, it was constant. We could just tell he was tired.”

Once inside the Yakima Valley Memorial Emergency Department, Rhett’s vitals stabilized. He remained in the hospital for a few hours. As Rachelle had suspected, her son had tested positive for RSV. A chest X-ray would later show that Rhett’s right lung was in the early stages of pneumonia.

In the days leading up to Colt’s hospitalization, both Rachelle and Josh had to take multiple days off work to care for their son just as their second youngest started showing similar symptoms.

By then, the Zimmermans had fended off a 103-degree fever, a case of pink eye, a trip to a family doctor followed by a trip to the ER, and multiple cases of COVID-19 and RSV.

Rishi Mistry, a pediatrician and medical director at Yakima Pediatrics, explained why a virus as common as RSV has seemingly taken much of the country by storm.

He said the lockdown caused by COVID-19 in early 2020 and the health precautions that followed like masking and avoiding large groups of people led to a lull in RSV cases over the last two years.

A visit to the Centers for Disease Control and Prevention RSV-NET website shows as much. The rate of RSV-associated hospitalizations in the U.S. sat at nearly zero for most of 2020. In November of this year, hospitalizations rate quintupled in a matter of weeks, far outpacing RSV’s usually slow build-up of cases through the early autumn and winter.

Given that most children will have been infected with RSV before they’re 2 years old, Mistry said it’s no surprise young children who may not have been exposed to RSV in the last two years would be getting sick now, just a few months after the start of school.

“So the last couple years have been really odd. Especially in 2020, RSV wasn’t circulating how it typically does. People weren’t going out and they were wearing masks and that was naturally preventing the disease from spreading,” Mistry said.

“This year we’re seeing RSV around the regular time we usually do so it looks like a typical RSV season. The issue, though, is young children the last two years haven’t been exposed to the typical number of general viruses including RSV, so this year is a particularly bad year because they don’t have natural protection from all the respiratory viruses they would usually encounter.”

Though Rachelle isn’t sure if her two youngest sons had been infected with RSV before, she did note their symptoms were more severe than when her oldest son was infected.

By the time Rhett was back from Memorial, Colt’s symptoms started getting worse. At home, his blood oxygen level was hovering around 88. Colt’s body was struggling to absorb oxygen.

Having spent the last week in constant contact with Colt’s pediatrician, the Zimmermans decided it was time to take Colt to the hospital.

“That Tuesday night my husband got the pulse ox and it kept reading 88 and his (Colt’s) heart rate was almost 130, I think. That’s high for kids,” Rachelle said. “So my husband said ‘I’m done with this shit,’ because you know, he was just as tired as I am having the kids so sick since August.

“He got into Memorial and they took Colt’s vitals. When they took his pulse ox, they noticed it was in the mid-’80s and they didn’t make him go sit back down. They said we need to get a room now.”

Colt was tested for RSV and came back positive, Rachelle said. Doctors found a room for Colt and put him on oxygen. After a few hours, his heart rate stabilized and his blood oxygen levels began to rise. Doctors told the Zimmermans they wanted to keep Colt in the hospital overnight, maybe even for a few days.

“The doctors then looked at Josh and told him there were no rooms available for his son. They said they wanted to monitor him but the only pediatric bed they have in Washington state is in Spokane at Sacred Heart. My husband was pushing for us to stay since we were looking at an emergency flight to Spokane that would be a couple of thousand dollars and we didn’t know if insurance was going to cover that,” Rachelle said.

Doctors told the Zimmermans that staying in Yakima could mean not having a bed available if things were to get worst for Colt. Were anything to happen, the parents would be facing a multiple-hour drive for access to a hospital bed.

“My husband and I talked it over, hoping that someone would get discharged at Memorial so Colt could get a bed. Eventually, we just agreed and said to ourselves, it’s our son. We have to go. We can figure out insurance later and get it taken care of. So we said OK, let’s go ahead and do it,” Rachelle said.

Early in the morning, after waiting hours for the runway to defrost, Josh and Colt took off on an airplane for Spokane, where Rachelle would eventually meet them. Rachelle’s mother was left to care for Brayden and Rhett.

“It felt like I was stretched thin because I had a kid at home who had RSV and was on antibiotics for pneumonia but then I got another kid whose got low oxygen levels at a hospital in another city and he needs me too even though he’s got his dad,” Rachelle said. “He doesn’t understand what’s going on. I FaceTimed him last night when he was in the ER and he was laying there with the nasal cannula on his face and he was crying, saying, ‘I want to go home and I want my mom,’ and it broke my heart.”

After seven sleepless days with multiple visits to the ER and family doctors as well as an airlift and two overnight stays, the Zimmermans returned home the day after Thanksgiving. Colt had been given the green light. Doctors said the worst of the sickness had passed.

While reactions to RSV like Colt’s are relatively uncommon, in some cases, they can be even more severe. Mistry explained that even so, the spread of RSV is relatively simple to avoid.

“It’s important to make sure that those who can, that are old enough, can cover their mouth properly by coughing into their elbows, washing their hands very frequently and properly,” Mistry said. “If you’re sick, you need to stay away from large groups and wear masks. RSV spreads by droplets through sneezing and coughing so those simple steps can help prevent infection.”

Though COVID-19, RSV and the flu have been spurring talk of a “triple-demic,” Mistry said he is not aware of any link between the viruses other than the fact they are all viruses. Currently, no studies exist showing a link between the viruses where having one may make someone more susceptible to the other. Much like with the common cold, there is no specific treatment or cure for RSV.

On Monday, Nov. 28, Rachelle said both Rhett and Colt seemed to be returning to their normal selves. Rhett had a couple of days left on his pneumonia medicine.

“I just think this is probably the end of all this crap and we’re just trying to get over that last little bump. We’re all home, I sent my oldest back to school now. We are just trying to get back into the momentum of things and make sure everyone is healthy and back to normal,” Rachelle said.

Santiago Ochoa is a bilingual journalist covering health care access at the Yakima Herald-Republic in Yakima, Washington. Before joining the Herald, Ochoa reported for Flint Beat in Flint, Michigan, covering the city’s Latino population—health care, education, community building and more, and winning top honors in the Michigan Press Association’s feature category. He served as photographer and later editor for his college newspaper, The Michigan Times. When he’s not working, Ochoa enjoys cross-country trips on his motorcycle, going to the movies, reading and skiing.