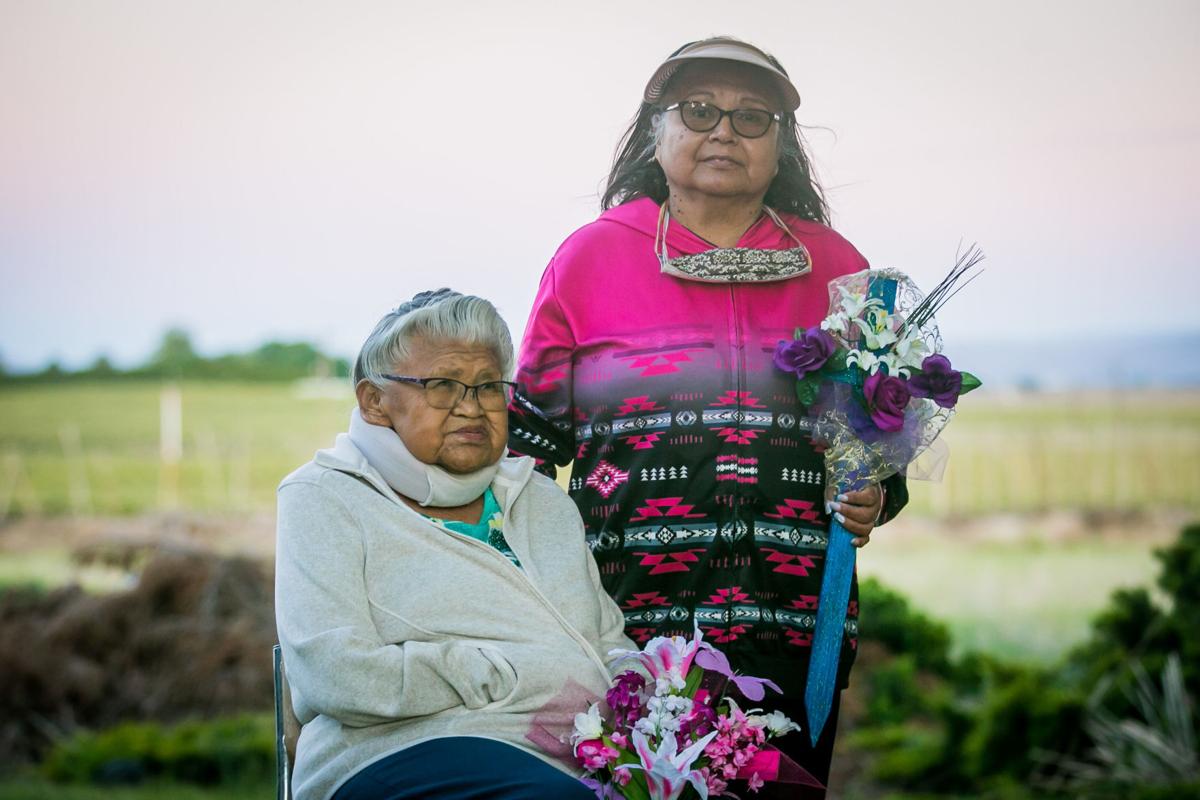 Levina Wilkins, left, and Lila Whitefoot pose for a portrait Friday, May 28, 2021, at Levina’s home in Harrah, Wash. 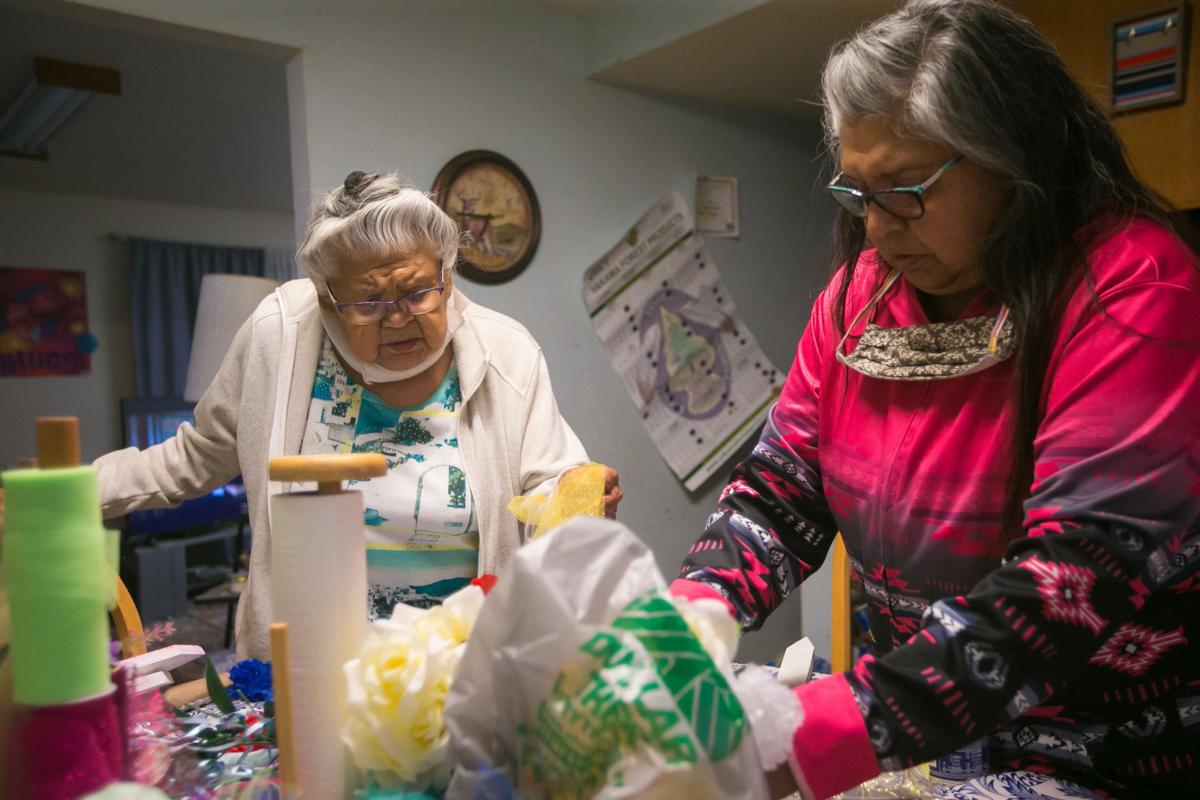 Levina Wilkins, left, helps Lila Whitefoot decorate a small white cross with ribbons and fake flowers Friday, May 28, 2021, at Levina’s home in Harrah, Wash. Whitefoot and Wilkins along with many of their family members build and decorate crosses every year to place at a tribal cemetery in honor of their loved ones who has passed away. 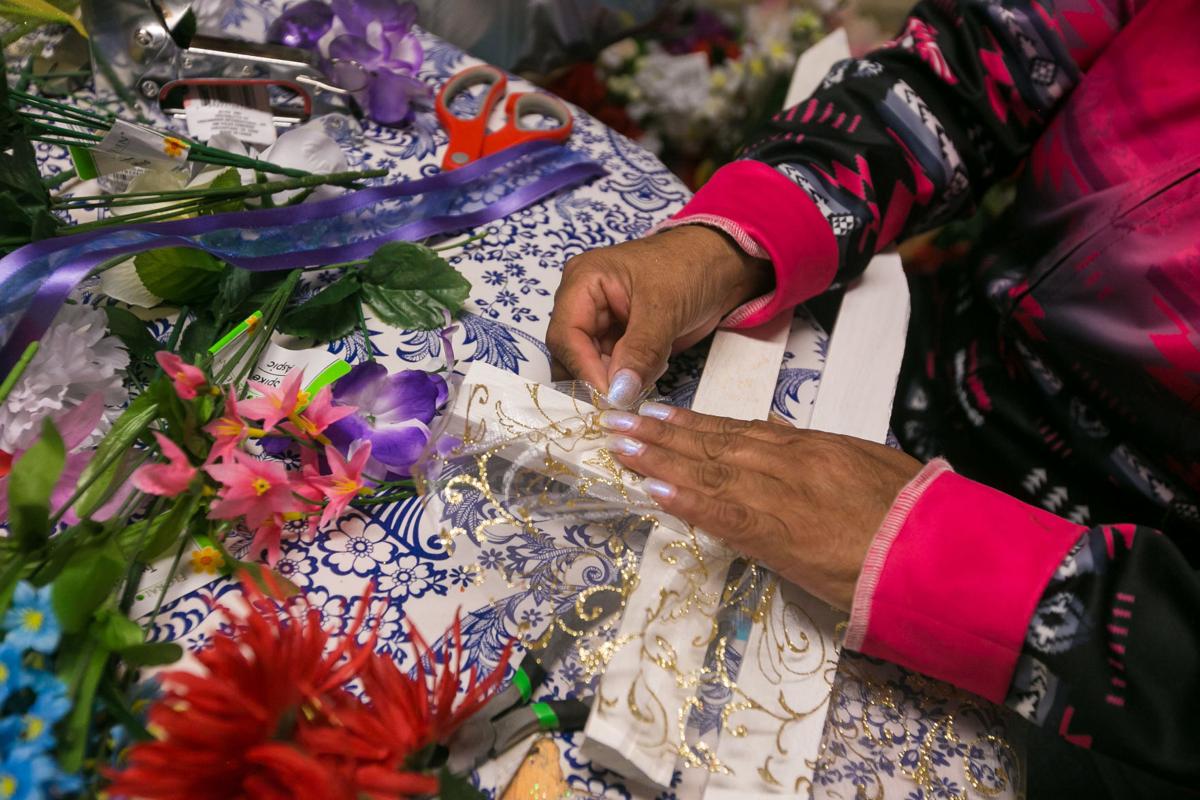 Lila Whitefoot decorates a cross with ribbon Friday, May 28, 2021, at her auntie’s home in Harrah, Wash. 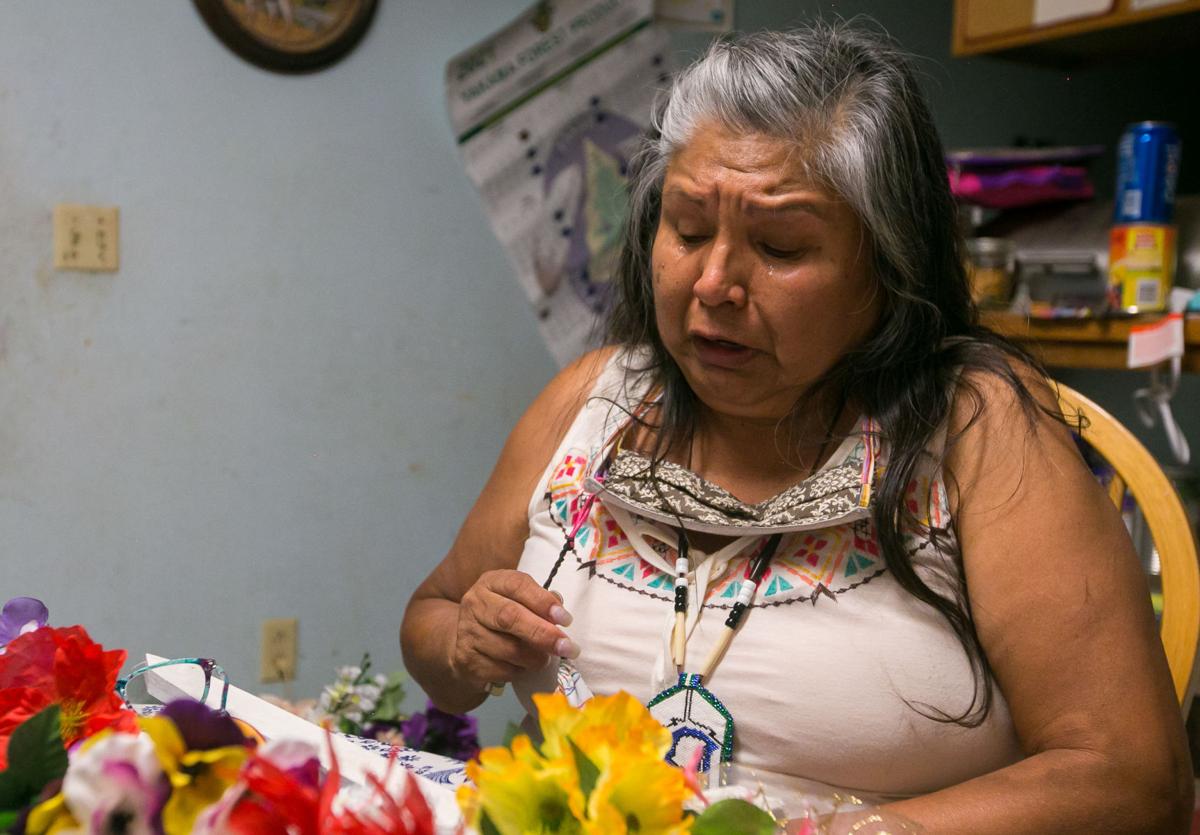 Lila Whitefoot weeps as she reminisces about her sister Agnes Faye Whitefoot Lora Friday, May 28, 2021, at her auntie’s home in Harrah, Wash. Agnes was 38 when she was murdered on April 15, 1994, in the Yakama Nation Housing Authority’s Apas Goudy rental housing park in Wapato.

Levina Wilkins, left, and Lila Whitefoot pose for a portrait Friday, May 28, 2021, at Levina’s home in Harrah, Wash.

Levina Wilkins, left, helps Lila Whitefoot decorate a small white cross with ribbons and fake flowers Friday, May 28, 2021, at Levina’s home in Harrah, Wash. Whitefoot and Wilkins along with many of their family members build and decorate crosses every year to place at a tribal cemetery in honor of their loved ones who has passed away.

Lila Whitefoot decorates a cross with ribbon Friday, May 28, 2021, at her auntie’s home in Harrah, Wash.

Lila Whitefoot weeps as she reminisces about her sister Agnes Faye Whitefoot Lora Friday, May 28, 2021, at her auntie’s home in Harrah, Wash. Agnes was 38 when she was murdered on April 15, 1994, in the Yakama Nation Housing Authority’s Apas Goudy rental housing park in Wapato.

Agnes Faye Whitefoot Lora was a wonderful dancer. As a child, she could accurately mimic all kinds of dances. If her grandpa seemed down, Agnes would jump into action to cheer him up.

Her older sister, Lila Whitefoot, likes to remember her that way — not the horrifying way she died.

“My younger sister was taken away from us in a tragic way and we must speak out,” Lila said March 25, when she and other relatives of Agnes and Daisy Mae Heath gathered at Legends Casino Hotel in Toppenish to remember and honor the two women who meant so much to them.

Agnes, a mother of three, was 38 when she was murdered on April 15, 1994, in the Yakama Nation Housing Authority’s Apas Goudy rental housing park in Wapato. Found unconscious around 3:30 a.m. in the 400 block of Lorena Lane, Agnes died about seven hours later in surgery at St. Elizabeth Medical Center in Yakima.

She died of massive internal injuries and bleeding, according to Leonard Birkinbine, the Yakima County coroner at the time. It looked like she was struck with a blunt instrument, he said. The tribal police chief said it appeared she had been sexually assaulted.

Though houses in Apas Goudy are close, nobody answered her cries for help, Lila said.

“For my sister, to go the way she left, was really tragic. Nobody stood up for her,” she said, noting that April 15 was their late mother’s birthday. “Nobody got up and defended her and out of all those guys that took her life, not one of them stood up against each other.

“They all joined in and took part of the brutal assault that she went through.”

Two Native juvenile males were arrested that June in connection with Agnes’ death, according to news reports. Both appeared before U.S. Magistrate Judge James Hovis. All proceedings were closed to the public because they were juveniles.

Not all involved were convicted, Lila and others said. Though two were arrested, “Only the youngest guys went to prison for it, only juvenile hall,” she said. She and her siblings, cousins and others who knew and loved Agnes don’t think justice was served.

“The perpetrators are walking free and they’re walking among us. ... We have to break the silence. That is my prayer today, for them to have a conscience,” Lila said.

The physical and sexual violence that Indigenous women and girls throughout the United States have suffered for decades is staggering.

“American Indian women are the most battered, raped, stalked and murdered group of women in the United States; 70% of the time by non-Native offenders,” says the National Indigenous Women’s Resource Center in its fact sheet on sexual violence against women and children in Indian Country.

On the 1.3-million-acre Yakama Reservation in Yakima and Klickitat counties, dozens of Native women have disappeared, drowned and died of hypothermia in remote locations.

Several have died of blunt force trauma. They include Minnie Andy, 31, who was murdered in July 2017 after being assaulted at 70 Egan Road in Wapato, and Destiny Louise Lloyd, 23, of Wapato. Lloyd was reported missing on Christmas Day 2017 and her body was found four days later off Marion Drain Road near Harrah Road south of Harrah. She died of a basal skull fracture.

Naoma Alexandra George, a 33-year-old mother of eight, was beaten to death in an alley in Wapato early on Oct. 15, 2013. And 44-year-old Barbara Celestine died Sept. 5, 2005, from blunt trauma to the head while in a house at Apas Goudy.

Witnesses and others with information about assaults, disappearances and murders are often fearful for their own safety, and rightfully so. But Lila and other plead, on behalf of their loved ones, that those who see something, say something.

“Come out and tell the truth. When they see somebody being assaulted, rise up and take a stand. This isn’t right,” she said.

Lila has many good memories of her sister, who was a citizen of the Yakama Nation. Agnes was born in Toppenish on June 5, 1955, to William Whitefoot and Lillian Smartlowit. Their mother died at a young age, Lila said. Agnes and Lila were among 11 children raised by their maternal grandparents.

Agnes attended schools in Parker and Wiley City, according to a brief article in the Yakima Herald-Republic two days after her death. She received secretarial training and completed her general equivalency diploma through the Opportunities Industrialization Center program in Granger, the article said.

Indigenous children are often told to keep themselves safe and out of harm’s way. Girls, especially, are told to be careful — always be careful. Some people considered trustworthy can be anything but. A ride with the wrong person or so-called “friends” can be fatal.

Rosenda Sophia Strong, 31, disappeared Oct. 2, 2018, after she got a ride with an acquaintance to Legends Casino, just a few miles away from her sister’s home. Her remains were found in an abandoned freezer outside Toppenish on July 4, 2019.

“She was with people she was supposed to be able to trust,” said her cousin, Myrna Cloud, at a gathering in Toppenish on May 5, a day of awareness for missing and murdered Indigenous women and girls.

No one has been arrested in either case.

Levina Wilkins, auntie of Agnes and Daisy, also spoke of them during the March 25 gathering. A highly respected elder, Levina is fluent in Ichiskíin, the language spoken by the Yakama people in Washington, Oregon and Idaho. She and others teach and stress the importance of traditional ways in ensuring children take the right path in life.

“It’s hard to think of our children being abused, being beaten, getting lost,” she said. “Our belief tells us we’re here for a reason. The Creator put us here to love and respect each other.”

Native men and boys also disappear and are murdered at disproportionate rates. According to the Washington State Patrol’s latest list of 89 active cases of missing Indigenous people — which was published on May 17 — 21 are missing from Yakima County. Of them, 13 are men or boys.

“Domestic violence is really bad. I myself am a survivor of domestic violence. I am here myself as a result of prayers,” Lila said. “There have been at least three times I have almost lost my life. My aunt Emma Harvey prayed on my deathbed.”

Lila has also spoken publicly about being assaulted in her home by a rancher who lived in the area. When she was a young wife with a baby in the early 1970s, the man was preying on Native women who lived nearby. He knocked on the door one day and when she opened it, he punched her in the face and forced his way inside.

She pressed charges and the man served three years in prison, she said during an emotional meeting at the Yakima Convention Center in late October 2018. More than 200 people attended the gathering, during which Lila and others spoke of their own experiences along with sisters, mothers, daughters and cousins who have disappeared, been raped and murdered.

Nobody deserves to be brutalized, she said during another meeting on the crisis in late May 2019.

Lila will continue to speak out for justice and answers for the loved ones of missing and murdered Indigenous women. The work is not finished, she said.

“We’re binding together and taking a stand,” she said.

About the Protecting and Promoting Local Journalism Initiative

This story is part of the Protecting and Promoting Local Journalism Initiative, a project supported by the Yakima Valley Community Foundation with financial, training and technological assistance from Microsoft Corp. In Yakima County, the initiative is a collaboration between the Yakima Herald-Republic, El Sol de Yakima and Radio KDNA, whose journalists maintain independent editorial control of the project.