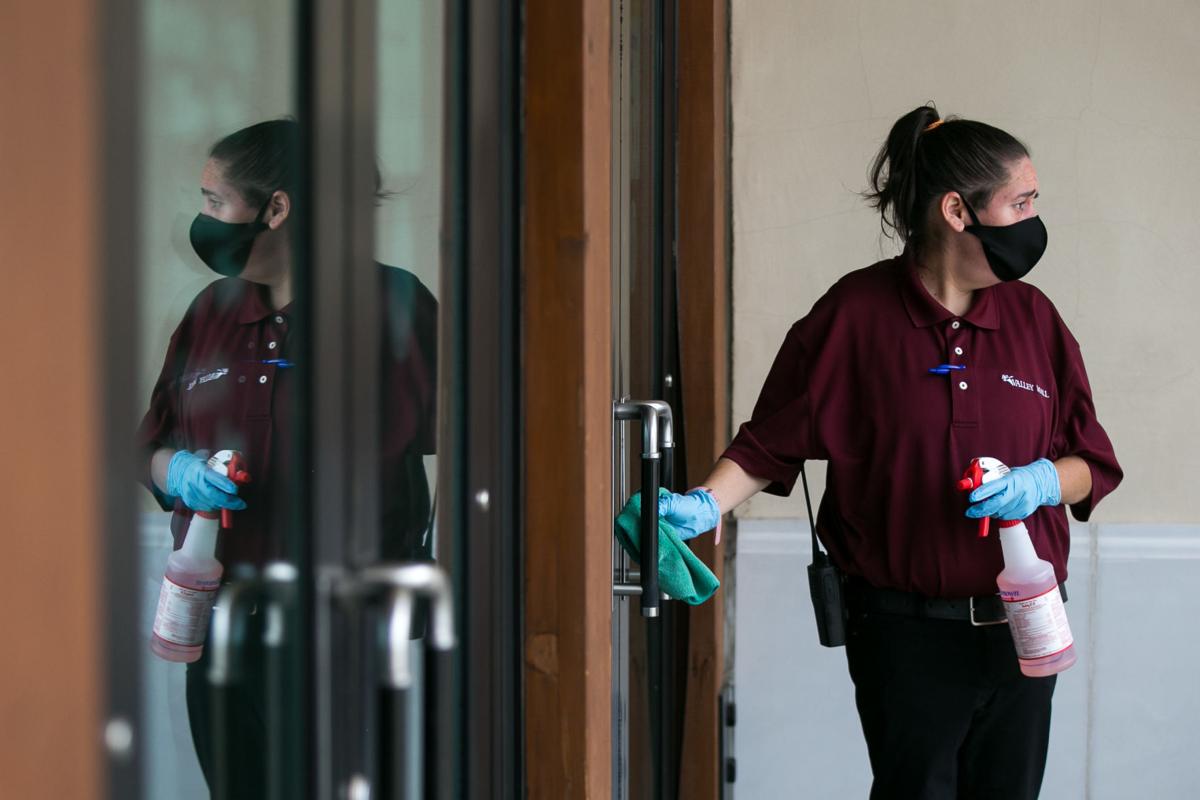 Jessica Holbrook, 33, a contracted janitor with Valley Mall, disinfects a doorway Friday, July 24, 2020, at Valley Mall, 2529 Main St. in Union Gap, Wash. Holbrook, who shared that she has a learning disability, has been working at the mall since October of last year. The Americans with Disabilities Act will be celebrating its 30th anniversary on Sunday. 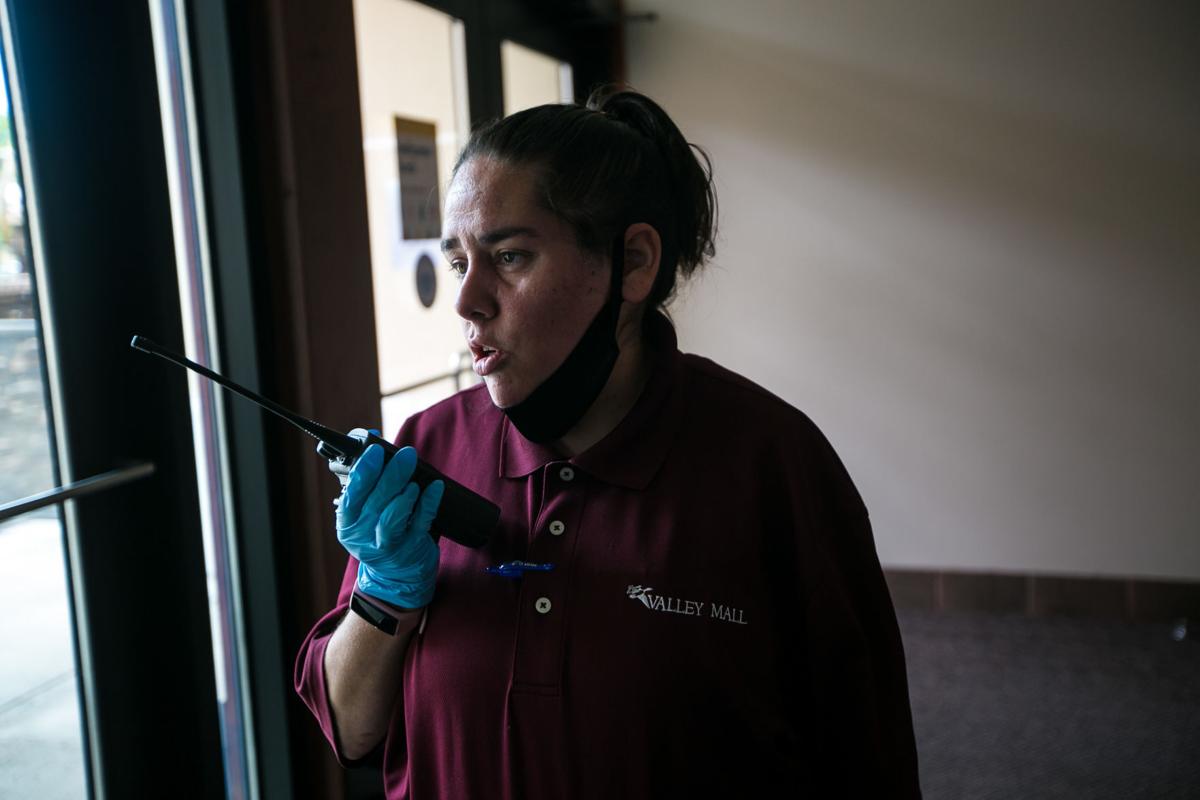 Jessica Holbrook, 33, a contracted janitor with Valley Mall, calls for her supervisor over a two-way radio Friday, July 24, 2020, at Valley Mall, 2529 Main St. in Union Gap, Wash. Her supervisor, Ed Aguirre, decided to take on the responsibility of hiring employees with disabilities. “They’re always willing to work and always here,” Aguirre said. “You’ve got to give them a chance.” 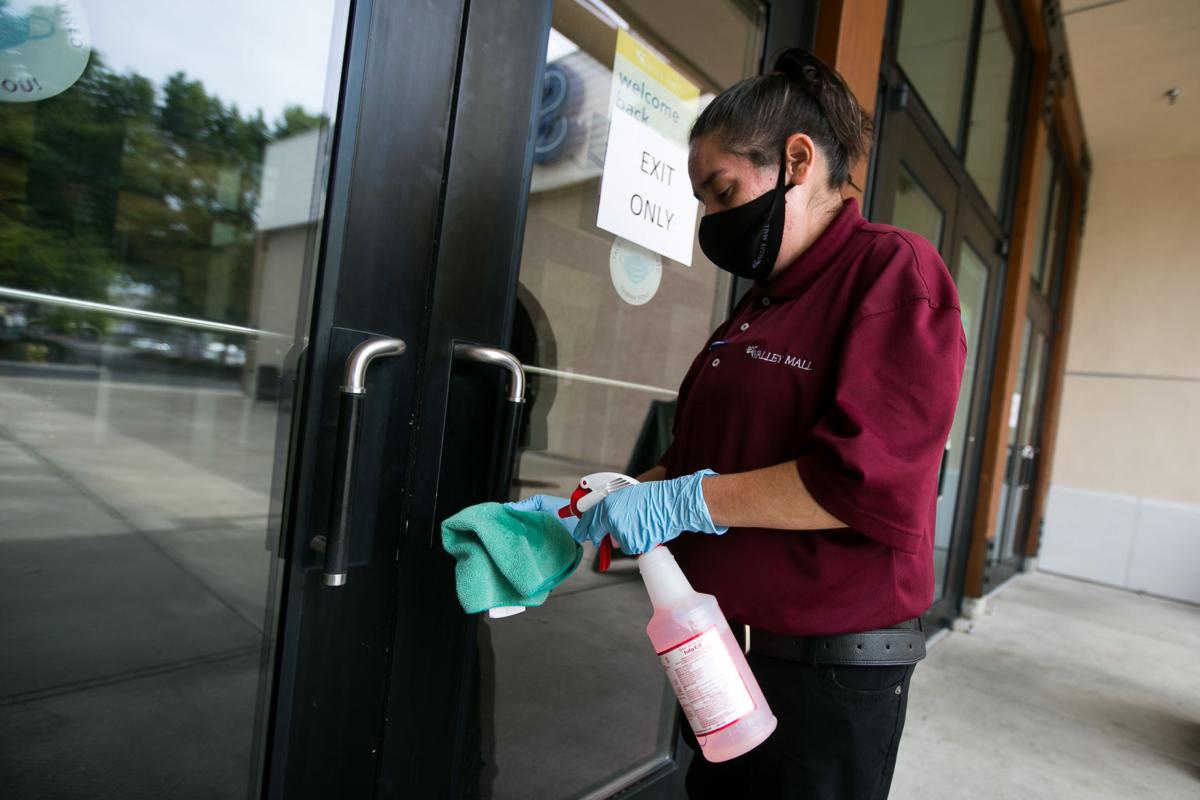 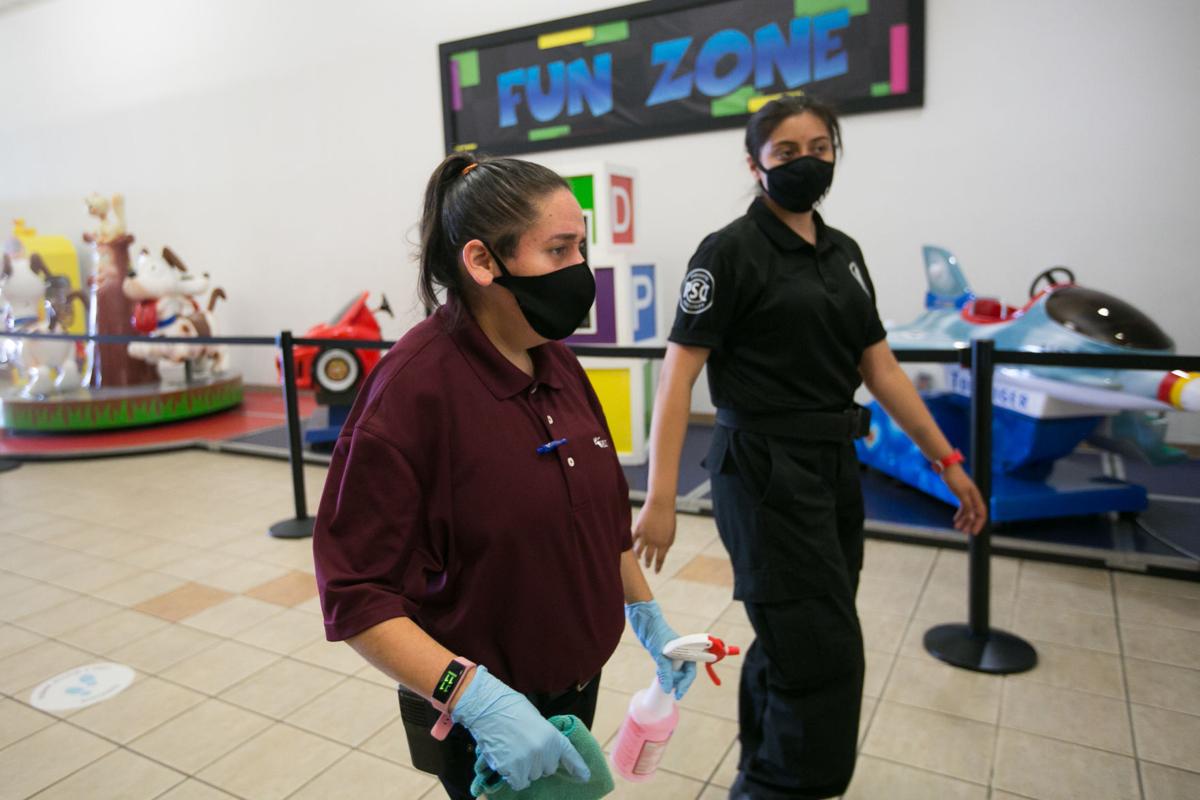 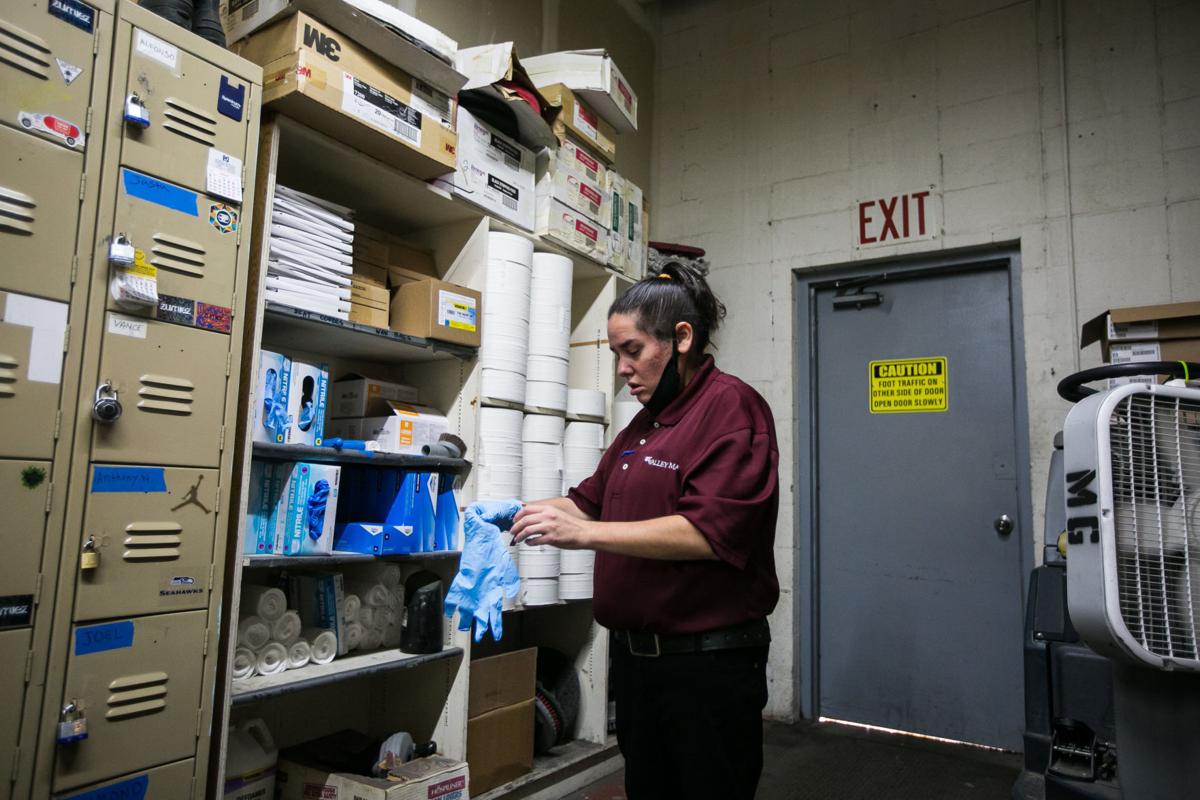 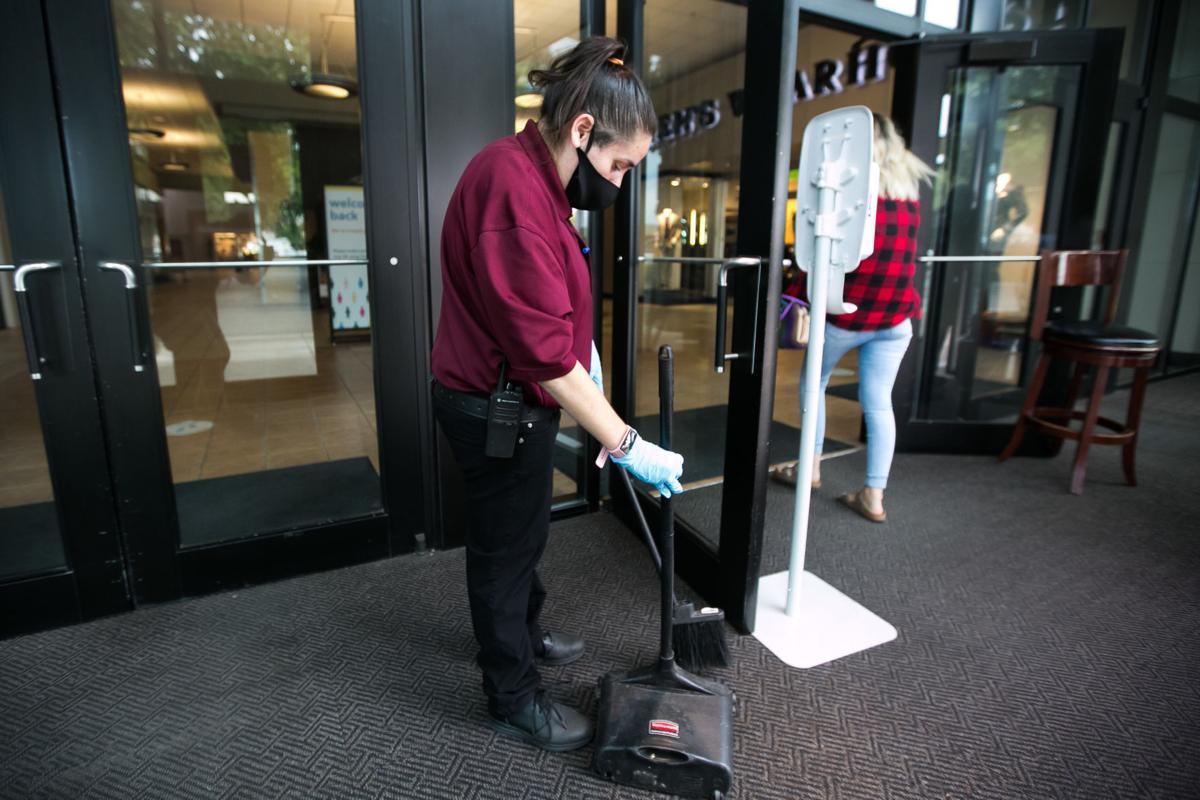 Jessica Holbrook, 33, a contracted janitor with Valley Mall, disinfects a doorway Friday, July 24, 2020, at Valley Mall, 2529 Main St. in Union Gap, Wash. Holbrook, who shared that she has a learning disability, has been working at the mall since October of last year. The Americans with Disabilities Act will be celebrating its 30th anniversary on Sunday.

Jessica Holbrook, 33, a contracted janitor with Valley Mall, calls for her supervisor over a two-way radio Friday, July 24, 2020, at Valley Mall, 2529 Main St. in Union Gap, Wash. Her supervisor, Ed Aguirre, decided to take on the responsibility of hiring employees with disabilities. “They’re always willing to work and always here,” Aguirre said. “You’ve got to give them a chance.”

She likes living alone, so she can do puzzles and watch movies on a whim — like the 1989 thriller “Road House,” featuring Patrick Swayze. Some of her favorite pastimes are swimming at the YMCA or playing games, including bingo, at the Harman Center in Yakima.

She also likes to help people and to prove her capabilities to others.

While working at a Yakima Safeway, she used to lead customers to products they couldn’t find or collect shopping carts in the parking lot to bring inside before her manager had even asked her to do so, she said. Knight, 58, recently retired after roughly 16 years on the job.

But these simple rights — to work, live alone or have access to public facilities — weren’t always available, since she has disabilities.

“I have (had) two brain tumors and the first brain tumor, they didn’t expect me to live,” she said, referring to one diagnosed when she was about 5. “The second brain tumor — I lived.”

Knight also survived a coma and skin cancer caused by the intensive cobalt treatment for her tumor. She is partially paralyzed from head to toe on the right side of her body, leaving her blind in one eye and making it challenging to walk. She also struggles with memory and gathering words.

Knight is among 61 million adults in the U.S. living with a range of disabilities, according to the Centers for Disease Control and Prevention.

Thirty years ago today, the Americans with Disabilities Act of 1990 was signed into law by then-President George H.W. Bush, creating the first comprehensive anti-discrimination legislation protecting individuals with disabilities. The law launched employment protections, architecture changes to make buildings accessible and the right to vote, among other things.

In the past 30 years, several steps have reinforced these rights and support for people like Knight. But as advocates celebrate these strides, they say there’s more to be done.

The timeline of protections

The battle for civil rights for those with disabilities traces back decades. But when the Civil Rights Act of 1964 was signed into law, it did not include protections for them.

The Rehabilitation Act of 1973’s Section 504 moved in that direction: Federally funded programs could no longer discriminate against individuals with disabilities — requiring programs like schools and publicly funded universities to make reasonable accommodations to enable people to fully participate.

Shortly after in 1975, what later was renamed as the Individuals with Disabilities Education Act, or IDEA, ensured equal access to education for students.

“Then in 1990, the ADA was all driven by people with disabilities,” said Kurt L. Johnson, director of the Center for Technology and Disability Studies at the University of Washington. It set up comprehensive protections against discrimination for those with disabilities. “‘Nothing about us without us’ was kind of the motto.”

The ADA applied to jobs, schools, transportation, voting and all public and private places that are open to the general public, requiring reasonable accommodations to allow access. Architecture changed as a result, for example: two-story public buildings had elevators instead of stairs or ramps to enter building fronts. Employers were expected to make reasonable accommodations for employees.

Separate federal and state laws and programs ranging from Social Security and Medicaid to housing laws financially support these efforts.

“When (ADA) passed, there was a lot of excitement that was immediately met with the reality of, ‘it takes time for these things to take hold, to educate and get the community supportive of the idea,” said Gaulke. “So it took about a decade … before it shifted from being ‘Oh my gosh, ADA is the worst thing in the world’ to ‘It isn’t so bad. This is something we should probably be doing.’ And now I’d say it’s an afterthought to employers’ minds.”

He said today, employers are much more likely to look at an individual’s ability than disability.

Today, Washington boasts one of the most progressive employment programs for people with disabilities. More than 86% of people with developmental disabilities who participate in employment services through the Department of Social and Health Services work in an integrated setting — more than four times the average nationwide, according to the department.

These individuals are placed in jobs of all levels, Gaulke said. In Yakima, a recent placement was as a pharmacist, he said. Accommodations are rarely seen as a big burden by employers now.

Knight, for example, was allowed to push a cart around Safeway to support her as she did her work, according to her sister and guardian Julie Richardson.

Employees also are entitled to job coaches. For Jessica Holbrook, a 33-year-old from Gleed with a learning disability, this support allowed her to get directions on how to be a better employee and grow her confidence so she could work independently.

“I’m the type of person (who goes) into a new place and I’m really shy and I don’t know the work and what the boss wants out of me,” she said. “So with the job coach, it helped me come out of my shell.”

After about five months with a job coach visiting her work regularly, Holbrook graduated from the program and now works as a janitor at Valley Mall in Union Gap without oversight or support, aside from general management by her boss Ed Aguirre. She feels confident in her own abilities, she said. Aguirre does, too. Holbrook is one of six employees of his with disabilities out of a group of 14.

Gidget Cook, a job coach with local organization Entrust Community Services, which supports individuals with disabilities with education, employment and health care, said some of this guidance or accommodation is very simple. In one instance, she created a visual checklist of tasks for an employee to complete, rather than a written list, since the worker’s disability left her unable to read.

Johnson of the UW said roughly half of employer accommodations cost nothing — they’re just adjustments in approach.

Bumps in the road and progress

While accommodations in areas like employment have come a long way, there were some setbacks to the ADA in the past 30 years. A series of Supreme Court decisions in the years following the 1990 act left the ADA “gutted,” Johnson said. It was determined that if a disability could be corrected, it wasn’t covered, for example.

“So there was a big move to revise the ADA to make it clear to the (Supreme Court) what the congressional intent was,” for all disabilities to be recognized, he said.

There were other steps that helped better support individuals with disabilities, too.

A Supreme Court’s decision in a 1999 case known as Olmstead v. L.C. found it discriminatory to segregate individuals with disabilities. The step led to less institutionalization of people with disabilities, although four institutions remain in Washington today.

In 2004, the IDEA was renamed and reauthorized. It expanded to include transitional services in K-12 for students with disabilities to start a job or post-secondary program.

More to be done looking forward

There’s more to be done to eliminate barriers and better support individuals with disabilities.

Mike Raymond, the president of People First of Washington, an advocacy group that pushed for and helped normalize the inclusion of individuals with disabilities in the workforce, said his primary goal is to see the remaining residential institutions in Washington close. He was one of thousands of people to be institutionalized, and experienced that for 20 years before being released. He went on to marry and have children.

“I would like to see the institutions close,” he said, bar none.

Richardson, Knight’s sister and guardian, said she would like to see the requirements for receiving special education support in K-12 be loosened. A requirement of an IQ below 70, for example, should not be hard and fast, she said.

More federal funding should be poured into high-quality special education in K-12, as well as community and state programs that carry up into adulthood like the state DSHS’s Developmental Disabilities Administration, said Dana Floyd, director of special services for Educational Service District 105, an agency that supports school districts in the region.

Gaulke echoed her, zeroing in on incentive programs for employers to continue hiring on and accommodating individuals with disabilities. He said as these individuals are gainfully employed, their use of Social Security drops — making it a positive move for both the employer benefiting from their work and for the economy as a whole.

But Johnson said the thresholds to receive financial support through programs like Social Security, Medicaid or housing programs need to change altogether.

“The main thing I would do is to revise the way we provide subsidies and supports to people so people don’t have to be poor to receive support,” he said.

It’s easy to surpass the level of income allotted to qualify for support, removing access to resources that individuals can’t afford independently, he said.

Several board members of People First of Washington said they have struggled with this balancing act personally.

Johnson said a variety of programs would have to be adjusted to solve the problem, since they’re independent of ADA — but that doesn’t mean it would be hard.