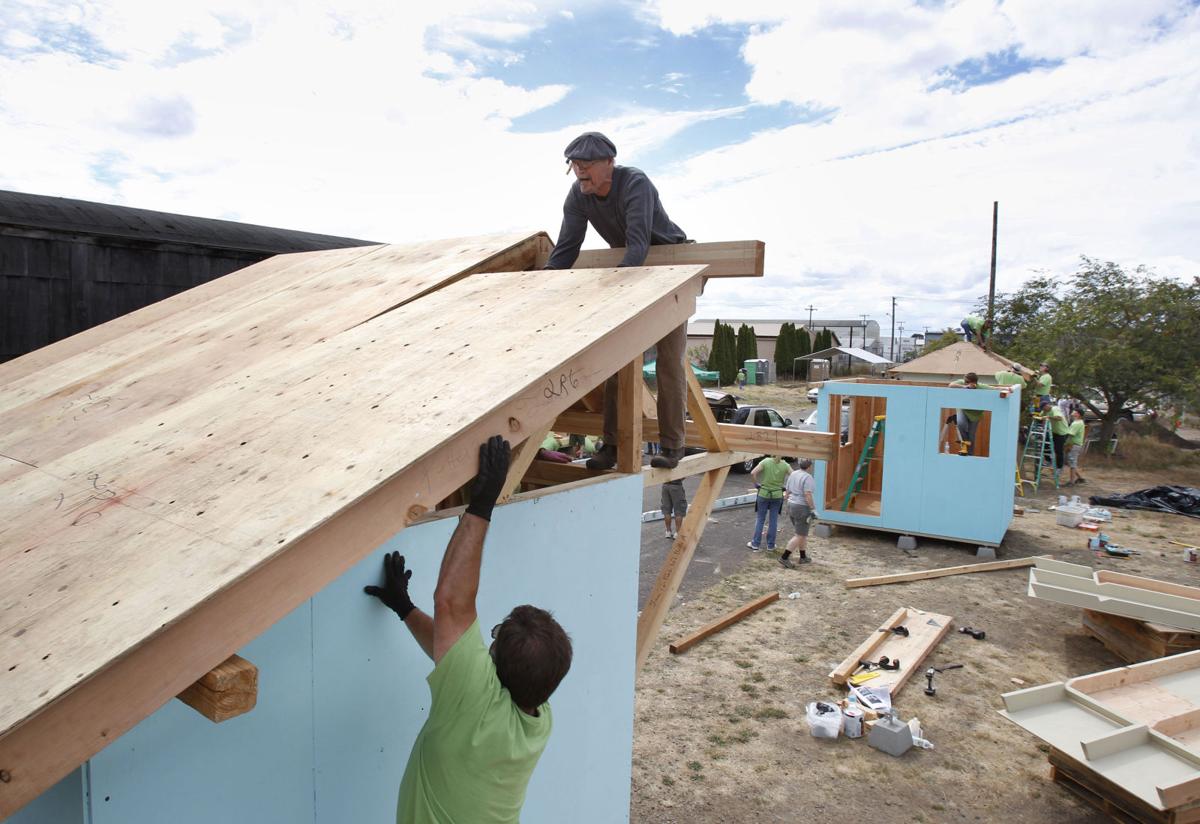 Tim Cramblit (left) and Alex Fontain (on the roof right) join over 60 other volunteers at a work party on the Opportunity Village site to erect structures for the first group that will move in the housing site in Eugene, Ore. on Saturday, August 24, 2013. (Chris Pietsch/The Register-Guard) 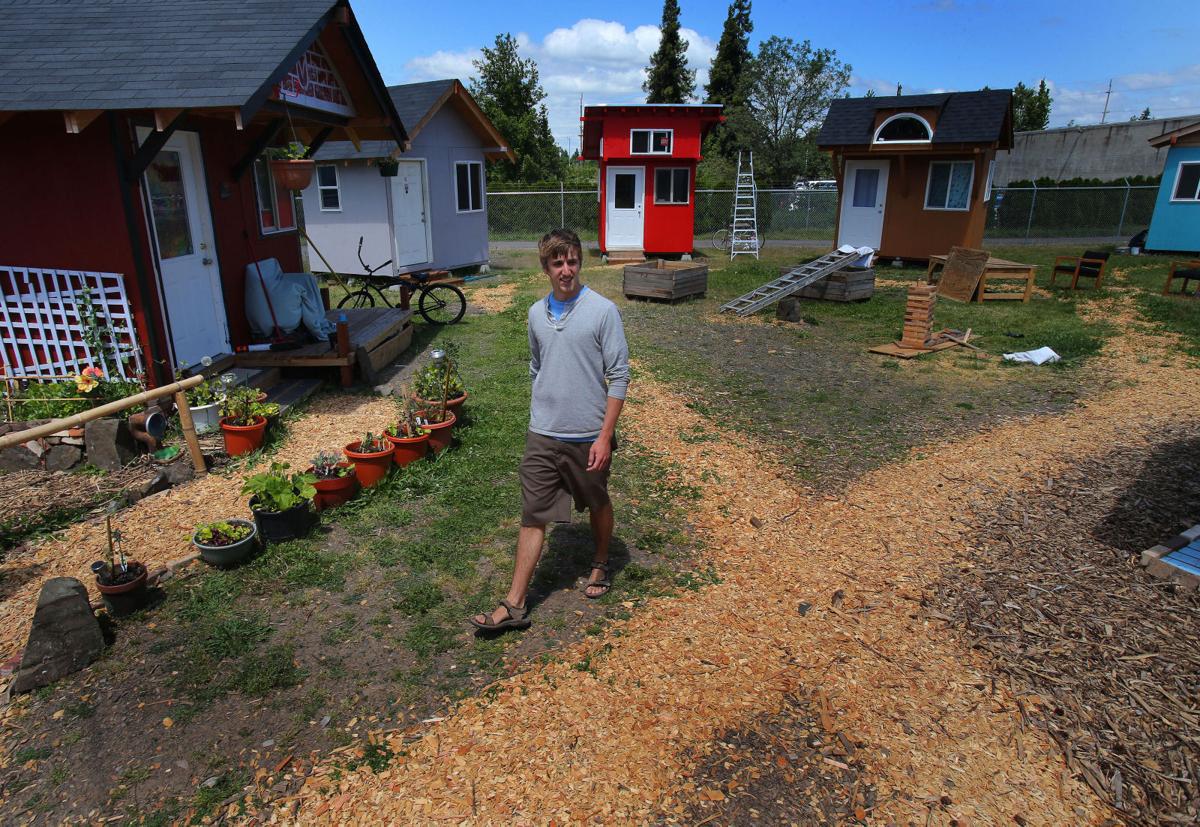 Tim Cramblit (left) and Alex Fontain (on the roof right) join over 60 other volunteers at a work party on the Opportunity Village site to erect structures for the first group that will move in the housing site in Eugene, Ore. on Saturday, August 24, 2013. (Chris Pietsch/The Register-Guard)

The vision is clear: A village of 30 tiny houses, each measuring about 120 square feet, that would provide an alternative for the chronic homeless who camp along the Yakima River and in parking lots in downtown Yakima.

Situated on an acre, maybe two, the village would have a building equipped with common kitchen and bathroom facilities. The people living there would govern it, and drugs and alcohol wouldn’t be allowed.

“Part of our goal is to have people get established, get a job, get their lives together and move on to better places to live,” said David Helseth, chairman of Yakima Association of Churches and Faith Communities, a local committee seeking housing for the homeless. “That’s the first step in helping them get their lives together.”

Like many communities nationwide, Yakima has long struggled with a homeless population without any permanent solutions. Temporary shelters are open during the winter, but the homeless are ushered back into the streets when the shelters close in the spring.

Now a group of advocates for the homeless, which includes several local churches, county and city officials and service providers, is getting behind a push to erect a village of small, inexpensive houses to begin getting the homeless off the streets.

On Thursday, the executive director of SquareOne Villages — the organization that established Opportunity Village — will visit Yakima to tell of his experience in helping erect the homeless village in Eugene.

Temporary winter shelters help anywhere from 300 to 400 people a night in Eugene, and there are more than 60 sites in the city where people can legally sleep in vehicles.

“All those things weren’t meeting the need, so we started working on these tiny little structures,” Bryant said.

Churches banded together and formed partnerships with service providers, city leaders and community members to establish a village of tiny homes — 29 of them, measuring 8 by 8 feet. They aren’t heated, but they are insulated. There are no utilities. There’s a common building with electricity, heat and kitchen and bathroom facilities.

The project cost about $200,000. About half was paid through donated labor, lumber and other construction materials.

Helseth said his group would like to build a village of 30 tiny homes that would be heated because winters are colder here than in Eugene. There also would be a building with common kitchen and bathroom facilities.

The proposed project is early in the planning stages, and cost and a potential site have yet to be determined, he said, adding that informing the community at this time is important and could garner additional support.

Winning over the skeptics

At first, the project in Eugene wasn’t widely embraced by the community, and its initial site was rejected by neighbors because it was close to a school. Then the city agreed to lease some of its property at its public works facility, recalled Mike Kinnison, manager of Eugene’s Office of Human Rights & Neighborhood Involvement.

“One of the challenges was we had never done or seen anything like this in Eugene,” he said. “Part of it was ‘Can we even do this? Do we have what we need in our code?’ ”

The village was allowed as a shelter under a conditional-use permit that the eight-member City Council approved by a 6-2 vote.

There were fears about what such a village might attract and how it would impact the quality of life in the surrounding area, Kinnison said.

The village is bordered on three sides by the public works department, a storage facility and a police lab. Across the street is an affordable housing project owned by a nonprofit, with smaller houses farther down the street.

“There was anxiety surrounding that, but Dan (Bryant) was good about addressing it,” he said. “Over time, I think people have realized that it was no big deal, just people living in a neighborhood.”

Yakima has had similar concerns. A homeless shelter and service center being proposed at a downtown market was blocked by the City Council after zoning issues were raised.

Service provider Yakima Neighborhood Health purchased the old market and is now suing the city in an attempt to continue its plans to transform it into a homeless shelter and service center.

Neighborhood Health officials say its efforts would be complemented by a homeless village in Yakima similar to Eugene’s.

“I’m a hundred percent behind anything that’s gong to reduce these (homeless) numbers,” said Neighborhood Health CEO Anita Monoian. “If we get our shelter and service center up tomorrow, there’s still going to be a need. Ours will be a resource center for homeless people. (The village) would be temporary housing. If we could make both happen simultaneously, that would be the best of both worlds.”

“They are working with the city of Yakima,” she said. “We just need more information on what it would look like.”

The Eugene village is a gated community, and residents are required to take turns pulling gate duty.

“There’s someone there at the gate 24-7,” Bryant said, explaining that the village is governed by its residents. “We set up the rules and procedures and they run it.”

Residents are required to establish a transitional plan out of the village and to volunteer in the community. For example, residents provide the maintenance to keep open restrooms at a nearby city park. Facing a financial crunch, the city had cut the park’s bathroom maintenance from its operating budget.

“These folks want to be good neighbors, they really do,” he said. “If given a chance, they can actually do things to help improve the neighborhood.”

After a year of operating without problems, the village was reauthorized unanimously by the council.

“So we even changed the perspective of the two council members who voted against it,” Bryant said.

Since opening in August 2013, the village has seen 90 chronic homeless people move on to permanent homes, he said.

Homeless people in Yakima would embrace similar opportunities, said Dustin, a 28-year-old homeless man who declined to provide his last name. He said homeless people want to get back on their feet and be productive.

“No one likes to be shut out of society,” he said, standing outside Yakima Neighborhood Health one recent afternoon. “In turn, they’re going to have positive things come back to them.”

■ What: Dan Bryant of SquareOne Villages and Opportunity Village in Eugene, Ore., will share how their homeless micro-housing model works.

YAKIMA, Wash. — A group seeking to build a village of tiny houses for the  chronically homeless is asking  the public for help in raising the …