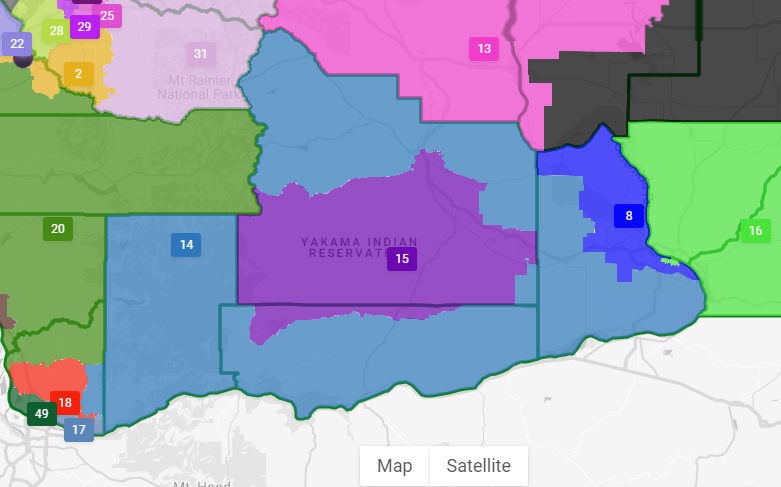 This closeup of Map 1 among the Washington Redistricting Commission's candidates for new districts shows a configuration that carves out a district for the Yakama Nation. 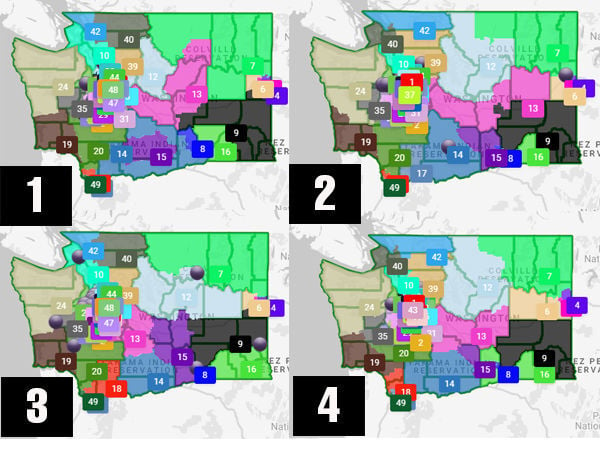 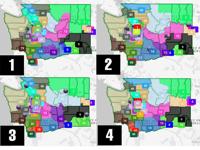 Votes from members of the Yakama Nation may not be divided by legislative boundaries in future elections, according to draft maps released Tuesday by the Washington State Redistricting Commission.

The Yakama Reservation was united in all four draft maps released by the commission. The reservation is currently split between districts 14 and 15.

The city of Yakima remains divided in the draft maps.

The maps explore possible new boundaries for legislative districts across Washington using data from the 2020 Census. Districts must be redrawn every 10 years to reflect changes in the population.

This was the first year the redistricting commission followed a tribal consultation policy, nonvoting commission chair Sarah Augustine said in an interview. The commission met with designated leaders from numerous tribes to receive input prior to drawing the maps, she said.

The process is ongoing, she said, meaning the commission will keep in contact with tribal leaders as they review the draft maps.

In their statements made on the website, the commissioners each said their maps reflect feedback shared during tribal consultations. Yakama Nation leaders wanted the reservation to be unified in one district.

The reservation lands may end up united, but the city of Yakima remained divided in each of the draft maps.

Sims’ map combines eastern Yakima, Terrace Heights and the Yakama Reservation to make one majority Hispanic district, District 15. The West Valley is in District 14, which encircles District 15 and also includes Naches, Prosser and Klickitat. The divide sits at about 25th Avenue in Yakima.

Graves’ map splits Yakima near Front Street. The western part is combined with the Yakama Nation and most of Yakima and Klickitat counties to make up District 14. The eastern part is in District 15 with Benton County.

Fain’s map combines West Valley with the Yakima Reservation to make District 14, which also includes parts of Klickitat, Skamania and Clark counties. The divide is not straight across, and District 14 about reaches 16th Avenue in one area. The eastern part of Yakima and Yakima County make up District 15.

Walla Walla, which currently sits in District 16, was divided in one of the four draft maps. Sims’ map divided Walla Walla between District 16 to the west and District 9 to the east.

New districts must be made as equal in population as possible, and are not supposed to reflect partisan advantage, discriminate against any group, or split cities and other political subdivisions, according to the commission’s website. The new legislative districts must near a target population of 157,000 people per district.

Augustine said the commission is supposed to keep divisions of municipalities and counties to a minimum. She said they recognize that sometimes divisions must happen.

Walkinshaw, who divided the Yakima area into three districts, said in his online statement that the divisions in his map were made along neighborhood or school district boundaries or large transportation corridors.

The maps are not finalized until mid-November. The public can comment directly on the map files on the website. People also can comment on the maps by phone, email, audio file or video message.

Members of the public can also submit their own maps using the online mapping tool.

Three of the four commissioners must agree on a single legislative map and a single congressional map by midnight Nov. 15. The Legislature will then have 30 days to make any amendments to the two final maps.

Yakima County residents can review several maps under deliberation by the Washington State Redistricting Commission at two sessions this week.