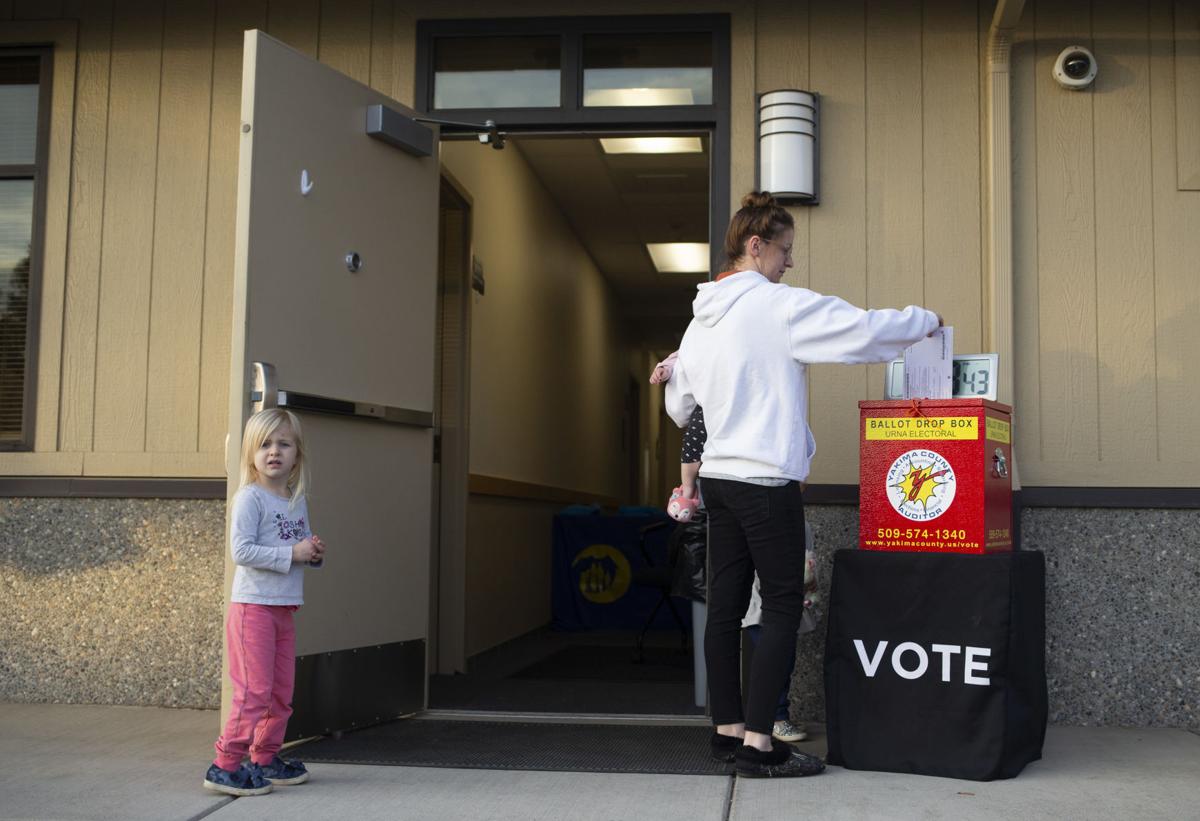 Ashley Simpson drops off a ballot on Tuesday, Nov. 3, 2020, at the Yakima Neighborhood Health Services satellite office in Sunnyside, Wash. 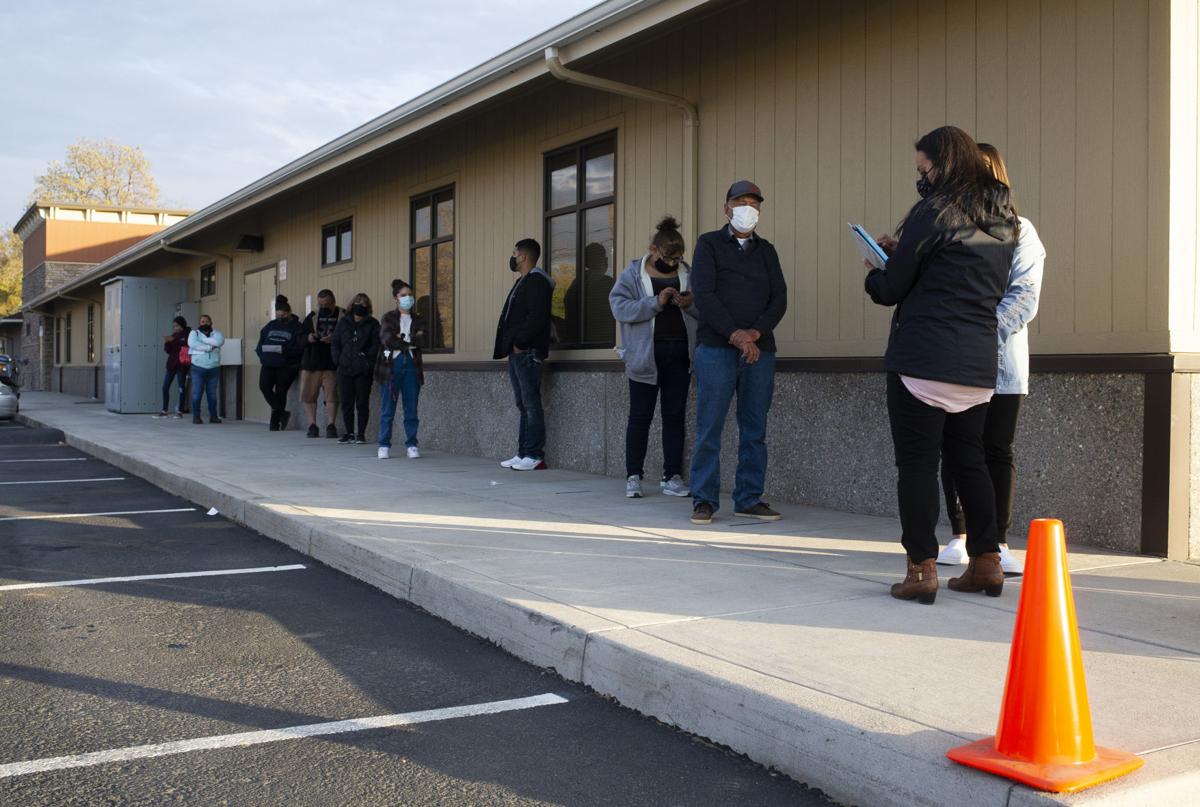 People wait in line to register to vote or to get a new ballot Tuesday, Nov. 3, 2020, at the Yakima Neighborhood Health Services satellite office in Sunnyside, Wash. 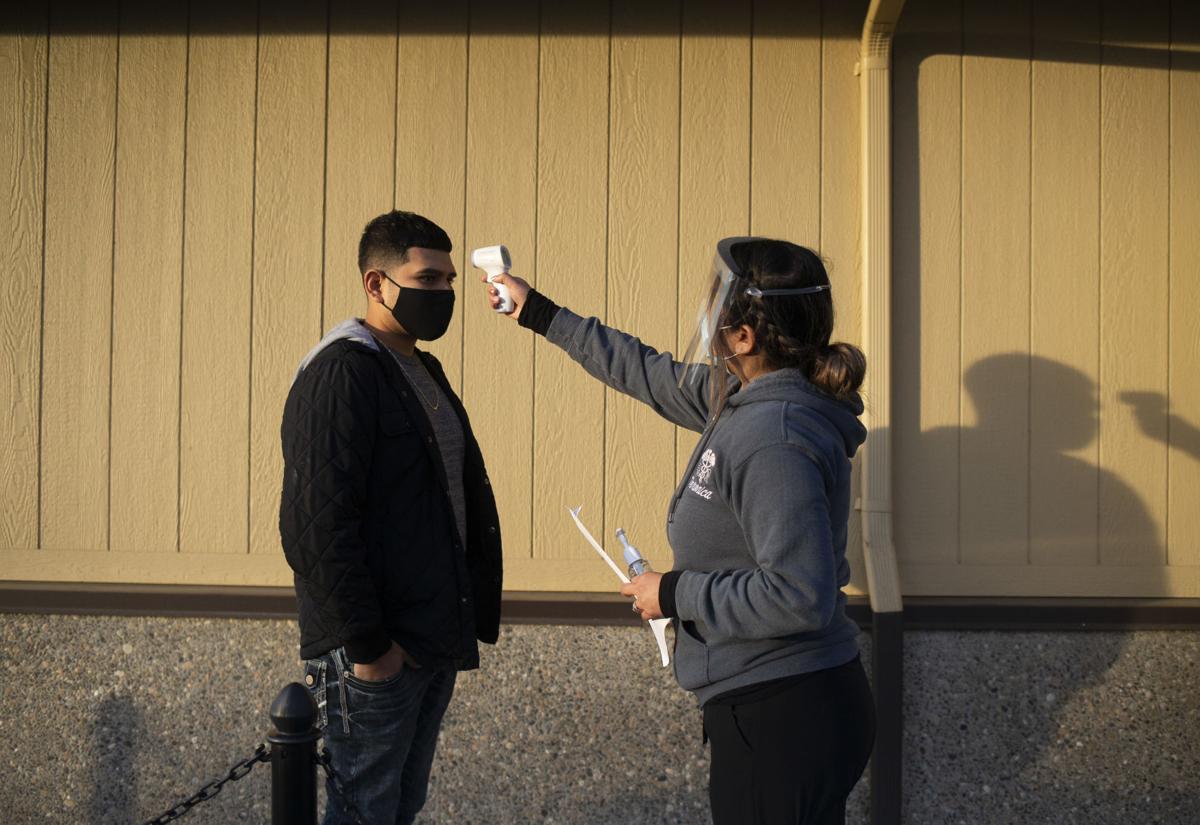 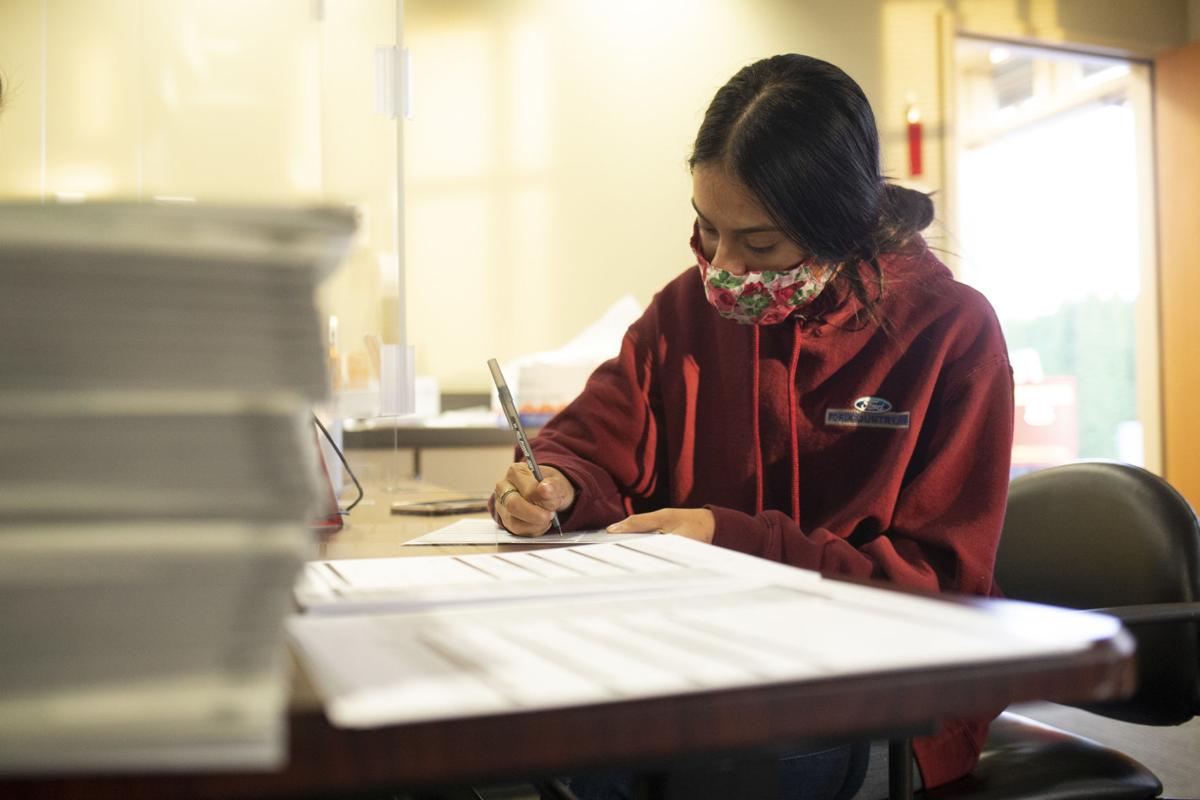 Yadira Serrano registers to vote Tuesday, Nov. 3, 2020, at the Yakima Neighborhood Health Services satellite office in Sunnyside, Wash. The site had about 50 new voter registrations on Election Day as of 4 p.m. 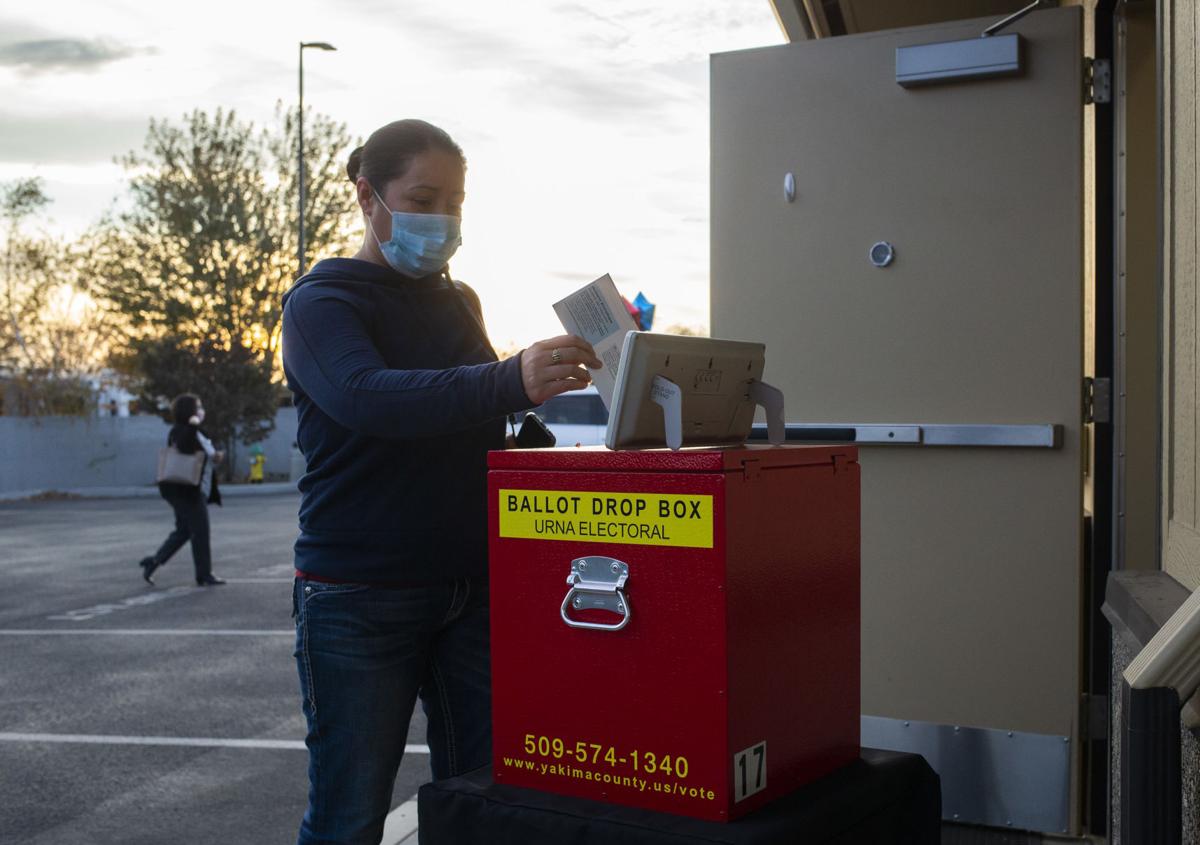 Sandra Sandoval drops off a ballot on Tuesday, Nov. 3, 2020, at the Yakima Neighborhood Health Services satellite office in Sunnyside, Wash. 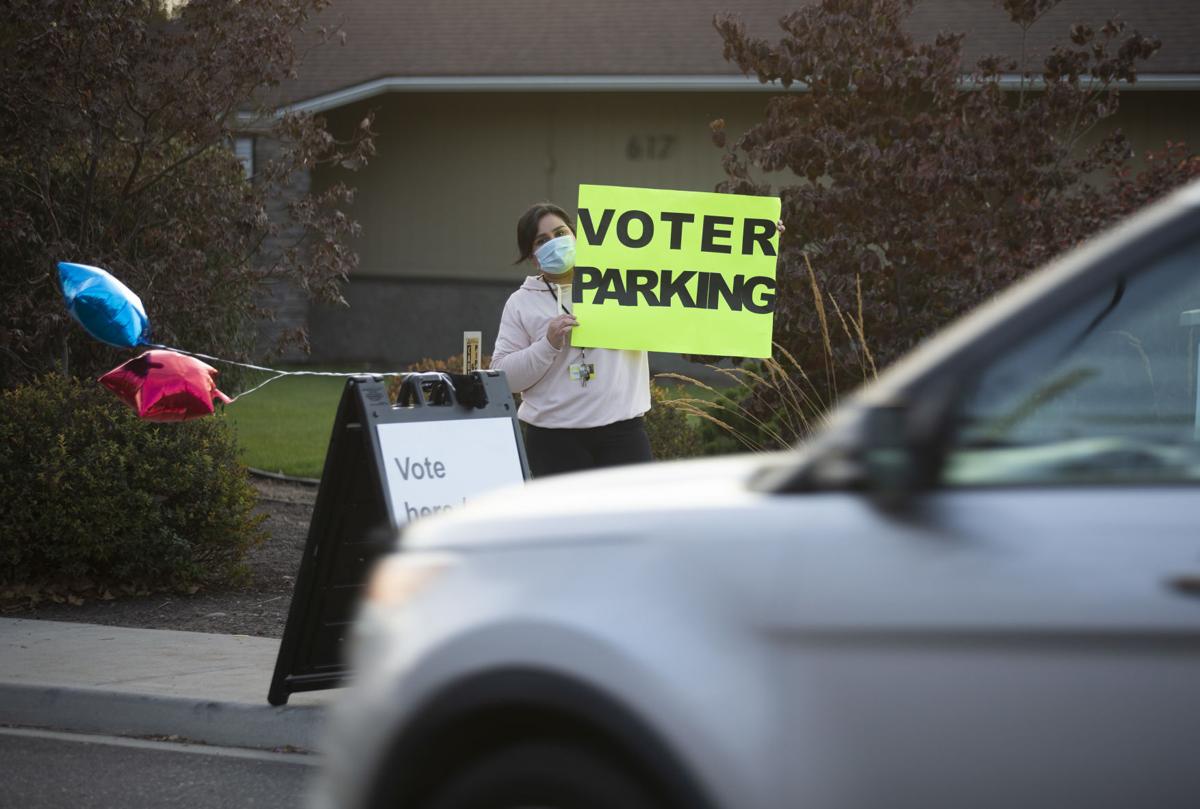 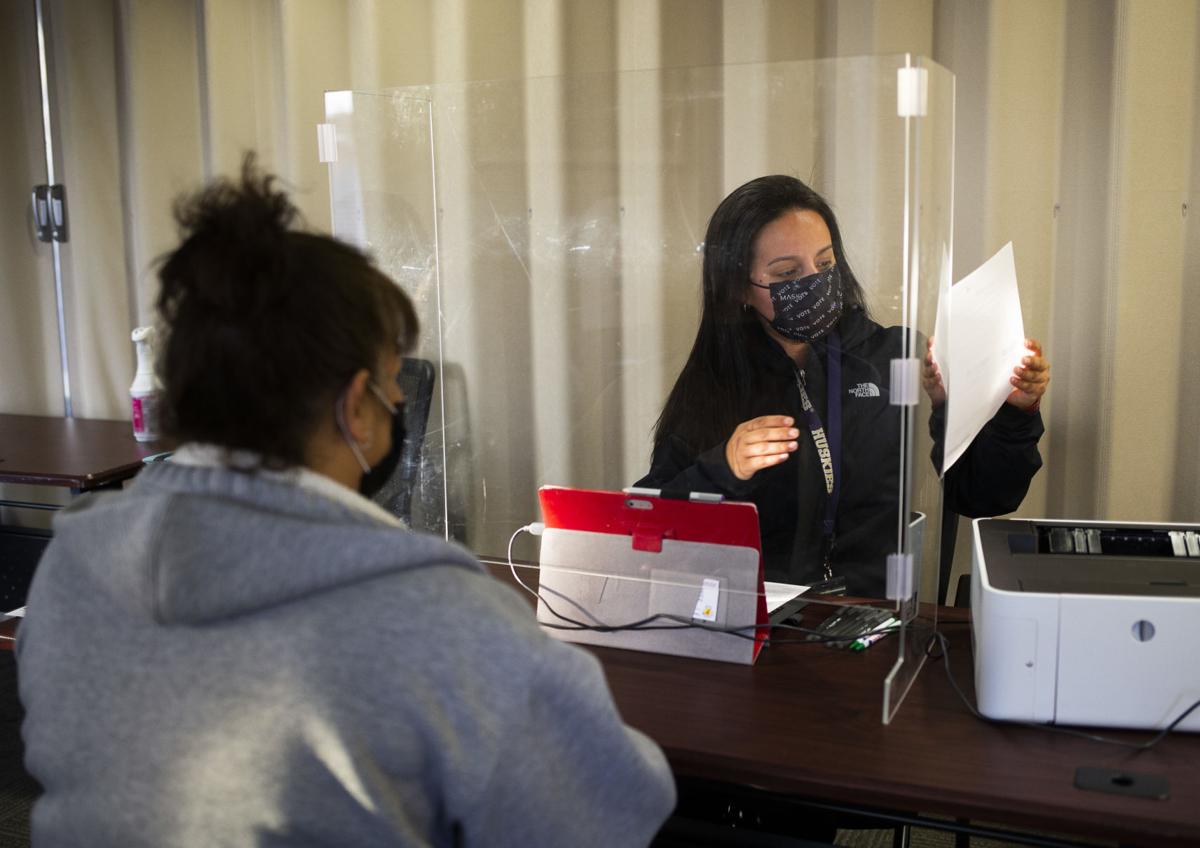 Ashley Simpson drops off a ballot on Tuesday, Nov. 3, 2020, at the Yakima Neighborhood Health Services satellite office in Sunnyside, Wash.

People wait in line to register to vote or to get a new ballot Tuesday, Nov. 3, 2020, at the Yakima Neighborhood Health Services satellite office in Sunnyside, Wash.

Yadira Serrano registers to vote Tuesday, Nov. 3, 2020, at the Yakima Neighborhood Health Services satellite office in Sunnyside, Wash. The site had about 50 new voter registrations on Election Day as of 4 p.m.

Sandra Sandoval drops off a ballot on Tuesday, Nov. 3, 2020, at the Yakima Neighborhood Health Services satellite office in Sunnyside, Wash.

When the Yakima County Auditor’s Office opened its doors at 8 a.m. Tuesday to begin assisting voters on Election Day, there was a queue of about 20 people.

That line grew throughout the day, with upward of 50 people waiting at any given time in the early afternoon. By evening, the line was even longer.

Community members were there to get replacement ballots, register to vote or hand-deliver their ballot to an official drop box, said Yakima County Auditor Charles Ross. The office had 10 stations where voters could fill out their ballots.

Ross said the downtown office, which had four customer service desks open, likely supported 900 or more people on Election Day. That’s in addition to the Sunnyside satellite election office, which also was helping voters, he said.

Wait times throughout the day were about 35-45 minutes at the downtown office.

“Everybody is being real patient,” he said. “They realize that they’re here on Election Day. Most people have had their ballot for almost three weeks, so they understand that they’re here to get a replacement ballot or register in person.”

Ross said the day had been smooth. He said election officials had requested that some individuals remove items of clothing that supported campaigns, since law prohibits campaigning near election drop boxes. But they had “all been relatively understanding,” he said.

A steady stream of voters formed a socially distanced line at the election satellite office on the north side of Neighborhood Health in Sunnyside. A bilingual health screener slowly let in those who were registering to vote or filling out a new ballot on the building’s south side while others dropped off their ballots in the drop box outside. Yolanda Arellano said about 50 voters had registered on Tuesday as of about 4 p.m. and she expected about 25 more in Sunnyside.

Earlier in the day, Ross had helped collect ballots from official drop boxes in Sunnyside, Toppenish and Zillah. He said officials had requested that the Zillah box be emptied because it was full, and that the Sunnyside box was also “hugely full.”

Downstairs at the courthouse, Ross said, about five election officials were busy processing ballots, which would continue through 8 p.m. when the preliminary results of the election are released, he said. About half a dozen community members had been there throughout the day to monitor the process through a window, said Ross.

Stephan Edwards, 73, was one of them. This was the first election Edwards had volunteered to monitor for the Yakima County Republicans, he said. He offered his time because he was previously unfamiliar with how the election office process works — from verifying ballot envelope signatures to anonymizing ballots, running them through a computer and inputting any write-ins.

After a few hours of watching, Edwards said he supported the way that the elections office handled ballot counting, and was impressed by the workers who dedicated their time to the democratic process.

“It’s a tough job,” he said. “I couldn’t sit there at the computer and click that mouse all day. I commend these people for doing that.”

Yakima County residents were determined to make their vote count.

Luis Moreno, 62, said he and his siblings hold each other accountable to vote in each election, even if they don’t agree on candidates, he said. He hand-delivered his ballot to the courthouse Tuesday “with pleasure,” he said.

But for many voters, this election stood out — and made them determined to participate.

Shawn, a U.S. Army veteran who gave only his first name, hadn’t voted in an election since he exited the military in 2003. His partner had never voted. Both of them had PTSD, he said, making large crowds a challenge. But the two of them were set on voting Donald Trump back into the White House, he said. So they made their way down to the courthouse to vote. They were able to use the county’s accessible voting station — in a quiet room where monitors sit — because of their PTSD.

Twenty-two-year-old Robert Gonzalez was inspired by his family members to vote this year for the first time. In the 2016 election, he had turned 18 just in time to participate, but wasn’t motivated to at the time. This year, he said he felt like he had to do something. His ballot never arrived in the mail, so Gonzalez headed to the courthouse after work and got a replacement ballot. It was an easy process, and he soon had submitted his ballot without a hitch, he said.

“It feels good to have a say,” he said of voting.

Myra Lott, 61, also had considered herself apolitical prior to this election. Now, she sees voting as her civic duty, she said.

“I used to not vote,” she said. “But this year has been unbelievable. I’ve been really into watching the news and listening to what politicians have to say, and I’ve been invested more now. It’s not just because of the Black Lives Matter thing and all that. It’s just everything, from the COVID virus to what’s going on across the nation.”

Lott works closely with those experiencing homelessness in Yakima, having been in that position herself in the past. She said from conversations with these community members, she came to realize the importance of voting for politicians invested in helping the community — including the disenfranchised.

“So many people don’t do anything. I used to be one of them. I just kept thinking, ‘Oh well, it’s not going to matter. My two cents won’t count. Well, if you don’t put two cents in, it won’t ever count,” she said of voting. “My influence matters, and so does yours, and so does theirs. No matter if you’re a Republican or Democrat. The fact that you’re participating (is what counts) — because not everybody has this right.”

After a wait of about 45 minutes at the courthouse, Lott received a replacement ballot and cast her vote.

“This is a wonderful, historic moment,” she said. “I’m part of the club.”

Staff at the downtown post office directed several community members throughout the day to the courthouse to vote or submit their ballots to drop boxes. Just a handful of people hand-delivered their ballots to their office to be postmarked by Election Day, they said.

Marisela Labra, 22, was among them.

Labra said she waited until the last minute to submit her ballot — just before 4 p.m. on Election Day (drop boxes closed at 8 p.m., and mailed ballots needed to be postmarked on Tuesday). The courthouse was full of people, so she decided instead to take her ballot to the post office, determined to make her vote count.

Labra voted for Joe Biden because he has expressed a desire to help all people throughout the U.S. She said racist comments against Mexicans and people of color by President Trump, on the other hand, were personal, since her parents are Hispanic.

Labra said she felt a sense of relief after submitting her ballot.

“Every vote counts,” she said.

Down to the deadline

Community members took advantage of the final moments to register to vote and submit a ballot.

Andrew Krueger, 19, was among them. Arriving at the downtown courthouse just after 7:30 p.m., he became a registered voter in his first election, and submitted his ballot with time to spare.

“This is a historical time to vote, so there was no better time to exercise my right to vote,” he said, adding that the outcome of the election would impact lives.

Outside the courthouse on East Martin Luther King J.r Boulevard, election officials were also watching the clock, ready to close the official ballot box posted there. Within the last two minutes before 8 p.m., four people pulled up in their cars and dropped their ballots, including one at 8 o’clock — to the second.

Voter turnout at 70% in Yakima County so far, with more ballots coming in

At least 88,867 ballots have been returned to the Yakima County elections office, with more boxes of ballots yet to be opened.