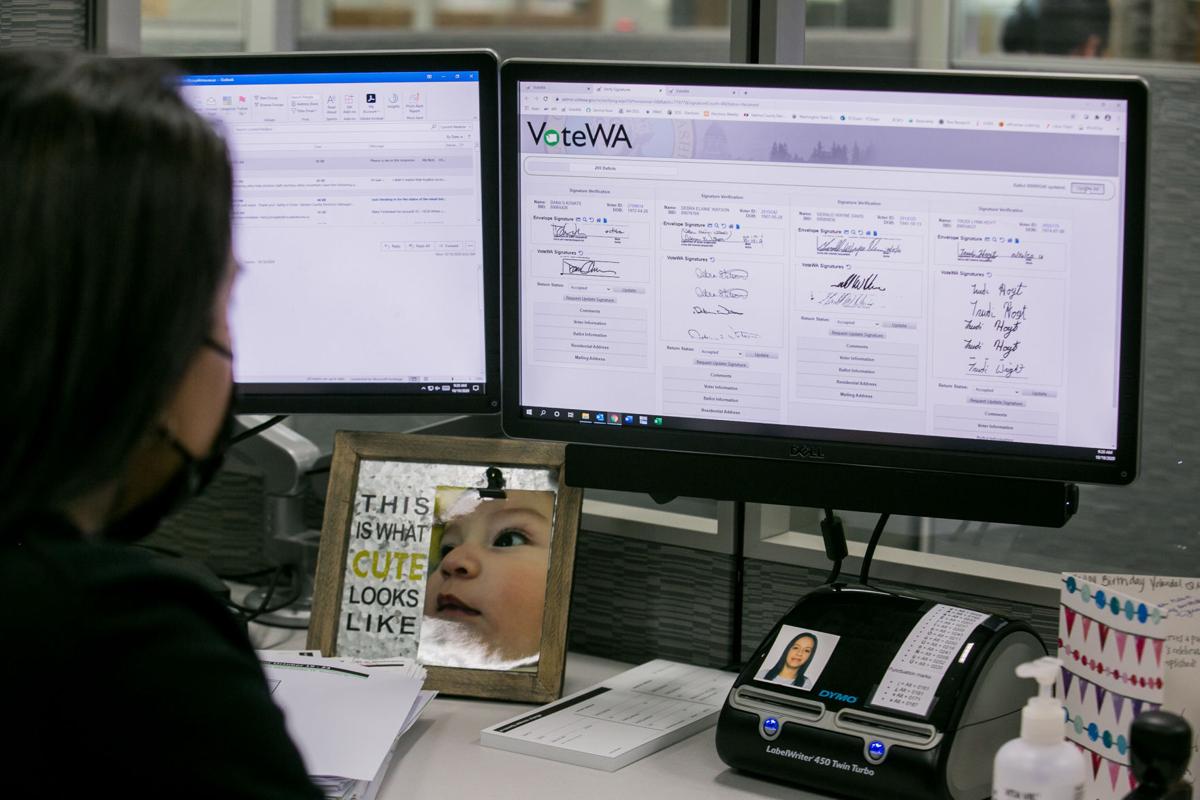 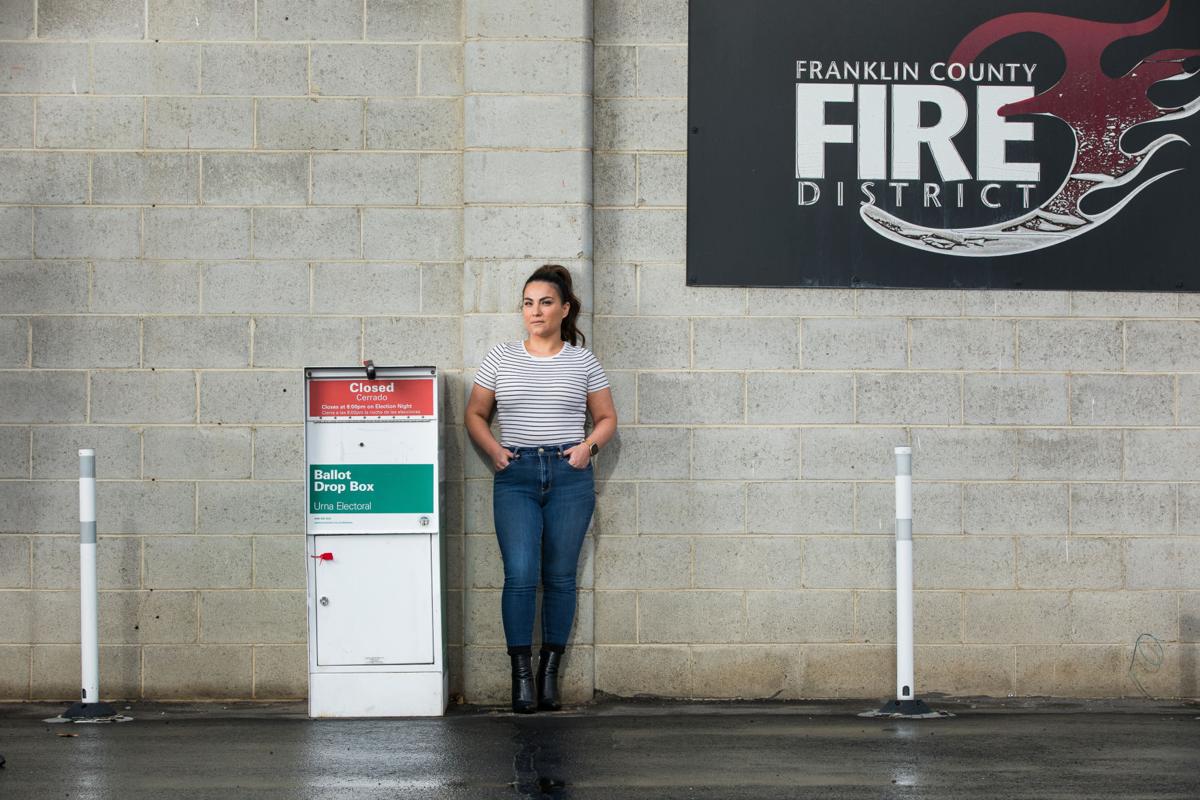 Lisandra Valencia stands by the drop box Tuesday, Jan. 12, 2021, where she deposited her ballot at the Franklin County Fire District’s Station 34 in Pasco, Wash. Valencia, 39, was surprised that her signature on her November 2020 ballot was challenged. She acknowledges that her signature has might have changed over the years. Such “signature instability,” the propensity for signatures to evolve of time, is common, according to experts who have studied the situation.

Lisandra Valencia stands by the drop box Tuesday, Jan. 12, 2021, where she deposited her ballot at the Franklin County Fire District’s Station 34 in Pasco, Wash. Valencia, 39, was surprised that her signature on her November 2020 ballot was challenged. She acknowledges that her signature has might have changed over the years. Such “signature instability,” the propensity for signatures to evolve of time, is common, according to experts who have studied the situation.

Washington state voters with Latino surnames are much more likely to have their signatures challenged and ballots thrown out than other voters, according to an InvestigateWest analysis of eight counties with the highest share of Latino population.

But given the uncertainties around actual causes to this disparity, solutions remain elusive. At a minimum, advocates for the Latino community say, voters need more information about how to correctly fill out and put together their ballots and the envelopes containing them.

They also need to know that their ballot signature is important and that it must match what is on file, even if that is a printed signature.

“If we aren’t communicating that well enough, that’s something we need to solve,” acknowledged Chelan County Auditor Skip Moore.

In Chelan County for the November 2020 election, voters with Latino names were more than six times more likely than other voters to have their ballots rejected because of signature mismatches, InvestigateWest’s analysis showed. InvestigateWest analyzed data from four general and primary elections in Adams, Benton, Chelan, Douglas, Franklin, Grant, Walla Walla and Yakima counties.

State officials are paying attention to the wide variation in rejection rates across counties.

The Washington Legislature in 2020 included a provision in the state budget that requires the state auditor to study ballot signature rejections. That study is currently underway.

The first phase includes a statewide demographic analysis which, like InvestigateWest’s analysis, infers a voter’s race or ethnicity from demographic and geographic information in the voter files, then analyzes ballot rejection rates. The second phase will include analysis of five high-rejection counties and five low-rejection counties to compare variations in processes that might influence their rejection rates.

While the state’s audit will shed light on ballot rejections, some county officials think it is time to consider something entirely different for voter verification. King County Elections is asking the Legislature to develop some kind of alternative to signatures for voter verification as elections staff see the ongoing handwriting challenges of young voters and other groups who have frequent problems with signatures, such as voters with certain disabilities.

Chelan County’s Moore confirmed that he and other county auditors are concerned that in the next 15 years, the majority of voter “signatures” will be print, not cursive. One reason is that both cursive and handwritten signatures are quickly becoming obsolete in the digital era.

They have not figured out a good solution. He called it a “conundrum” to balance election security against Washington’s tradition of removing barriers to voting.

Resources such as more staff, especially bilingual staff, would help, said Benton County Auditor Brenda Chilton. Franklin and Yakima have bilingual coordinators. Adams collaborates with Franklin on voter education and outreach in Spanish, given the crossover among residents and workers in the two counties.

Douglas County Elections Supervisor Ruth Martin said of the disparate mismatch rates: “I see it, I get it, and I want to help with that. We just don’t really have the resources.”

Neither Chelan nor Douglas County has bilingual staff in their elections office. Some of these counties are small, and auditors said they simply need more money to expand voter education throughout the process.

But even translated materials can represent a barrier for some Spanish-speaking voters with lower literacy and education levels. David Morales, former vice chair of the Washington Commission on Hispanic Affairs, described Yakima’s letters to voters questioning the validity of their signatures as a “wall of text.” That could be part of the explanation for higher rejection rates among Latino voters, he said.

Counties and the state could also address cognitive bias in their staff training and, more importantly, in their processes, said Itiel Dror, senior cognitive neuroscience researcher at the University College London.

On any review of a signature, for example, elections staffers and the county canvassing board should only see the signature — no printed names, no date of birth, and no address or other information, Dror said.

Adams County Auditor Heidi Hunt spoke of “the light in people’s eyes when they come to fix their signature and you explain the process.” She continued, “I’m always willing to work with lawmakers on any ideas they have. It’s really important to address these issues.”

InvestigateWest is a Seattle-based nonprofit newsroom producing journalism for the common good. Learn more and sign up to receive alerts about future stories at bit.ly/invw-newsletter.

Marissa Reyes still doesn’t understand why her signature would cause her August 2020 Benton County primary ballot to be tossed out.