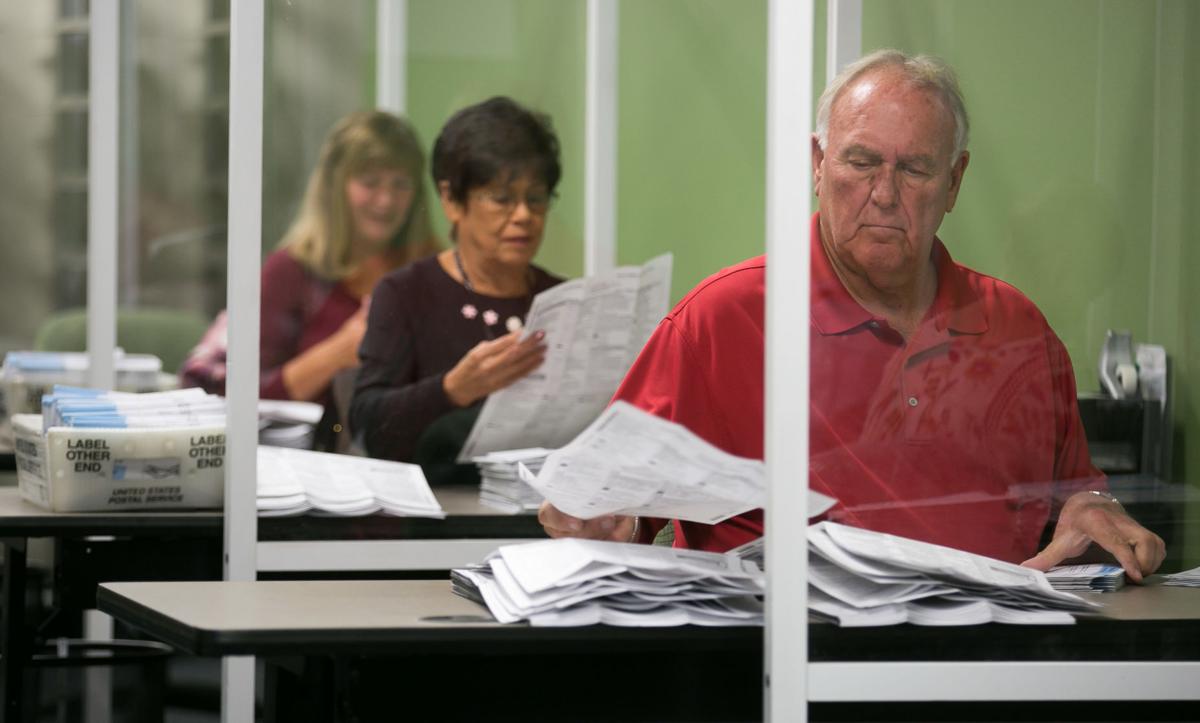 Mark Mochel, an elections volunteer for over 15 years, right, processes ballots between plexiglass barriers at an opening station Thursday, Oct. 22, 2020, in the basement of the Yakima County Courthouse in Yakima, Wash. 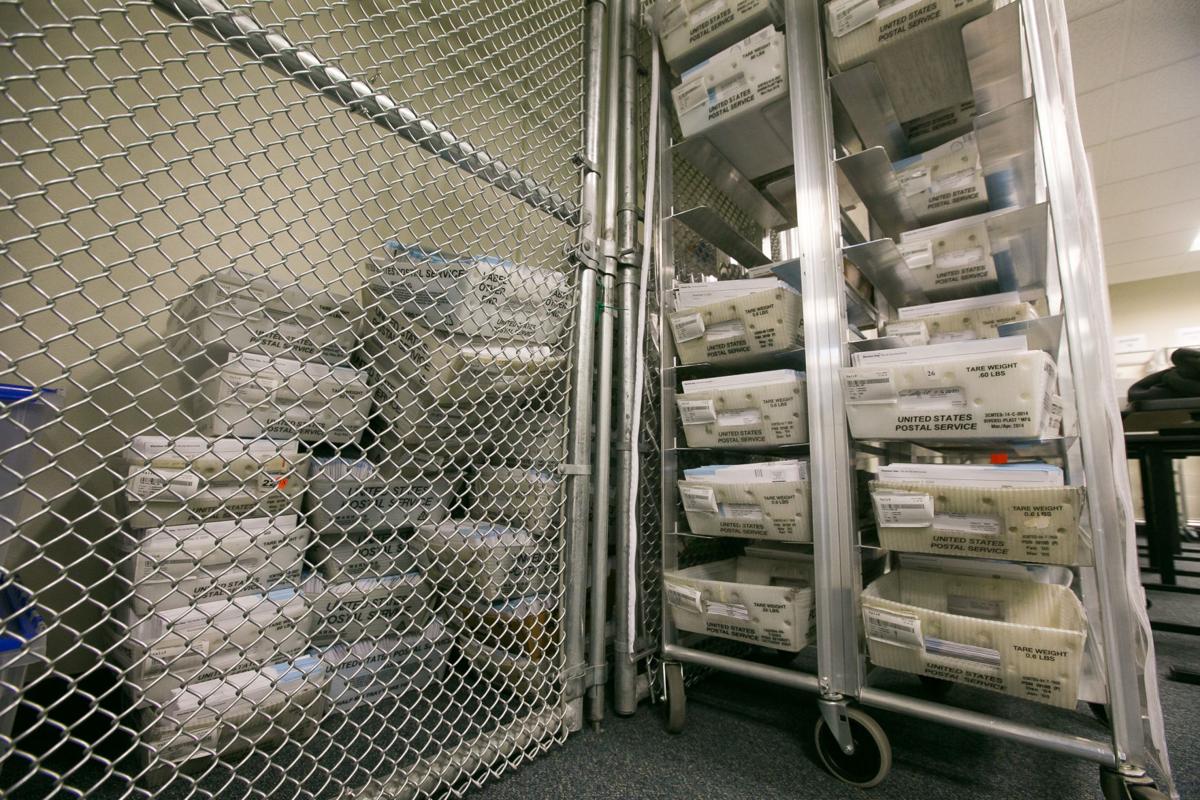 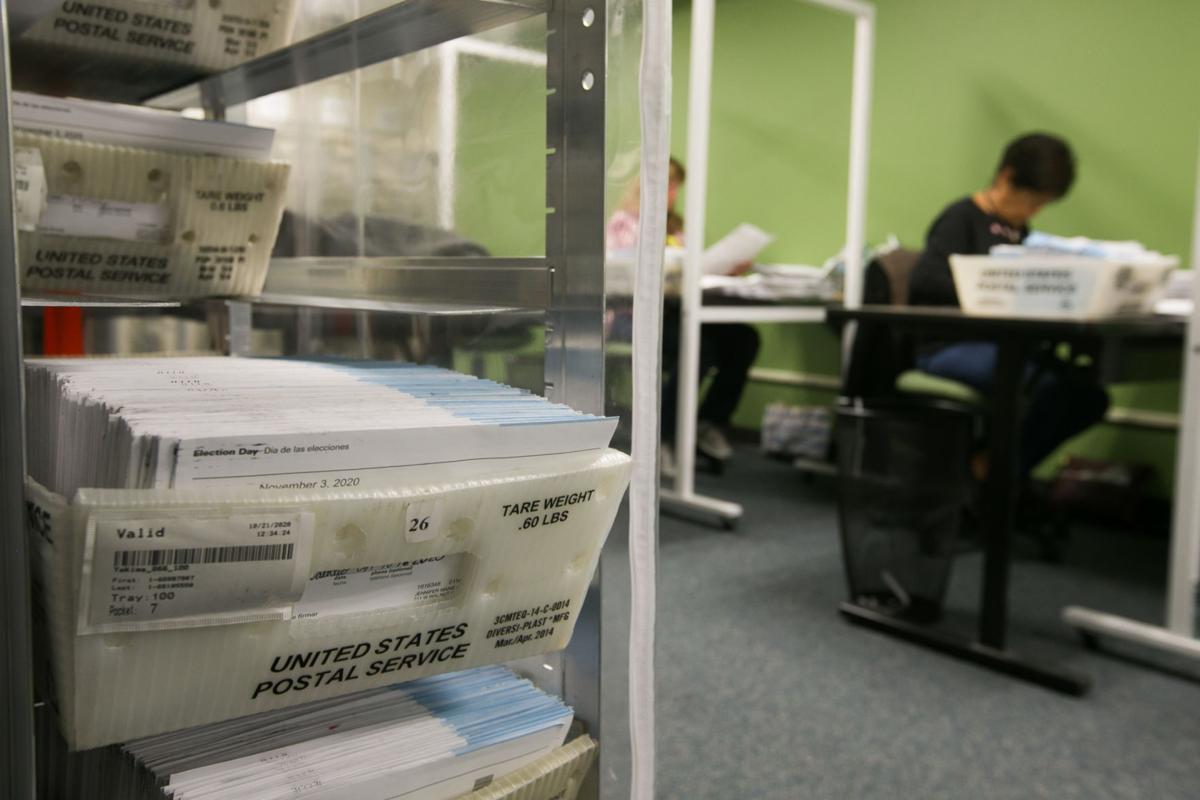 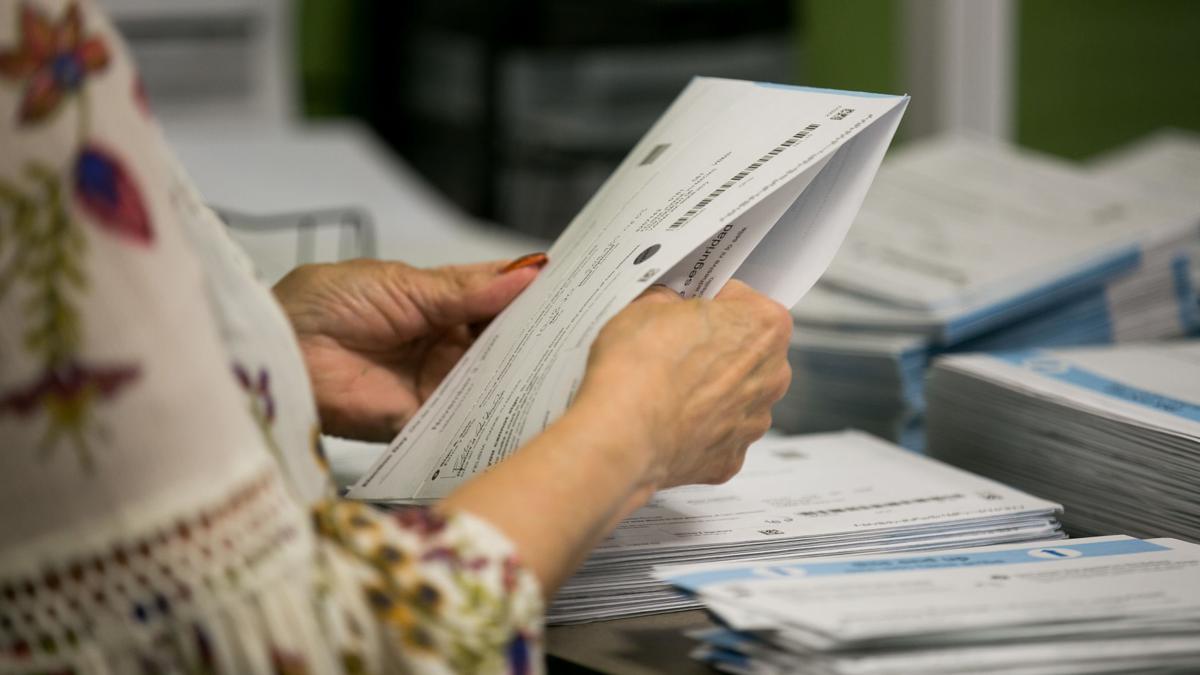 Karen Catey, an elections volunteer for over seven years, processes ballots between plexiglass barriers at an opening station Thursday, Oct. 22, 2020, in the basement of the Yakima County Courthouse in Yakima, Wash. 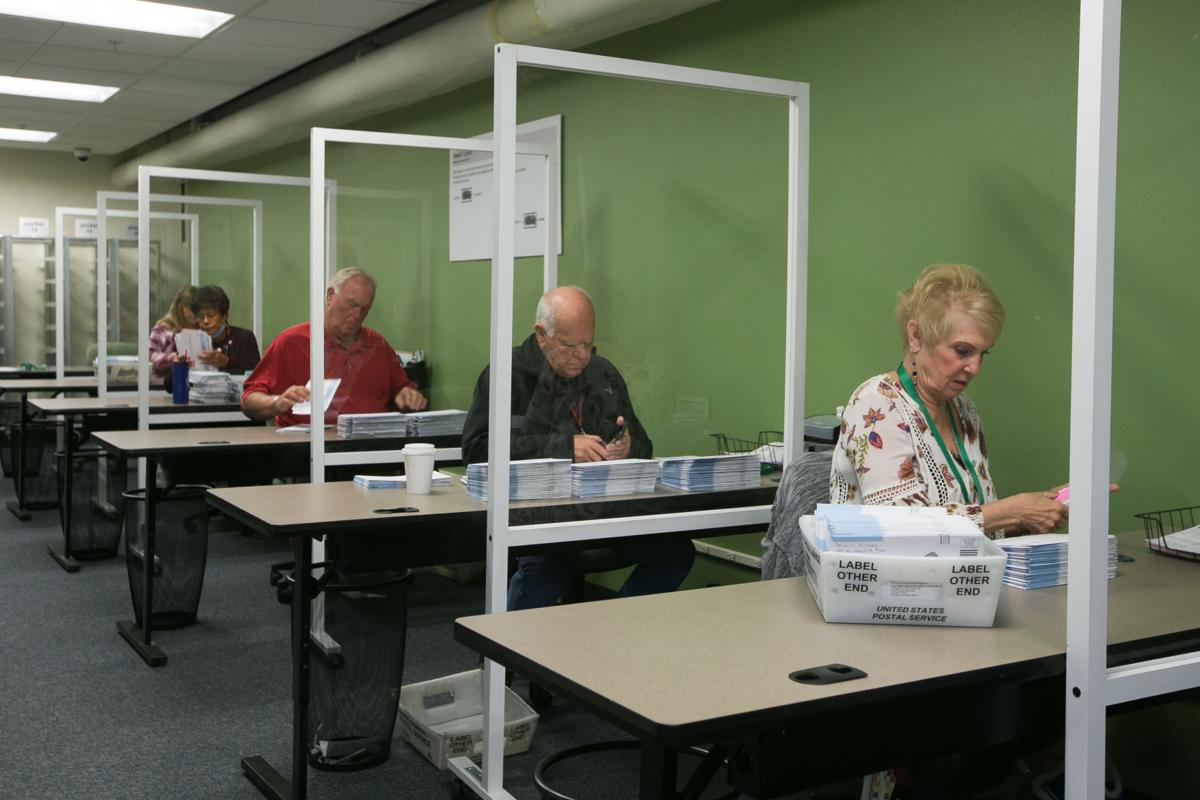 Election volunteers sit between plexiglass barriers as they process ballots at an opening station Thursday, Oct. 22, 2020, in the basement of the Yakima County Courthouse in Yakima, Wash.

Mark Mochel, an elections volunteer for over 15 years, right, processes ballots between plexiglass barriers at an opening station Thursday, Oct. 22, 2020, in the basement of the Yakima County Courthouse in Yakima, Wash.

Karen Catey, an elections volunteer for over seven years, processes ballots between plexiglass barriers at an opening station Thursday, Oct. 22, 2020, in the basement of the Yakima County Courthouse in Yakima, Wash.

Election volunteers sit between plexiglass barriers as they process ballots at an opening station Thursday, Oct. 22, 2020, in the basement of the Yakima County Courthouse in Yakima, Wash.

You probably already know that in certain not-even-that-niche corners of the internet, people are earnestly arguing that the Earth is flat.

A few decades ago, they’d have been printing leaflets or newsletters. Now they can spread their misinformation to a much wider online audience. That’s how the internet works. It provides a public-facing voice to anyone who wants one.

“The people who believe that, they’re not slobbering and unable to hold a job,” Smith said. “They’re pretty normal people in most respects. They just think the Earth is flat.”

The same phenomenon is at play in political misinformation, said Smith, who teaches a UW course called “Seeking Truth in an Age of Cynicism, Misinformation and Political Polarization.”

Everyday people you’d never peg as the tin-hat type are believing and sharing preposterous political misinformation online. Maybe they believe it for religious reasons, maybe because they’re generally distrustful of mainstream thought, maybe they just saw a particularly slick-looking video or read a news post with the right mix of pseudoscience and emotional impact.

And while it’s relatively harmless when you’re talking about flat-Earthers, it has the potential to be a serious problem when you’re talking about political or social conspiracy theories. Misinformation — and its more deliberate cousin, disinformation — can foment confusion in the voting public. And conspiracy theories, such as the widely debunked (but still widely believed) Pizzagate conspiracy and the QAnon movement, can and have prompted violent actions from believers, while specious scientific claims about the coronavirus have hindered our national response to the pandemic.

Political misinformation is nothing new. A decade ago, far-right conspiracists invented the Obama birther movement. In 1972, Nixon operatives forged the so-called Canuck Letter. In the 1950s, the John Birch Society called Eisenhower a communist.

While the concept isn’t novel, the delivery system is. The democratization of news publishing over the past quarter-century, facilitated by the rise of the internet and birth of social media, means we now have a previously undreamed of wealth of news sources. No more are we beholden to the major newspapers and the three TV networks that once served as gatekeepers, deciding what was news and what wasn’t.

Now anyone can find the news they want online. In fact, anyone can put the news they want online. In theory, that sounds great. More people have a seat at the table. It’s a marketplace of ideas. The trouble is there aren’t adequate checks on the spread of misinformation, much of which is dressed up enough to pass as credible news. The resultant glut of often contradictory information achieves the twofold goal of spreading falsehoods and sowing distrust in all media, even the real-deal, fact-checked stuff.

“If anything, I think people are confused about what information to believe,” said Todd Schaefer, a Central Washington University political scientist who teaches courses in public opinion and political communication. “And that in and of itself could be a win for the people creating misinformation or disinformation.”

The lack of a national down-the-middle media culture like we had in the age of Walter Cronkite also means people tend to be more inclined to consume news coverage that aligns with their own views, Schaefer said. They aren’t critically examining the things they see on their Facebook feeds; they’re just getting angry and passing them along. And sites like Facebook and Twitter, which have over the past couple of years made attempts to curb the spread of misinformation, can’t stay ahead of all of it.

“Efforts have been made on the supply end to limit this stuff,” Schaefer said. “But the people producing it have come up with ways of getting around that. And the people consuming it like seeing things that reinforce their views, even if they’re not true or logical.”

Such is the power of a slick, well-presented argument meeting a receptive audience. The key to every conspiracy theory, after all, isn’t on the supply side; it’s on the demand side. People are attracted to wild stories. That’s how QAnon — a wide-ranging theory that essentially boils down to “a ring of top-level Democrats and their high-profile supporters sexually abuse and torture children to harvest their adrenochrome, and only Donald Trump can stop it” — has gone from the fringes of the internet to mainstream politics. Marjorie Taylor Greene, a Georgia Republican running unopposed for Congress, is a proponent of the theory.

The audience for such an outlandish conspiracy theory didn’t come from nowhere, Schaefer said. They were primed by the overall deterioration of the legitimacy of online news and information.

“Now it’s broken down to where they don’t have any standard of truth,” he said. “QAnon is a good example of that.”

The politicians and causes that benefit from its spread may not exactly give it the seal of approval, but they also don’t condemn it. Trump has been asked to condemn QAnon, for instance, and has not. That’s another new development, Smith said, pointing to conservative commentator William F. Buckley’s famous condemnation of the John Birch Society in 1962.

“There would’ve been, even 10 or 20 years ago, a stronger push to separate the party from some of the more extreme elements,” Smith said.

Even those not inclined to believe the most sensational misinformation can fall prey to subtler forms, such as Trump and right-wing media’s attempts to instill mistrust of voting systems. It has been repeatedly found that such intimations are without evidence, yet they have spread through mainstream channels. The Yakima County Republicans Facebook page, for instance, earlier this month posted a screenshot of a tweet by conservative political commentator Charlie Kirk saying “Pennsylvania just rejected 372,000 mail-in ballots,” a claim that was verifiably incorrect and had been deleted by Twitter for violating its rules about misinformation related to voting. The screenshot is still there, as are several other untrue or misleading posts, including a link to a Facebook-banned video purporting to prove that Joe Biden orchestrated the killing of the SEAL Team Six members involved in the Osama bin Laden mission. That claim is verifiably incorrect.

That such misinformation is now spread through seemingly reputable channels has made it harder to discern, Smith said.

“It’s kind of a big mess,” he said. “There’s always been misinformation, but it’s much easier to access now.”

So what is your average citizen to do if they want to know what’s real and what’s not in their news feed? They need to approach it skeptically, Smith and Schaefer said. They need to check it against other coverage and use fact-checking sites. They need to puncture the partisan media bubbles they’re in. But that’s hard when partisan news outlets are doing partisan fact-checking, and every fact seems to have a counterfact. Cronkite used to end his newscasts by saying, “And that’s the way it is,” but a newscaster who says that nowadays would be laughed off the stage, Smith said.

“Because we’ve had a breakdown of accepted sources of information, it’s going to be really hard to get widespread agreement on things even as simple as, ‘Is there a deadly virus?’” he said.

The only way to sift through it is to be open to the idea that maybe your beliefs are wrong, Smith said.

“We’re all flawed as processors of information, and if people just had more humility that would help out a lot,” he said.

On the supply side, it may be time to examine some sort of regulation of social media and mass media that addresses misinformation, Schaefer said. On the demand side, for now it’s up to people to do the extra work of searching out information beyond what’s presented to them in their tailored news feeds.

“People have all these choices,” he said. “But what that means is they’ve got to make an effort.”