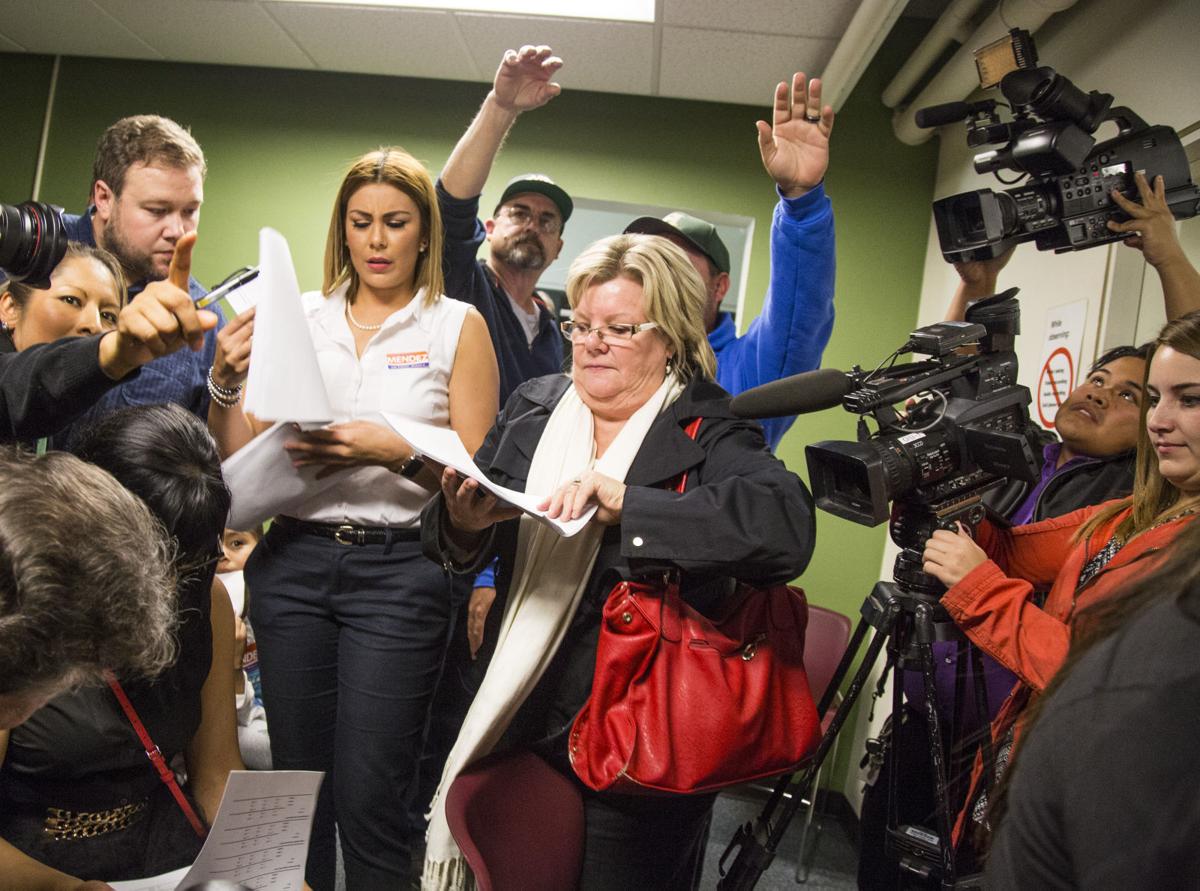 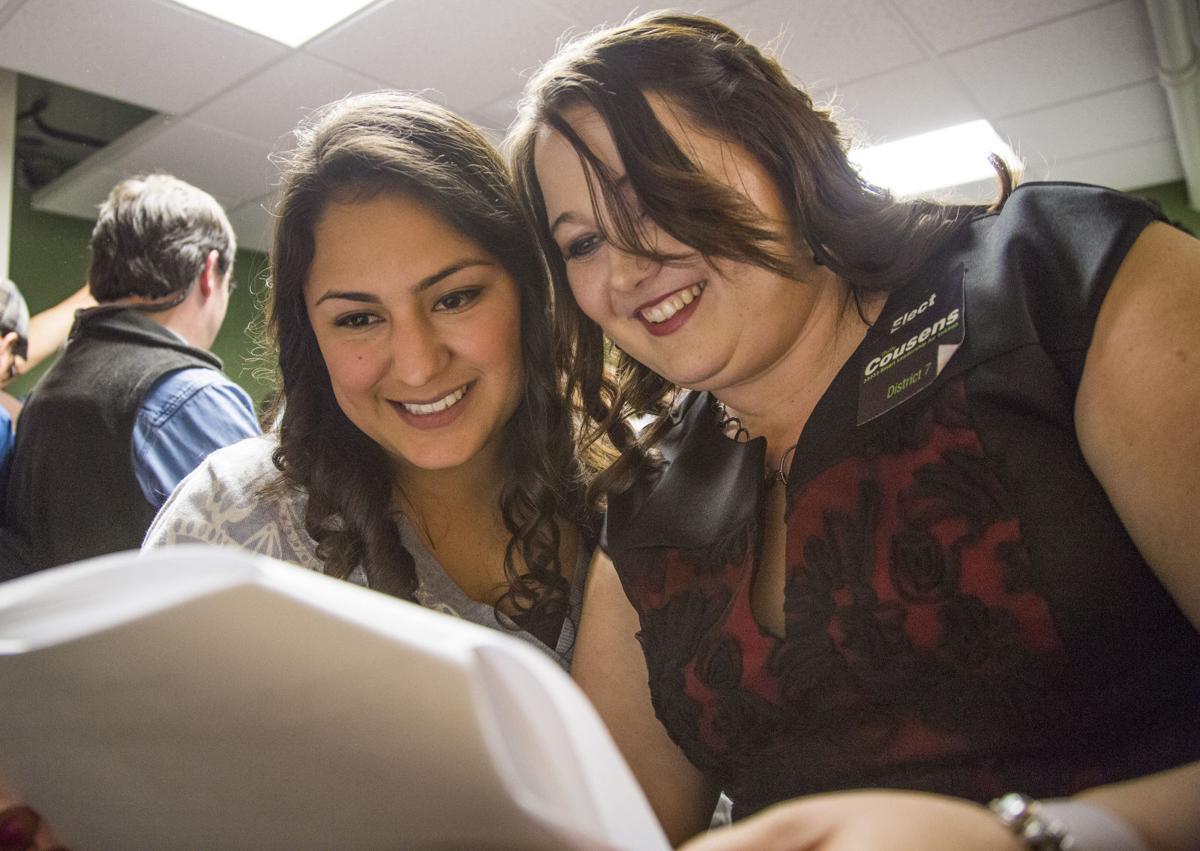 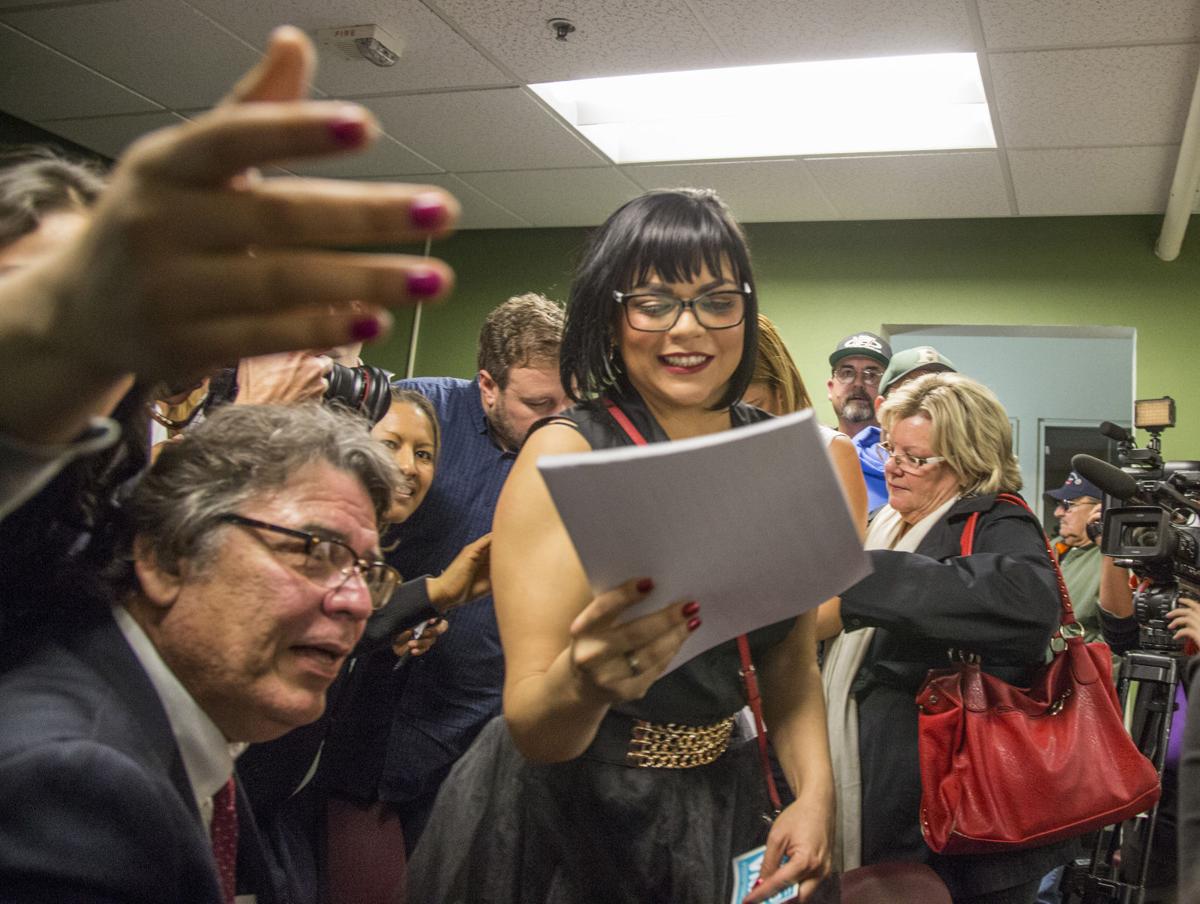 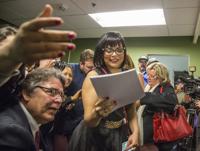 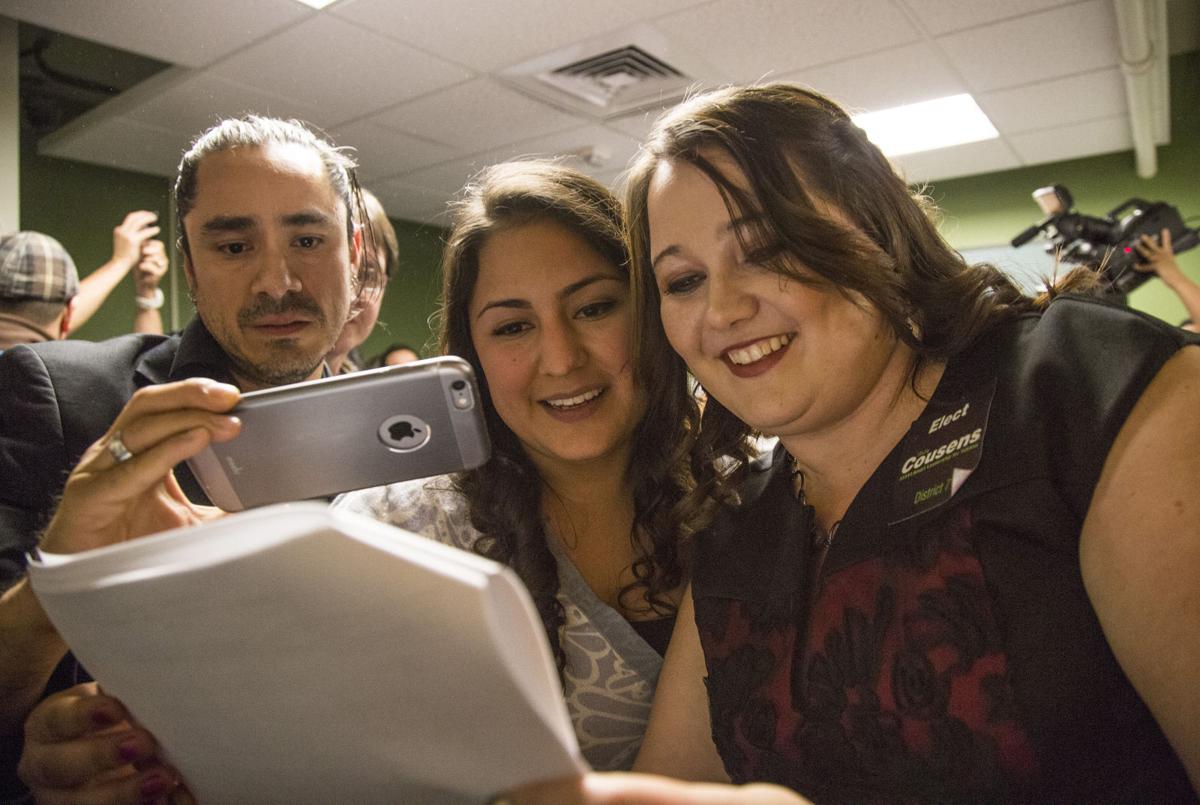 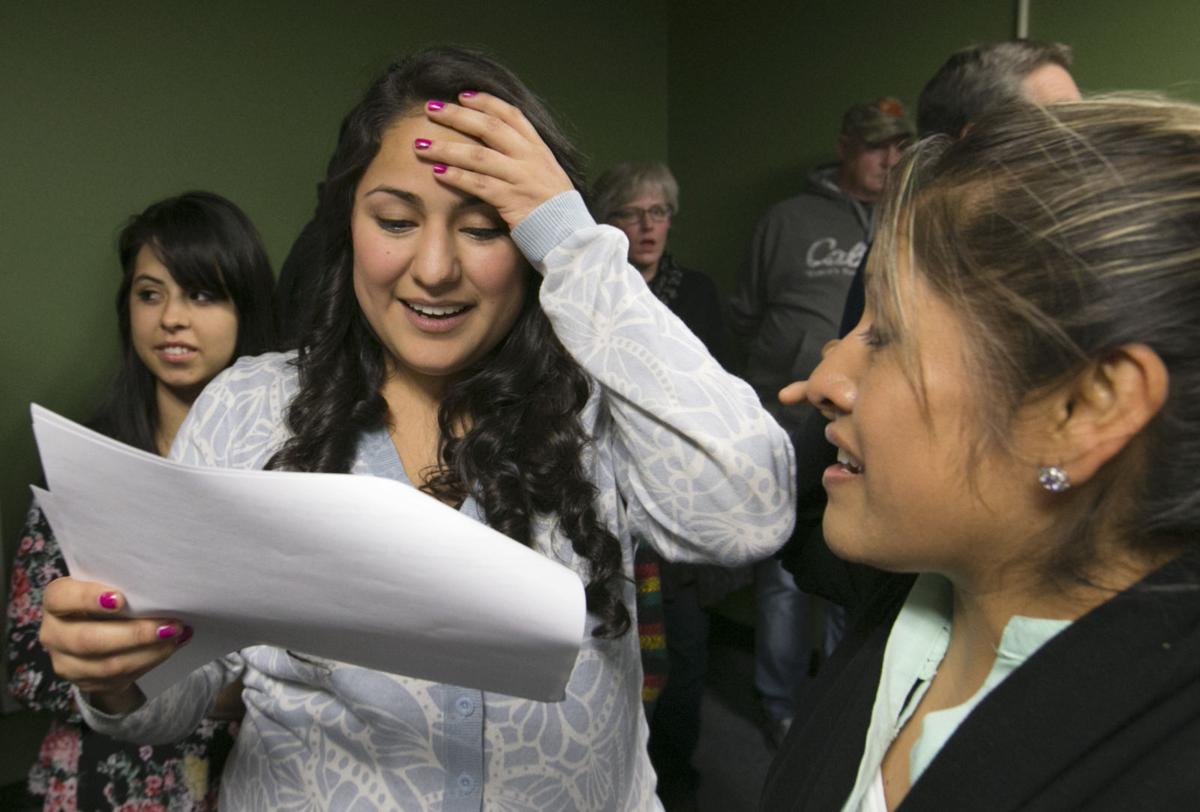 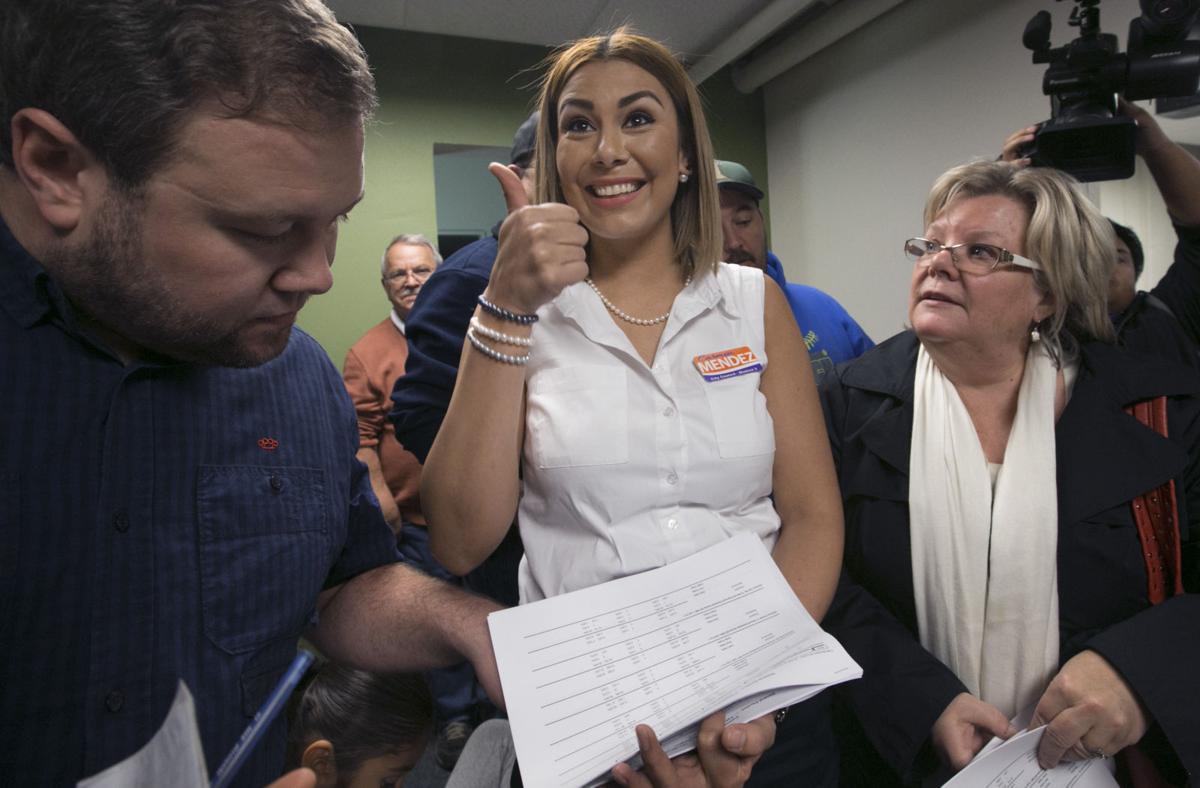 Yakima City Council candidate Carmen Mendez gives a "thumbs up" after looking at election returns which gave her a slim lead over opponent Kelly Rosenow in the district 3 race. (GORDON KING/Yakima Herald-Republic)

Yakima City Council candidate Carmen Mendez gives a "thumbs up" after looking at election returns which gave her a slim lead over opponent Kelly Rosenow in the district 3 race. (GORDON KING/Yakima Herald-Republic)

Carmen Mendez has doubled her lead over Kelly Rosenow in the race for Yakima City Council District 3, but the outcome remains too close to call.

Mendez has 785 votes, or 52.9 percent, to Rosenow’s 677, or 45.6 percent, according to the latest ballot counts released by the Yakima County Auditor’s Office Wednesday afternoon.

Political ceilings were broken Tuesday as two Latinos were elected to the Yakima City Council, and a third was leading her opponent.

And in another first, the majority of the City Council’s members will be female.

Until Tuesday, Yakima had never elected a Latino or more than three women to the council. At least five of the seven seats will now be held by women if early results hold; a sixth seat remains too close to call.

Tuesday’s election results also indicate the city’s proposed downtown plaza will be rejected when construction plans come up for a vote in the spring. Four of the seven leading candidates have said they oppose the city’s $14 million proposal.

Election Day was the culmination of three years of build-up following a voting rights lawsuit that upended the city’s old elections system and led four incumbents not to seek re-election. More than 100 people filed into the basement of the Yakima County Courthouse to see results released, and cheers filled the stairwells as the results were announced.

Incumbents who choose to seek re-election were handily defeating challengers.

The council will include four new members who may be asked to hit the ground running. Before the elections were even held, the current council voted that the newly elected members should serve on a committee to decide the recruitment and hiring process of a permanent city manager.

City Manager Tony O’Rourke threw a wrench into those plans at the same time Tuesday when he told the council he no longer intends to resign, an announcement that prompted a heated debate among council members. However, it’s unlikely that Tuesday will be the end of the council’s discussion over O’Rourke’s future with the city.

He had previously said his last day would be Dec. 31.

Tuesday’s elections were the first under a new district-based system ordered by a federal judge in February. The court order was the result of a lawsuit brought by the American Civil Liberties Union of Washington in which the judge determined Yakima’s previous elections system denied Latino interests at the ballot box.

The city is still appealing that ruling in the 9th U.S. Circuit Court, but it’s possible a new council elected under that system could rescind the appeal. However, that would erase all hope of recovering $1.8 million in legal costs the judge ordered the city to pay the ACLU.

The new council also inherits a number of ambitious and expensive capital projects that the old council approved in just the last six months, including $5 million for a 19-field soccer complex and $4.5 million for an aquatics center. The city is partnering with nonprofits to construct both facilities.

With $8 million in capital investments planned for North First Street and millions more invested in recent years in improving streets around the city, the council will find itself with little wiggle room in the budget for the immediate future.

But if the city nixes its $7 million commitment to the downtown plaza, which now appears likely, that may free up funds for other projects. Dulce Gutierrez, Avina Gutierrez, Cousens and Lover have all said they oppose the city’s current plaza proposal.

Those elected in even-numbered districts will have to run again in two years, according to the court order. That’s to stagger elections so that going forward all seven elections won’t be held in the same year.

Dulce Gutierrez, who holds a bachelor’s degree from the University of Washington in American ethnic studies, said she never imagined she would one day represent northeast Yakima, her childhood neighborhood, on the council.

“No one ever door-belled my neighborhood,” Gutierrez, 26, said of past elections. “No one was ever coming around to put that idea in our heads that we could serve in city government.”

Gutierrez had been a Democratic activist prior to running for the council. She works as operations manager for Yakima Valley Hops.

Joy, anxiety and a swirl of other emotions caught up with Avina Gutierrez on Tuesday night when she saw that she will be one of the first Latinos ever elected to the Yakima City Council.

“It’s all of those things wrapped into one,” said Gutierrez, 36. “It’s going to be a roller coaster.”

Gutierrez grew up in Yakima before attending the University of Texas at El Paso. Before opening her own consulting firm, she worked for a Texas state senator in a variety of roles, including office budget management.

Carmen Mendez and Kelly Rosenow will be following ballot returns closely in the coming days, with Mendez holding a 48-vote lead.

This isn’t the first time their race has gone down to the wire. In the August primary, Mendez finished ahead of Rosenow by just five votes.

“I absolutely feel like these results will hold,” Mendez, 28, said Tuesday with her 7-year-old daughter by her side. “I feel like I have done everything I can to win this.”

But Rosenow said he has every reason to follow the ballot counting to its conclusion.

“We got out the vote and were competitive enough,” Rosenow, 59, said. “We’re going to watch it out to the end.”

After 10 years on the council, Lover has said this will be his last term. Lover, 74, and other candidates in even-numbered districts are running for two-year terms under the new district system so that future elections will be staggered.

“I appreciate the voters’ confidence and I’ll work as hard as I can with the new council.” Lover said. “They’re a nice young crowd with a lot of ideas. I’ll show them how to push policy through, even if I might not necessarily vote for it.”

Coffey, 68, was soundly re-elected in spite of spending much of the last year as a punching bag at council meetings and public forums.

Often the only incumbent to show up for candidate forums, Coffey took the brunt of public criticism even for city actions she opposed. But name recognition — she served 19 years as CEO of the Yakima Valley Visitors & Convention Bureau before being elected in 2007 — and her ability to roll with the punches appear to have endeared her to voters.

Challenger Pell had hoped to scoop up votes that went to other candidates in the primary and swing some away from Coffey to pull the upset, but early voting returns suggest that didn’t happen.

Despite improving significantly on his primary performance, Keefe didn’t come close to knocking off incumbent Adkison.

Adkison, 68, has served on the council for six years and has been one of O’Rourke’s biggest supporters there, which will be tested by the current resignation saga.

Adkison said she will work to see the plaza come to fruition, despite the fact that a majority of those elected have been critical of the plan.

Cousens, 35, said it “felt historic” to be elected to the Yakima City Council. That’s because she’s part of the first female council majority in the city’s history.

While her opponent, Berg, snagged a number of key endorsements during the election, Cousens raised much more in cash to fuel her campaign. Cousens raised more than $13,000, while Berg didn’t report any fundraising to the state Public Disclosure Commission.

Now Cousens says she’ll be in touch with city officials and current council members to hit the ground running.

“There’s a lot of work to do, and I’m excited to do it,” said Cousens, an accountant at Windermere Real Estate.

Carmen Mendez has doubled her lead over Kelly Rosenow in the race for Yakima City Council District 3, but the outcome remains too close to call.