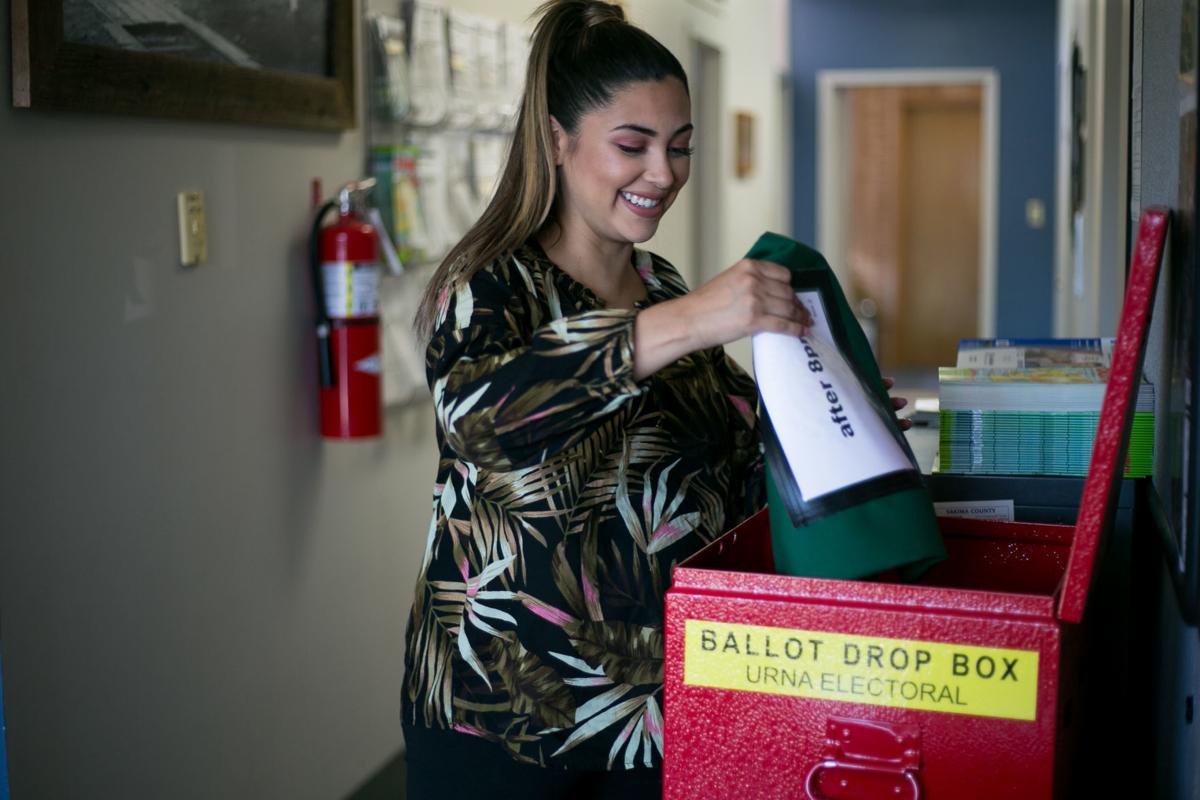 Jessica Martinez, bilingual elections office support specialist with the Auditor’s Office, places an oath and seal record inside a drop box near the front entrance of Selah City Hall on July 16. 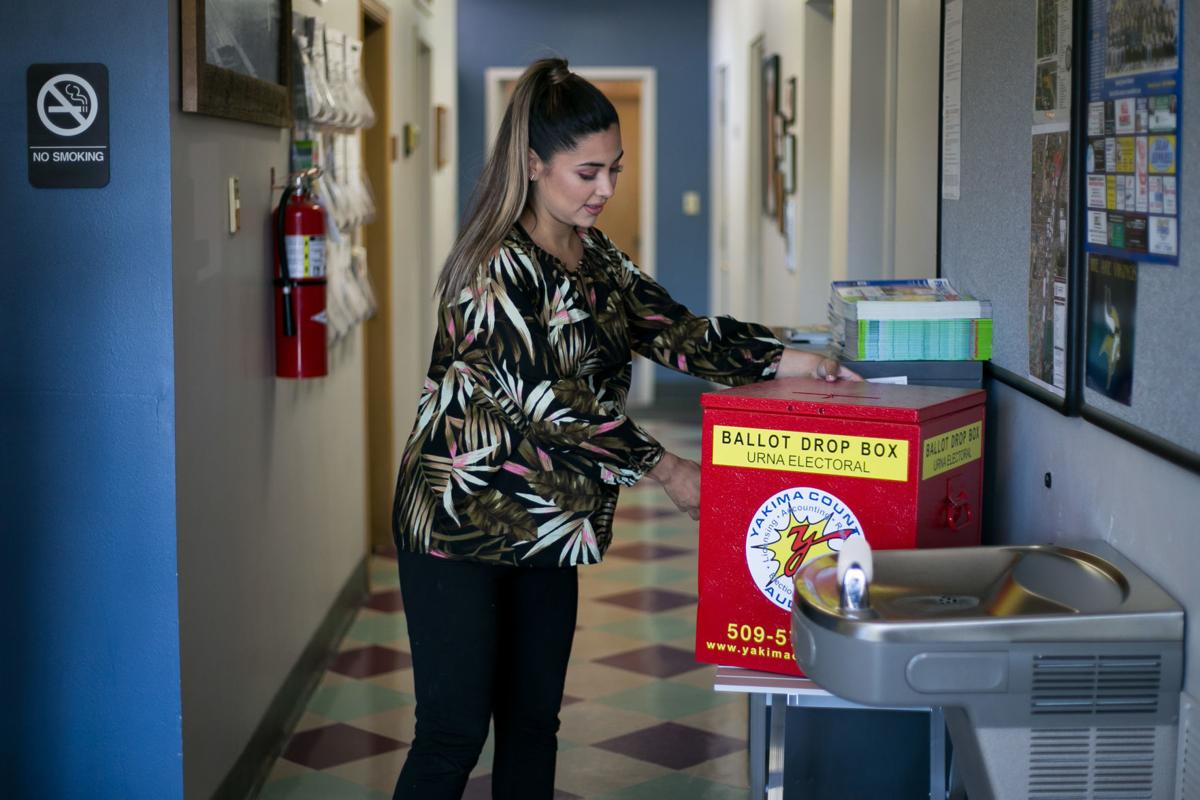 Jessica Martinez, bilingual elections office support specialist with the Auditor’s Office, places an oath and seal record inside a drop box near the front entrance of Selah City Hall on July 16.

Change is scary. And when changes occur in the election process, it can create concern.

Charles Ross, the Yakima County auditor, understands this. He is well aware of all the chatter about VoteWA, the state voter registration database making its official debut with the Aug. 6 primary elections. It’s new and it’s different, but it’s necessary, Washington Secretary of State Kim Wyman has said.

Wyman calls the VoteWA system an important tool to combat cyberthreats. A team of more than 80 election and IT professionals from the state’s 39 counties, the state and its vendor, BPro, created VoteWA, Wyman said.

The system has safeguards that make sure only approved users gain access, Wyman notes. Its creators added multiple layers of firewalls, monitoring and threat detection software to protect election servers from intrusion.

That’s a lot of technical talk. But what exactly does it mean for voters?

If you ask Ross, it means even fewer excuses for not voting.

“The VoteWA (system) is just incredible. You almost can’t believe it,” Ross said, calling it “an amazingly powerful piece of software.” The state has made it easy to participate, he added.

There’s no doubt there will be difficulties, he said. “We’re already seeing and fixing challenges with the back end of the system. ... We’re excited, but we’re nervous, too. Any time you make a system change that affects this many people, there’s always going to be difficulties.”

He’s still optimistic. “In Yakima, we’ve been running all kinds of tests. Things are looking good,” he said. “We’re confident that the system’s going to work well.”

Washington voters have several weeks to vote by mail. With ballots going into the mail locally this week, here’s what’s new in this year’s August primary:

• Register to vote — and vote — on the very same day, the entire day

“With the new system, it allows us to safely move to the world where you can register on Election Day and vote on Election Day. ... Same-day registration is the biggest thing,” Ross said.

The old voter database system was not powerful enough to handle that, Ross said.

The changes eliminate the blackout period on voter registration, allowing people to vote in a new place if they moved. This also allows people who turn 18 on Election Day or the day before to vote, Ross said.

“This makes sure people are participating in the election they’re supposed to,” he said. “No more blackout period; no more excuses.”

There’s something new for those getting driver licenses, too. Formerly, they had the option of registering to vote. It’s now an opt-out process unless applicants tell officials they don’t want to vote, Ross said.

“Your signature in that process verifies citizenship. That signature on your driver’s license becomes your voting signature,” Ross said.

He wants to register as many people to vote as possible. That includes setting up a table in the federal courthouse for those who just received citizenship.

“And then we do other outreach programs, too, in communities where we think outreach is valuable,” Ross said.

• More places to take your ballot; no stamp required

Options to turn in your ballot are expanding. First, you won’t need a stamp to mail in your primary ballot.

The satellite office will be open from 8 a.m. to 8 p.m. on Election Day. People can register to vote in person there that day, or drop off their ballot at a drop box. The staff will be fully bilingual and can also issue a ballot to voters, Ross said.

“We’re all last-minute people. Say you live in Tieton but work in the Lower Valley,” and forgot your ballot, Ross said. “You don’t have to drive home, find that ballot, log onto a computer. Just show up between 8 and 8. They’ll issue you a new ballot. We’re hoping that’s helpful to people in the Valley.”

There are no plans to open another satellite location, but Ross noted staff members have installed more bright red ballot drop boxes. They recently placed new ones in Harrah, Wapato and Selah.

“You have a drop box in every single town in this county. We’re installing boxes out in the rural parts of the county,” he said, including census-designated places. “Those red boxes are open until 8 p.m. on election night.”

“Those 24-hour boxes made a huge difference,” Ross said. “ As soon as they went in, they were well-used.”

The signature is the most important thing a voter has, Ross said. It’s “absolutely critical” that voters sign their own ballot the way they registered. Those who don’t sign their ballots get a phone call from the Auditor’s Office.

“If you forgot to sign your ballot, we’re contacting you immediately,” Ross said. His staff is mandated to call and will send a letter, which the voter signs and sends back.

It’s a “very very small amount of people” who don’t sign their ballots, Ross said, adding that hardly any ballots are rejected for problems.

Voters may check their registration status at myvote.wa.gov.

“It’s like your medical record for voting. It’s a wonderful site. ... It will show you all the elections you’ve participated in; where we have you registered to vote,” for example, Ross said.

“We always encourage people to go on there and update their information right now,” he said.