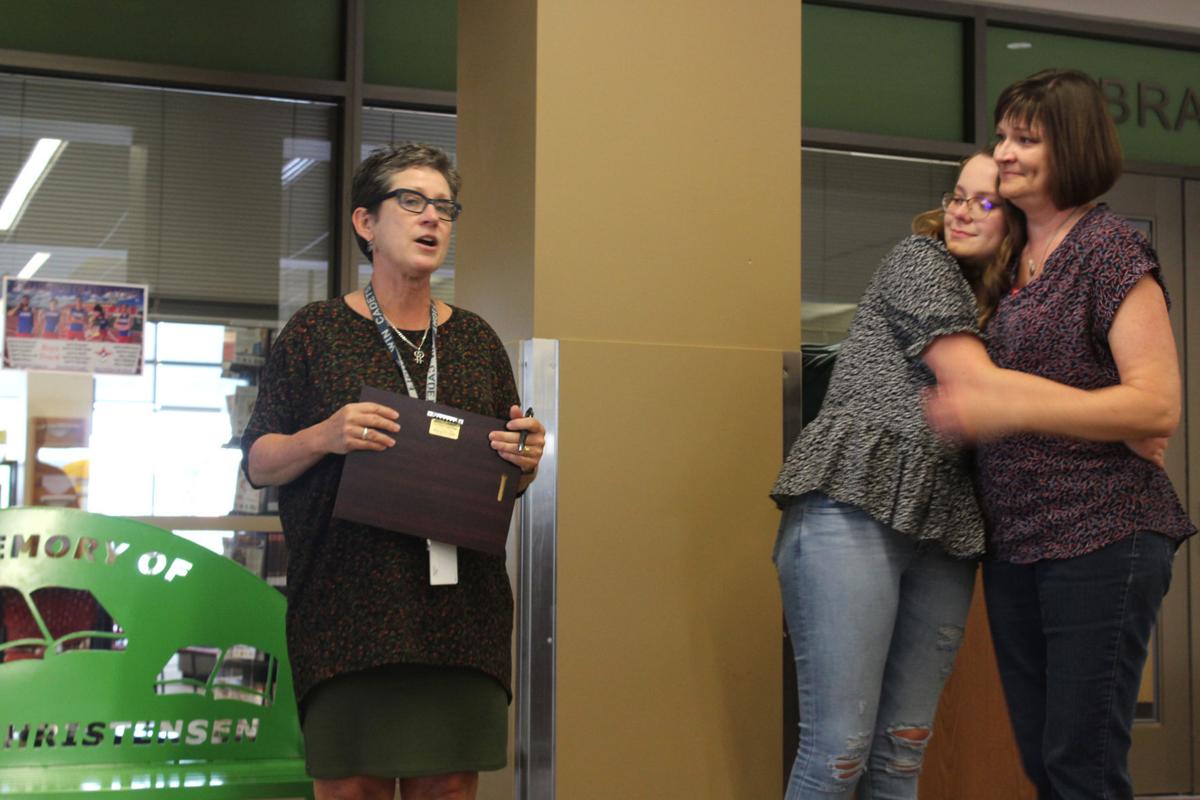 Lori Benoit, a teacher at Eisenhower High School in Yakima, presents a plaque in commemoration of Eisenhower graduate Justin Christensen to Justin’s sister Rachel and mother, Sarah, on Friday outside the school library. Christensen died in November 2017 after battling Duchenne muscular dystrophy for many years. 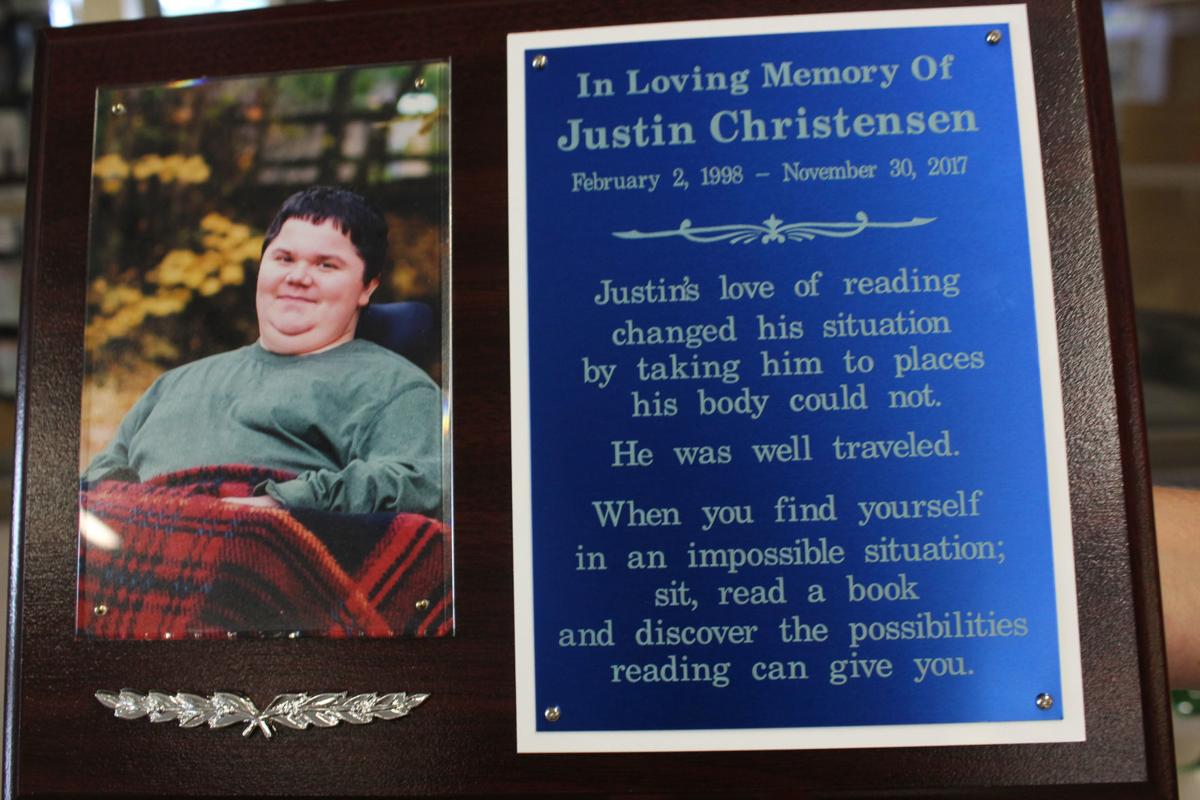 Christensen was a student at Yakima Valley College when he died. His plaque is meant to inspire students who find themselves in difficult situations.

Lori Benoit, a teacher at Eisenhower High School in Yakima, presents a plaque in commemoration of Eisenhower graduate Justin Christensen to Justin’s sister Rachel and mother, Sarah, on Friday outside the school library. Christensen died in November 2017 after battling Duchenne muscular dystrophy for many years.

Christensen was a student at Yakima Valley College when he died. His plaque is meant to inspire students who find themselves in difficult situations.

What Justin Christensen’s teachers remember most about him was his love of reading.

At Nob Hill Elementary School, he was known as the “AR Superman” for the number of Accelerated Reader books he blazed through. It’s also rumored that he read every book on the shelves of the Wilson Middle School library.

Reading took Justin to places his body would not allow him to go, recalled Lori Benoit, his American Sign Language teacher at Eisenhower High School.

Justin was 5 when he was diagnosed with Duchenne muscular dystrophy — a rare disorder caused by mutations in a person’s genes that impacts about 1 of every 7,250 males ages 5 to 24, according to the Centers for Disease Control and Prevention.

Over time, the disorder decreases a person’s mobility and makes daily tasks increasingly difficult, if not impossible. The disorder confined Justin to a wheelchair before taking his life on Nov. 30, 2017 — a year after he had graduated from high school, and while he was studying at Yakima Valley College.

The diagnosis never stole his love of life, Benoit said

“Justin knew his life had an expiration date, but he never let that get in the way of his reading or his education,” Benoit said Friday, when friends, family and faculty gathered outside the library at Eisenhower High School to dedicate a plaque and bench in Justin’s honor.

The bench — a bright “Seahawks” green chosen by his sister, Rachel, because Justin loved the Seahawks — was designed by Shane Snodgrass and created by the school’s welding booster club.

The bench and the plaque are symbols that Justin is remembered by those whose lives he touched. Their placement outside the library will also encourage the school’s students, some of whom may not have known him, to embrace his passion for reading.

“Justin’s love of reading changed his situation by taking him to places he could not,” the plaque reads. “He was well traveled. When you find yourself in an impossible situation; sit, read a book, and discover the possibilities reading can give you.”

Sarah Christensen, Justin’s mother, said her biggest fear was that her son would be forgotten. The bench and the plaque seemed like a good opportunity to help people remember him, she said.

“I want people to remember him because he was amazing,” she said. “He handled his difficulties in a way most adults could not.”

She brought a shoulder bag of stuffed animals — all dogs — to the commemoration. Some she had picked up while Justin was still undergoing surgeries and treatment — fluffy sources of comfort with huge eyes that accompanied them to Children’s Hospital in Seattle every six months. Others she had picked up following his death.

“Justin loved dogs, and they’ve always brought comfort to me,” she said. “I keep going places and seeing dogs he would want to buy, so here they are.”

Justin’s love of animals was immeasurable, as was his love for Legos, movies, cribbage, fishing, and the family’s annual vacation to Orcas Island, his 2017 obituary noted.

Benoit said the fact that Justin, who had limited mobility in his hands, took her American Sign Language class was telling of his personality.

“Sometimes when people see others in a wheelchair, they make assumptions about that person’s abilities or intelligence, but Justin helped break all of those notions,” she said. “He was brilliant. He just willed himself to stay positive all the time.”

Dan and Jeneanne Siekawitch, Justin’s grandparents, and Jean Amend, his great-grandmother, also attended the commemoration. They all remembered his bright eyes and infectious laugh.

“He was so intelligent, a very neat young man,” said Amend. “It’s too bad the world will miss out on the contributions he would have made.”

Rachel Christensen, a student at Eisenhower High School, said Justin was her biggest supporter. He pushed her to be the best version of herself. She asked school staff to honor her brother’s memory by pausing each time they came to the bench and remembering the good times.

“It’s hard for me to be here, to see the bench, now,” she said. “But I hope that in 10 years when I come back, I’ll still be able to remember the good times. The big thing about this bench is it shows that a Cadet will always be a Cadet. He’ll always be here now.”

Benoit also praised Rachel, who she said had stepped up to help with Justin’s care without ever complaining.

“Rachel had to take on so many adult responsibilities, and she fell right into it,” Benoit said. “They had a normal brother and sister relationship, in that they’d sometimes fight, but she was fiercely defensive of him. They’re both very special.”