You are the owner of this article.
Edit Article Add New Article
You have permission to edit this article.
Edit
Home
News
Bottom Line
Sports
SCENE
Photos & Video
Opinion
Obituaries
Unleashed
Classifieds
The Vanished
1 of 9 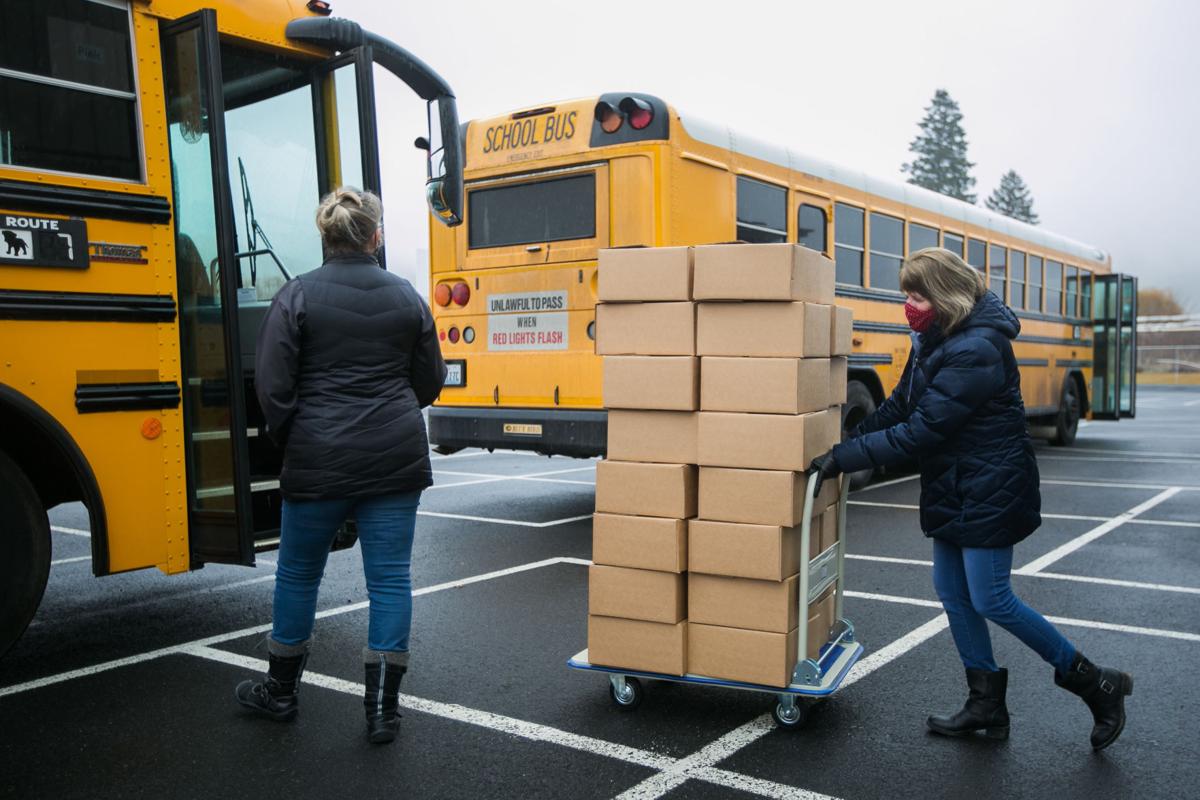 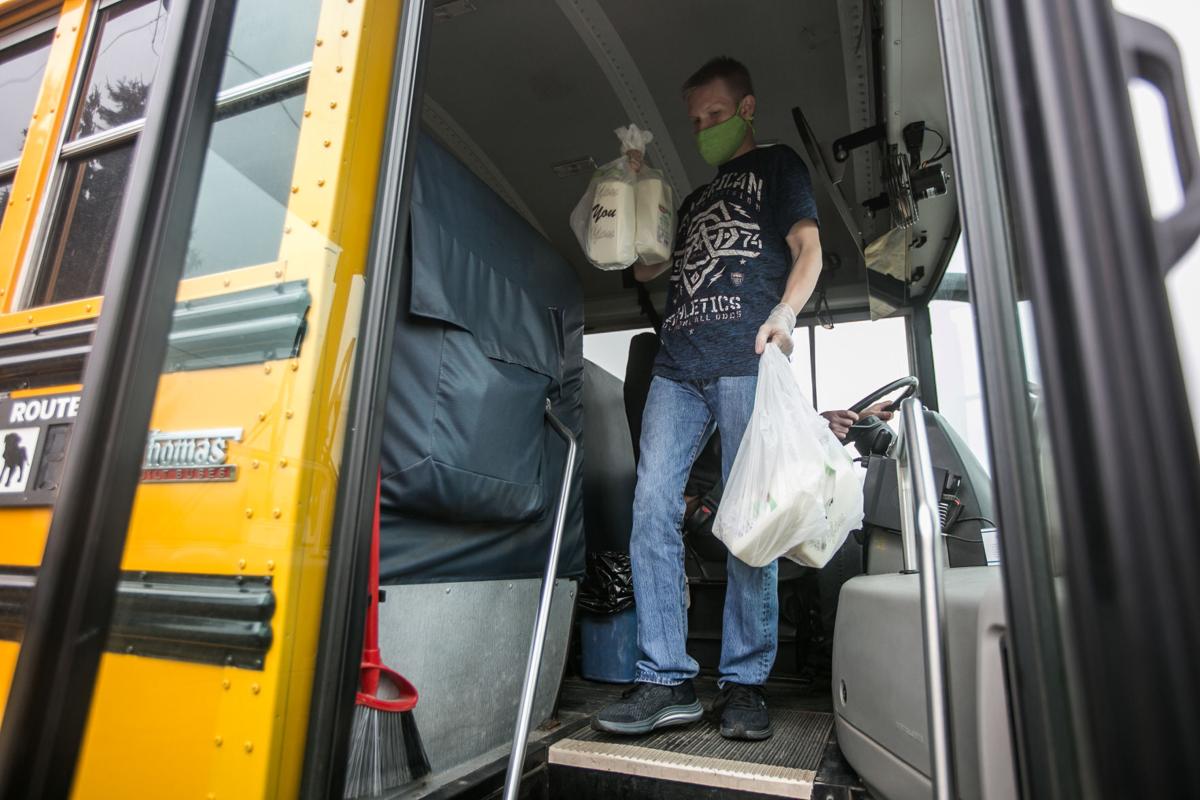 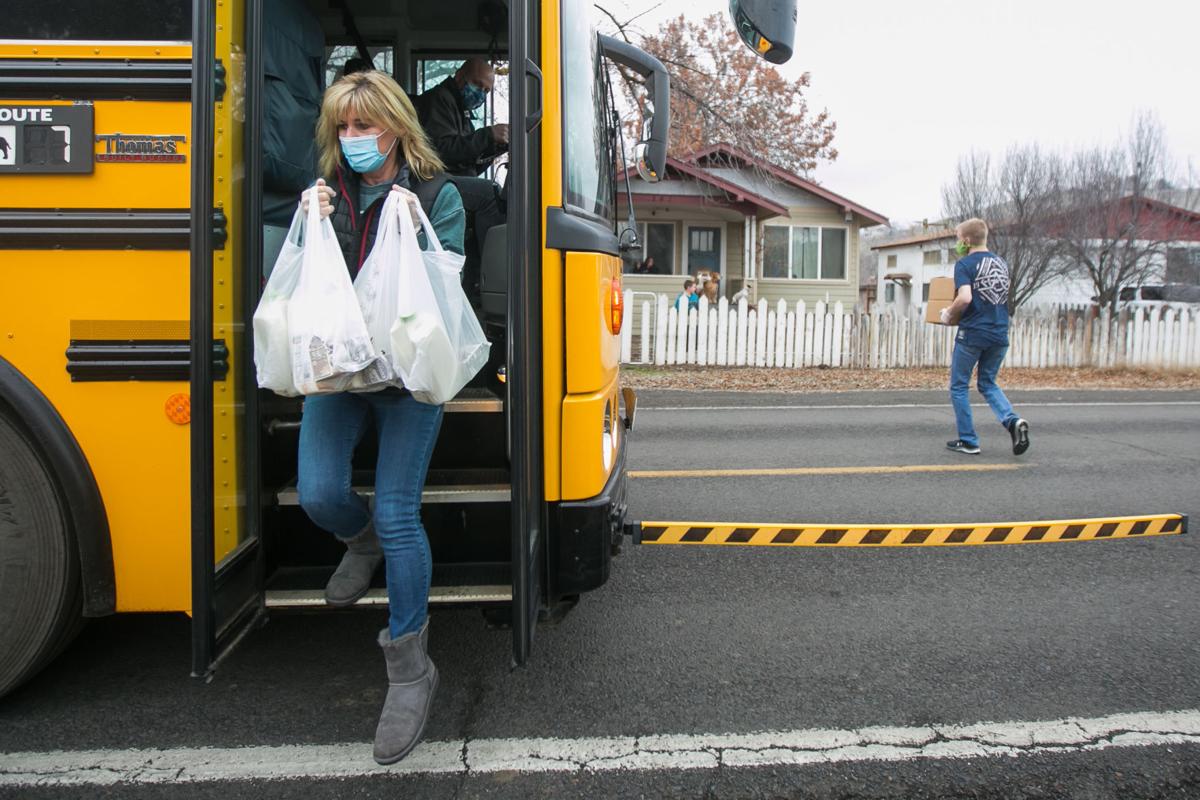 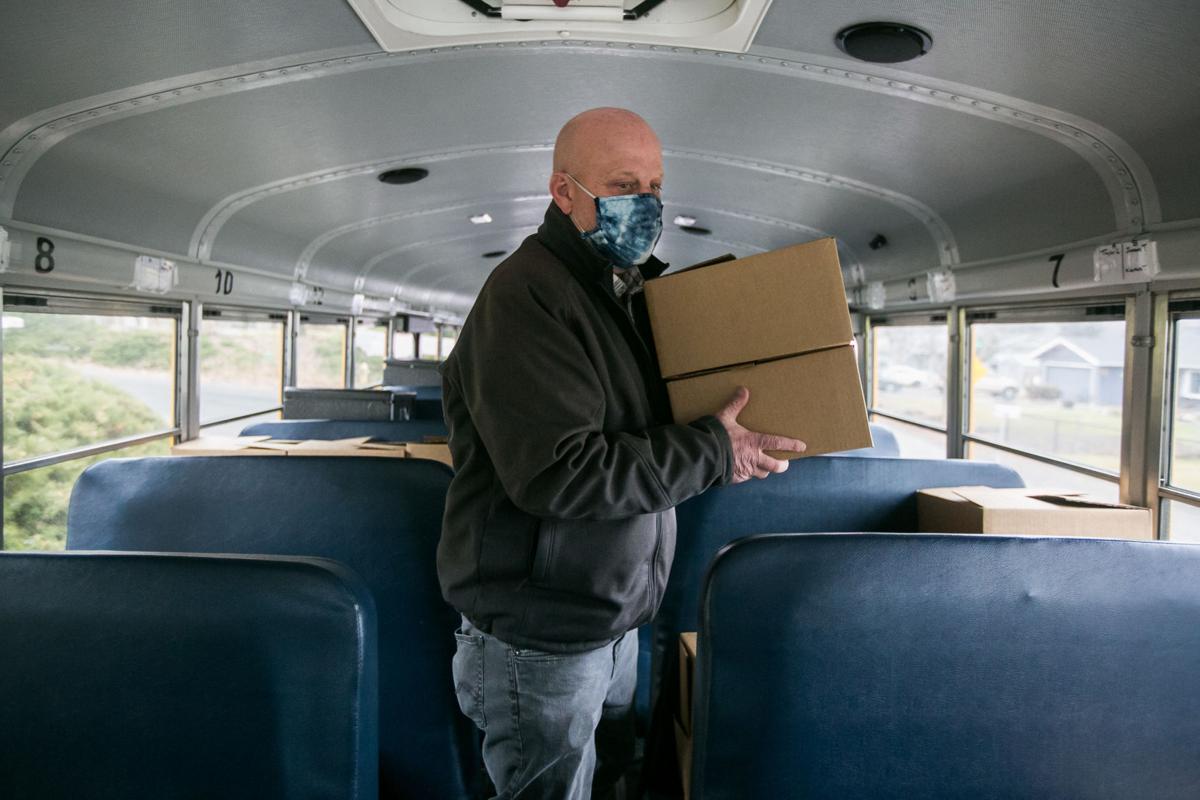 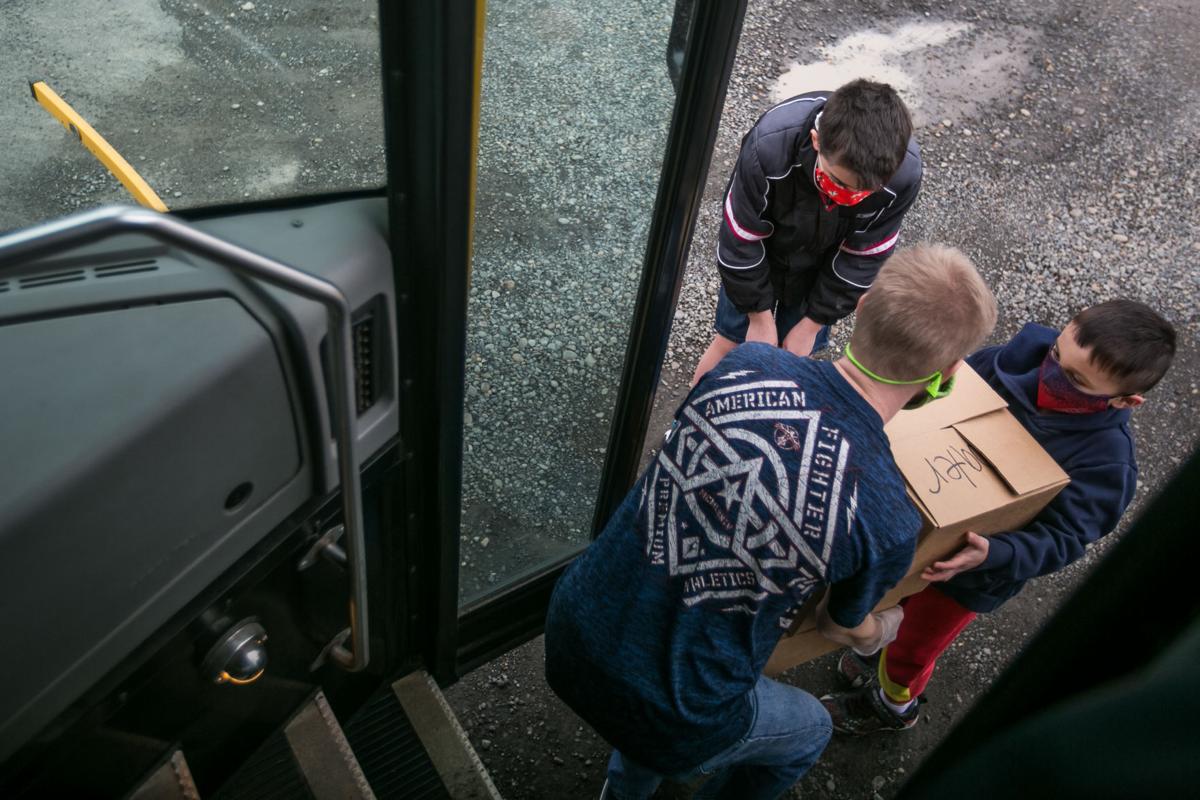 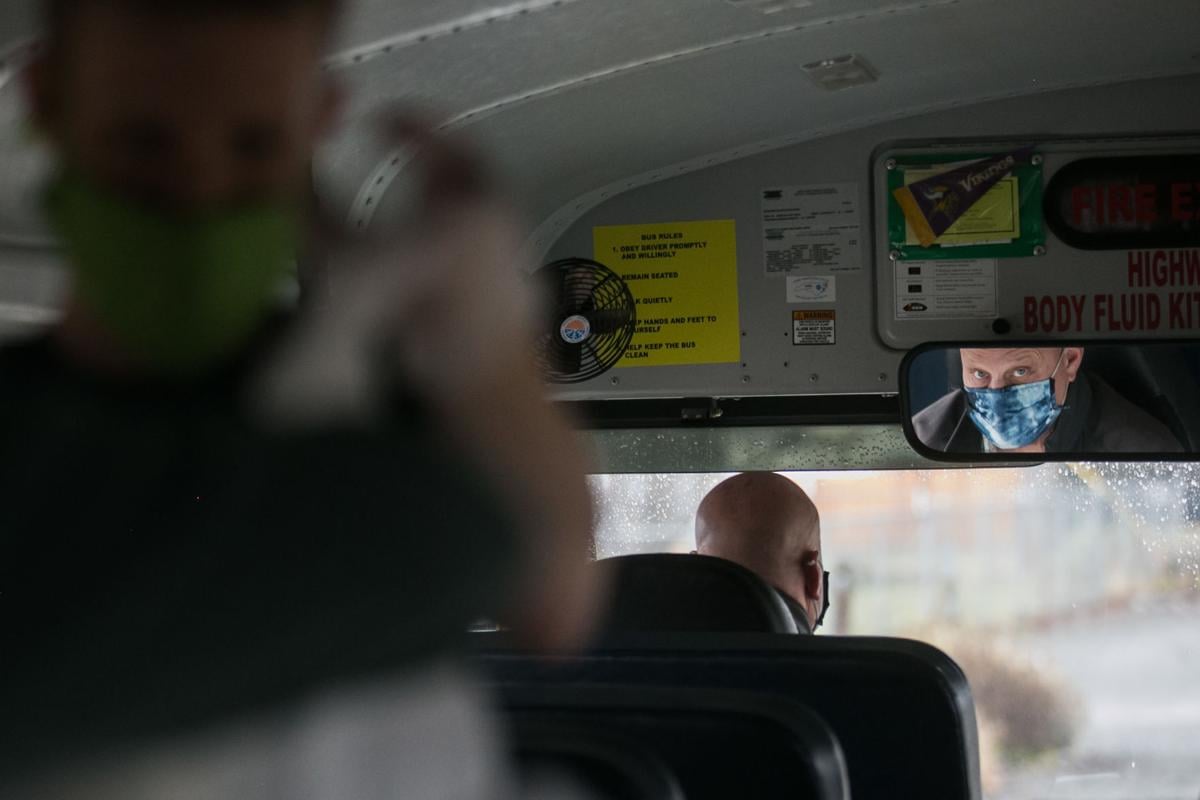 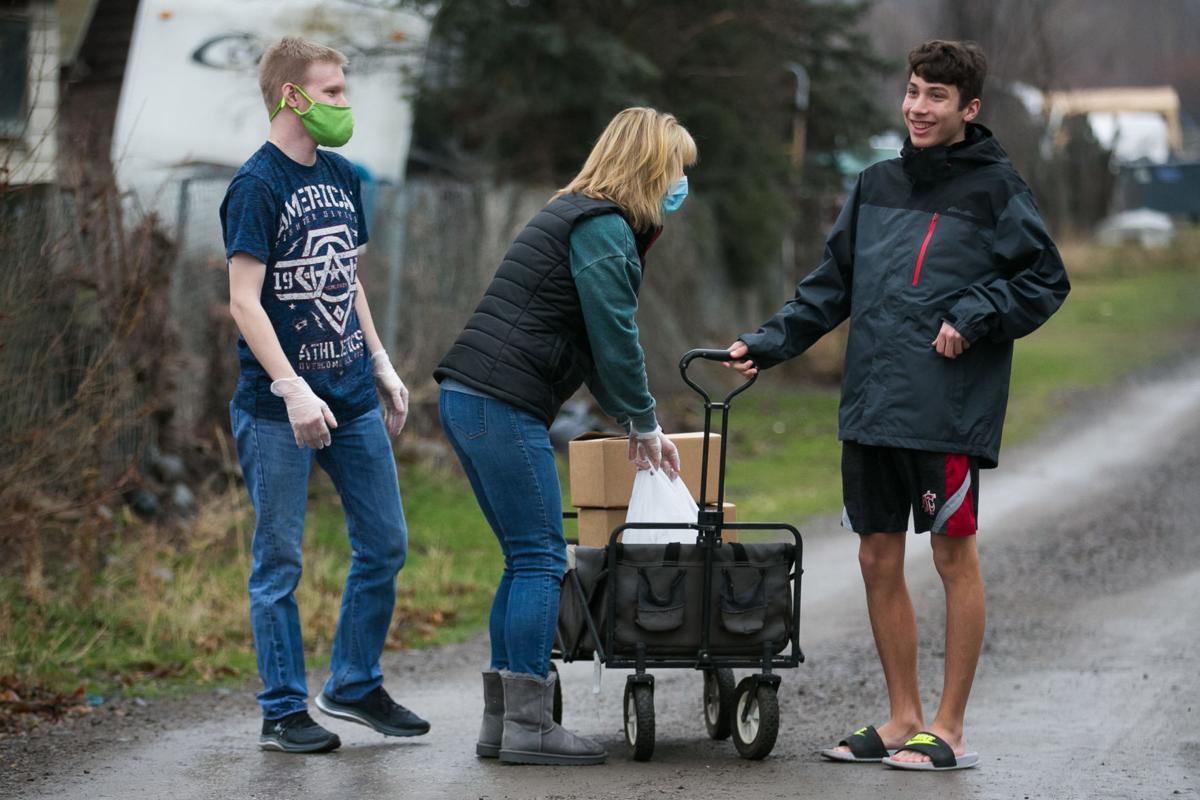 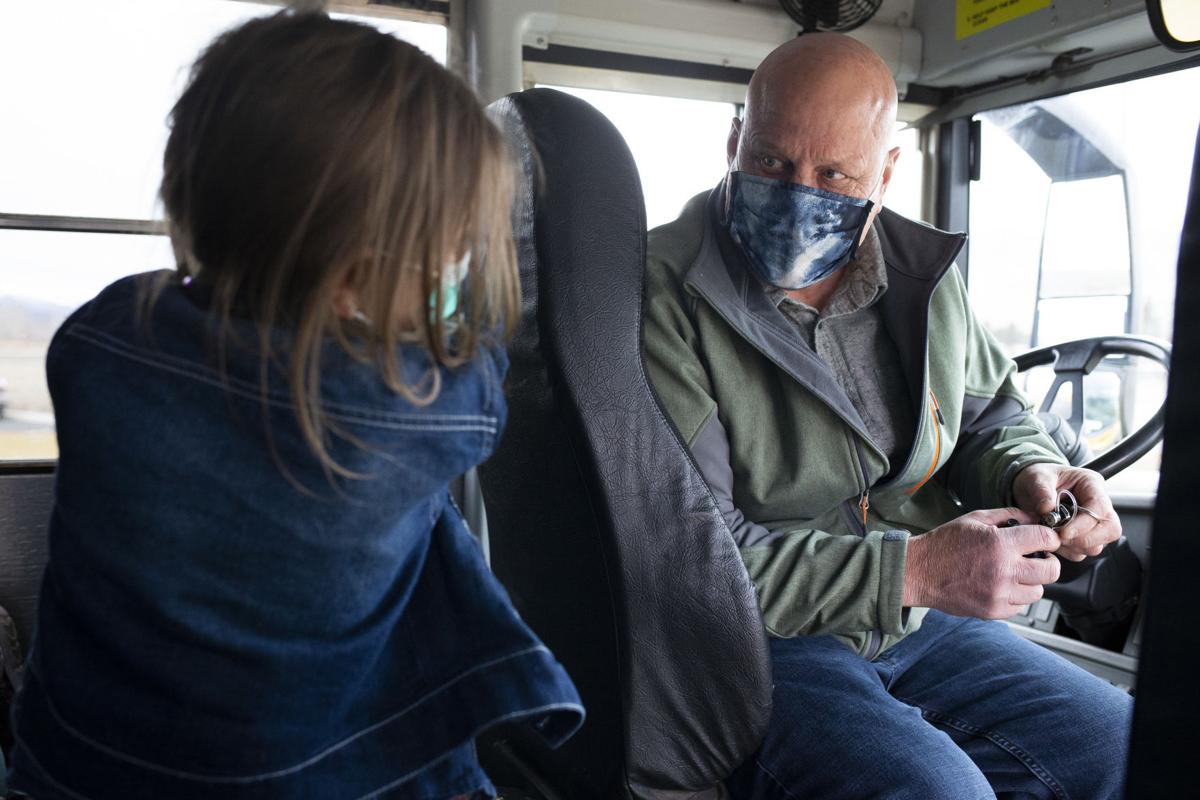 Bus driver Ron Cookson talks to a Naches Valley Elementary School student while waiting for others to board the bus on Thursday, Jan. 7, 2021 in Naches, Wash. 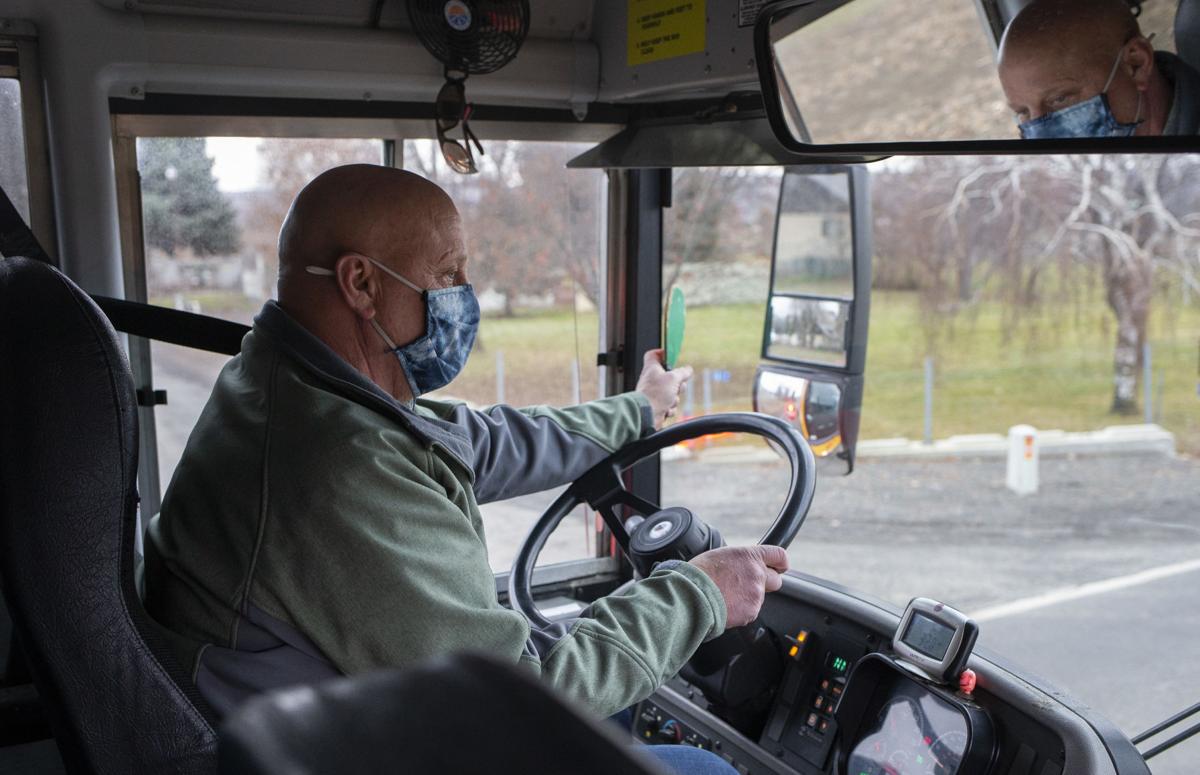 Bus driver Ron Cookson signals to kids that it's safe to cross the street on Thursday, Jan. 7, 2021 in Naches, Wash.

Bus driver Ron Cookson talks to a Naches Valley Elementary School student while waiting for others to board the bus on Thursday, Jan. 7, 2021 in Naches, Wash.

Bus driver Ron Cookson signals to kids that it's safe to cross the street on Thursday, Jan. 7, 2021 in Naches, Wash.

Drivers were among the employees local districts said they hoped to keep “whole” amid an indefinite period of remote learning. They’re an important group to maintain, given that bus driver shortages in ordinary times often cause disruptions.

Would drivers keep working, or would they be furloughed or dismissed?

Local district officials shared how they approached this question early on in the pandemic and what that looks like now, as some schools have begun to reintroduce students to campus.

Some drivers are back in their usual roles. But districts worry that, without legislative assistance, their transportation budgets will be sliced.

Just over a year ago, all 15 school districts in Yakima County had active bus driver job listings. Of the districts, all but two said a shortage of drivers led to disruptions in school or transportation.

Some districts had job postings with no applicants for eight years and no available substitutes. They pulled school employees from other positions to help cover routes or delivered students to and from school late.

And while about 200 drivers across the county were transporting students to and from school each day, a pool of roughly 50 substitutes among the districts left the majority of their transportation departments in a pinch.

The local predicament was part of a national trend. A 2018 national survey by industry magazine School Bus Fleet showed that more than 90% of school districts said they didn’t have enough bus drivers.

When cases of COVID-19 began cropping up in Washington state and schools statewide were mandated to close in mid-March, these high-demand employees were suddenly on the bench.

Adjusting to the pandemic

The campus closures changed the need for bus drivers’ regular work. Local districts said at the time that they were set on keeping their employees “whole,” finding work for them and preventing lay-offs.

“Districts will have to get creative in the kinds of work they have their employees do,” Kevin Chase — superintendent of Educational Service District 105, an agency that provides support for regional school districts — said at the time.

In many cases, this meant drivers were asked to do online professional development training during initial closures. Then, when student meals and work packets needed to be distributed, bus drivers delivered the supplies. In areas with poor access to the internet or large populations without home connections, buses with WiFi hot-spots were dispatched to get students online.

When the new school year came around there was a predicament: Transportation funding is based on the number of students bused. With all public schools in Yakima County starting the school year remotely, like much of the state, that was a concern for transportation departments.

In late August, Gov. Jay Inslee made a proclamation that allowed school transportation funds to cover the cost of delivering learning materials, meals, technology or student transportation. This gave districts the funding to pay for drivers as needed — although many would still need to furlough or lay off employees based on how much work they had. The order remains in effect until it or the governor’s emergency order end or are rescinded. But it doesn’t guarantee a certain level of transportation funding for the year, which would require legislative action this session.

In the Yakima School District, the largest in the county by far with over 15,000 students, the majority of the district’s drivers have participated in a job share program, working part-time in food services, or doing custodial or maintenance work, according to the district. One was assigned to the district’s mail room.

Margie Swallow was among those working in food services packaging meals for students. She was working about 3.5 hours a week, which she said was the minimum to keep her benefits.

“It’s not an easy situation, but it’s better than nothing,” she said. “It gets us out of the house; gets us working a bit.”

As high-needs students from special education students to teen parents were gradually reintroduced to Yakima campuses for in-person learning, the district re-established some of its bus routes to transport them. This has allowed 19 drivers to get back on routes, as well as nine drivers who work as health screeners on them.

For Swallow, this shift back to driving means she’ll get closer to 4.5 hours a week — a slight increase. Any bit helps, she said, since the unemployment she gets to buffer the loss of hours doesn’t compensate for her normal 40-hour work week.

In spite of the challenges, Yakima School District has maintained 50 contracted drivers — down slightly from the 54 reported in December 2019.

Nearby, the West Valley School District went from a pre-pandemic bus staff of 35 to 30 staff as of early January. District officials said a few drivers retired or chose to look for other jobs while drivers were put on furlough, keeping their title and benefits but otherwise relying on unemployment. At times, the district was able to pay drivers for training required by the state.

The district returned elementary and middle school students to in-person learning in the fall, as well as small groups of high-needs high school students. This allowed the district to resume one bus run district-wide. (When all students are attending, there are two runs twice a day across the district to pick up and drop off older and younger students.) Routes have been condensed and driver hours are slightly reduced without extra-curricular events like sports.

In Toppenish, bus drivers also began returning to routes when students transitioned back into classrooms in the fall. But when cases began rising ahead of the Thanksgiving holiday, the district moved back to remote learning, said Superintendent John Cerna. Now, bus drivers are staying busy by driving WiFi hot-spots to rural areas where the district knows households lack internet connections.

Across the Valley in Naches, students are back on campus in a hybrid cycle. That means on Mondays, students are learning from home and bus drivers are out delivering packages of meals for the week. On Tuesday through Friday, they’re picking up cohorts of students and driving them to and from school, said Naches Valley Superintendent Robert Bowman.

Between substitutes and regular drivers, he said they have 15 drivers running the routes, just enough to get by in the large geographic district. But it’s a tight squeeze.

“Let’s say COVID goes through our transportation (team),” Bowman said. “It would shut us down.”

Bowman is worried that without legislative help, the district, like others around the state, will lose significant funding. He estimates that if funding continues to be based on students bused, the district could lose more than 60% of its transportation funds, eliminating jobs it can’t afford to lose.

“It’s a difficult position to be in,” he said. “You hate to have all your cards in the Legislature’s hands. But that’s where we’re at right now.”

State Rep. Jeremie Dufault, R-Selah, said he believes there will be movement in Legislature to continue a “stop-gap” fix. This would continue to provide funding to schools during the pandemic for transportation, to be used for things like distributing meals or technology in addition to busing students. But he said in the coming years, a systematic fix is needed. He said school transportation funding should take into account the length of a bus route as well as the number of students bused. That way, large geographic districts would not be disadvantaged financially for picking up small numbers of students along far-stretching routes — an aspect of transportation in large geographic districts like Naches Valley and Mt. Adams.

That fix, Dufault said, likely won’t be addressed during this pandemic-era session.