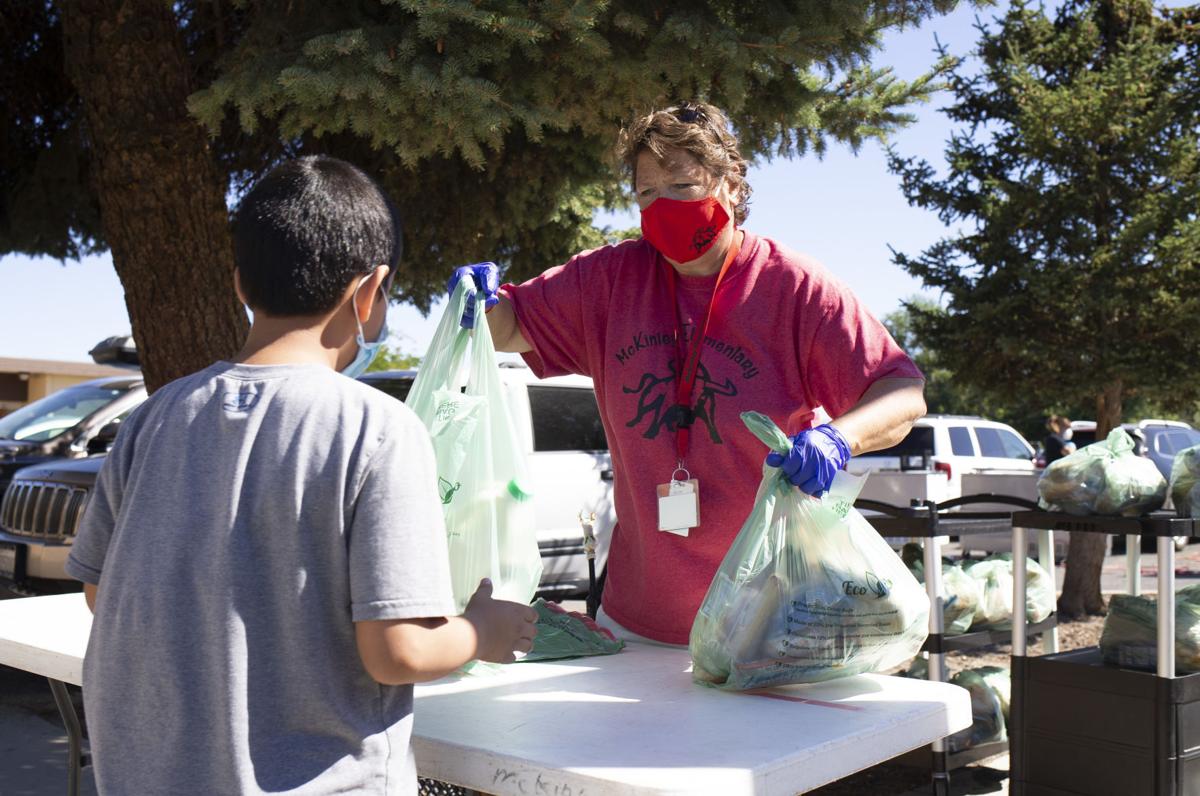 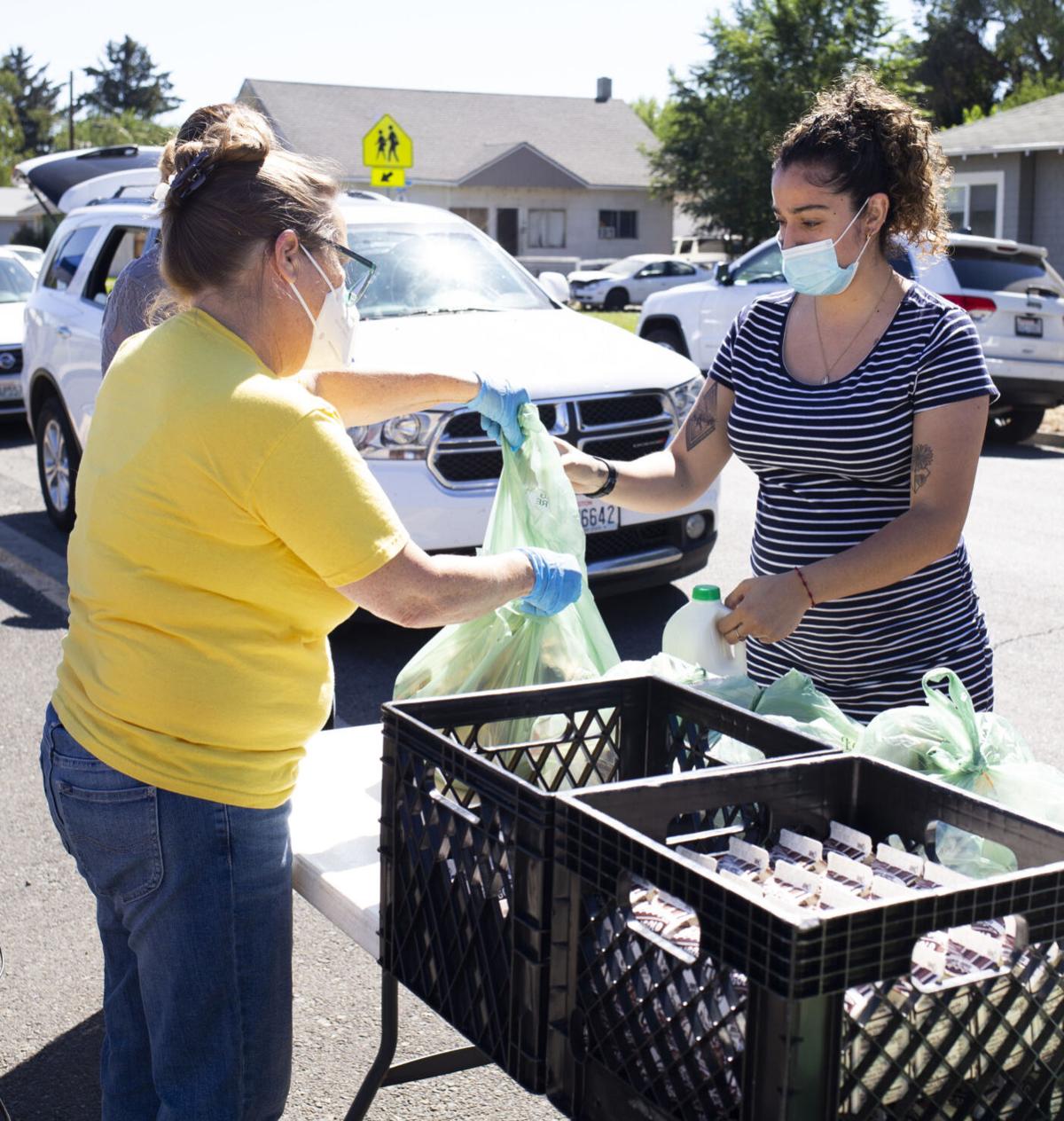 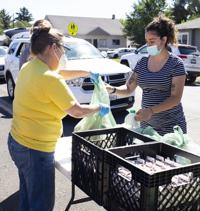 Gabriela Heredia, right, picks up milk and meals during meal distribution on the first day of school for Yakima School District at McKinley Elementary School on Wednesday, Aug. 26, 2020, in Yakima, Wash. 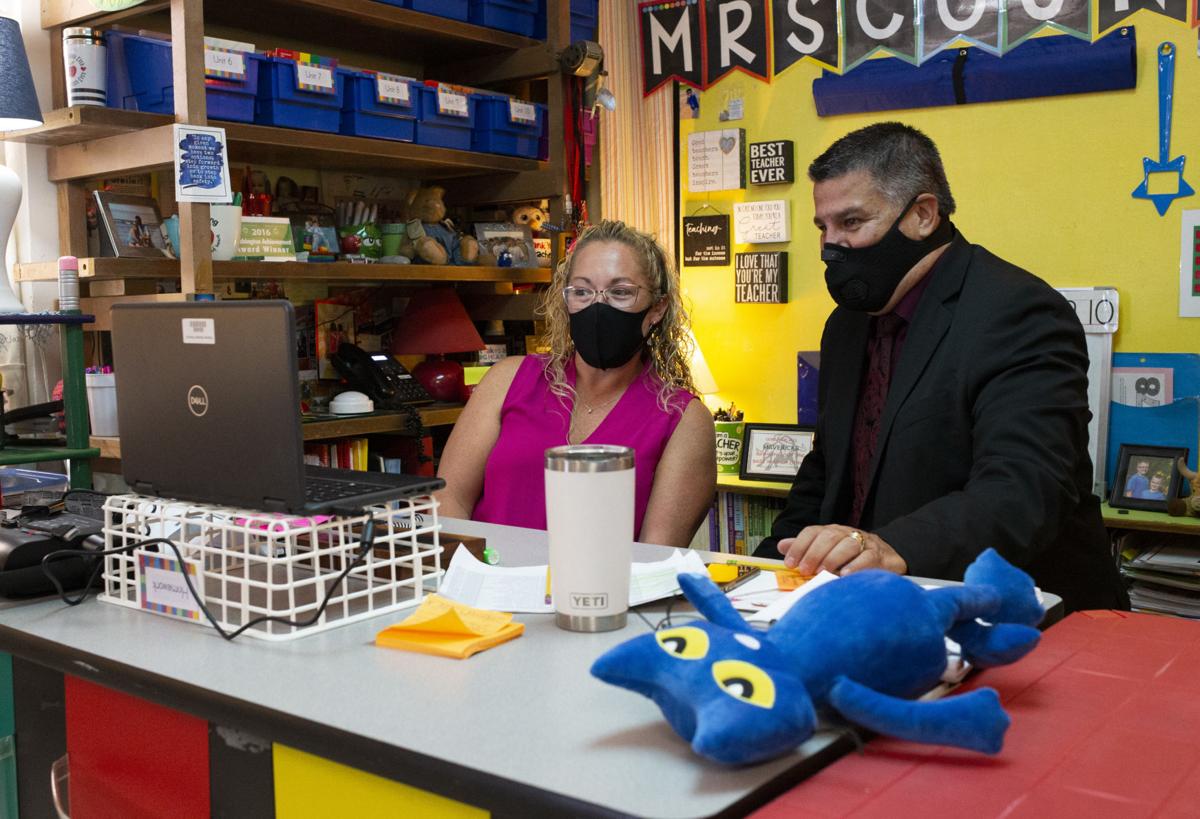 Yakima School District superintendent Trevor Greene, right, says hello to a kindergarten student during an individual conference with their teacher Sara Coyner, left, during the first day of school at McKinley Elementary School on Wednesday, Aug. 26, 2020, in Yakima, Wash. 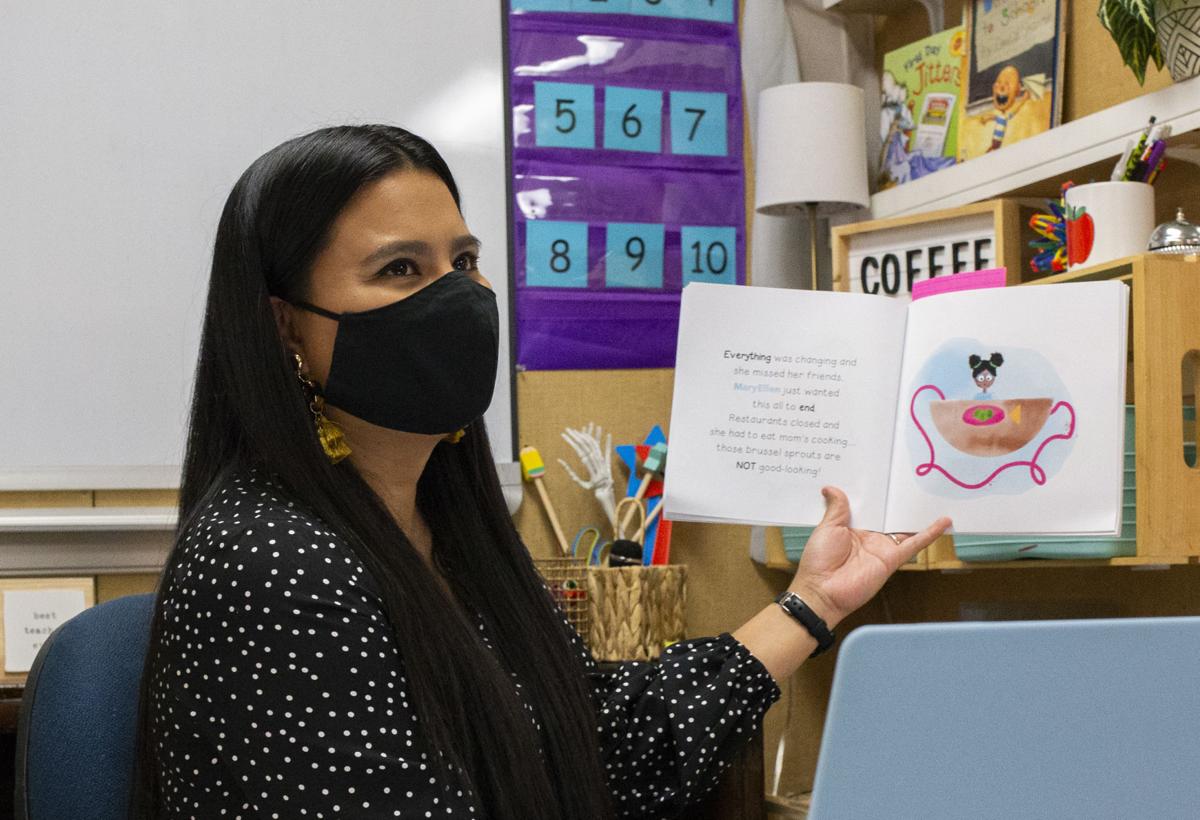 Cindy Bañuelos, kindergarten teacher, shows a book she started reading to her students called "When Virona the Corona Came to Town" on the first day of school at McKinley Elementary School on Wednesday, Aug. 26, 2020, in Yakima, Wash. 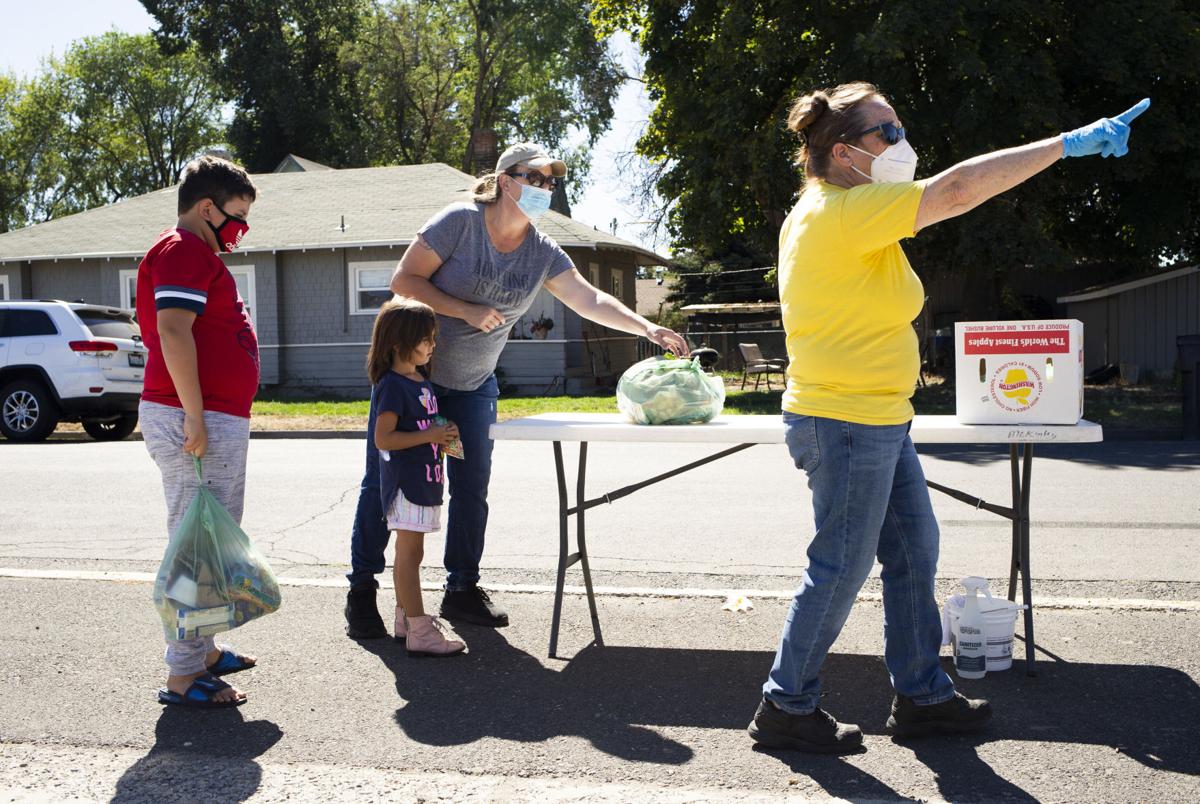 Gabriela Heredia, right, picks up milk and meals during meal distribution on the first day of school for Yakima School District at McKinley Elementary School on Wednesday, Aug. 26, 2020, in Yakima, Wash.

Yakima School District superintendent Trevor Greene, right, says hello to a kindergarten student during an individual conference with their teacher Sara Coyner, left, during the first day of school at McKinley Elementary School on Wednesday, Aug. 26, 2020, in Yakima, Wash.

Cindy Bañuelos, kindergarten teacher, shows a book she started reading to her students called "When Virona the Corona Came to Town" on the first day of school at McKinley Elementary School on Wednesday, Aug. 26, 2020, in Yakima, Wash.

Campuses across the Yakima School District were quiet Wednesday morning — at least compared to the first day of school in any other year.

Some teachers were in elementary buildings as early as 6:30 a.m. preparing to welcome their students to class for the first time, said Superintendent Trevor Greene. The vast majority chose to teach from their campus classroom, he said. But this year, all 16,000 K-12 students were welcomed via video call.

“It was sad it wasn’t the usual, which is opening that door and seeing them lined up with parents in tears and kids excited to say, ‘Bye, mom,’” said Cindy Bañuelos, a kindergarten teacher at McKinley Elementary School. “But once we went live, that enthusiasm — that feeling of excitement was there. So I might have an empty classroom, but we were all here in spirit.”

Earlier this month, Yakima School District led county districts in making the announcement that school would start off remotely this year — a call that was made before health officials issued recommendations for school reopening public.

That same day, Gov. Jay Inslee recommended that students in high-risk counties — or those with more than 75 newly confirmed COVID-19 cases per 100,000 people over a two-week period — not return to school buildings. The Yakima Health District also recommended remote learning.

All 14 other Yakima County public districts announced they too would be going remote. Local private schools have chosen to test the water with in-person learning, following strict health and safety measures and with options for remote learning in some cases.

While Wednesday was the first day of school for the county’s largest district, a handful of schools have already resumed while other won’t have their first day until well into September.

This year, the Yakima School District ramped up what remote learning entails, compared to the spring.

The district has transitioned to a 1-1 model, meaning every student has their own device to learn from. No more paper learning packets. It is also rolling out a broadband effort that will expand the protected district WiFi connections to reach everywhere within district limits within the next few months. And whatever is taught in a normal classroom setting should be able to translate to remote learning, district officials said.

“I want people to realize you don’t change what happens online. You adapt,” said Arnie Lewis, the district’s new director of distance and accelerated learning.

Lewis has been working with staff to train them in the district’s core learning platforms. He has also uploaded training videos and conversation platforms to the district website for students and families — in English and Spanish — to learn how to navigate the platforms better.

The first days of school in classrooms throughout the district will focus on getting students comfortable with learning platforms, checking in to see how students are doing and building relationships, said Lewis.

In Bañuelos’ classroom, kindergarten students started the day by talking about their feelings. Then she read them a picture book: “When Virona the Corona Came to Town.” She said it was a friendly way to explain to them why they can’t be in class in person right now.

Brad Schultz, a third grade teacher at Nob Hill Elementary, chose to teach from home. He shared a slideshow with videos introducing himself and did several activities to help get to know his students. His students’ first assignment of the year is to navigate through Google Classroom to a link where they can make their own introduction video, which will be shared in class Thursday so students can get to know their classmates.

Both teachers said they plan to ease into academic topics. Schultz calls it building up academic stamina. He said by the fourth week of school, his students should be in the swing of things and learning content across all subjects.

Teachers reported some hit-and-miss attendance. That’s something that will be tracked this year, unlike the spring.

Schultz had 20 of 24 students join the class video call Wednesday morning and expected two more to be present Thursday once they picked up district-issued laptops.

Bañuelos had 14 out of 23 students. She planned to call each absent student’s parent to see if technology or time schedules might have been a barrier and if she could help.

The first day of school didn’t go off without glitches. Some staff struggled to adjust to a new ID system to recognize students picking up bulk meal packages. And internet connectivity issues on some campuses created extra stress for teachers as they prepared to log on with students. Some who had come to campus chose to teach from home as a result.

“Those first-day glitches,” said Greene. “When you have a system that serves 16,000 students, there’s going to be a hiccup now and then, and that was a mild one.”

While learning is starting remotely, district administrators speak optimistically of a later pivot to in-person learning if health conditions improve. They expect online learning platforms will still be used when this happens.

But students also have the option to learn fully online through a platform with pre-planned curriculum and outside teaching staff. They commit by semester or school year. Across grades 6 through 12, roughly 160 students were enrolled as of Wednesday. That’s more than double last year’s enrollment. It is also newly available to K-5 students, with 101 enrolled as of Tuesday night.

In Yakima County, 10 out of 15 public school districts will have a device to send home with every student by the end of fall. Before the pandemic, just five school districts were able to provide that service to all students.