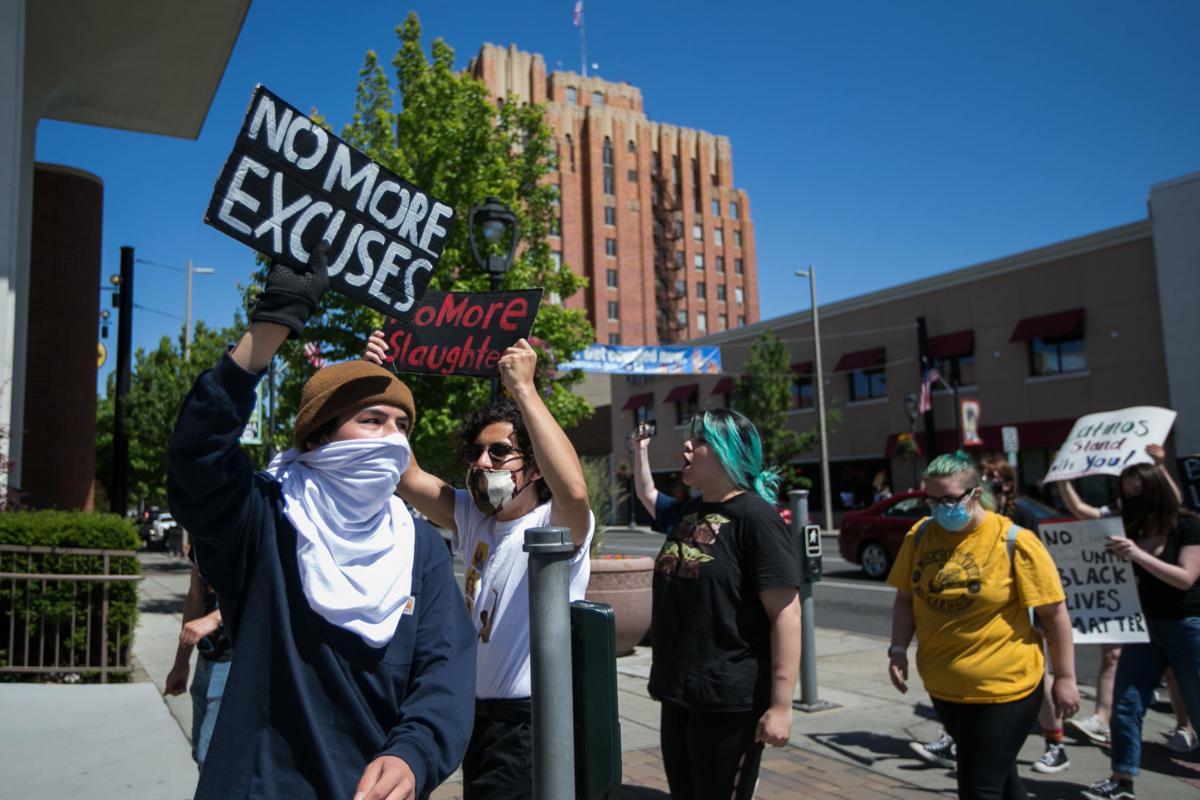 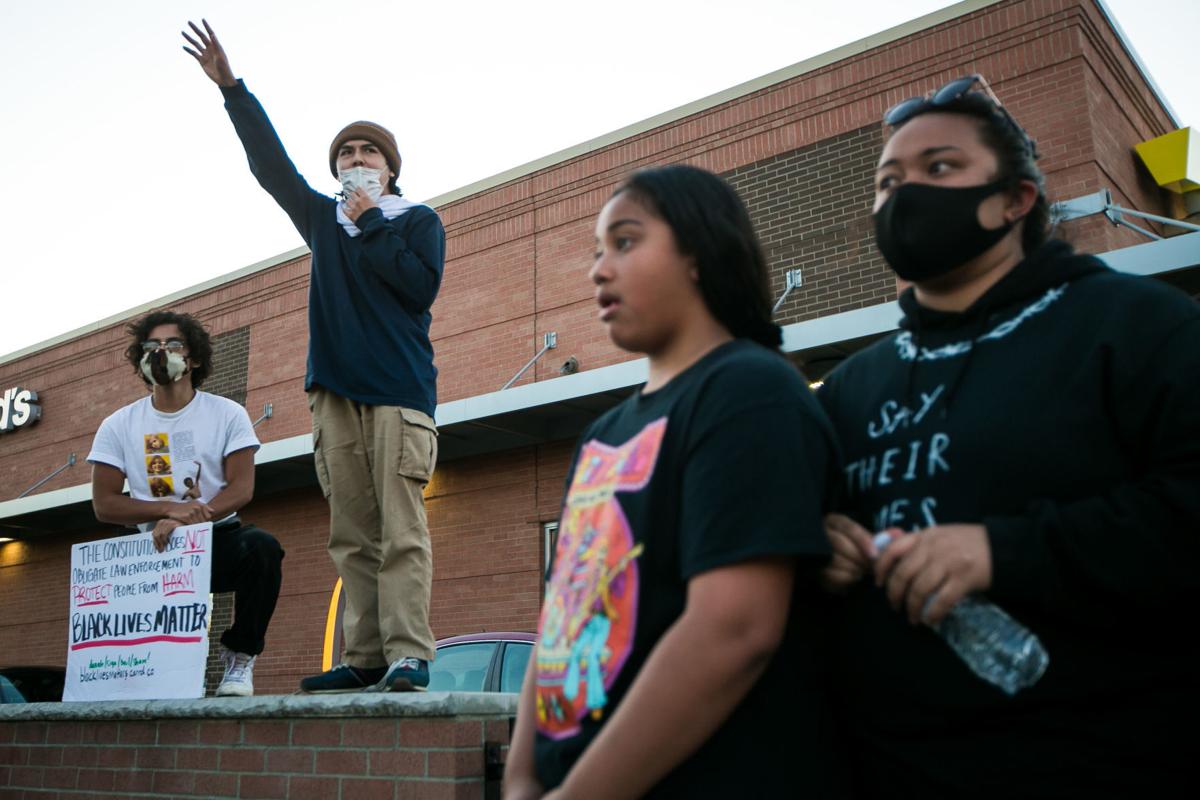 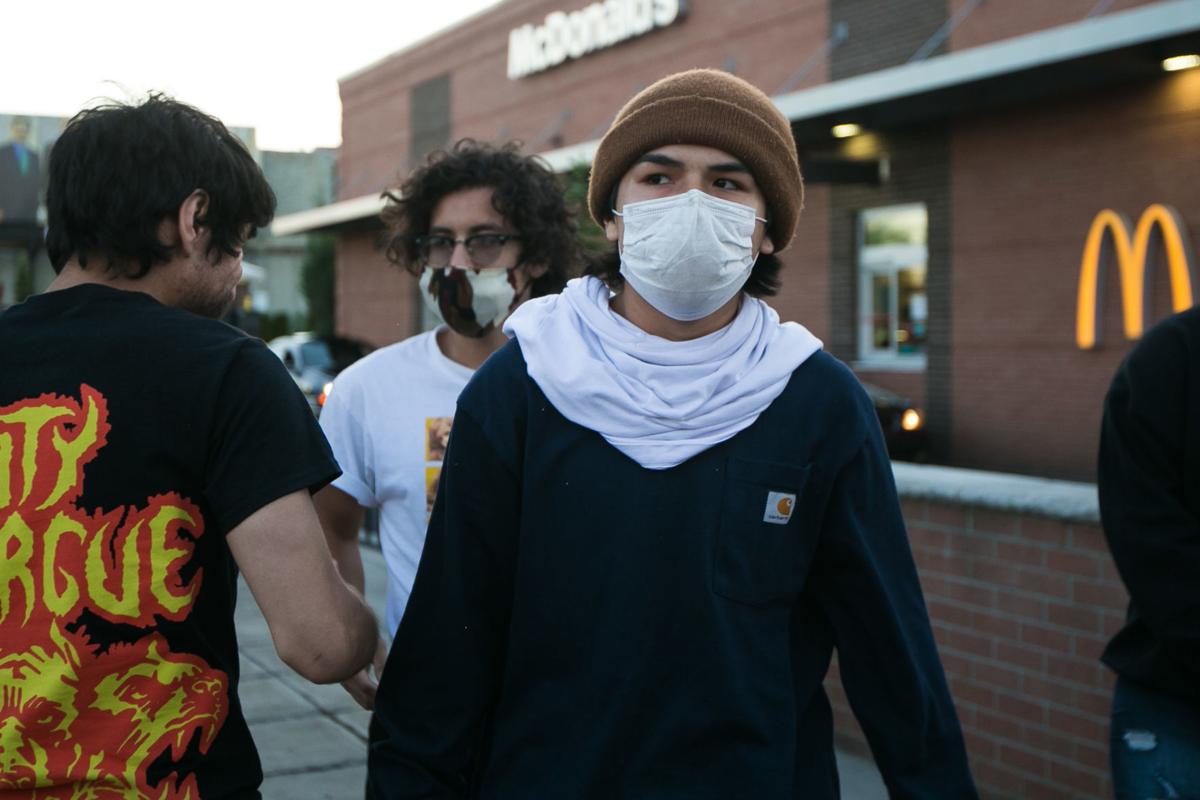 FILE—Eisenhower High’s Tony Visaya is pictured on Monday, June 1, 2020, at a Justice for George Floyd rally, a protest he organized with Axel Reyes-Morales, in downtown Yakima, Wash. 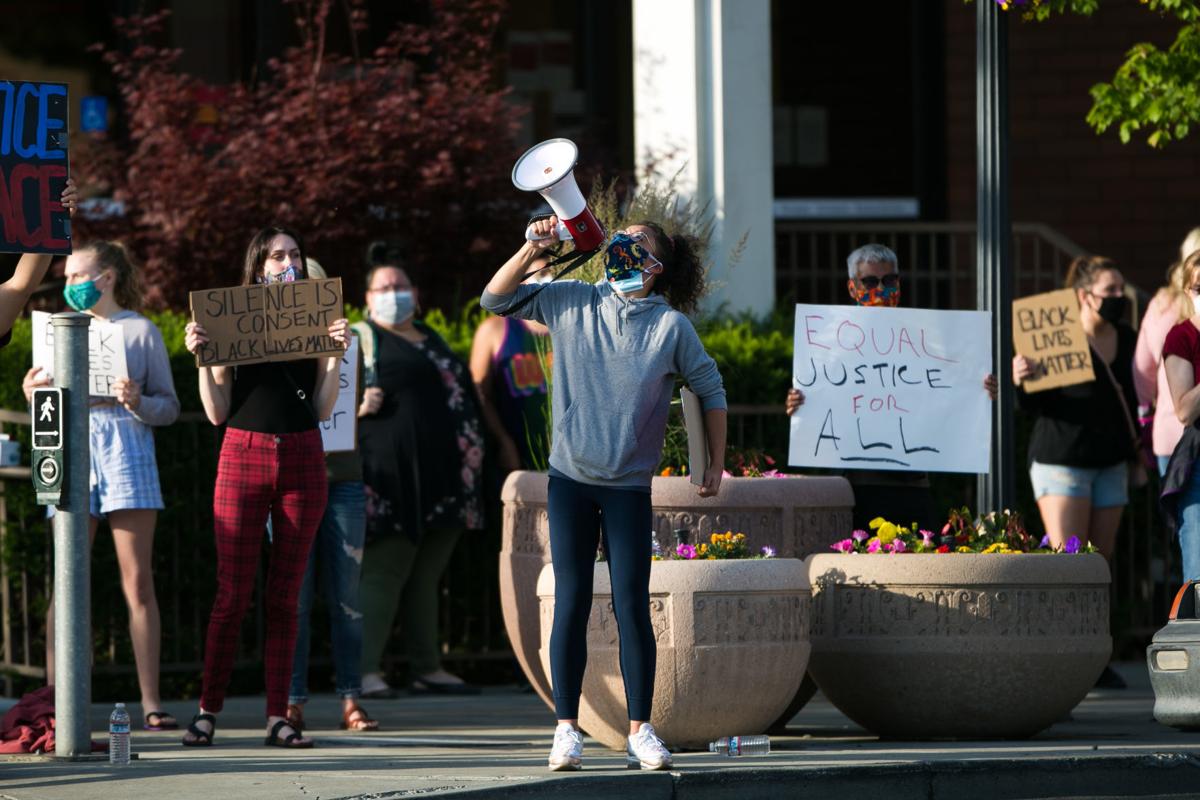 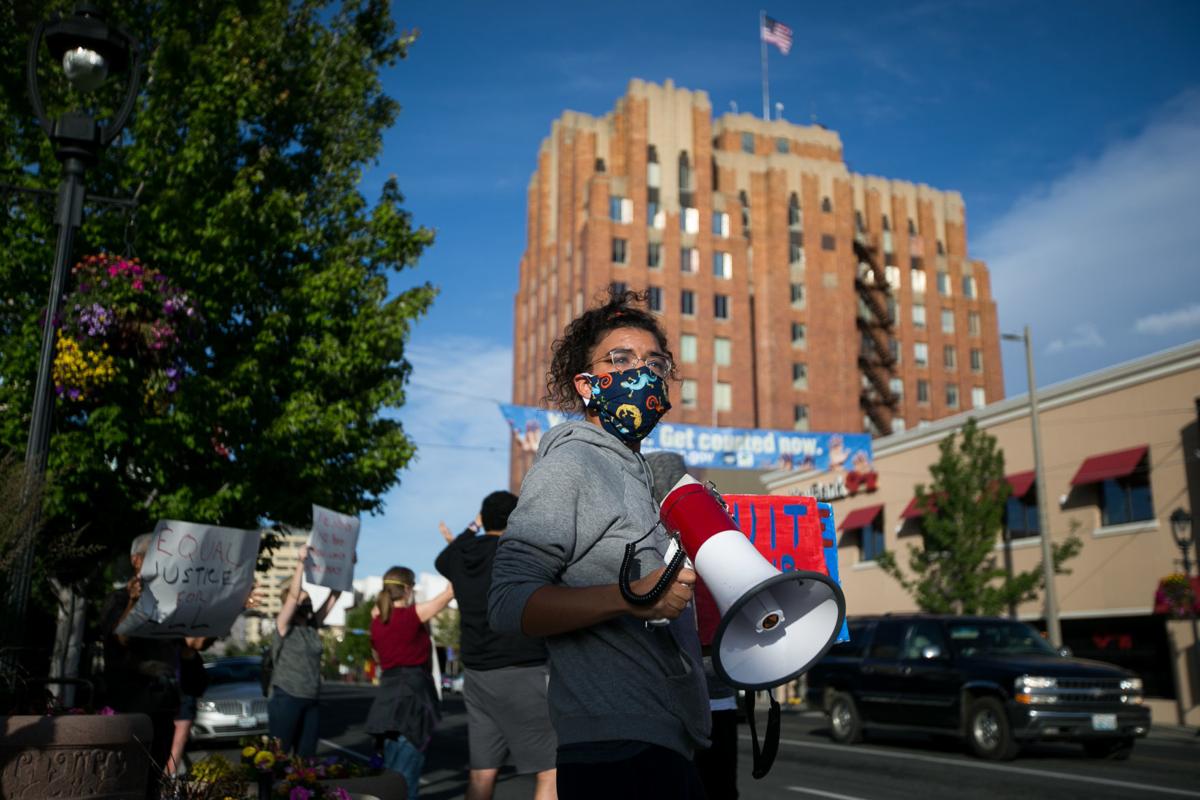 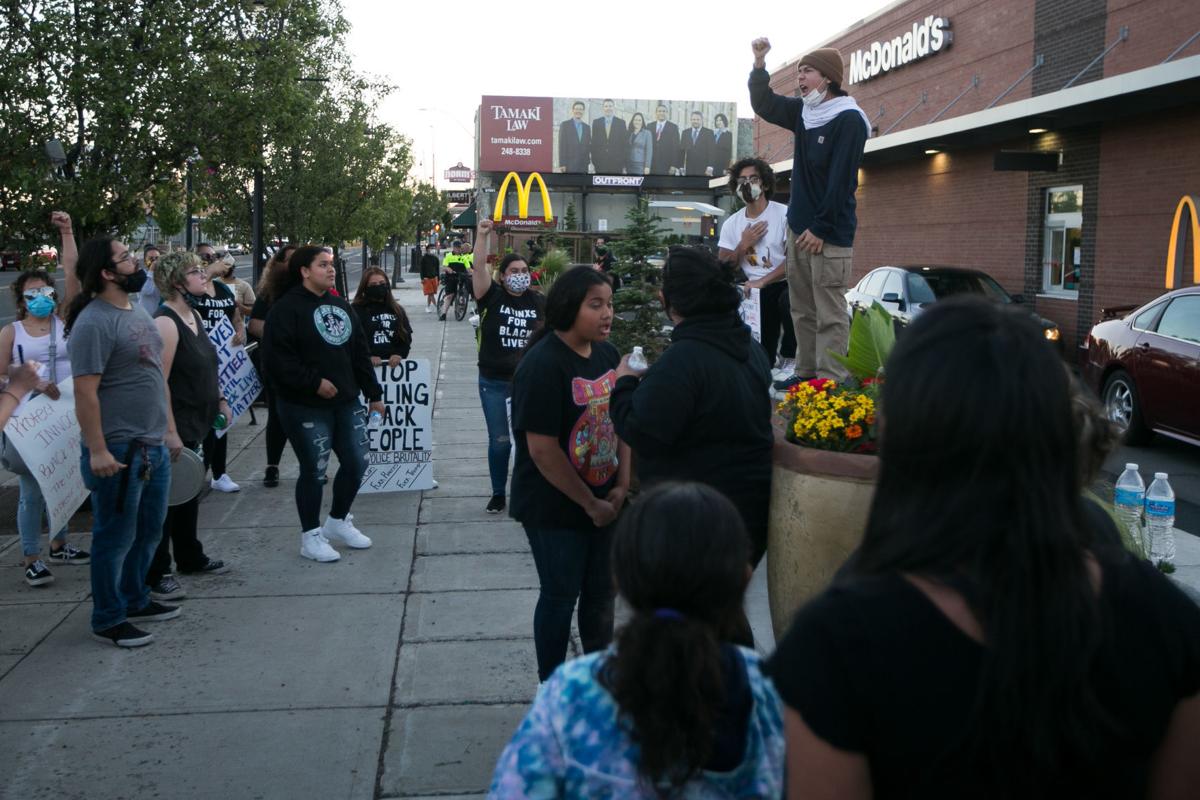 FILE—Tony Visaya, right, gives praise to the crowd for leading a peaceful protest in support of Black Lives Matter on Monday, June 1, 2020, in downtown Yakima, Wash.

FILE—Eisenhower High’s Tony Visaya is pictured on Monday, June 1, 2020, at a Justice for George Floyd rally, a protest he organized with Axel Reyes-Morales, in downtown Yakima, Wash.

FILE—Tony Visaya, right, gives praise to the crowd for leading a peaceful protest in support of Black Lives Matter on Monday, June 1, 2020, in downtown Yakima, Wash.

The 18-year-olds said they organized the march after participating in similar rallies in the days prior. They felt a need to stand up against racism and police brutality that had impacted fellow residents of Yakima and the black community nationally.

By evening, roughly 150 people — predominantly youths — followed their lead, passionately calling for justice and an end to police brutality as they made their way down Yakima’s streets. Some, like Washington Middle School student Anikay Lefthand, were as young as 13.

The demonstrations amid a global pandemic and stay-at-home orders were spurred by the death of George Floyd at the hands of police in Minneapolis on May 25. They have occurred almost daily for more than a week in Yakima, with new organizers stepping up each day.

Student calls for systemic change have led to conversations in the Yakima School District about how to eliminate racism in its classrooms and school environment.

“I affirm to you my commitment that, as district personnel, we will extend beyond the written acknowledgment of national atrocities and lead to guarantee humanity, dignity and equal rights of every student, parent and staff member in the elimination of prejudice, bigotry and discrimination from the educational process,” Greene wrote.

In an interview, Greene said he and fellow administrators were deeply impacted by a series of recent incidents of racism and violence against members of the black community throughout the U.S.

Leading up to Floyd’s death, for example, another instance was the murder of Ahmaud Arbery, a 25-year-old black man who was killed by armed white residents in a South Georgia neighborhood while jogging. It was two months before the perpetrators were arrested or charged.

“These conditions have augmented what we’ve known has existed for years,” Greene said: Racism disadvantages and endangers members of the black community and people of color. It’s something the local community can relate to, he said, which is demonstrated by groups gathering to protest after Floyd’s death.

Reflecting on the local calls for justice and an end to police brutality, Greene did not splice his words.

“Why can’t we just come out and say police brutality is wrong? It is wrong,” he said. “I have colleagues who have to teach their children what to do when they’re stopped by the police.”

Green got choked up at this thought. As a Native American who identifies as a person of color, Greene said he had experienced prejudice in his life. But his own children “pass for white,” he said. He doesn’t have to worry about them being victimized because of their skin color, he said. No parent should have to, he said. “We have to do better.”

He said these calls for justice don’t undercut the work of police who are doing good in their communities — including Yakima graduates who he said are now serving in the local police force.

Greene lauded the Yakima School District students and fellow youth who have been on the front lines of peaceful local Black Lives Matter demonstrations.

“We admire them for being in downtown Yakima protesting,” he said. “Saying that police brutality is wrong and is disproportionately against black people and people of color should not be something that takes away from the great things that are happening.”

These protests and calls for justice provide an opportunity for systemic improvement, including in the school setting, which serves as a launching platform of students into society. The protests offer lessons from students to their school administration, he said.

Since Floyd’s death last month, some districts across the U.S. have cut ties with local police departments, removing school resource officers from their schools.

Greene said Yakima School District is ready to have that conversation. He acknowledged that school resource officers would be part of a districtwide assessment of how the school system either perpetuates or eliminates prejudice, bigotry and discrimination.

“Just because you’re a police officer in a school does not inherently make you bad or good,” he said. “There are tremendous benefits in the way we can connect our law enforcement with students in a positive way, but there’s also tremendous potential for having a police department and police force in the school to perpetuate the same type of feelings and reinforce negative interactions that have occurred outside the school. … These are conversations we need to continue to have.”

He said the district also needed to create a way to get feedback from students on where the district was successful or failing as a system.

“You can’t really talk about inequity and changing the world … if we do not talk with students,” he said.

This comes after the school board approved an equity policy earlier this year. It commits the district to root out bigotry and prejudice.

Current events are a reminder this work needs to be a priority, he said. Acting on the policy should include providing culturally competent teaching and diversifying the workforce to be “more reflective of the ethnic and cultural composition of our student body,” said Greene.

Research suggests that students do better in school when their teachers are of the same race. A 2017 survey of more than 80,000 public school students found that students felt more cared for, more interested in their work and more confident in their teachers’ ability to communicate with them when they were of their race. They also said they put in more effort in school and had higher college goals.

Greene said the district needs to provide more equitable access to learning opportunities, such as by improving access to the internet or devices.

While the district recently announced it intends to provide computer devices for all of its 16,000 students, surveys in recent years showed as many as two-thirds of students do not have internet access at home, according to district officials.

“These are conversations we need to continue to have,” he said. He said he is committed to leading the district through positive change, not just acknowledging sadness over current events, which he called lip service.

“I feel that it’s critical at this time to not just make a statement, but to a large degree make a declaration and to put steps forward ... not because of what’s happening, but because it’s the right thing to do,” he said. “We are considering our entire system and the way that we either perpetuate or eliminate prejudice, bigotry, discrimination, and that’s going to require assessment throughout the (school) organization.”