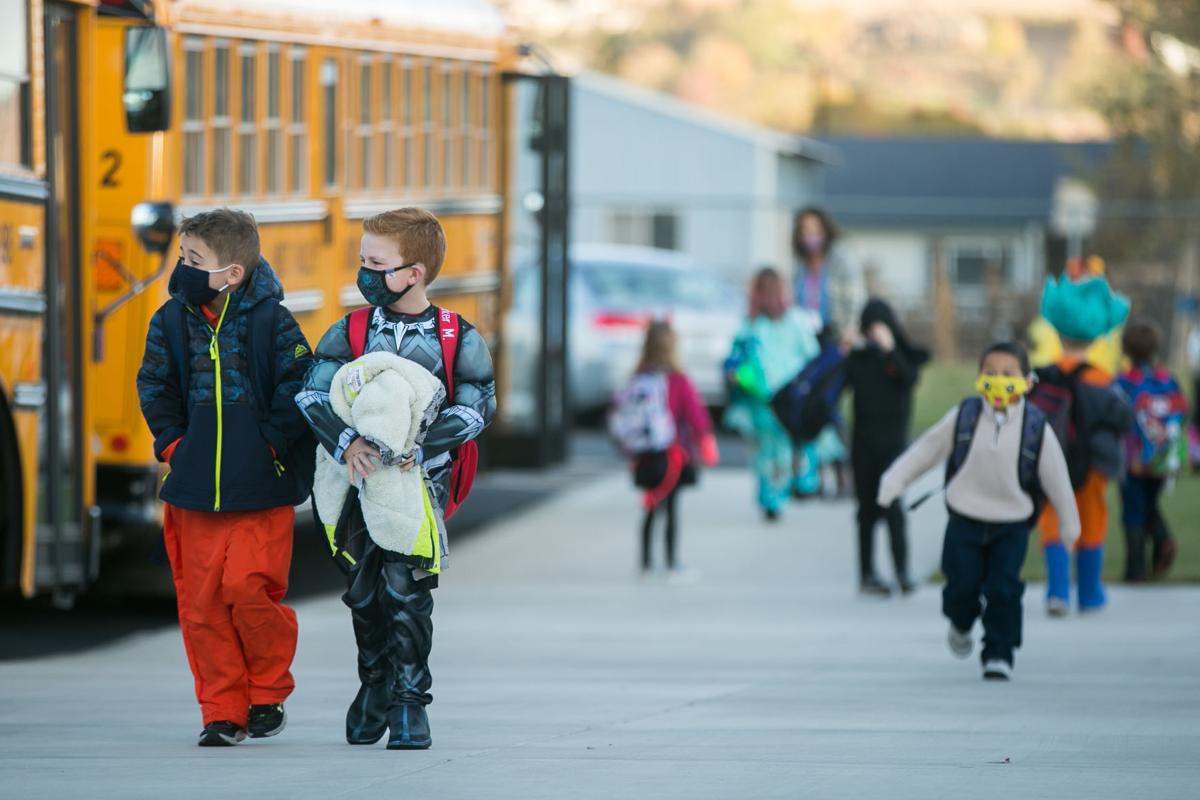 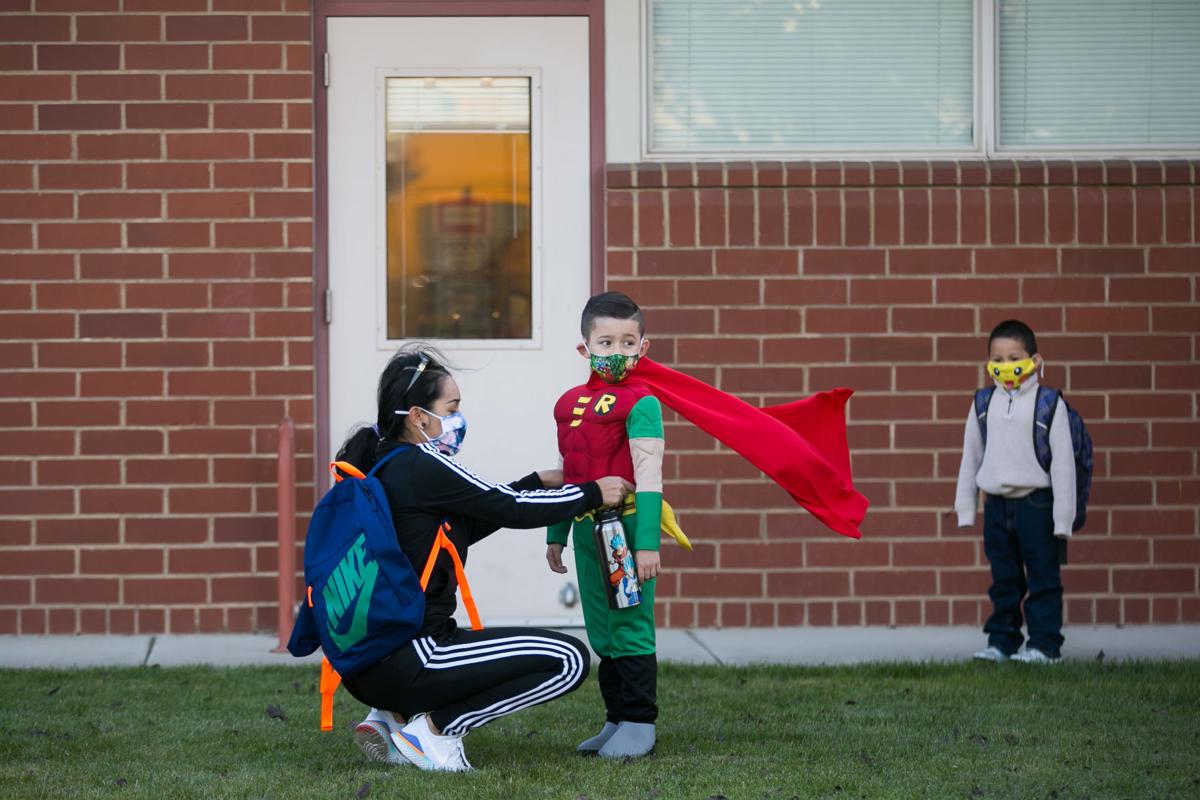 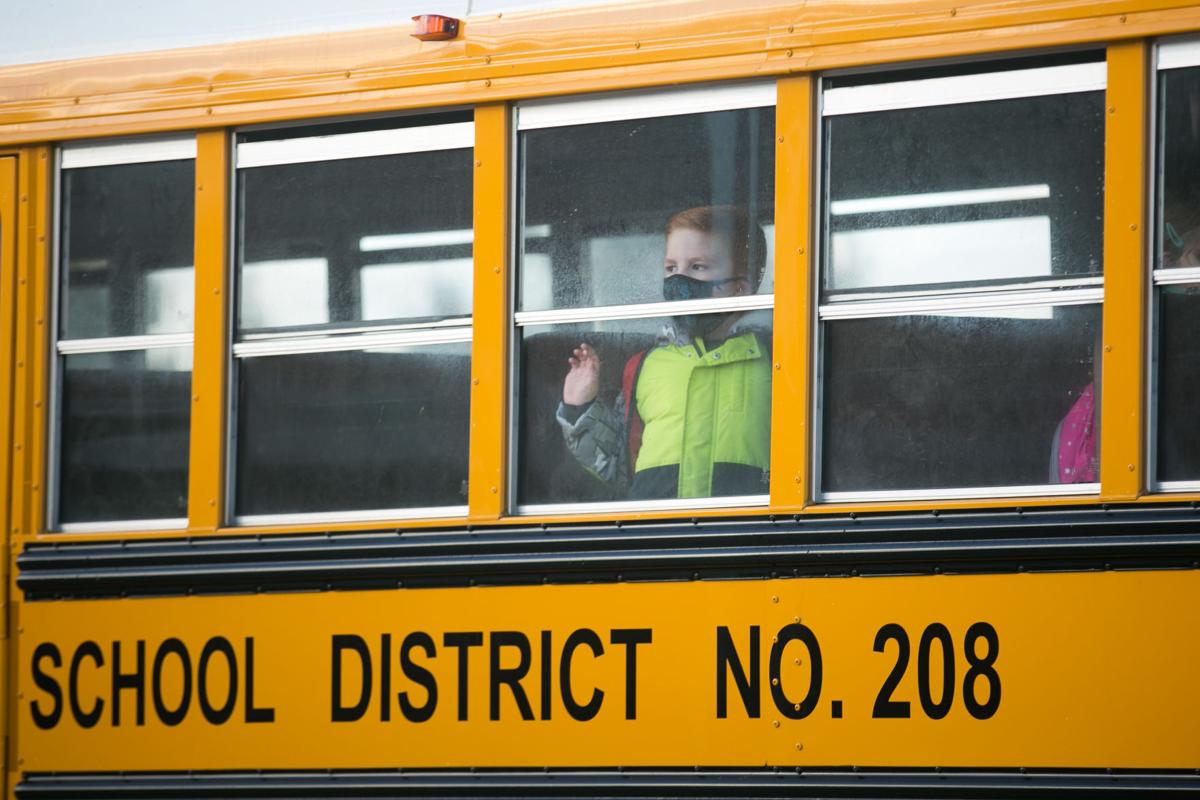 A student wears a face covering on a school bus as students return to school for in-person learning Friday, Oct. 30, 2020, at Cottonwood Elementary School in Yakima, Wash. 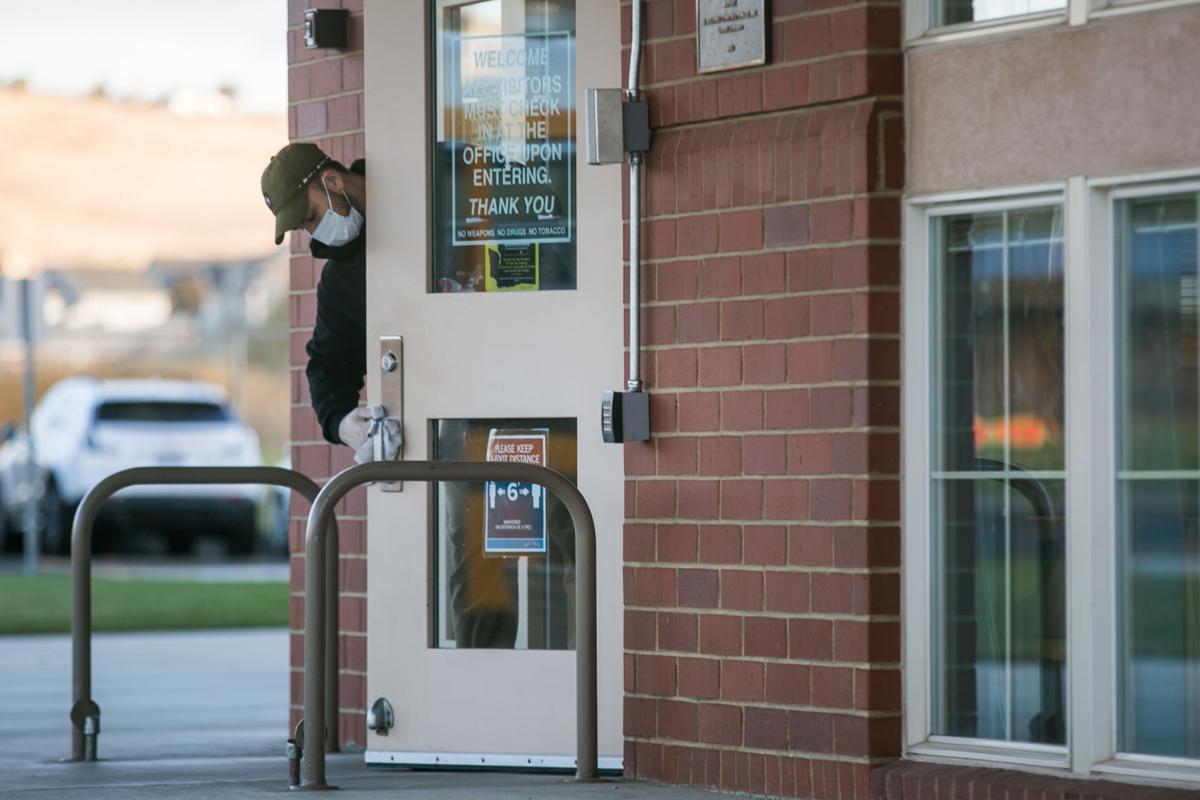 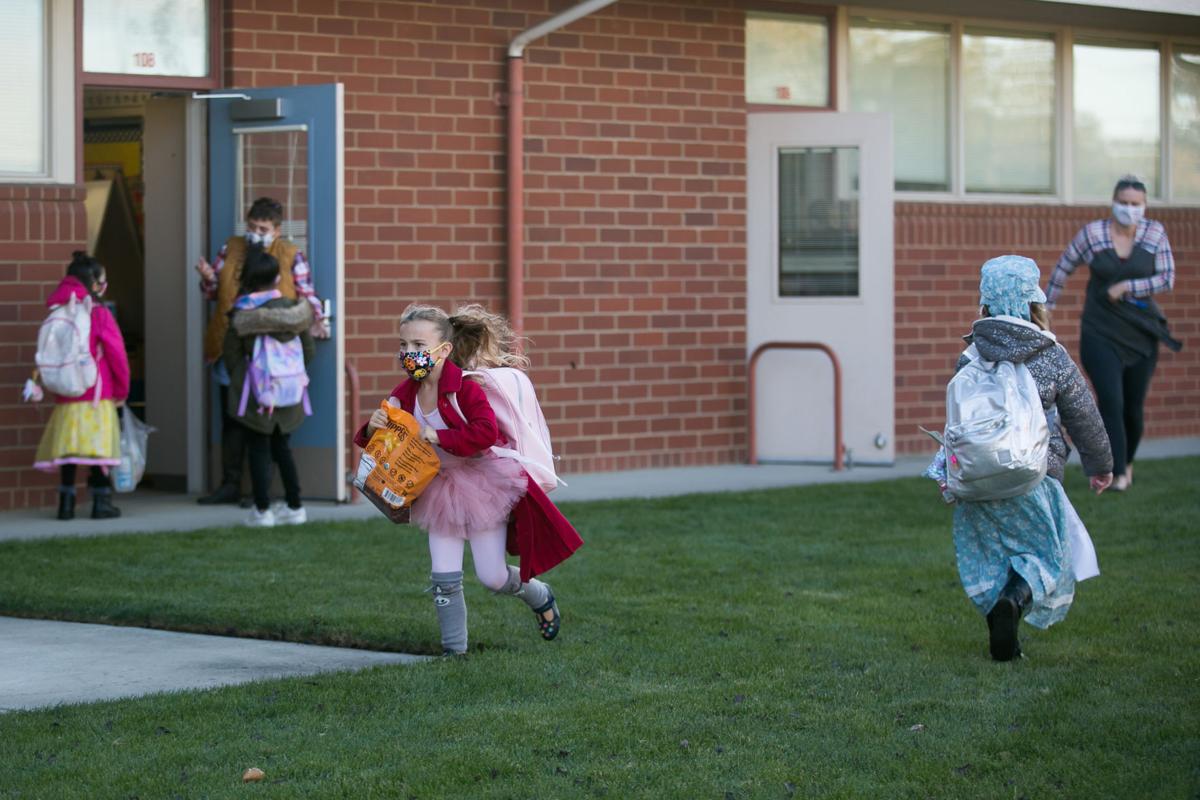 Students in kindergarten through second grade wear face coverings as they return to school for in-person learning Friday, Oct. 30, 2020, at Cottonwood Elementary School in Yakima, Wash. 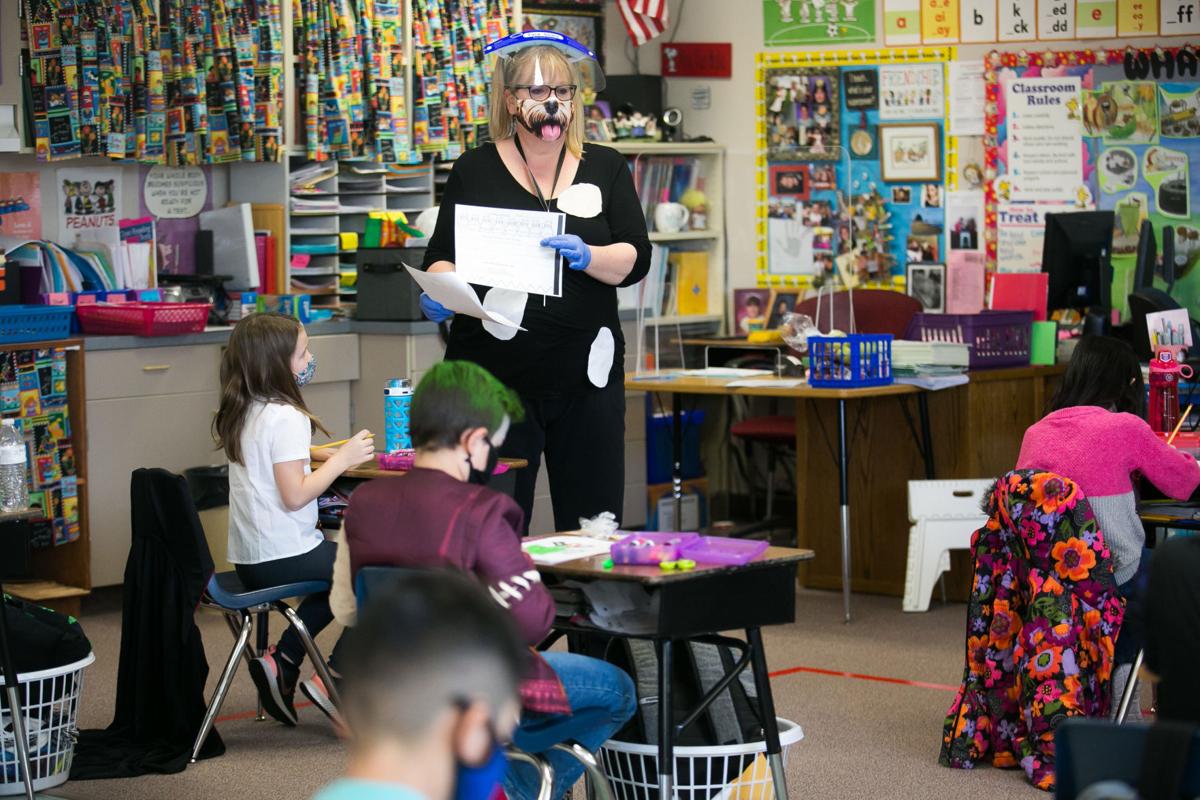 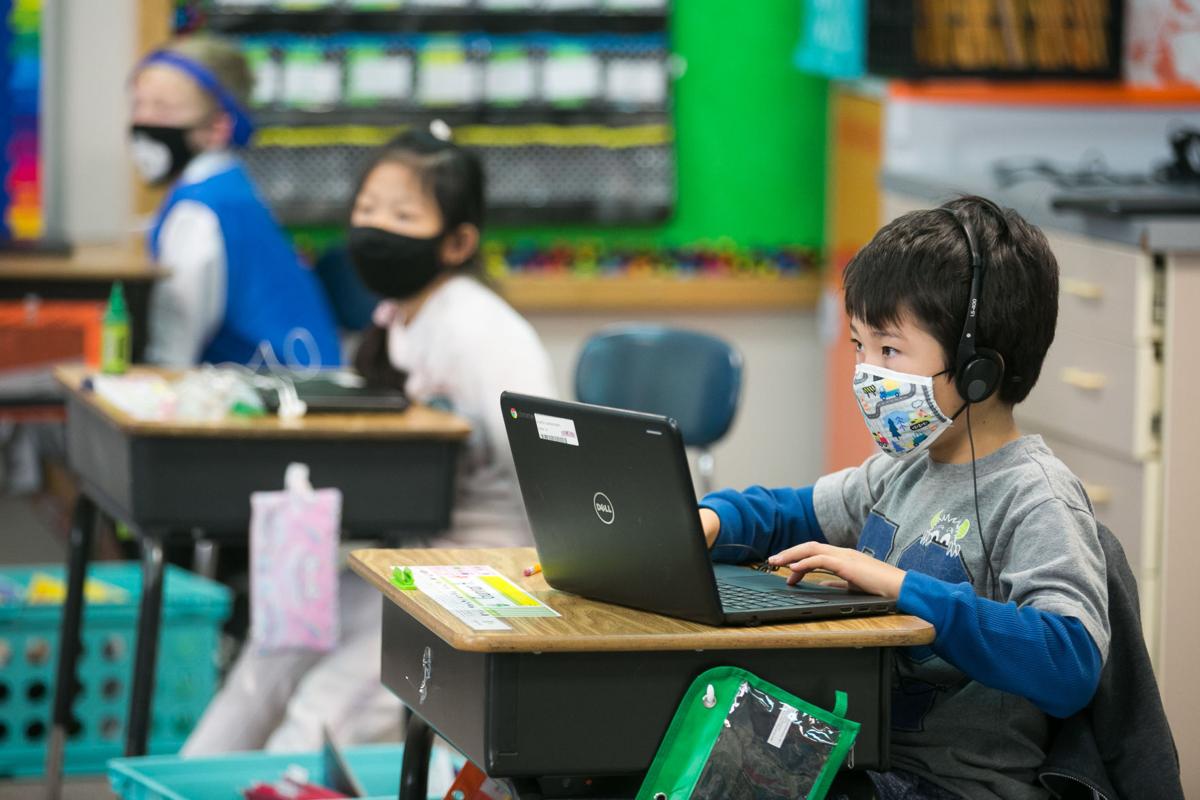 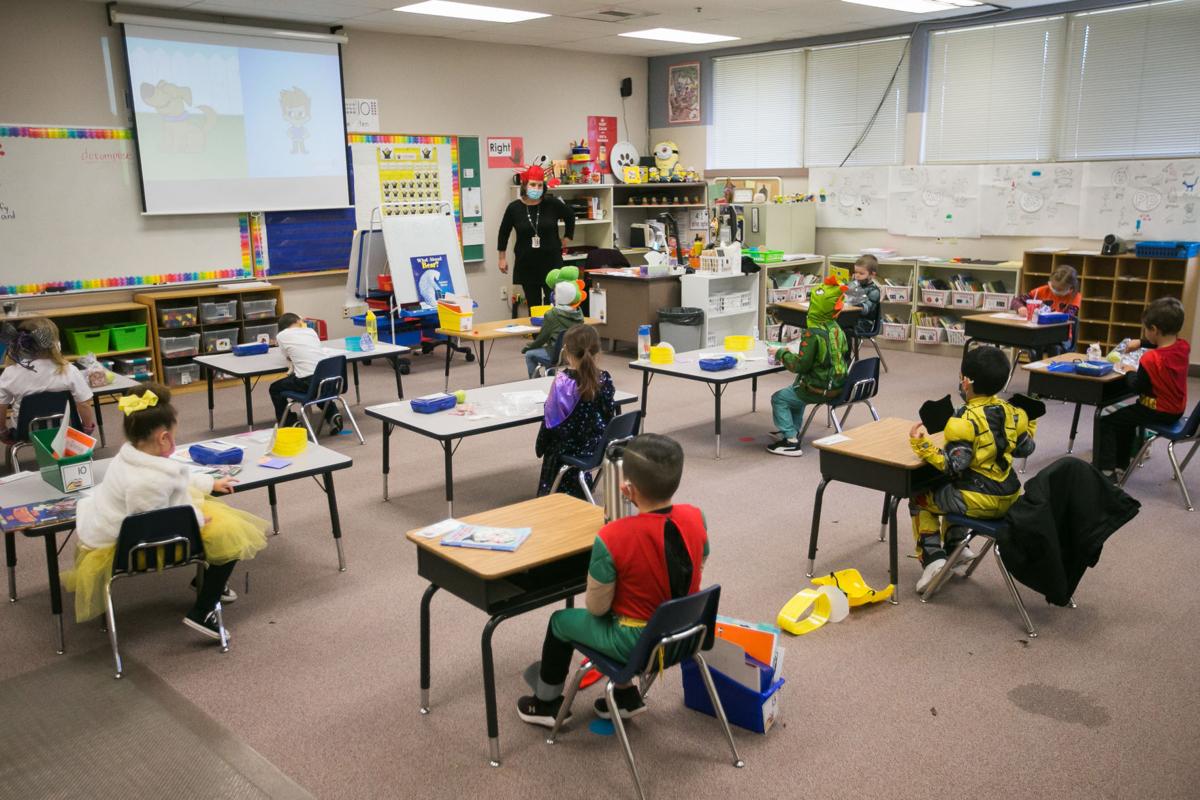 A student wears a face covering on a school bus as students return to school for in-person learning Friday, Oct. 30, 2020, at Cottonwood Elementary School in Yakima, Wash.

Students in kindergarten through second grade wear face coverings as they return to school for in-person learning Friday, Oct. 30, 2020, at Cottonwood Elementary School in Yakima, Wash.

Kindergarten teacher Rachel Wood is overjoyed to have finally met her students in person and welcomed them to their classroom at Cottonwood Elementary in West Valley.

Her class of about a dozen is among 849 students to return to in-person learning across all six elementary schools in the West Valley School District two weeks ago, when students in grades K-2 were welcomed back.

Across the county, some of the youngest students are beginning to return to campus.

Wood has had several concerns about this school year. She worried that by starting the year remotely, it might be challenging to build a trusting relationship with her students or get them excited about learning. She also worried that when they returned to campus, they might struggle with masking.

So far, those worries have been unwarranted, she said.

From the start of the year, Wood’s students were excited to be on video calls with her and their peers, and they excelled in learning. The kindergarten class is mastering the skill of identifying the starting sound of words — orange starts with O. They know all but six letters of the alphabet. In a normal year, a kindergarten class wouldn’t complete the alphabet until the end of December, she said.

When they met in-person in the classroom, Wood said it was just as if they all already knew each other — “a seamless transition.” And whether it’s in class or on the playground at recess, she said, masks are not an issue. Sometimes, Wood said, they do slip down from students’ small noses.

“They just pull it right back (on),” she said. “They just are so happy to be here at school.”

A return to campus

Since then, the community has made significant strides in reducing the number of new COVID-19 cases, leading the Yakima Health District to give approval in late September for schools to gradually reintroduce students to campus. Last week, state public health officials also said early data suggests that schools can reopen safely by following strict safety precautions like social distancing and face masking — although the data remains limited.

Following Yakima Health District guidance, nearly every public school district in the county has started returning elementary students to in-person learning, or will do so this week. They are in close contact with the health district and must require face masks, social distancing, sanitizing and more.

Some, like the Selah and Naches school districts, have chosen to do in-person instruction only part time, enabling them to serve some students in-person in the morning and some in the afternoon to reduce the number of students on campus at once. Students study remotely the remainder of the time. Many districts will gradually reintroduce middle and high school students to this form of hybrid learning later in November and December, as long as COVID-19 trends remain steady.

But there are two holdouts: the Yakima and Mabton school districts. Yakima has chosen to continue remote learning through the end of the semester, with the exception of small groups of high-needs students. Mabton is awaiting an agreement with its teachers union before reopening its campuses.

So far, West Valley is the largest district in Yakima County to have started returning students to campus, with Sunnyside joining the trend Thursday.

As of Monday, 1,486 students in grades K-4 were learning in-person in West Valley. Over 300 elementary students in the district elected to continue remote learning.

Before students arrive at school each day, the student or a parent is required to fill out an online questionnaire attesting that they have no COVID-19 symptoms and have not been exposed to anyone who does. Students who arrive without the form are separated from others until school staff can contact their parents to fill out the form, confirming they are safe to be on campus and join their peers in class.

In the classrooms, dots or strips of tape mark where the desks should sit, properly spaced from the next. When students queue up to go outside for recess, they practice “zombie hands,” said Drake, meaning outstretched arms should be too far away from the next student to touch them.

Breakfast and lunch are served at the students’ desks, with staff carting meals through the halls to each classroom.

In Kim Cone’s second-grade class, story time looks different than it might have in previous years. Students sit at their desks, and Cone projects her voice from the front of the class to make sure each student can hear the story.

“It’s hard when you can’t lick your fingers,” she says from behind a face mask, attempting to turn the page of a book Friday morning.

It’s different than other school years, but Drake said she’s happy to hear the buzz of students back in the building again. Before they returned to in-person learning, she said, it felt like an empty tomb.

Cottonwood parents expressed relief that their kids were back in school. Remote learning has been “kind of rough,” “challenging” and “really hard,” parents of students in K-2 said Friday.

Herminalyn Lopez, a mother of four including a kindergartner and seventh-grader in the West Valley School District, said she had struggled to get her kids to concentrate on their work. She said sometimes the schoolwork her older daughter needed help with was over her head, while her kindergartner required constant supervision while she sat at her laptop. Already, she said, she’s seen her daughter’s learning progress since she’s been back on campus.

Drason Wilder, father of 5-year-old kindergartner Peyton, said his daughter was showing more eagerness to learn. He was glad, he said, that she is finally able to experience kindergarten face to face.

Another parent, Rebecca Parrish, said she had been concerned that her first-grader, Alli, wouldn’t be able to keep her mask on all day. But Alli was confident she could.

Instead, the biggest challenge for Alli is being so near to friends but unable to engage with them how she normally would.

In Julianne Van Dyke’s second-grade class, another student appeared to struggle with social distancing. He slyly scooted his desk forward toward a classmate, but a dot marking where it belonged gave him away.

“Where’s the dot?” she asked the student. “Scoot her back, buddy. Distance.”

Getting students familiar with the COVID-19 safety rules is a process, said Van Dyke, who also holds her hand up like a stop sign when a student approaches to remind them to keep their distance. She also worries that parents might not be honest on the health questionnaire, or that they might send students to campus with symptoms like sniffles that could actually be COVID-19. She hopes that everyone will be vigilant, to prevent outbreaks and allow learning to continue in person.

Van Dyke said she loves seeing students interacting with one another once again, as well as being able to monitor their social and emotional health and their educational progress in real time.

“It’s nice to be able to walk about and see where they are and meet with them one-on-one when they need it. That’s the great benefit,” she said. “Face-to-face is I think the best way, honestly. But just trying to put all the fears aside and do what we need to do is most important.”