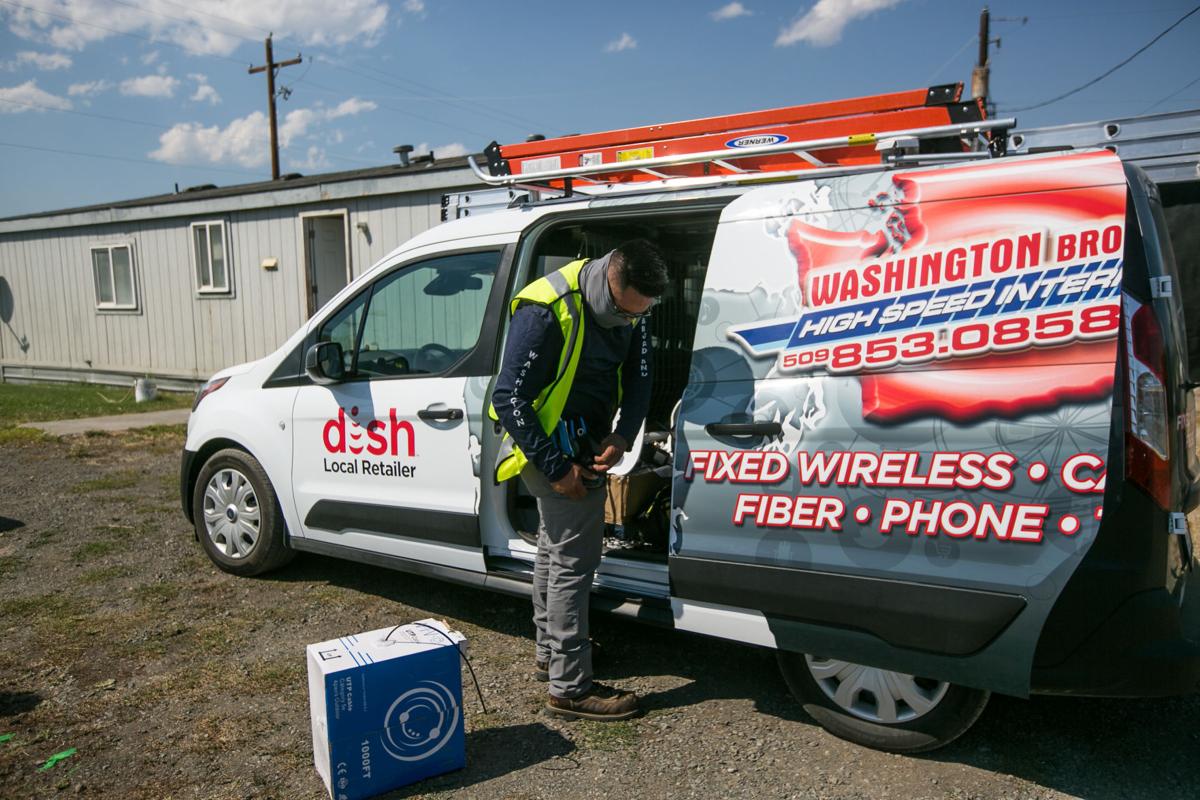 Alfonso Duran, an employee of Washington Broadband, prepares to install a dish for internet-connection at Veronica Gonzalez’s home in Cowiche, Wash., on Monday, Aug. 17, 2020. 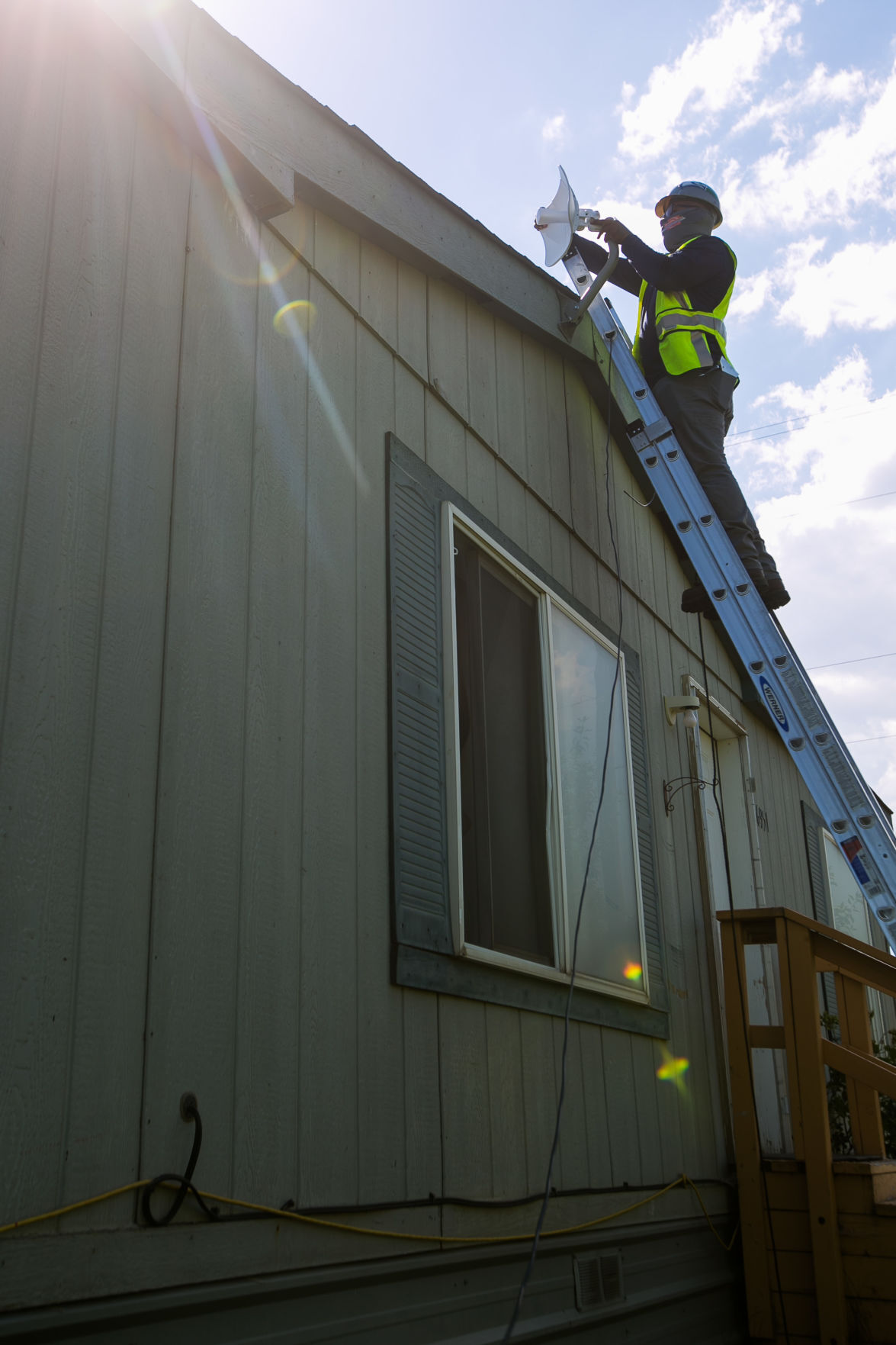 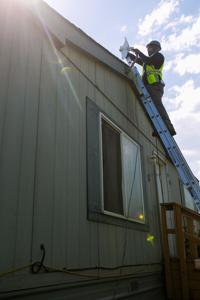 Alfonso Duran, an employee of Washington Broadband, installs a dish for internet-connection at Veronica Gonzalez’s home in Cowiche, Wash., on Monday, Aug. 17, 2020.

Alfonso Duran, an employee of Washington Broadband, prepares to install a dish for internet-connection at Veronica Gonzalez’s home in Cowiche, Wash., on Monday, Aug. 17, 2020.

Alfonso Duran, an employee of Washington Broadband, installs a dish for internet-connection at Veronica Gonzalez’s home in Cowiche, Wash., on Monday, Aug. 17, 2020.

Schools in Yakima County are finding creative ways to connect students to technology.

Countywide, 10 out of 15 public school districts will have a device to send home with every student by the end of fall. Before the pandemic, just five school districts were able to provide that service to all students.

Grandview, Selah, Granger, Zillah and Mt. Adams still don’t have enough devices for each student. But they’re not all far off. Grandview has enough for students in grades 3-12 and is working on getting more; Selah has devices for students in grades 5-12, and has enough to supply younger students who express a need for a device; and Granger — a district of about 1,580 students — purchased 600 new devices over the summer.

Schools are working to make sure students and parents are better prepared to navigate learning platforms this fall.

In the Yakima School District, home to 16,000 students, there are plans for virtual “boot camp” tutorials in platforms like Google Classroom, from the most basic steps to advanced. The Highland School District is arranging for small groups of parents to receive training to better guide their children at home.

Districts also see a need to make sure all students have access to the internet from home. It’s something superintendents say is hard to measure, since it’s challenging to get in touch with families that aren’t plugged into technology to assess their needs.

Districts are making an effort to gauge gaps and fill them, when possible. School administrators say this is one of the biggest challenges they’re facing in ensuring equitable access to learning.

They are working to address the problem.

The Yakima School District spent the summer growing a system that will ensure all students within the district have internet access at home. Community partners, such as local churches, are allowing the district to wire its internet through their buildings, expanding the reach of private internet connections. Rather than logging onto protected district Wi-Fi from campus, students and staff should soon be able to do the same from home, according to the district, which expects the effort to be complete within a few months of the start of school.

The project will cost the district roughly $400,000, with a recurring cost of $2,000 each month, said district technology director Andy Gonzalez. The district is applying for federal CARES Act funds and grants to help offset the cost. It could also be eligible for federal E-rate funding, which helps schools and libraries access affordable internet. If so, 90% of the monthly cost might be reimbursed.

In Naches Valley, the district has sent out surveys asking families if they have internet. While it’s not clear exactly how many families are without service, the State Route 410 stretch is “the problem child” of the effort to connect families, said district technology director Brian Johnson. There, Wi-Fi hotspots provided by the district might be out of range, and cellular or satellite connections can be weak due to the hills and forest.

For students without reliable internet, the district might deliver USBs with preloaded lessons to complete and return for grading, in an effort to circumvent the need for internet altogether. The district also has a strong Wi-Fi broadcast from its school campuses in Naches, meaning students able to drive into the parking lot can access the internet there. But administrators said that isn’t a solution for everyone, considering the district covers one of the largest geographic regions in the state.

In nearby Highland School District, about 40 families were without internet in the spring, said Superintendent Mark Anderson. The majority were in range of internet service but could not afford a subscription.

Highland negotiated with local internet provider Washington Broadband to get a discounted rate for these families if the district paid for the subscriptions. Using funds for COVID-19 response as well as migrant program funds, the district connected the families to the internet at home for the first time.

Anderson estimated that about five families in the district might still not have a connection because they live in an area that isn’t served by broadband providers. The district is also considering preloaded USBs for students, as well as prioritizing these students in returning to campus in small groups for in-person learning — something permitted by the Yakima Health District following certain safety guidelines.

As far as internet subscriptions go, Washington Broadband said it would be open to similar arrangements with other districts. Anderson of Highland said the approach was an emergency relief effort, but the district likely can’t afford to maintain the cost of subscriptions long-term.

But there’s a chance he won’t have to worry about that.

At the start of the month, the state Office of the Superintendent of Public Instruction announced $8.8 million in federal CARES Act funding would go toward internet plans and technology for low-income families for a year. It’s geared toward families within range of service who are unable to pay monthly fees. The state office estimates that upward of 50,000 students could be eligible.

Across the county, Superintendent Curt Guaglianone of the Mt. Adams School District hopes to see those funds support some of his students. At the elementary school level, he said 23% of students don’t have their own device. Districtwide, 38% of students say they don’t have internet at home.

Guaglianone said internet infrastructure in the area has grown significantly in recent years, but cost is still a prohibitive factor for many local families. The district expanded the reach of Wi-Fi on its campuses so students can use it from the parking lot, if needed. But he said he also hopes to collaborate with the Yakama Nation to improve students’ connectivity at home, as well as pursue some of the CARES Act funds.

For local districts, student connectivity appears to be an ongoing issue to continue improving upon.

“The main goal always is to make technology transparent to learning. We’d like it to get out of the way,” said Johnson of Naches Valley. “It is a tool, and we just want to make sure that teachers can do their jobs and students can learn.”

The state Department of Commerce started a broadband access and speed survey this summer to more accurately count who has high-speed access in Washington and how much it costs.

In Yakima County, a cross-organization campaign aims to get 95,000 local respondents to respond to the survey by the end of September, according to Sharon Miracle, president and CEO of the Yakima Valley Community Foundation. Miracle said this data could help the Valley secure funding to build infrastructure where there are holes.

To participate in the quick survey, visit bit.ly/YHR-BroadbandSurvey.

This is the second story in a two-part series. To read Monday's story, go to bit.ly/YHR-InternetSeries.

Washington’s year of remote school is beginning. But some households still can’t connect.

When a district survey asked if students had internet access at home, Jessica Robinson responded that her elementary-aged daughter did not. Al…