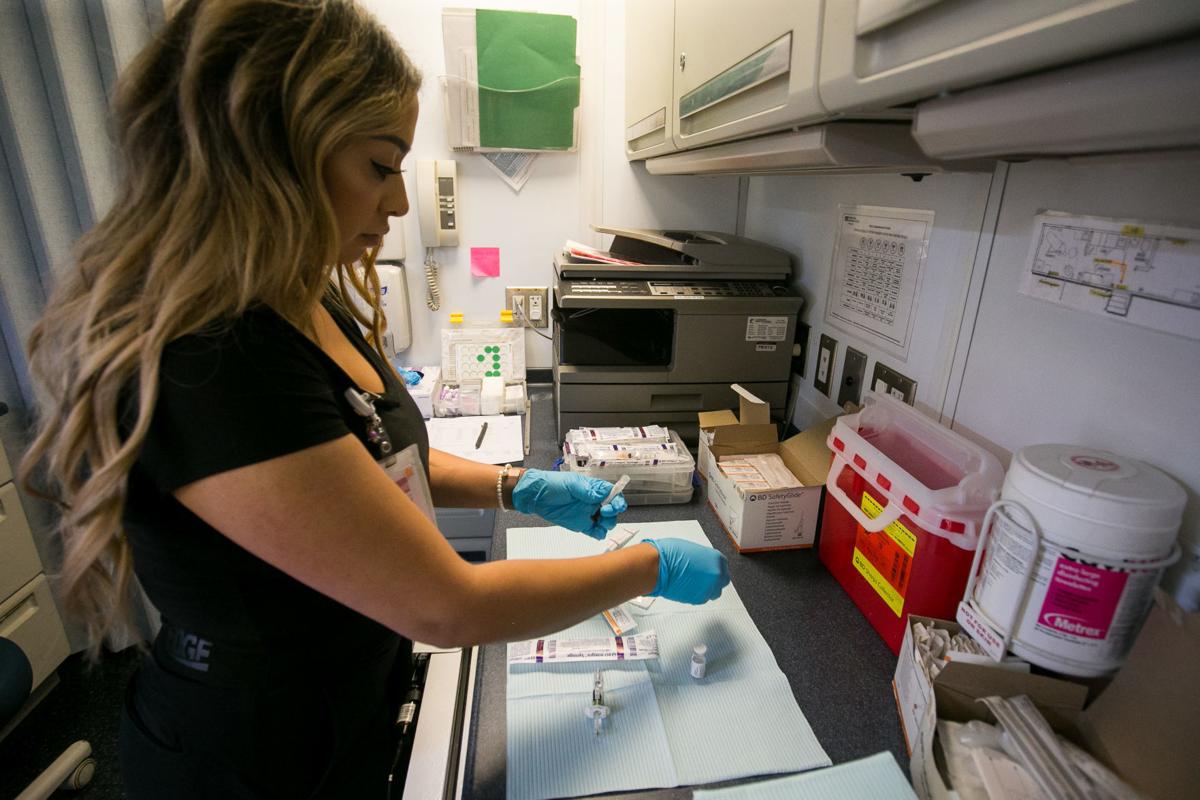 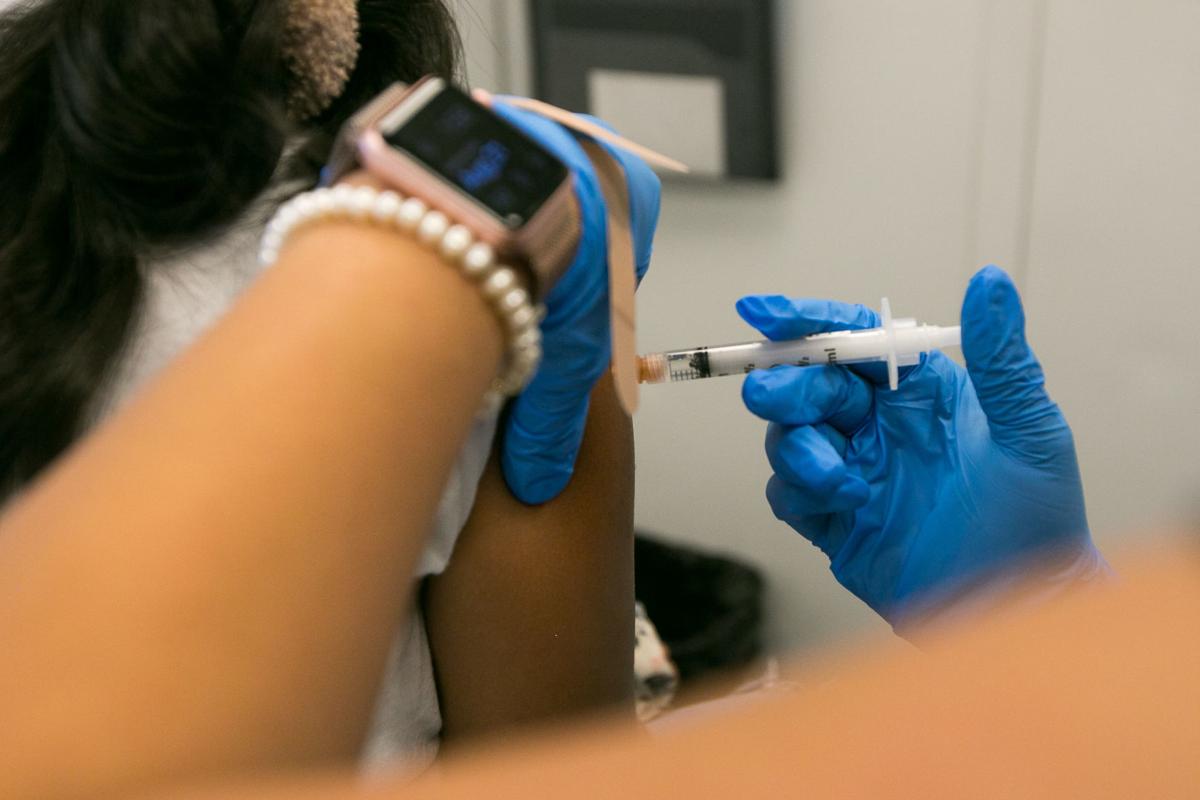 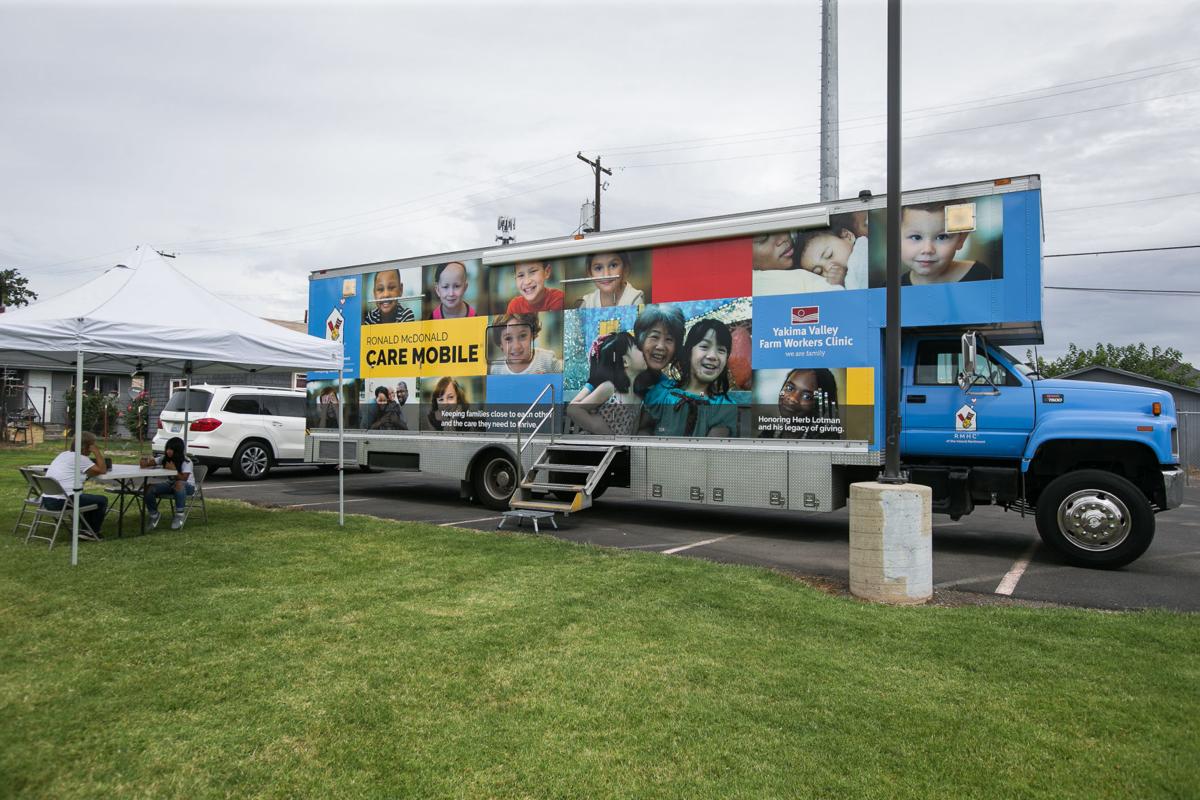 A Yakima Valley Farm Workers Mobile Clinic was set up Wednesday near North Fourth Avenue in Yakima The mobile clinic is open to all Yakima School District students. 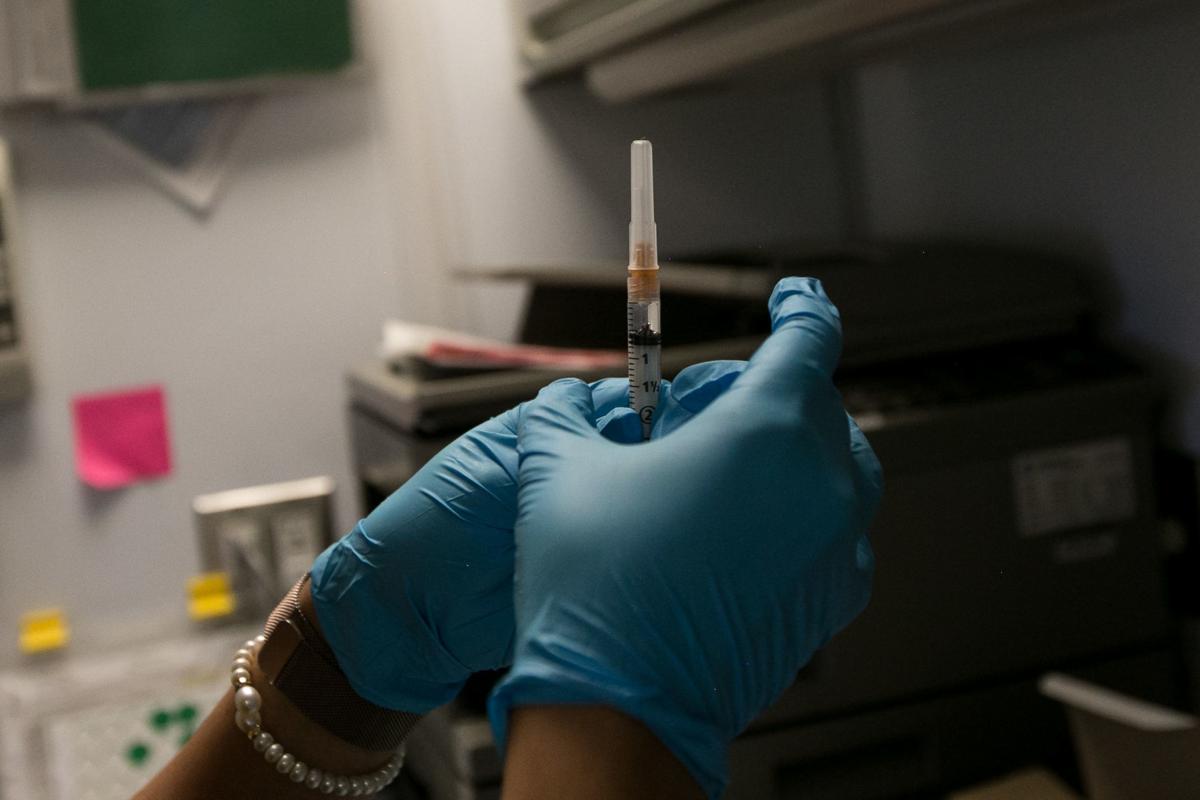 A Yakima Valley Farm Workers Mobile Clinic was set up Wednesday near North Fourth Avenue in Yakima The mobile clinic is open to all Yakima School District students.

The number of Washington students going to school this year without their measles, mumps and rubella vaccination could dwindle because of a new state rule eliminating personal exemptions to the requirement.

It should have a minimal impact in Yakima County, where immunization rates are already relatively high, with just 1.4 percent of school-aged children enrolled in public schools exempt from the vaccine.

Medical experts say it’s an important measure locally, regardless, because at least 90-95 percent of a population must be immunized to prevent dangerous breakouts.

The rule change comes in response to an outbreak of measles in the state this year — which contributed to the greatest number of cases of the virus nationwide since 1992, according to the Centers for Disease Control.

The measles virus travels through air and is extremely contagious. Young children, adults over 20 and those with weak immune systems are most vulnerable to the virus, and it’s the leading cause of death among children worldwide. The measles, mumps and rubella (MMR) vaccine is the most effective known preventative measure against measles.

The virus was declared eliminated in the U.S. in 2000. But this year’s outbreak led to 124 people who contracted measles being hospitalized, and 64 experiencing complications such as pneumonia and encephalitis nationwide.

“If you look at all the recent outbreaks in the U.S., there is one thing that is in common: pockets of populations that have a low vaccination rate, which allow outbreaks to occur,” said Tanny Davenport, a Yakima family physician and Chief Medical Officer of SignalHealth at Virginia Mason Memorial hospital. “So it’s really simple. … If you keep that vaccination rate above 90 percent, the risk of outbreaks are quite low.”

Until earlier this year, Washington was among 17 states to allow personal belief exemptions to the MMR vaccine. There are now just 15 states.

In late April, state lawmakers passed a bill removing personal exemptions, leaving only religious and medical exemptions to the vaccine for students attending preschool, child care or school in the state.

Religious exemptions can still be applied for using the same form as personal exemptions. It requires a doctor’s signature. Another form may still be used for exemption of families whose religion objects to medical treatment.

Impact of the rule

Medical experts recommend two doses of the MMR vaccine: once around 12 months old and again between the ages of 4-6, before entering school.

Neither Davenport nor local school districts reported noticing a change in vaccination patterns ahead of the school year, or new exemption requests being made.

Yakima School District communications director Kirsten Fitterer said it was too early to tell if there would be an impact, as students have a 30-day window to get up to date on vaccinations or submit exemptions.

West Valley School District, one of the highest exemption districts in the county with 73 students attending without MMR vaccines in the 2017-18 school year, reported only a few parents asking about the change.

Countywide, just 1.4 percent of 52,519 students registered in public schools in the 2017-18 school year had MMR exemptions, according to the state Department of Health. It is unclear what proportion of these were personal exemptions, although personal exemptions to vaccines in general in the county outweigh religious and medical.

Yakima School District, the largest in the county with roughly 16,000 students, had just 129 students — or 0.8 percent — exempt from the MMR vaccine.

Fitterer said the district’s immunization rate was among the best in the state, and this week and last, the district was providing immunization clinics through the Farm Workers’ Clinic for any students who were not up to date. The impact of the new rule was not yet clear, she said, as the law allows a 30-day grace period to comply with the MMR vaccination requirement.

“We may know more at the end of September,” said Fitterer. “We have reached out to our families with a personal exemption to provide the information in the law. It is a very low percentage of our enrollment.”

All state lawmakers who represent Yakima County voted against the change in vaccine exemptions this spring.

State Rep. Gina Mosbrucker, R-Goldendale, of the 14th District, said she voted no in response to feedback from her constituents in opposition. In addition to emails and phone calls to her office, she said, the day of the vote hundreds of people from around the state lined up to speak against the bill in Olympia, expressing concerns that the vaccine was unsafe.

Rep. Jeremie Dufault, R-Selah, of the 15th District, said he voted against the change because he believes it should be left up to parents to decide.

“As a soldier, I’ve had every vaccination under the sun, and I choose to vaccinate my children,” he said. “But I don’t believe government should have the power to compel parents to vaccinate their kids in order to attend public school.”

A lack of producer liability — removed by law in 1986 — is of primary concern in the safety of the vaccine, said Jena Dalpez, program director for Informed Choice Washington, an organization opposed to the change in law. She said Informed Choice wants manufacturers like Merck, the sole MMR producer in the U.S., to be held liable so they will take vaccine testing more seriously.

But medical experts say the vaccine is safe — and necessary.

Getting vaccinated is much safer than catching the illnesses the MMR vaccine protects against, said Kristen Maki, communications director for the state Department of Health.

“As with all vaccines, there can be minor reactions from the MMR vaccine. These reactions might include pain and redness at the injection site, headache, fatigue, or a vague feeling of discomfort,” she said.

Maki added that roughly 15 percent of people who get an MMR vaccine experience a fever, while roughly 5 percent get a rash. Unlike measles cases, these are not the actual virus and cannot be spread or transmitted to another person, she said.

“The rash isn’t dangerous or contagious and it will go away on its own without treatment. … Serious reactions to vaccines are rare,” she added. “When reports of severe vaccine-related adverse events are made, they are taken seriously and investigated appropriately.”

Allegations of links between the MMR vaccine and autism — among the concerns expressed to Mosbrucker and other area lawmakers — have been debunked after the author of the report claiming the link retracted his findings. He was paid by a group opposed to vaccinations.

The risk of hospitalization and severe complications if populations are not properly vaccinated is much more likely and dangerous than these rare instances, Davenport said.

“By immunizing as many people as possible, we can maintain immunization as a group and prevent outbreaks,” he said. “This is not only protecting your children but also your loved ones — in particular, young ones who are not able to get the vaccine.”

Yakima County exemption rate may be even lower

The true number of exempt students enrolled in schools in Yakima County could be even lower than the state Department of Health records show.

Of the 754 students countywide in 2017-18 who were exempt from the MMR vaccine, 327 were in Granger School District, according to DOH data submitted by the district.

But district nurse Brenda Stollwell said there are just six students districtwide who are exempt. One has a medical exemption, while the other five are personal or religious. Stollwell said the state records were erroneous, although she did not know why there was a discrepancy.

“Right now, our exemption rates are really good,” she said. “The thing is, people with a personal exemption can just change it to a religious exemption now.”

Already, she said two of the five students with non-medical exemptions had renewed their status. This means if there were to be another outbreak, these students would be excluded from school until the DOH said they could return in order to prevent them from catching or spreading the virus, she said.

The discrepancy could mean that closer to 400 students countywide are exempt from the MMR vaccine.