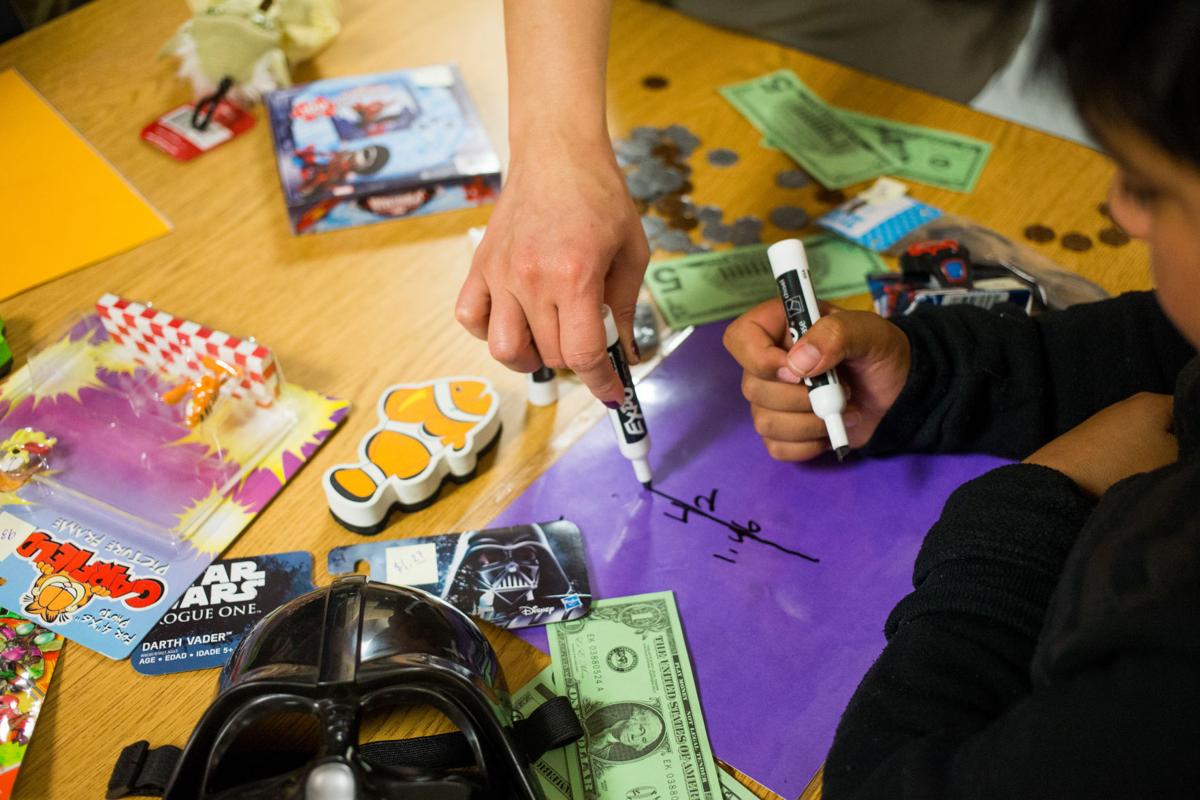 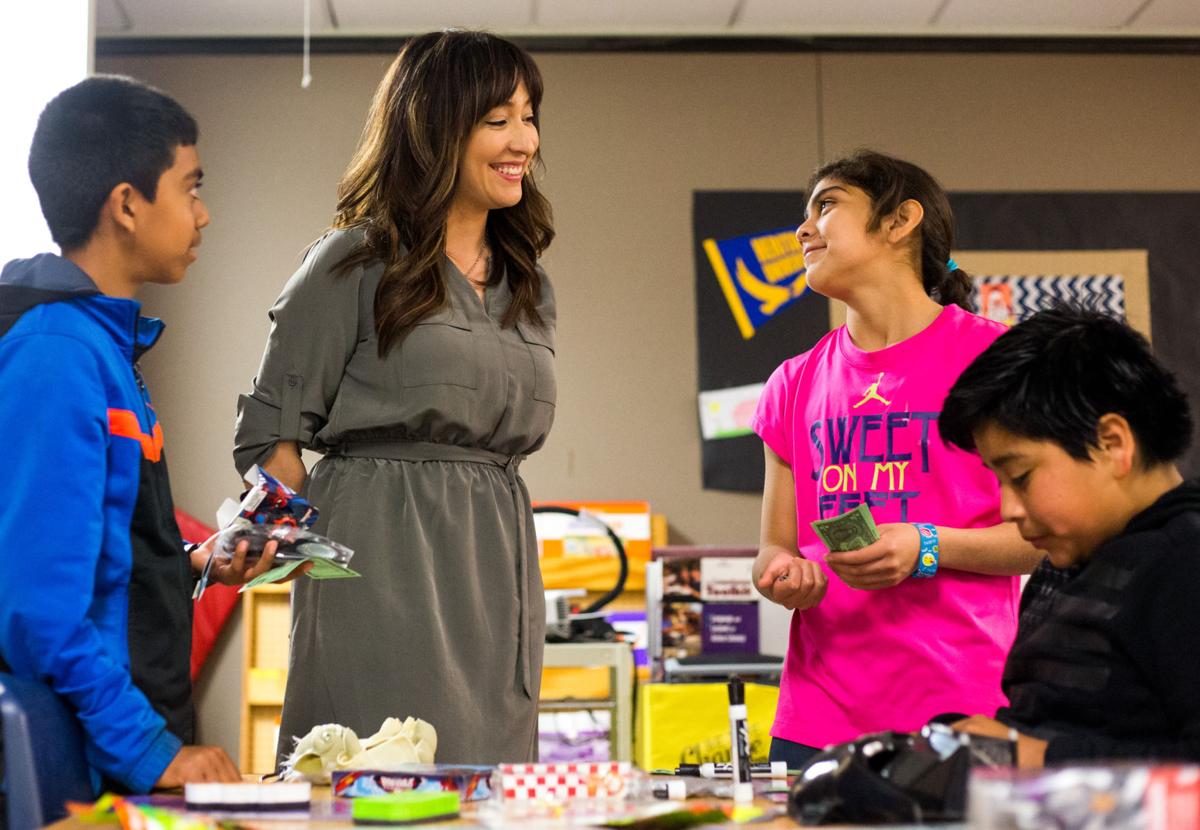 Lindsay Medrano was working with students in her resource room at Artz Fox Elementary School in Mabton last week, helping them learn math through a real-world exercise.

Using play money, Medrano had three students playing “customers and cashier” at a store. With prompting from her, the students totaled their bills and counted change while practicing how to “carry” and “borrow” numbers to complete the equation.

The three children were not the only students in the room. Medrano, who was hired as a special-education resource teacher in June, is enrolled in Heritage University’s accelerated class for licensing teachers. When she graduates Saturday, Medrano will receive a master’s degree in teaching as well as a teaching certificate with a special education endorsement.

The program at Heritage, and a similar one at Central Washington University, are part of a state effort to bolster the ranks of teachers in critical areas such as special and bilingual education.

With fewer people enrolling in teacher training programs in the state’s colleges and universities, as well as teachers retiring and student population growing, the state is facing a shortage of teachers in the range of thousands, according to state officials.

Last fall, the Office of Superintendent of Public Instruction reported that 20 percent of principals surveyed in the state said they were in a “crisis mode” for hiring teachers, with 70 percent reporting that they were struggling.

However, a study coauthored by Dan Goldhaber, director of the Center for Education Data and Research at the University of Washington, said reports of overall teacher shortages nationwide are not fully substantiated. Goldhaber’s research, published by the Brookings Institution, found that there are problems recruiting teachers in certain specialties, such as special education and science, technology, engineering and math.

Sue Anderson, state Educator Effectiveness Office director, said the state has traditionally seen teacher shortages in the special education and other specialized fields that are in high demand, but noted the demand for elementary school teachers has increased as a result of class-size-reduction initiatives combined with fewer people coming into teaching.

While Washington state is looking at measures such as creating reciprocity agreements to honor out-of-state teaching certificates and recruiting college and high school students for teaching programs, Anderson said the state has four programs offering an alternative route to get teaching certificates for non-traditional candidates.

At Central Washington University, its School of Education offers training in three of the four alternate routes. It does not offer the program for paraprofessionals to earn bachelor’s degrees, said Mindie Dieu, the school’s executive director.

CWU and Heritage take students in the accelerated program, where they spend all summer learning how to manage a classroom and teach subjects. They then spend a school year working in a classroom teaching.

During that year, the teachers-in-training will meet with mentors, as well as have university faculty observe their classroom work.

Central Washington’s program operates with about 40-45 students a year, Dieu said. When they complete it, they are recommended for a K-8 teaching certificate, with an endorsement in special education, bilingual or English as a Second Language instruction.

It also is the only alternative track the school offers.

Since 2015, when the program began, 75 people have graduated and become teachers. The completion rate is 86 percent, she noted.

The program attracts people who did not initially consider teaching as a career, Monroy said. but while it’s far from easy, students who are committed will complete it.

“I was told this was going to be the hardest academic year of my life,” Medrano said. She said the summer class was the equivalent of having a full-time job, attending classes all day.

Medrano said it was important for her to do it. Her original path to school detoured when her first child was born, and she went to work to support her family, taking on several jobs, most recently as a speech pathology aide in the Sunnyside School District.

When the youngest of her four children started kindergarten, Medrano decided to get her degree. She took online classes through Utah State University and earned a bachelor’s degree in general studies with an emphasis on special education and communications disorders.

She was debating whether to go into speech therapy or teaching when she heard about the Heritage program, and decided to pursue the teaching program.

The first day in a classroom by herself with students to teach was “intimidating,” Medrano said.

“You think, ‘Are you serious? You’re going to put us in a classroom by ourselves?’” Medrano recalled. But she said the school provides support with weekly meetings and drop-in visits from mentors to evaluate her performance.

Medrano has seen changes with her own children, who have taken their own education more seriously. Her oldest son, a high school student, is planning to take college classes while in high school so he can receive his associate degree at the same time.

“This program has been a life-changer,” Medrano said. “I have gone from being a speech assistant to a teacher.”

■ Heritage University offers the possibility of earning a Master in Teaching (MIT) degree in as little as one year. Students choose the program that best fits their learning style and life situation: HU Theory to Practice, HU Residency, or an intensive HU Accelerate program.

Get more information at http://www.heritage.edu/MIT.

■ Central Washington University has a hybrid online alternative certification program for those with a bachelor’s degree to teach high-need subjects in rural districts across Washington. Learn more at http://www.cwu.edu/csel/alternative-pathways.

■ For more information on Washington’s alternate routes to teacher certification, go to http://pathway.pesb.wa.gov/future-educators/alternative-routes