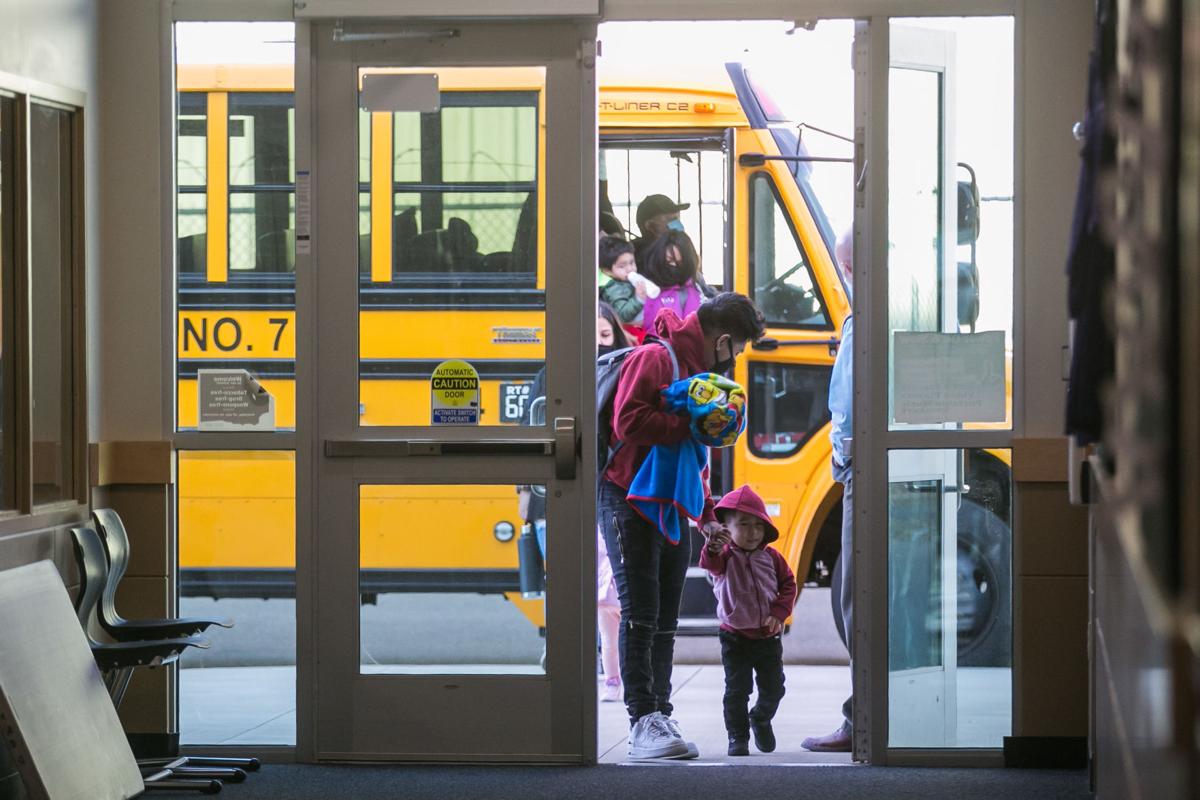 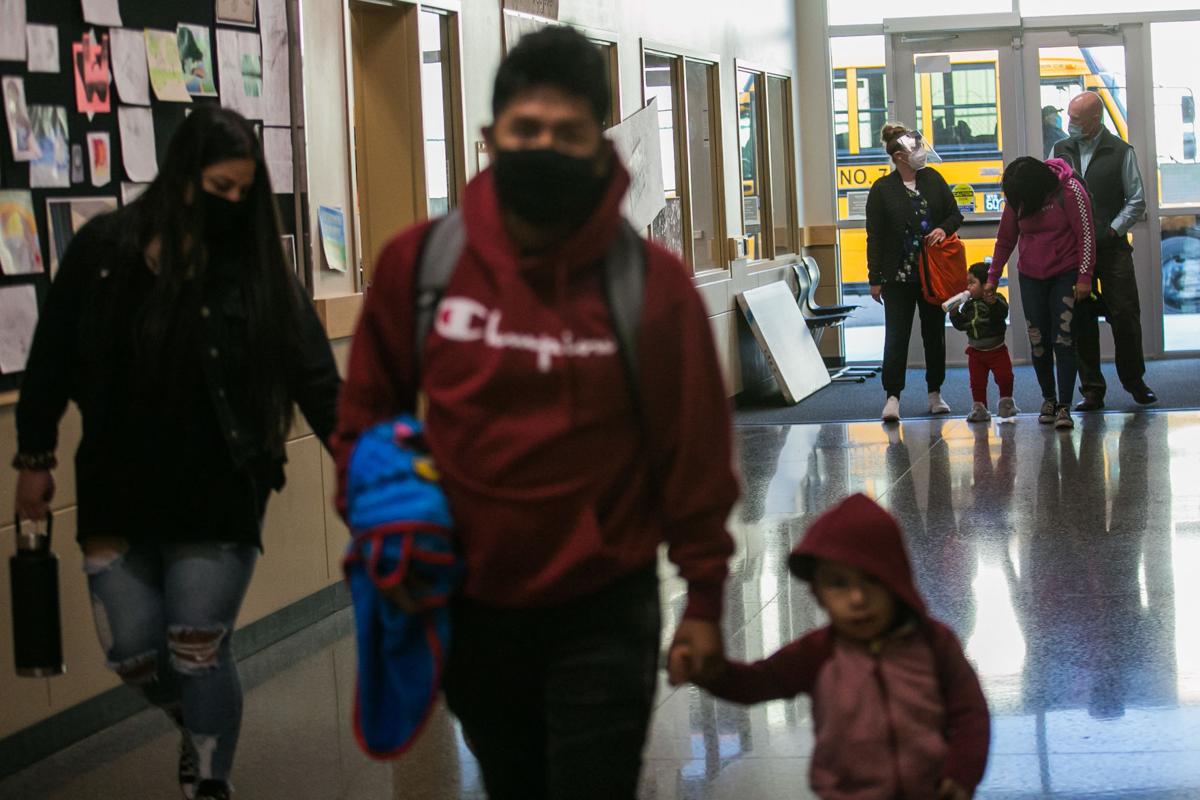 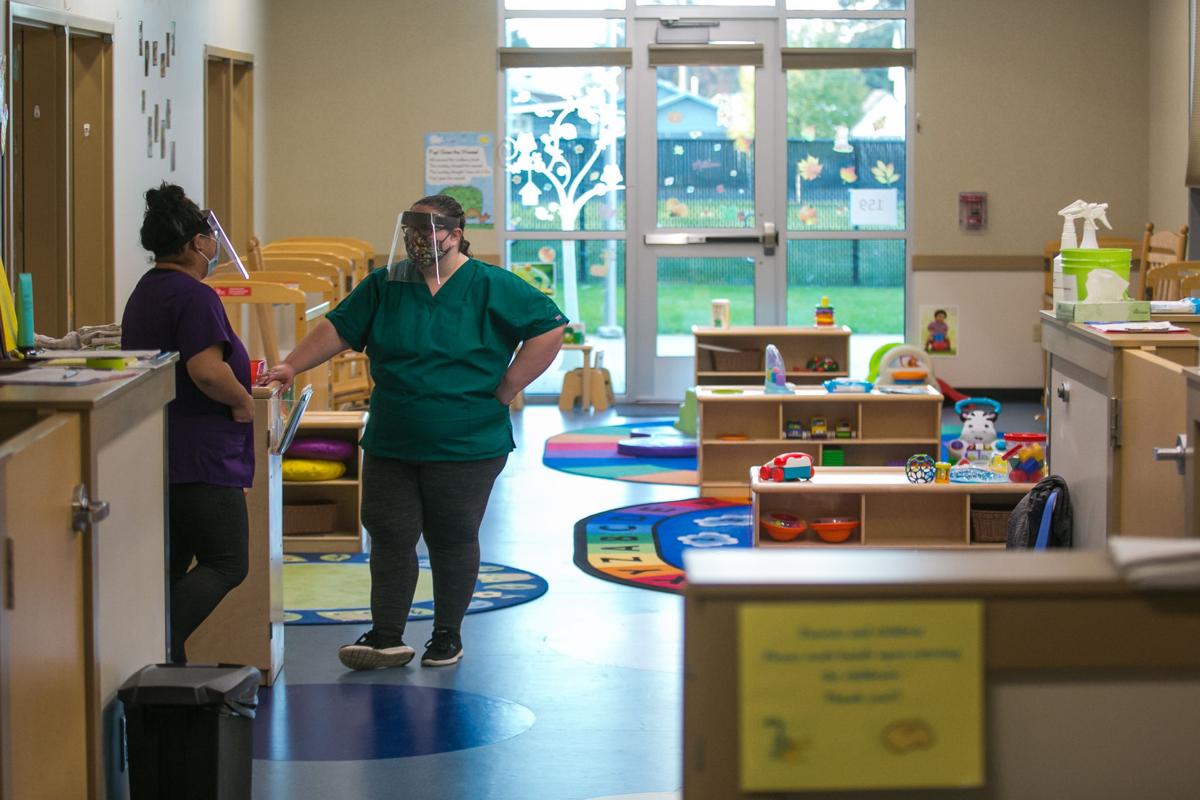 Paraeducators Ashley Rojas, left, and Cassie Schultz wear a mask and plastic face covering as they wait for children to arrive at the child development center at Stanton Academy in Yakima, Wash., Wednesday, Oct. 21, 2020. 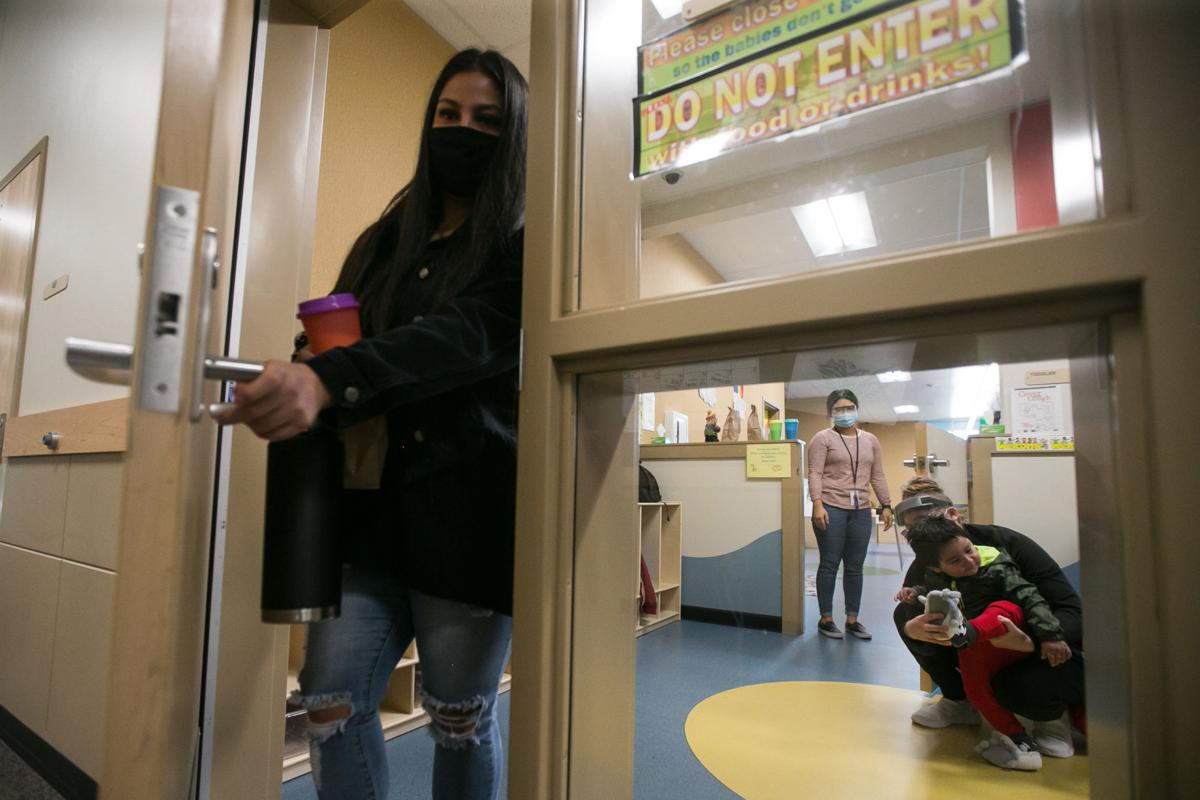 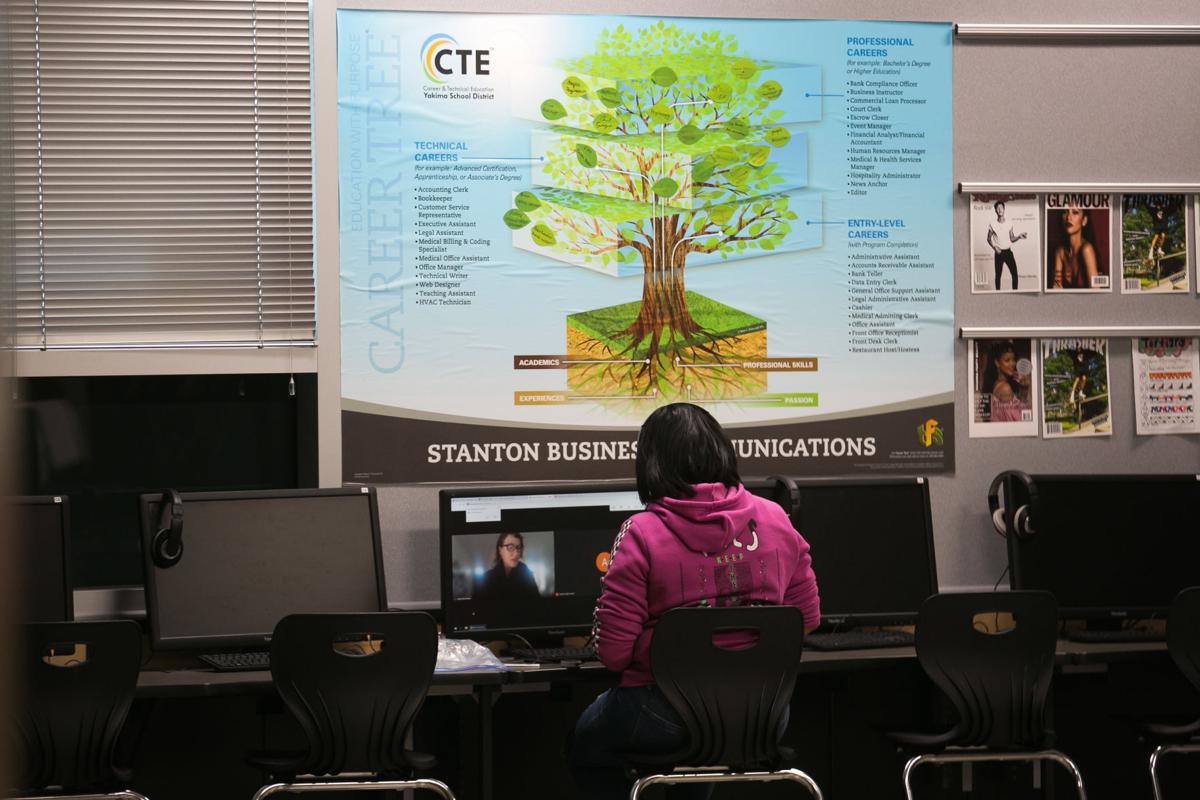 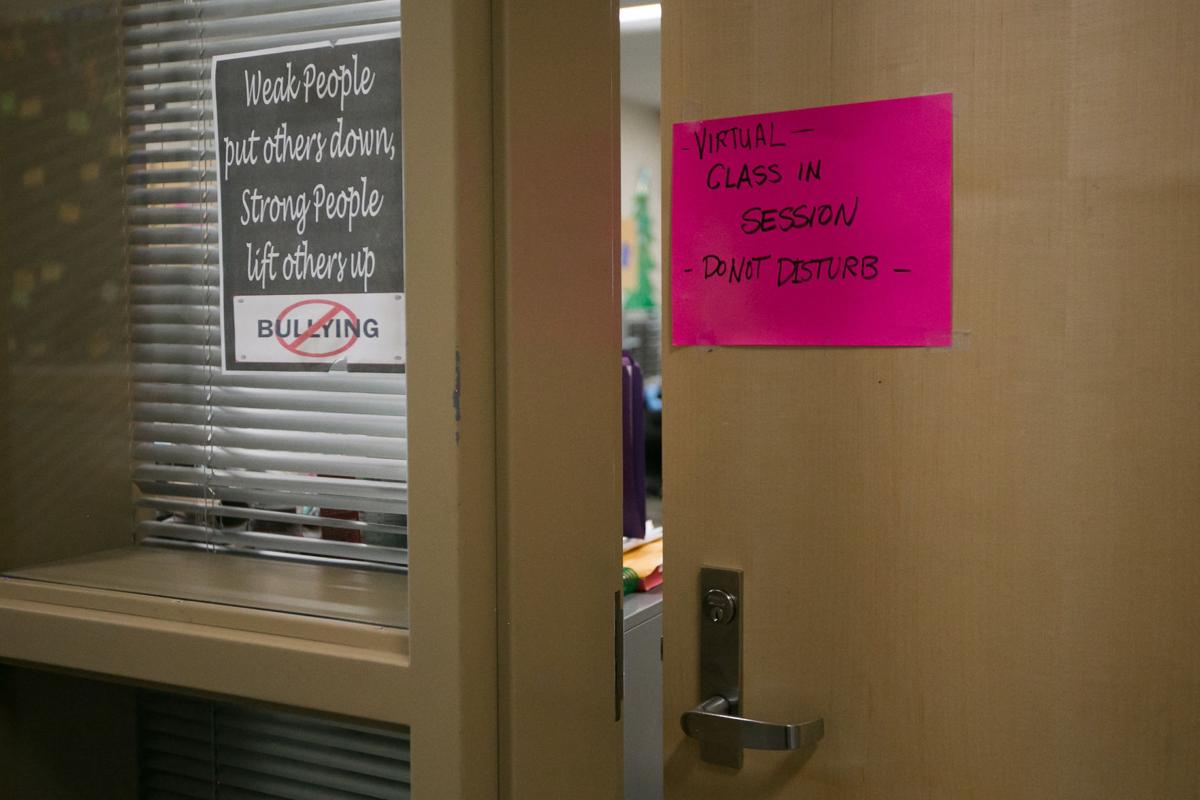 A note is taped to a door that bears the inscription “Virtual class in session, do not disturb” at Stanton Academy in Yakima, Wash., Wednesday, Oct. 21, 2020.

Paraeducators Ashley Rojas, left, and Cassie Schultz wear a mask and plastic face covering as they wait for children to arrive at the child development center at Stanton Academy in Yakima, Wash., Wednesday, Oct. 21, 2020.

A note is taped to a door that bears the inscription “Virtual class in session, do not disturb” at Stanton Academy in Yakima, Wash., Wednesday, Oct. 21, 2020.

Last school year, 17-year-old Victor Casiano and his now-2-year-old son Bryant arrived by school bus at Stanton Academy in the Yakima School District each day together.

There, Casiano would take his son to an early-learning center on campus, where paraprofessionals taught and cared for Bryant while Casiano attended his regular classes.

He’s one of a handful of teen parents at the school who participates in the district’s Graduation, Reality and Dual-role Skills (GRADS) program for parenting or pregnant teens. In addition to providing child care while the young parents are earning high school credits, it teaches them skills for raising their children and for life outside of school, and provides an early learning environment for their kids.

But when schools statewide were mandated closed in March amid the growing COVID-19 pandemic, Casiano and his son were suddenly home-bound and unable to access the support they relied on from the school district. While working through coursework in the spring and fall, Casiano was simultaneously taking care of Bryant, who was vying for his attention.

“It was a struggle, because I needed to take care of Bryant, too, and he wanted to play with me, but I’m in class for eight hours,” he said.

Casiano said he hadn’t felt fully focused on either task — until earlier this month, when he was among a handful of Stanton teen parents to be invited back to campus to resume in-person learning. They were the first in the district to return in person.

Ahead of the new school year, most schools statewide were encouraged by the state to continue remote learning due to high transmission rates of COVID-19 in their respective communities. Yakima County schools were among them, with the county far above the threshold of what is considered a high-risk community until last week, when it saw 75 cases per 100,000 population for the first time.

But even in these cases, the state Office of the Superintendent of Public Instruction said districts should consider bringing small groups of students considered “furthest from educational justice” back to campus gradually. Suggested groups were English language learners, special education students, low-income students and those experiencing homelessness, among others.

Before many local schools had started inviting these small, prioritized groups back to campus, the Yakima Health District in late September gave the OK for districts to begin returning elementary students to campus, followed by a partial return of middle school and high school students.

The Yakima School District decided to maintain its plan to continue remote learning through the end of the semester due to community transmission rates and an increase in cases among staff when teachers returned to buildings to remote teach in the fall. The exception was the small groups of high-need students.

The district deemed teen parents the highest priority, and on Oct. 16, three Stanton parents returned to school with their kids in tow. They’ll be attending school three mornings a week for the foreseeable future. As many as seven teen parents are expected to participate once others complete the necessary paperwork, according to school officials.

“I pushed to get them back (on campus) because I knew last spring that it would be harder for them to get their education,” said Stanton Principal Dave Chaplin. “We’re just really excited to have kids back in the building.”

Bringing one small group of students back on campus also allows the district to plan logistically to add in more students; the hope is to eventually return all 15,600 students in the district to their classrooms, according to district officials. The current move required the help of bus drivers, food service workers, teachers, paraprofessionals, school nurses and more to orchestrate.

Amanda Jewell, executive director of student life, said the district was well-prepared for this group, since it provided child care for first responders in the spring when school closed.

On Monday, middle school special education students who ordinarily learn in self-contained classrooms will be the second group of high-needs students to return to campuses districtwide. They’ll be followed by self-contained elementary and high school students in the coming weeks, as well as teen parents at Davis and Eisenhower high schools, Jewell said.

Working with the students

“You (could) hear little ones in the background,” Velikanje said, reflecting on class video conferences when Huizar was still learning remotely. “At times, she would have to type, ‘Be right back.’”

Now, the mom has support, with nearly-3-year-old Eileen in early learning down the hall.

For Huizar, she’s also excited that her daughter once again has more mobility and exposure to other people.

“It’ll be really good for her that she’s not stuck at home all the time,” she said of Eileen. “You can’t really do much with this COVID thing.”

Classmate Cicladi Zamora, 18, echoed Huizar. During remote learning, she had to help around the house, care for her 1-year-old son Kristobal and work, on top of school. She was so busy that she often couldn’t find the time or energy to get online to do school work. Now, she feels more on top of her grades and thinks her son is getting a better experience.

“I feel more relieved instead of stressed,” she said. “It’s great to see him around little kids again and having fun.”

The return to campus also should help Eileen and Kristobal in the long run, said Stanton nurse Ashley LeCompte.

“It’s like preschool for them. It gives them a leg up for their education,” she said.

The parents also get a variety of insight into early childhood development and parenting from the paraprofessionals working with their children, said Ashley Rojas, who has worked in child care for the program for four years.

As examples, some parents want tips on breastfeeding or forming good sleep patterns, she said. This support is limited compared to normal times, since parents quickly drop off their children before heading to class due to COVID-19 social distancing practices.

But Rojas said she was still glad to be back on campus, supporting these young families.

“I love it,” she said. “All these teen (parents) usually don’t have this support.”