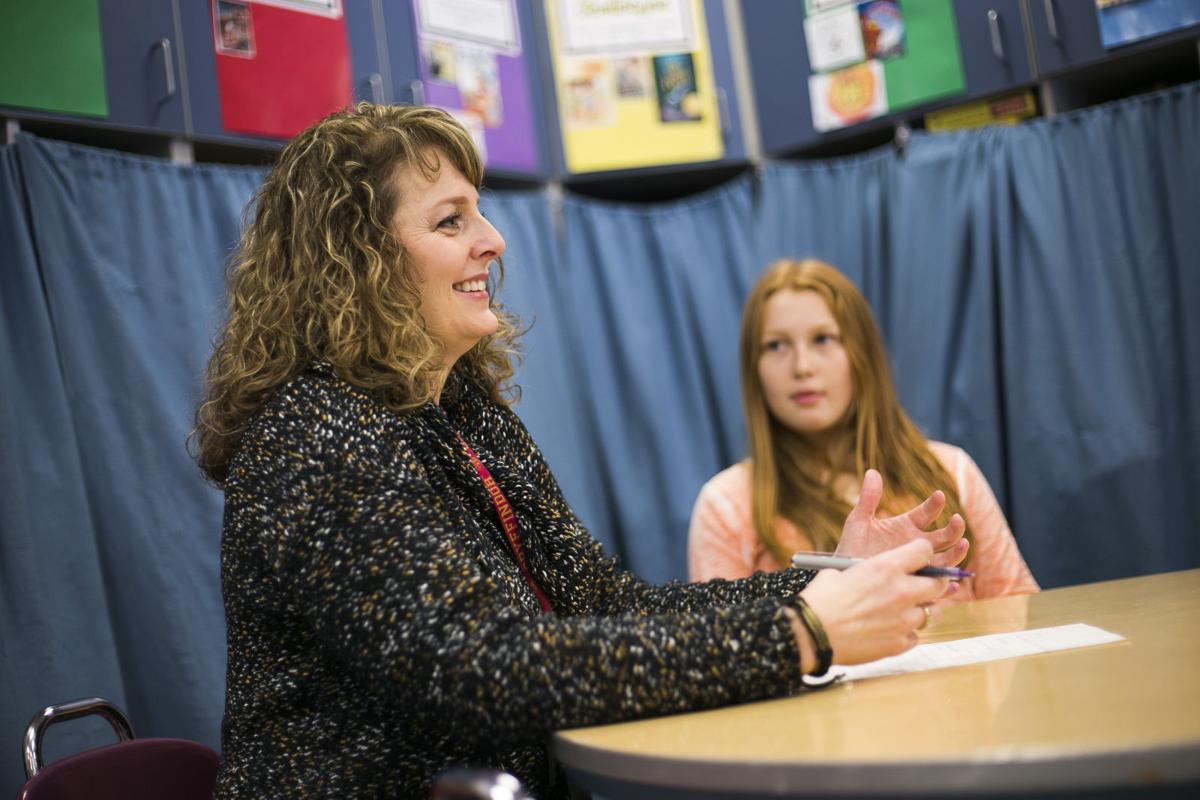 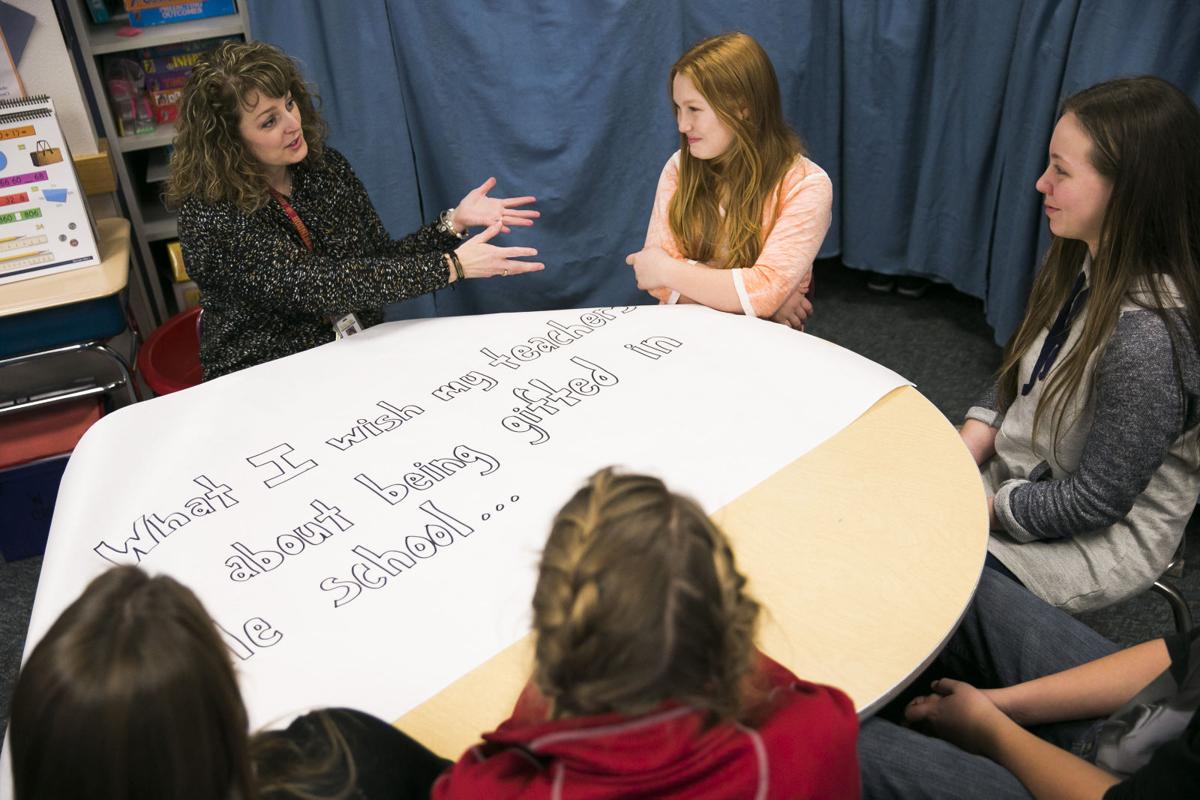 Naches Valley teacher Wendy Clark talks about some of the difficulties in being a gifted student during a 30-minute session with five seventh graders at the Naches Valley Intermediate School on Wednesday, January 13, 2016. The banner will be filled out filled with the students’ thoughts and feelings by the end of the school year. (MASON TRINCA/Yakima Herald-Republic)

Naches Valley teacher Wendy Clark talks about some of the difficulties in being a gifted student during a 30-minute session with five seventh graders at the Naches Valley Intermediate School on Wednesday, January 13, 2016. The banner will be filled out filled with the students’ thoughts and feelings by the end of the school year. (MASON TRINCA/Yakima Herald-Republic)

NACHES — Naches Valley teacher Wendy Clark unfurls a blank banner — well, a mostly blank banner. It has one lonely phrase: “What I wish my teachers knew about being gifted in middle school.”

Sometimes it surprises people that gifted students face challenges, too.

Clark knows. A teacher for more than two decades, she was labeled a gifted child.

“The number one myth is, ‘Oh, they’re gifted. They’ll be fine,’” Clark told her group of five Naches Valley seventh-graders on Monday. She is meeting with them during her prep time; Clark teaches third grade at Naches Intermediate School.

On this particular Monday, Clark met with them for the first time this school year. The 30-minute sessions will offer a chance for the students to open up about any challenges they face — challenges like wanting to jump ahead of teachers on assignments or trying too hard to be perfect.

“But the A+ just looks so much better,” Hayley Stohr, 13, tells Clark.

Her former elementary school teacher understands the sentiment, telling the five how she was a perfectionist growing up. Clark reassures them it is OK to fail every now and then — better to learn how to fail now than in college or adulthood.

Clark’s banner will be filled with the students’ thoughts and feelings by the end of the school year. Similar banners will be given to her fifth-, sixth- and eighth-grade groups, which she will also meet with every other week.

Her sitdowns with students show how school districts in Washington have ramped up efforts to accommodate gifted students. Once treated as an afterthought by many schools struggling with challenges of low-income students or the demands for special education, gifted programs — known in this state as Highly Capable — are now considered a basic service of public schools.

As recently as the 2012-13 school year, programs for gifted students were optional. But in 2013, the Legislature required all school districts to develop Highly Capable programs. Last school year was the first in which programs had to be fully adopted.

Programs locally and across the state took different approaches to meet the new statewide requirement. In Sunnyside, for instance, the Highly Capable program expanded beyond after-school hours. Elementary school students who qualify for Highly Capable have the option of enrolling in a mixed-grade advanced classroom. A third-through-fifth classroom exists at Chief Kamiakin Elementary School, where all three grade levels interact year-round.

Dealing with not only academically brilliant children but also differently aged children is not easy.

“We make sure our teacher has plenty of professional development,” said Cody Gardiner, the district’s special services director. “It’s tough.” The Highly Capable teacher has two paraprofessionals assisting him.

School districts must have K-12 programs in place, but how each grade level covers it varies by district.

Examples of Highly Capable programs include West Valley’s year-round third- and fourth-grade advanced learning classes at one of its schools. Selah, among other districts, has a program for third- through sixth-graders emphasizing the STEM subjects, as well as automatically enrolling its middle and high schoolers in advanced courses.

And according to its district policies, Yakima offers Highly Capable students advanced courses in high school, a middle school program and an art-integrated program in elementary school.

Sunnyside, for instance, received close to $60,000 of said money, Gardiner said. Yakima, given its larger enrollment size, received close to $160,000, according to OSPI. And on the other side of the spectrum in terms of district size, the smaller Naches Valley School District received about $13,000.

Most of the $160,000 in Yakima went toward the hiring of a professional development specialist and supplies, said Theresa Laffey, executive director of state/federal programs.

Most of the funding for gifted programs comes from local levy dollars or federal funding.

Thanks to the reauthorization of the federal K-12 education law this winter, now known as Every Student Succeeds, new options exist for schools to fund services for their gifted classrooms. For the first time, districts may use Title I funds, usually earmarked for their low-income student populations.

“There’s a recognition that we can do a better job at finding talent,” said Rene Islas, executive director for the National Association for Gifted Children.

His association last year surveyed states on gifted mandates and funding. Of 42 responding states, eight did not have a mandate in place, and eight that did require gifted programs provided no state funding.

“(Washington) acknowledged that they needed to do a better job,” he said.

Long story short: Everyone needs to do a better job identifying and assisting these children. Islas said brilliant kids and their talents go unnoticed, for whatever reason.

Teachers come into the discussion. Federal Title II funds, for instance, go toward professional development and can include the development of teachers in identifying gifted students.

Locally, Clark is hired by school districts to provide training to teachers on how to best identify potential Highly Capable students and how to best instruct them.

Many teachers just don’t know how to identify the talented, she said. The first thing she does in her trainings is debunk myths. Her experience growing up and being identified as one of these kids certainly helps, Clark added.

“It’s a huge passion of mine, having been identified as one ... I recognize the challenges and emotions and abilities they have,” she said.

One of those myths: These kids have it all together. That isn’t entirely true. Islas echoes similar opinions as Clark. Gifted students are more likely to act out and be disruptive because they are bored or have moved on from assignments, or because teachers ignore them for struggling students.

“They are leaving talented students in the upper range and don’t necessarily need to serve them,” Islas said. “There are myths within schools that students with these talents, that they can thrive on their own.”

Parents must give their consent, though, before schools conduct placement assessments and subsequently place the student into a Highly Capable program.