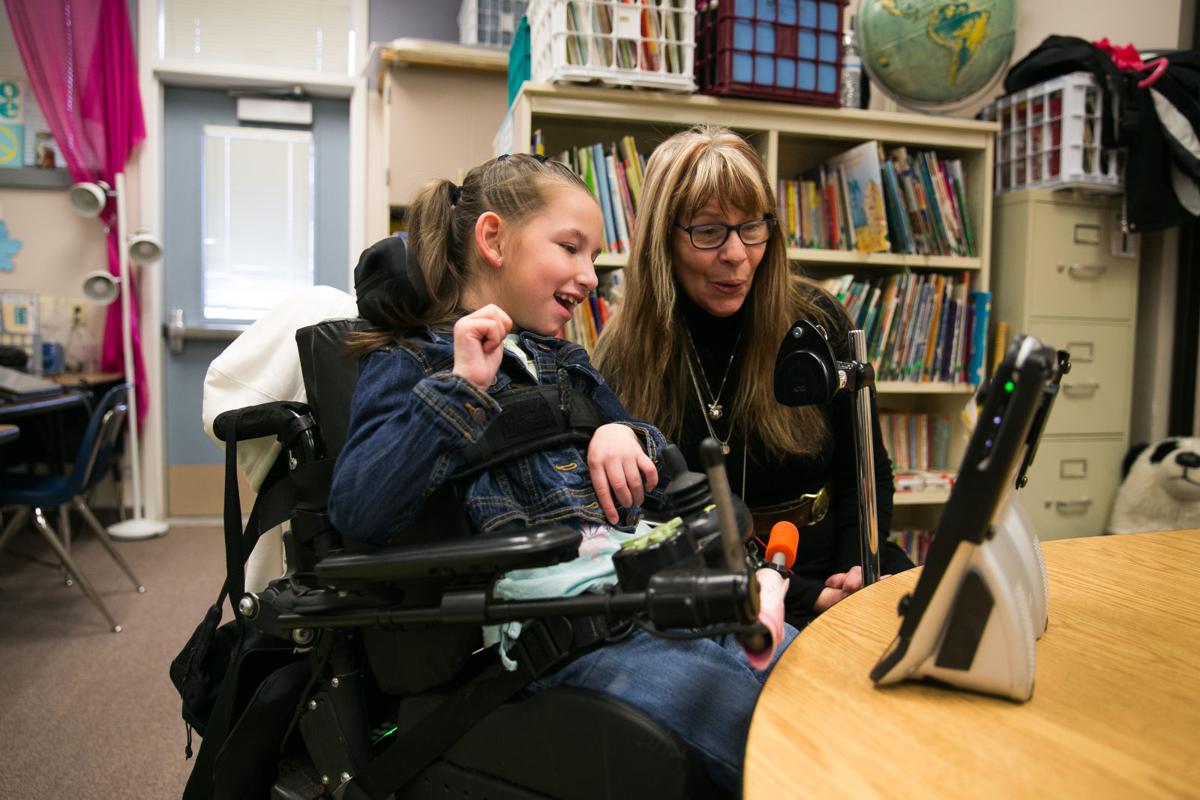 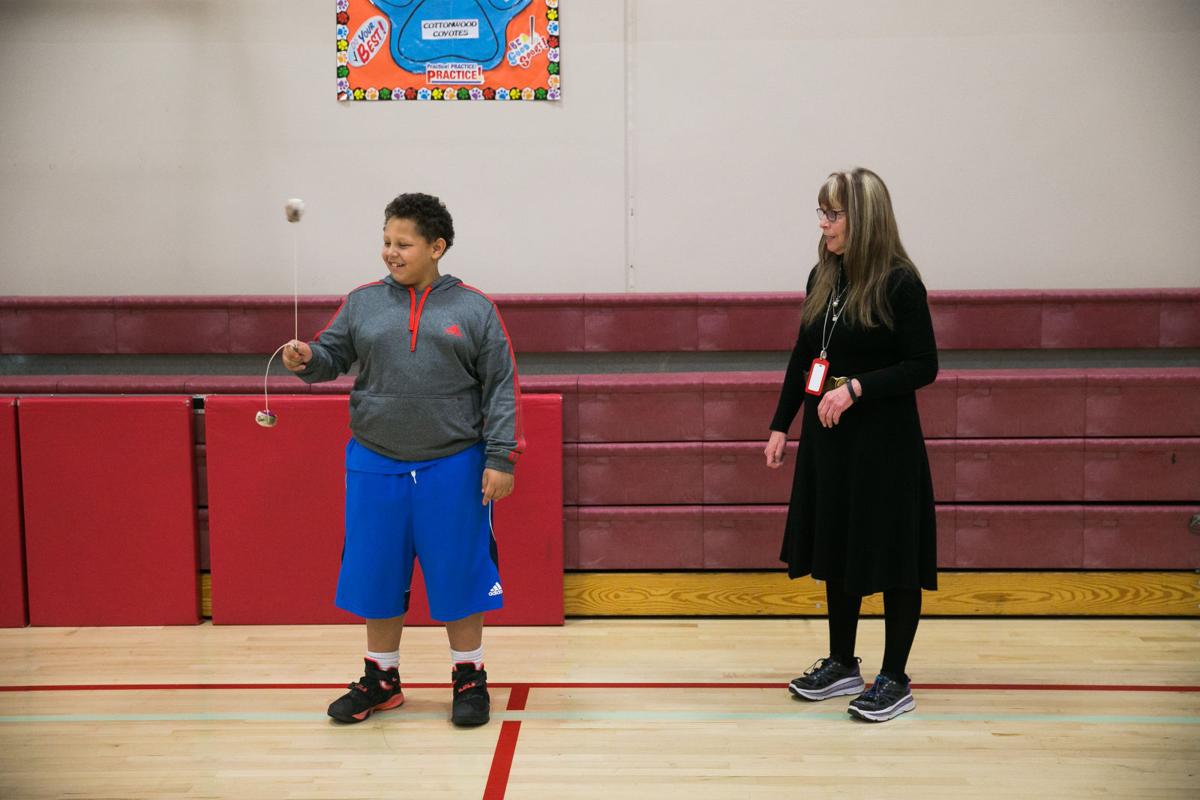 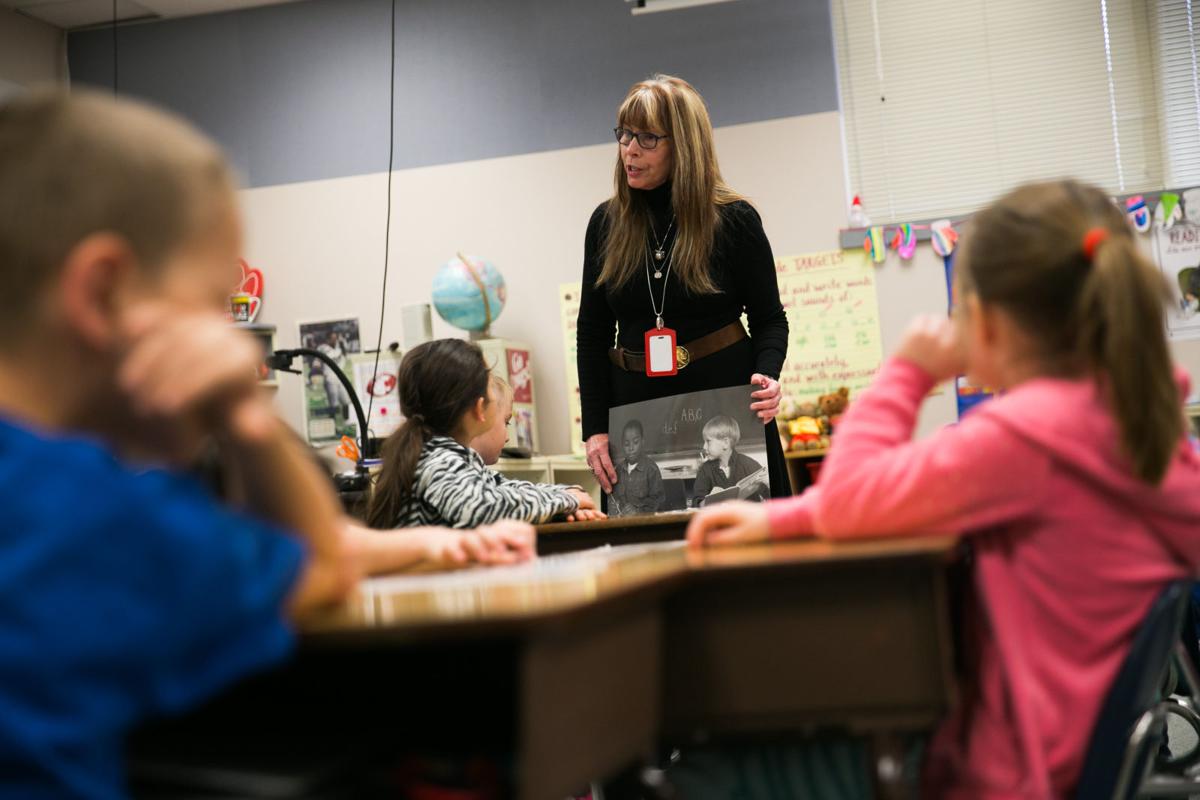 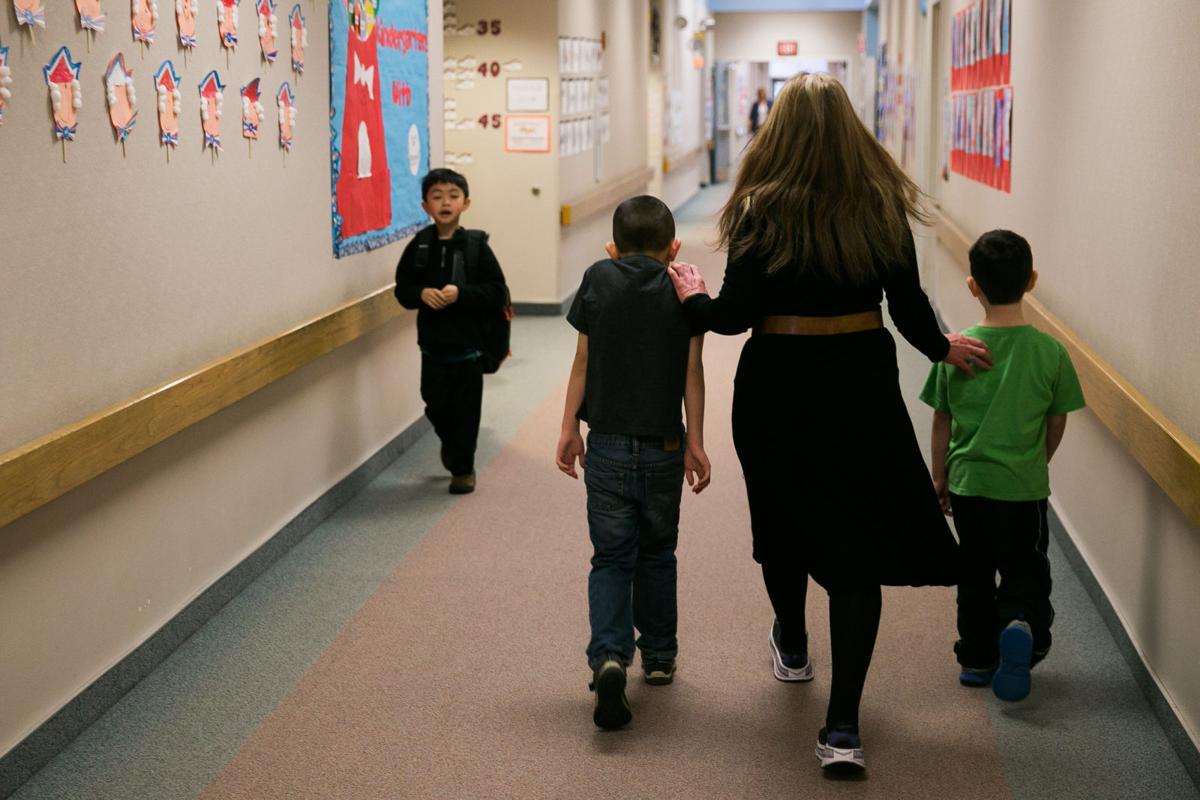 Jeanne Lancaster, Cottonwood Elementary School Psychologist, takes kindergarten students, Frankie Delarosa-Hall, 6, left, and Landon Ely, 5, right, back to class after taking a lap around the the gymnasium on Tuesday, March 1, 2016. Physical activity positively influences their goal-setting for the day and gets them to focus more in the classrooms. (MASON TRINCA/Yakima Herald-Republic) 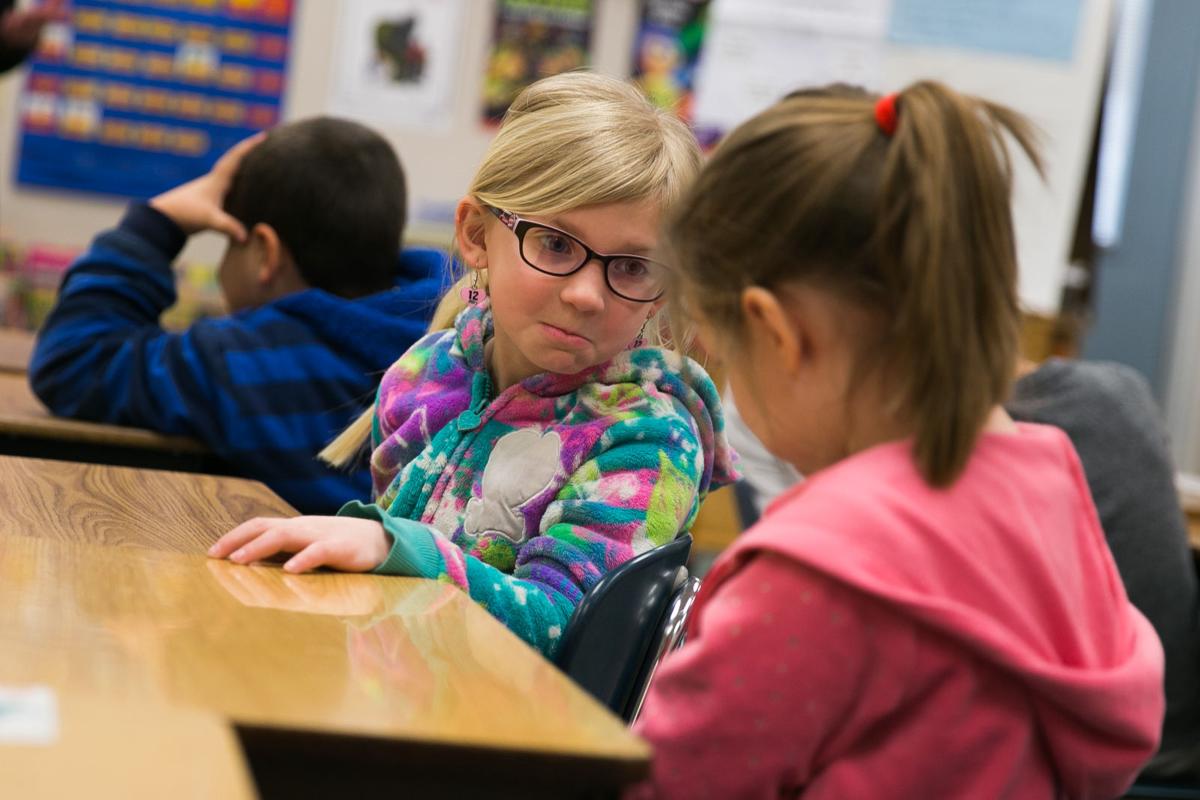 Jeanne Lancaster, Cottonwood Elementary School Psychologist, takes kindergarten students, Frankie Delarosa-Hall, 6, left, and Landon Ely, 5, right, back to class after taking a lap around the the gymnasium on Tuesday, March 1, 2016. Physical activity positively influences their goal-setting for the day and gets them to focus more in the classrooms. (MASON TRINCA/Yakima Herald-Republic)

As the school psychologist and counselor for Cottonwood Elementary in West Valley, Jeanne Lancaster relishes her varied days, which often begin with a quick visit with some of her students.

She’ll even take some of her youngest for a quick five-minute run. The run, Lancaster said, does the students good, as the physical activity positively influences their goal-setting for the day.

“They’re usually pretty worn out, but they’re ready and focused” after their quick workout, she said.

School districts locally and beyond covet employees like Lancaster because school psychologists — who among other responsibilities evaluate and identify and intervene with students with special needs — rarely become available and are hard to come by.

Lancaster said West Valley looked for more psychologists this school year, but none was available.

Psychologists join a growing list of school professions that are suffering from a crippling shortage of qualified professionals. That shortage also includes teachers, substitute teachers and bus drivers.

Yakima School District, for instance, employs more than a dozen psychologists across its 22 schools, including three preschool psychologists. But those psychologists say that number is not enough.

Five in the group were hired under contract from outside the district because there weren’t any candidates locally. Two come from as far away as Portland and even Chicago.

“One week a month, he comes in from Chicago, does the testing here and works from home,” said Yakima’s head psychologist, Dave Russell. “He can Skype for meetings from Chicago. It’s gotten to that point; we need them.”

Russell said the out-of-state contracts cost the district more than a typical hire, but are necessary to give students — particularly special education students — better access to services and to meet federal and state requirements.

“In three years, when the people retire, we will be about half-staffed unless we can attract others,” added Russell, who works mostly with students at Franklin Middle School and Davis High School. “What happens then?”

The National Association of School Psychologists reports there are about 38,000 school psychologists in the U.S. These professionals test students and collect data, provide direct support and intervention with students and parents, and coordinate Individualized Education Programs, or IEPs, with students with specialized needs and their families.

According to the Bureau of Labor Statistics, the mean wage for school psychologists in 2014 was $68,900. The median wage for industrial-organizational psychologists and others was more than $76,000. And the Bureau predicts the occupation will enjoy expanding job opportunities through 2022.

According to NASP, Washington and Oregon have only six graduate school psychology programs. But Massachusetts alone has six programs and neighboring New England states produce even more graduates.

“There are states in the East where there are an adequate number of psychologists,” said Katherine Cowan, a NASP spokeswoman.

She acknowledged the NASP is examining the psychologist shortage.

The NASP recommends a ratio of one psychologist for every 500 to 700 students. Cowan, however, said the ratios vary by districts and jurisdictions — the ratio is as high as one for every 6,000 in some areas.

Much like recruiting teachers, it then becomes an issue of how well a district pitches the Yakima Valley to prospective employees.

“They could pick anywhere they want (in Washington),” said Russell, noting many districts need psychologists. So the question becomes whether candidates prefer sunny skies to west-side weather, an urban or suburban setting or just what job offer sounds best.

A look across the state shows the extent of the problem. The Washington State Association of School Psychologists job board shows close to 100 postings from school districts and agencies — some of which are seeking multiple candidates.

“We have all the ones we need right now,” he said.

Lancaster has been Cottonwood’s psychologist/counselor for 22 years.

“The work is pretty stressful,” she said. “We follow federal and state guidelines. And in West Valley we have the dual model and it’s hard to split that time.”

Her duties range from greeting kids in the morning to meeting and consulting with teachers, dealing with crises and emergencies — even lunch duty.

“It gives me another perspective on students,” she said about the lunch hour.

The NASP agrees: It can be easy for the public to confuse school counseling with mental health. Counselors deal more with social skills when addressing student behavior, focus more on cultural aspects of their students, and are more likely to set up group sessions to address issues. Counselors also deal with scheduling and advising of courses, while psychologists do not.

“They’re more of a first line of defense,” Cowan said about school counselors.

“School psychologists’ skill sets (focus on) mental health,” added Cowan. “They can provide counseling, but they also do assessments for learning difficulties, (determining) what is the student’s particular needs. They typically are the more skilled using data.”

Much like other districts, West Valley also feels the pinch from lack of school psychologists.

Lancaster said interns are immediately moved up into full-time positions because there just aren’t other more experienced candidates available in the hiring pool.

There could be a number of reasons why school psychology is not attractive. Increasing workloads, more demanding standards, an increase in the number of special education students and better salaries working privately are just a few examples.

“I enjoyed teaching kids,” said Russell, who is a former substitute teacher. “But as a school psychologist you get one-on-one time. You have that time to give them evaluations, testing, you can do whole interviews with them, get to know them.”

Lancaster agrees, adding while her dual role may be demanding, she wouldn’t have it any other way.

“They do spark your day; (the kids are) refreshing, humorous,” she said. “Even when they’re challenging, they make your day.”