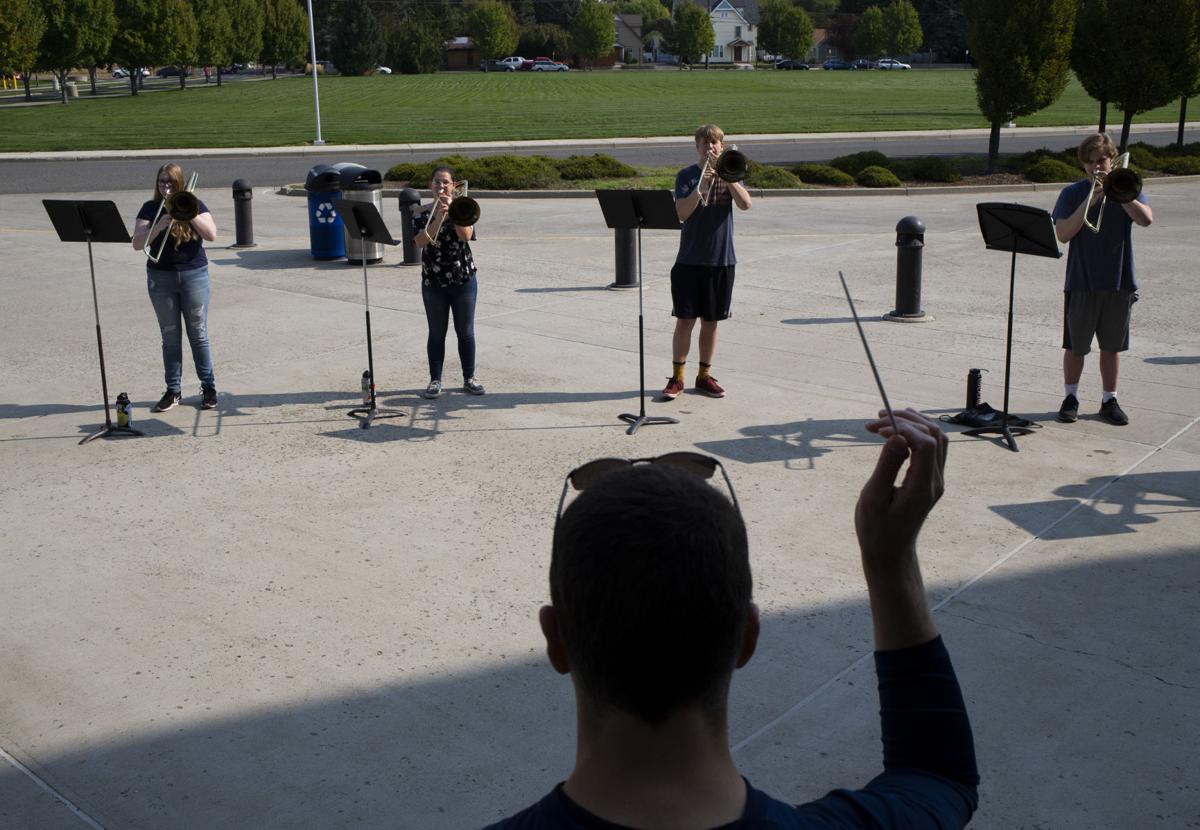 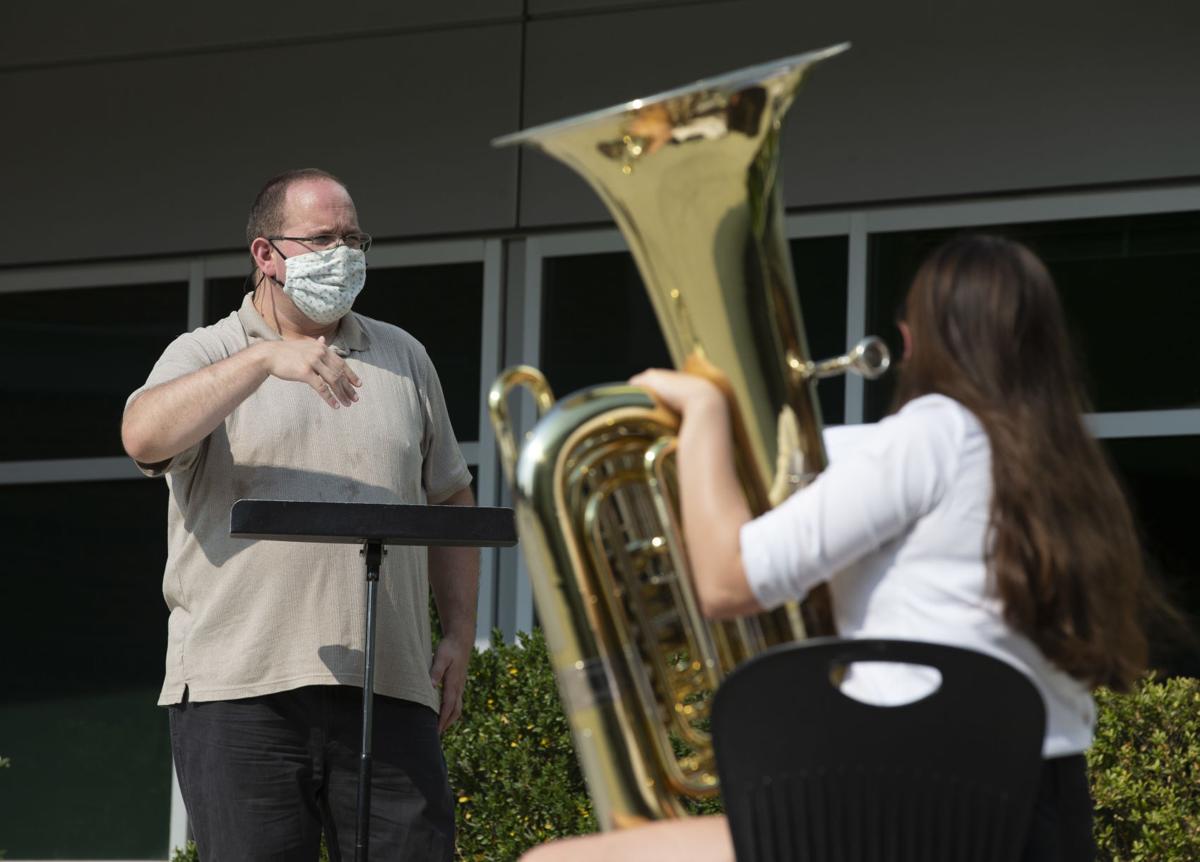 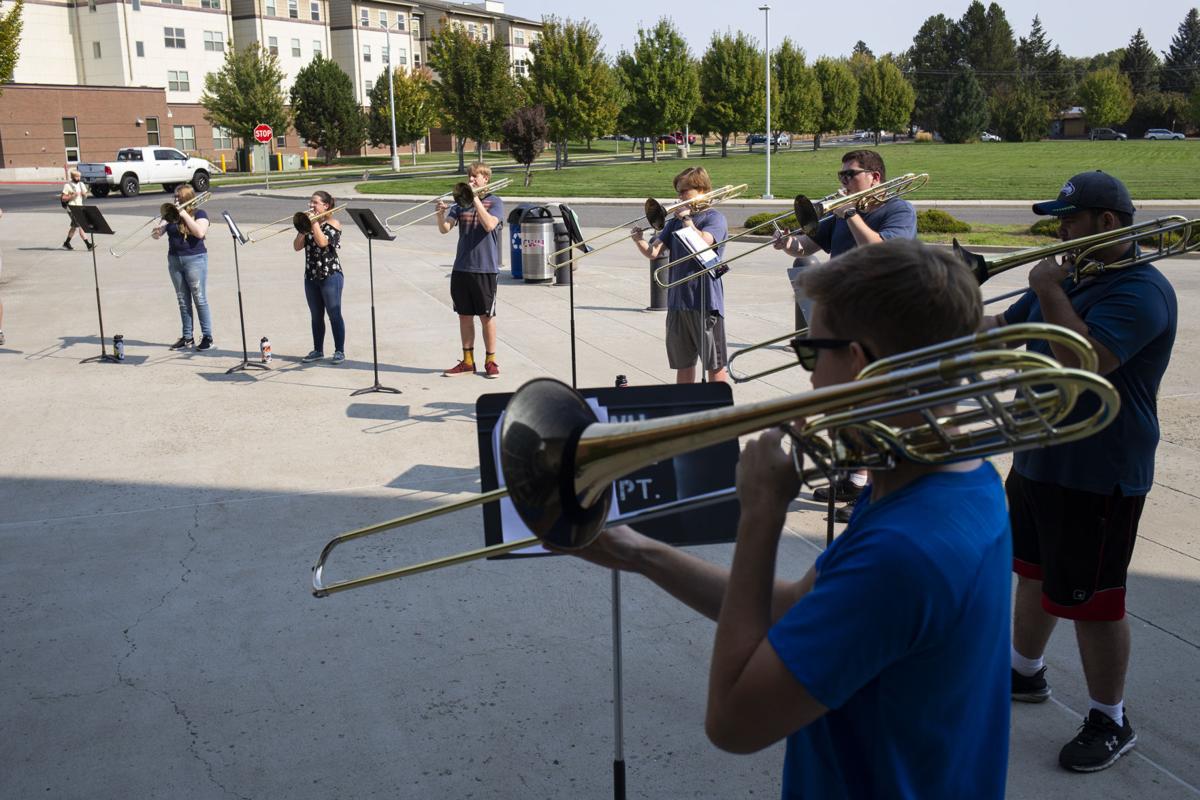 The Central Washington University trombone choir practices outside on Thursday, Oct. 1, 2020 in Ellensburg, Wash. The students had protective covers over the ends of their trombones to reduce risk of COVID-19 transmission.

The Central Washington University trombone choir practices outside on Thursday, Oct. 1, 2020 in Ellensburg, Wash. The students had protective covers over the ends of their trombones to reduce risk of COVID-19 transmission.

Trombone students have been standing 6 feet apart outside to play melodies together at Central Washington University this fall.

Musicians and accompanists are practicing in separate rooms, with the sound wired in between. Recitals will be small, with online streaming.

And on Thursday, the university’s theater department will bring live performance back to campus for the first time since schools closed this spring. The performers will act out Edgar Allen Poe stories inside McConnell Hall. The audience will walk around the building and watch through the windows.

Those are just some examples of how the university’s hands-on arts programs have adapted to the COVID-19 pandemic.

Staff say the challenges have been great. Arts that usually bring people together have been stifled, and some current teaching efforts are contrary to anything they’ve previously practiced in their careers.

The pandemic has also brought on new lessons and skills for both students and staff.

“When we’re challenged like this, people rise to the challenge,” said Todd Shiver, chair of the Department of Music.

Fall term is nearly complete at CWU, with the university moving up the start of the quarter so classes would conclude before Thanksgiving rather than in early December. Just 25% of courses have an in-person component, according to university officials — one of several big adjustments made to prevent the spread of COVID-19.

It poses more challenges for some programs than others. Teaching music, for example, can be hard when online streaming connections lag, Shiver said.

As a result, the department has more hybrid or face-to-face courses than any other department within the College of Arts and Humanities, he said.

Music classes where students are training to be a music teacher and must know how to play all the instruments are smaller by nature because the department only has so many trumpets and tubas for students to use. These classes have moved to large performance spaces where students can spread out, Shiver said.

Orchestras have been able to cut their rehearsal groups in half, to about 20, and practice with masks on, with 6 feet of space between students in the college’s large concert hall, he said.

Even in that case, in-person practices have been downgraded from five hours a week to 45 minutes. The rest of the time, the students have online assignments and “pass-offs,” which could be things like scales and rhythms, to work on independently.

The school has two floors of practice space that are open on alternate hours so the rooms have an hour to air out between users and can be cleaned. For students practicing pieces together, the university has wired several practice rooms so that a pianist and accompanist, for example, can hear each other from separate rooms and play simultaneously without a lag.

Even within the music department, some programs have fared better than others. Choirs are largely on hold. That’s because choruses have the “highest risk factors” for COVID-19, said Vijay Singh, a choral professor and jazz director at the university.

Both he and Shiver pointed to a church choir in Skagit County in which one person who unknowingly had COVID-19 infected 52 others in March. Two people died.

Singh also pointed to research being conducted by the University of Colorado on the risk of activities like singing, playing instruments and dancing on spreading the virus. While the Centers for Disease Control and Prevention recommends 6 feet of space between individuals to prevent the spread of COVID-19, the research suggests that “forced-air breathing” that occurs during these activities could spread droplets of the virus more than twice as far.

“We’re following the science,” Singh said. The result: “Singers have been all online, and they’re missing that camaraderie.”

Some students without prior training don’t know how to read music, so learning to sing new scores on their own isn’t feasible. Singh said he and two fellow choral instructors have instead focused their ensemble courses on providing engaging lectures on music history. Students receive one video every two weeks, to be viewed on their own time so they can focus energy on more demanding courses, he said. But students seem to appreciate that they’re still learning about something they’re passionate about, even if they can’t actively sing in a choir at the moment, said Singh.

“Maybe with a vaccine that will become a reality,” he said of returning to the risers to sing together.

In the meantime, he said enrollment in optional courses like jazz choir have seen a decline, with re-purposing of staff. Shiver said the number of music majors has remained steady.

In theater, professors and students also are aware of how a sickness can spread through a cast, said Christina Barrigan, chair of the Theatre Arts Department.

“Almost anyone involved in a show pre-pandemic has had the experience of a cold, flu or pinkeye running through an entire cast and crew, so we’re all acutely acquainted with how quickly that can spread through a cast if you’re not careful,” she said.

Many classes are taking advantage of online platforms and trying to cultivate collaboration between students by using virtual break-out groups. Monologues can also be conducted in an online format. And in a production course, students are developing and performing their own cabaret, to be recorded and potentially streamed later in the school year.

Some theater classes are being taught in-person or hybrid. In some cases, students in courses scheduled to be hybrid voted to move the class to in-person following strict safety protocol, Barrigan said. Technology is incorporated for students who can’t make it to class or are uncomfortable attending, and those who do attend go through steps like temperature checks, masking and social distancing.

In directing courses, students are challenged to explore ways to express intimacy, for example, without compromising physical distance.

“It’s a fabulous problem, because not everyone kisses when they’re like, ‘I feel really connected to you,’” Barrigan said.

Other students are learning to focus more on diction to be understood through face masks, she said.

Lab courses, like those that work on theater sound or lighting, have also become experimental, she said. They’re exploring things like how to project sound into different parts of a building. These solutions will be useful in the department’s upcoming production, “The Tell-Tale Gaze.”

Launching Thursday, the production is a series of scenes developed by students based on Edgar Allen Poe stories. It’s a project that began in the spring, pre-pandemic, and is the first live production since the pandemic began.

“He deals with fear of confinement, isolation, the effects of being trapped with another person and how that could change your attitude toward that person,” Barrigan said of Poe. The theme was initially thought to be fit for a Halloween production. Instead, she said, “we discovered how incredibly apropos some of those themes were to our current reality.”

The 14 different scenes will be acted out from within McConnell Hall. The sound will be projected outside. Audience members will walk around the building, looking in through windows at the scenes, she said. The pieces all fit together, but are not chronological.

While the professors expressed an initial disbelief in their ability to translate their subjects to a COVID-friendly approach, they each said there have been opportunities to grow from the experience. Barrigan described the situation as a seesaw.

“If you can let go of the hardness, you can see the opportunities,” she said. “But it’s a seesaw between, ‘Ah jeez, this is hard,’ (and) ‘OK, there’s an opportunity here.’ I think we’ve all been on a seesaw here in the last eight months.”

That may be the case, but it will come to an end eventually.

“This is a finite amount of time,” Singh said he tells his students. While society has become accustomed to instant gratification, this experience can be an opportunity to practice patience and discipline, he said, and “all those things that contribute to developing great young people.”