You are the owner of this article.
Edit Article Add New Article
You have permission to edit this article.
Edit
Home
News
COVID-19
Wildfires
Sports
Photos & Video
SCENE
Obituaries
Classifieds
Opinion
The Vanished
1 of 9 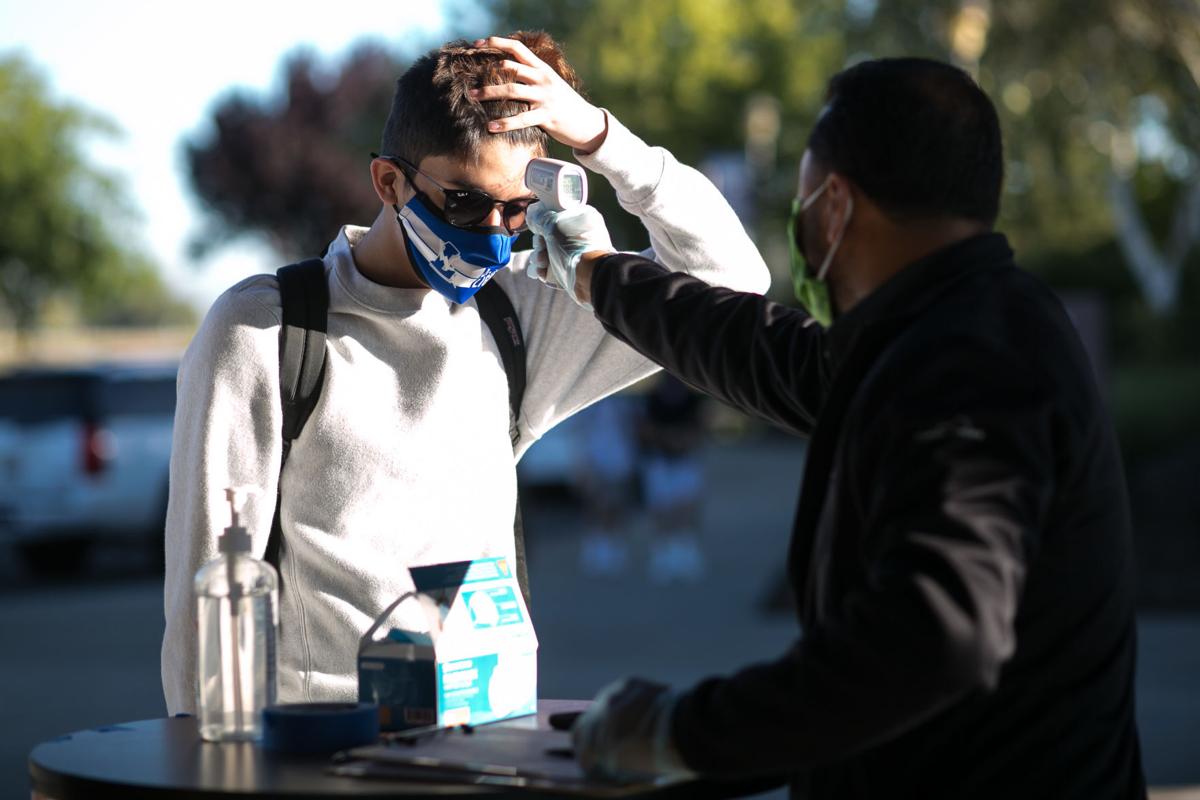 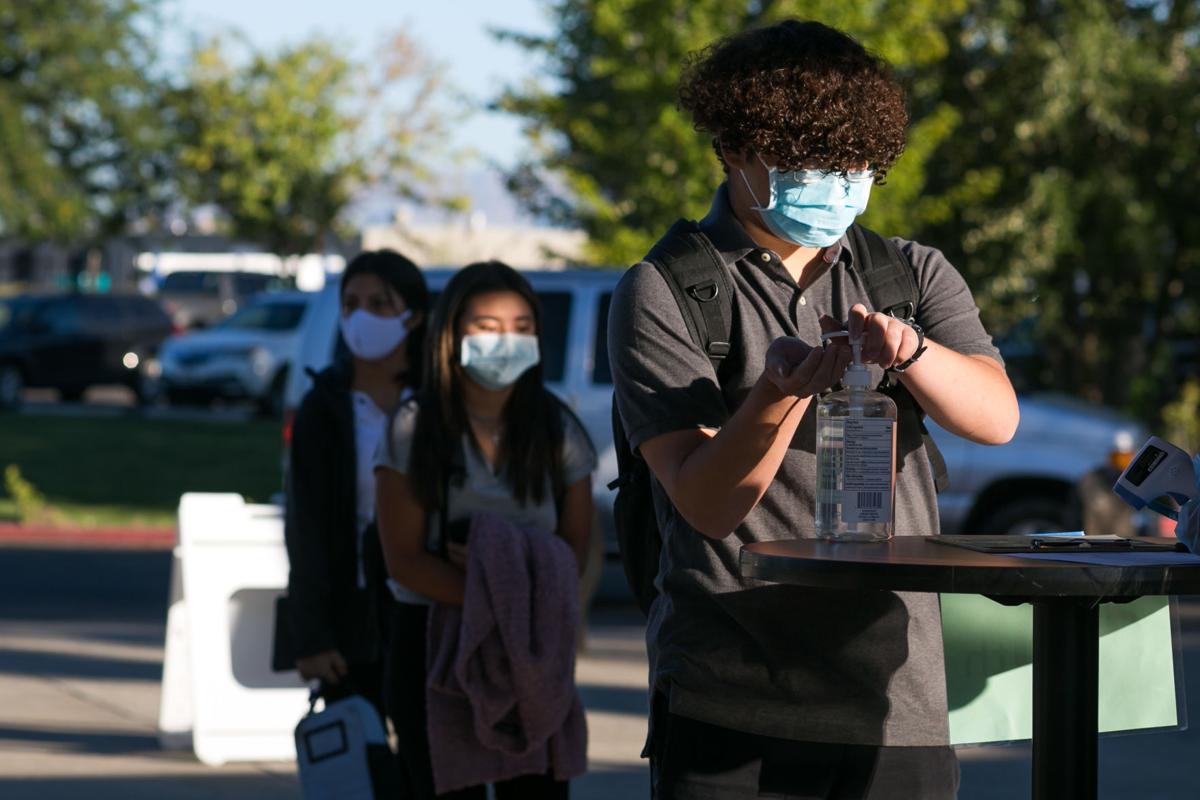 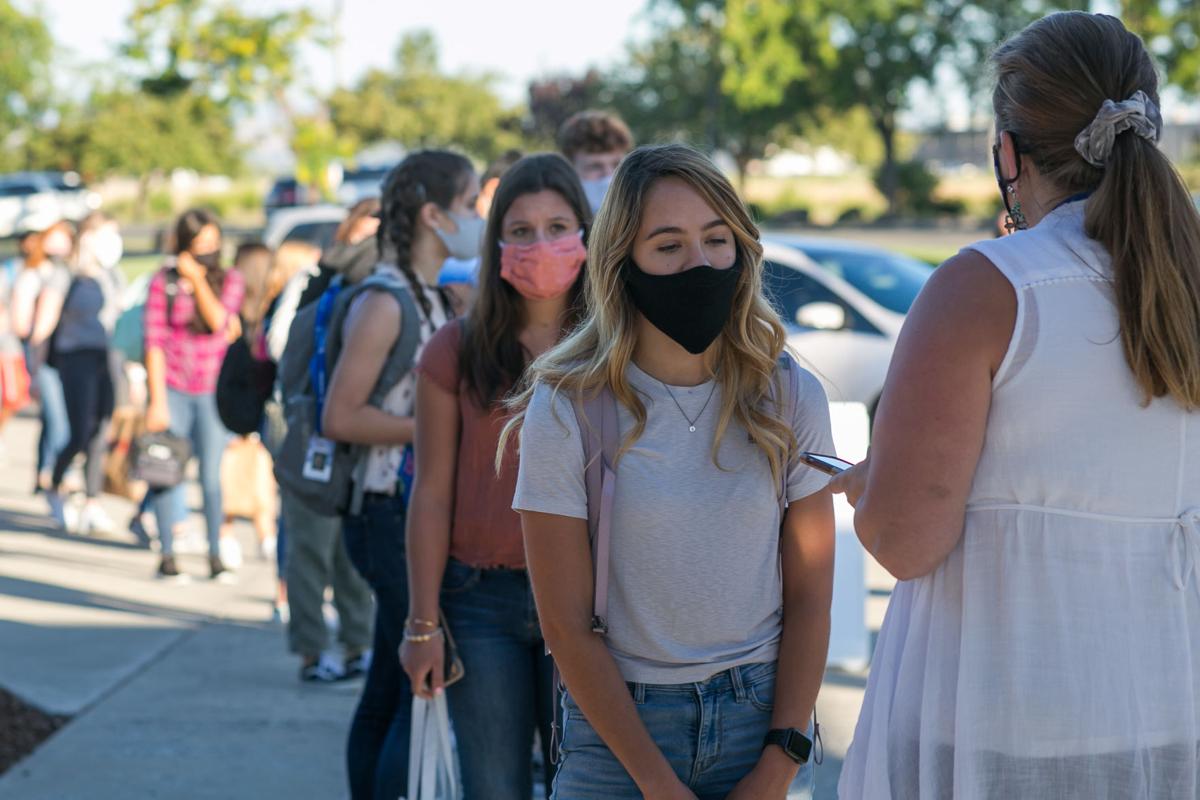 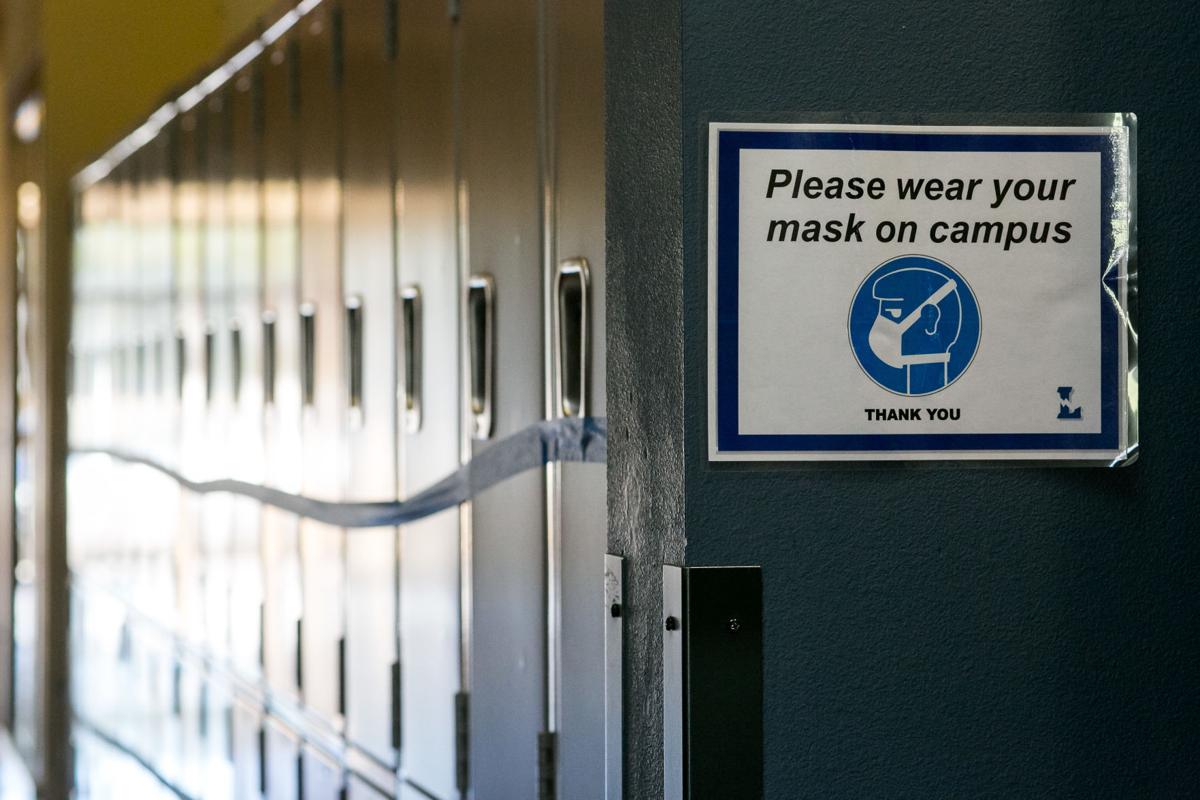 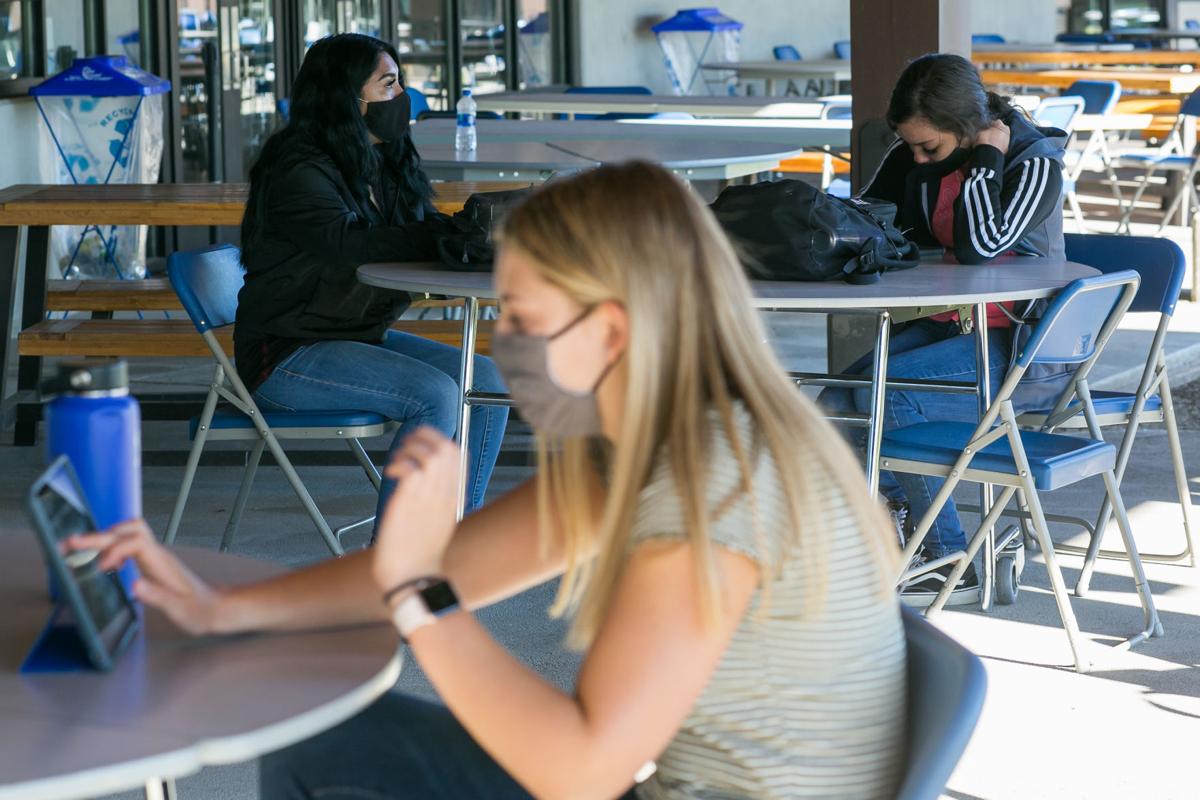 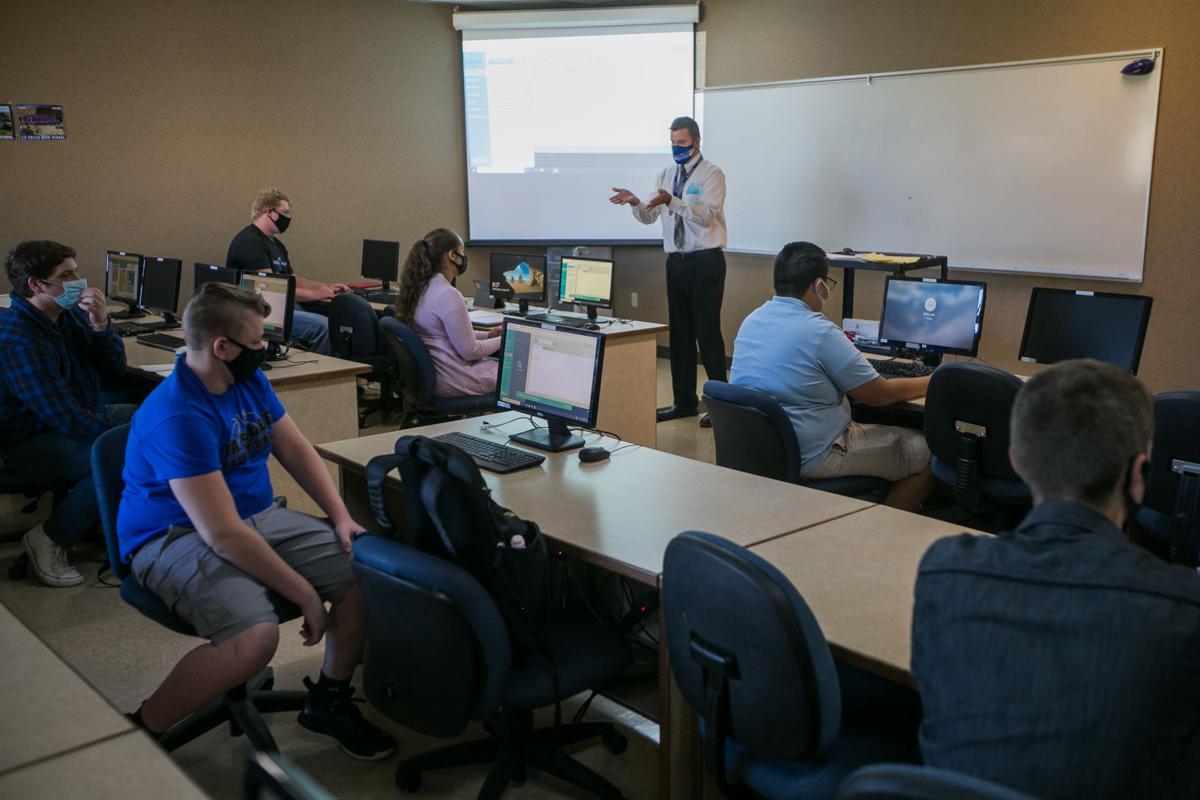 Students sit at the end of each desk to socially distance themselves during John Vavricka’s introduction to robotics course Wednesday, Aug. 26, 2020, at La Salle High School in Union Gap, Wash. 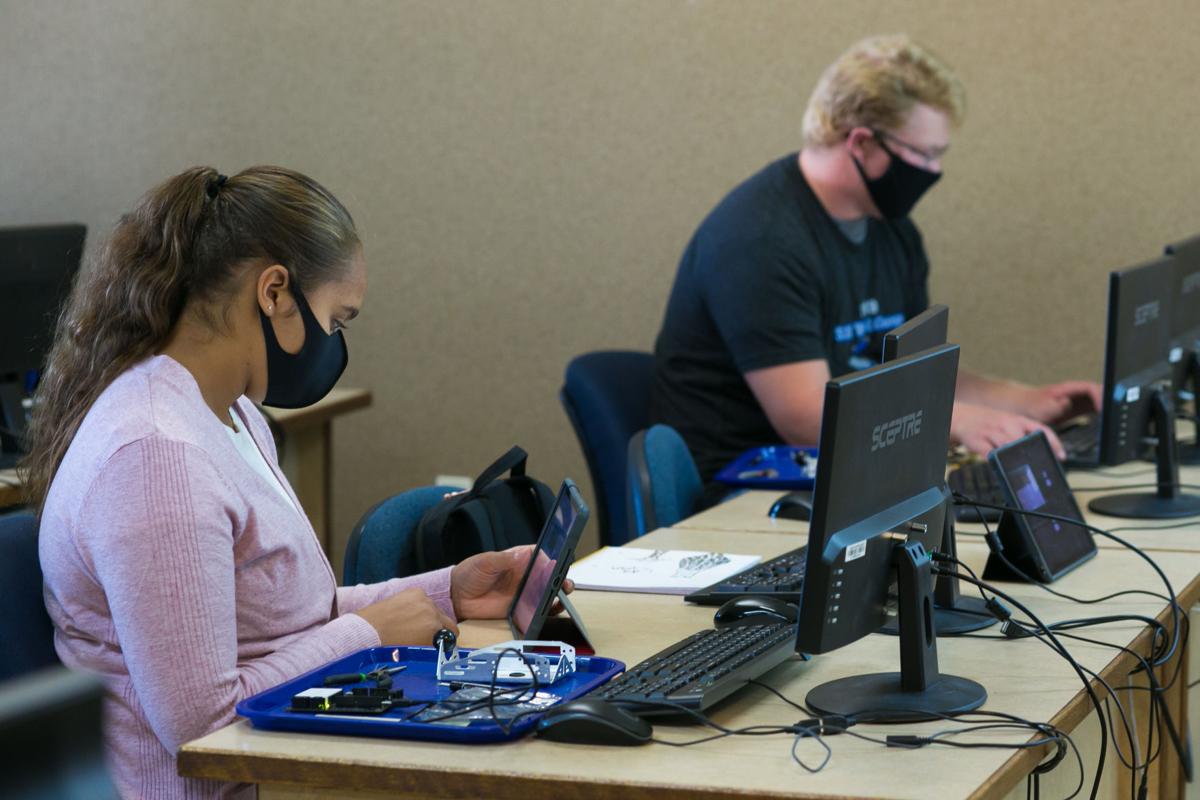 To socially distance themselves, Mataya Hull, left, and Garrett Judd sit at the end of each desk as they work on their tablets during an introduction to robotics course Wednesday, Aug. 26, 2020, at La Salle High School in Union Gap, Wash. 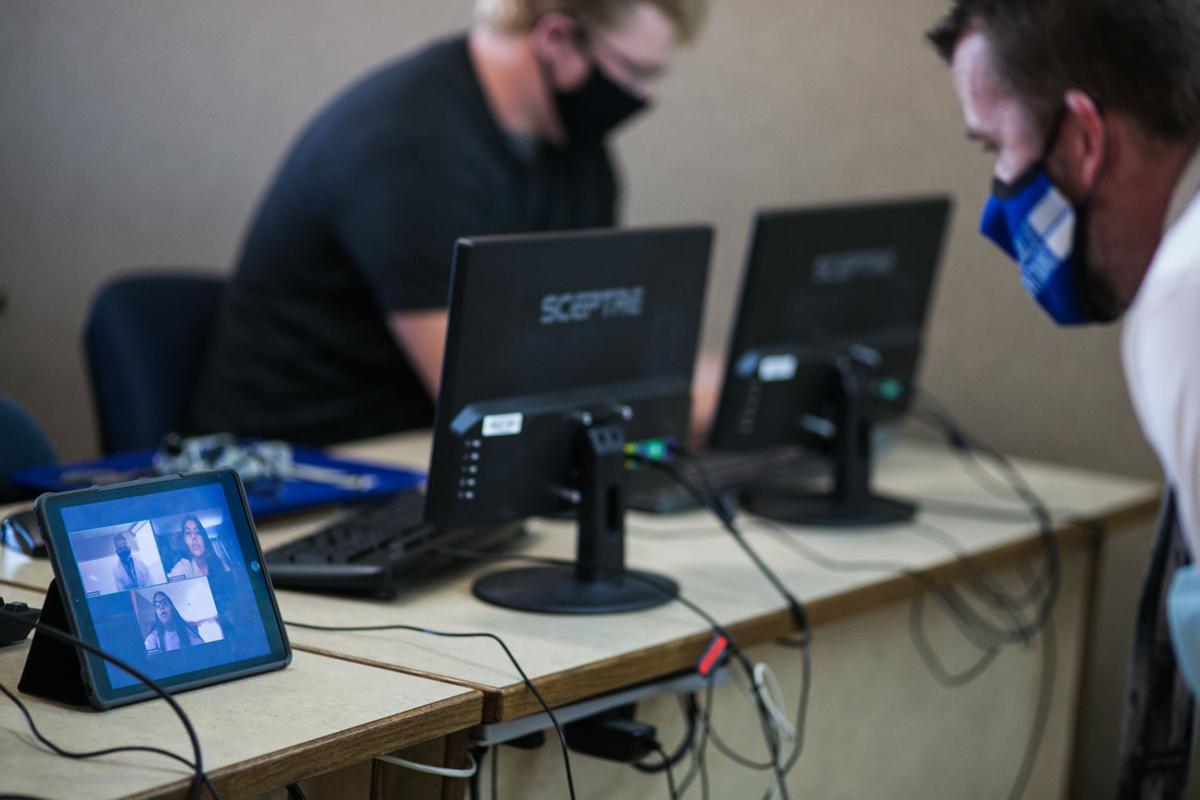 Educator John Vavricka speaks to students via Zoom during his introduction to robotics course Wednesday, Aug. 26, 2020, at La Salle High School in Union Gap, Wash. La Salle students are given the option to do in-person or virtual learning. 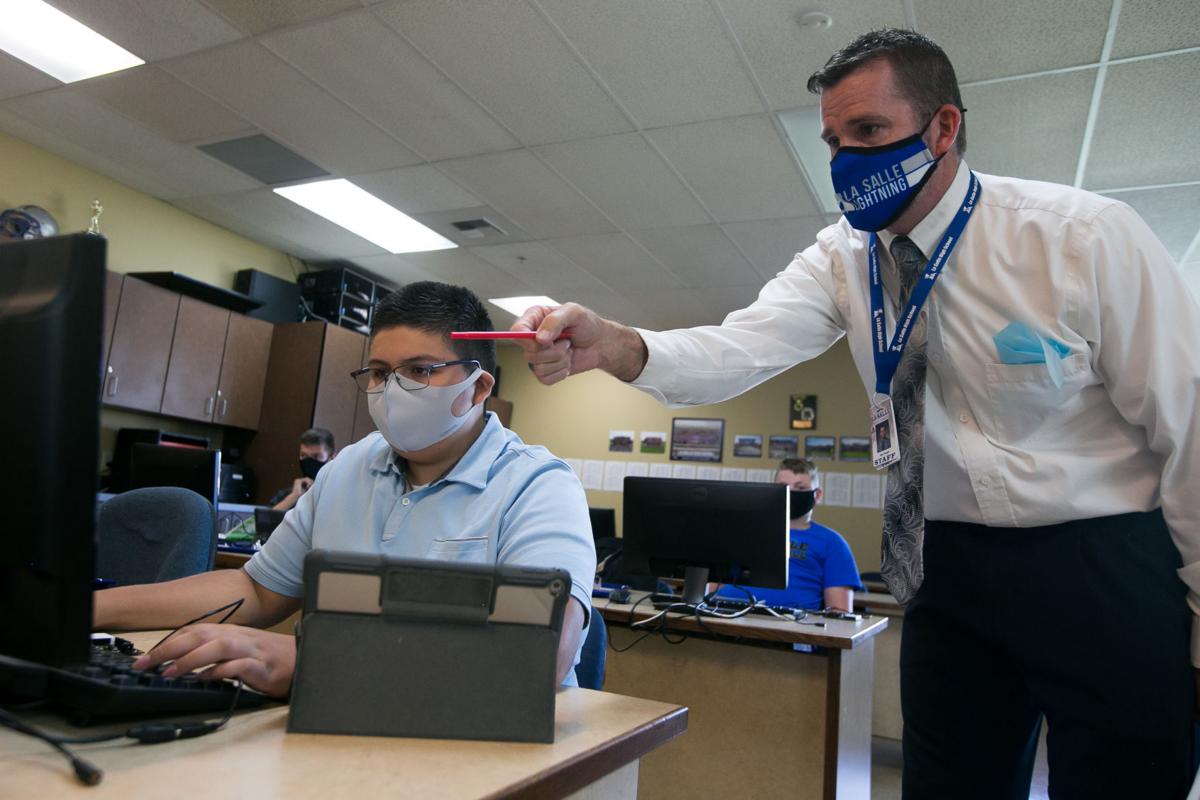 Students sit at the end of each desk to socially distance themselves during John Vavricka’s introduction to robotics course Wednesday, Aug. 26, 2020, at La Salle High School in Union Gap, Wash.

To socially distance themselves, Mataya Hull, left, and Garrett Judd sit at the end of each desk as they work on their tablets during an introduction to robotics course Wednesday, Aug. 26, 2020, at La Salle High School in Union Gap, Wash.

Educator John Vavricka speaks to students via Zoom during his introduction to robotics course Wednesday, Aug. 26, 2020, at La Salle High School in Union Gap, Wash. La Salle students are given the option to do in-person or virtual learning.

Before arriving, they each filled out a questionnaire: Did they have any COVID-19 symptoms? Did anyone in their household? Had they been exposed to anyone with the virus?

If they answered yes to any question, they would be required to stay home and watch for symptoms, or in some cases, get tested. Otherwise, they had their temperature checked at the entrance. If it was below 100.4 F, they could come inside to learn.

The roughly 220 students are the first in Yakima County to test the water of in-person learning, though public health guidance discourages the practice.

Earlier this month, Gov. Jay Inslee recommended that students not return to in-person learning unless a county has fewer than 25 newly confirmed cases of COVID-19 per 100,000 population in a two-week period. Yakima County had 186 new cases per 100,000 population from Aug. 5-18, which qualifies it as a high-risk community, according to the state.

The Yakima Health District has recommended online instruction until COVID-19 trends decline. As a result, all public school districts are starting the school year remotely.

But local private schools have decided to return to their school buildings. La Salle was first, kicking off the school year last Friday. Others, like Christ the Teacher Catholic School and Riverside Christian School, will resume Sept. 1, followed by St. Joseph Marquette Catholic School.

They have all worked closely with the health district to plan health and safety protocols, and have back-up plans in case an outbreak leads to a campus closure. They also have remote learning options for families who don’t feel safe sending their kids back to school yet. At La Salle, about 20 families have chosen the remote option.

“There’s no guarantee,” La Salle President Tim McGree said Wednesday morning as students arrived on campus, pointing to the possibility of an outbreak in spite of safety measures. “But we felt we needed to (return).”

The school is equipped for remote learning, and made an easy transition when schools statewide were mandated to close in the spring. It has had devices for each student dating back several years and distributed hotspots to families without internet. But McGree said school administrators believed the interpersonal connections and care that come with in-person learning didn’t translate online, and were too valuable not to give in-person learning a try.

This fall, the school has a point-person to oversee the health and safety measures and respond to each possible scenario if there is an outbreak, following Yakima Health District recommendations. If one person in the school community gets sick, a letter will be sent out notifying families, and those whose students were in contact with them will be notified and monitored, McGree said. If a second case is found, the school will begin isolating and quarantining portions of the school population — and so on.

For Eryn Garcia, a junior at La Salle, the return to campus brings mixed feelings.

“It’s kind of strange because I haven’t seen anyone in so long,” the 16-year-old said. “It’s strange being back around so many people. My first instinct is to go up to friends and start cuddling. But we can’t.”

Being around peers still has its benefit, she said, because they keep her motivated. But Garcia said she does feel a bit nervous about being back on campus, where she might be exposed to the virus if there’s an outbreak.

“Of course, I don’t want to get sick or get others sick,” she said.

Another student, Alex Bostos, 16, said he’s glad to be back on campus, but wouldn’t feel the same way if he attended a larger school.

“Running into 3,000 other people at other high schools is risky, because you can get sick,” he said. At La Salle, he said, the student population is small and students are determined to take safety measures seriously so they can “succeed through this pandemic.”

McGree said so far, things are going well. But it’s a work in progress, he said, as everyone adjusts to being around others amid tight rules.

Just before 8 a.m. Wednesday, students began to cluster together, forming a crowd after they had passed through the health check. That’s when Principal Ted Kanelopoulos chimed in.

In their classrooms, students are spaced six feet apart and class sizes are kept below 22. With Friday is the last day to change course schedules, Kanelopoulos said the school is still refining its numbers. But some teachers are taking on an extra period to bring down class sizes, and some have only a handful of students.

In a first-period robotics class at La Salle, John Vavricka has 10 students in-person, plus two that he teaches remotely by setting up a group video call of him lecturing. He said he was starved for social interaction over the spring and summer, and doesn’t think the students tuning in from home get the same connection to their class or learning experience. Still, a video connection is the next-best thing to being together in person, he said.

Vavricka tries to take safety measures seriously so he can keep teaching in-person, wearing gloves when he passes out materials for students and asking them to rotate leaving their desk when they need to go to the side of the classroom for supplies. Each teacher also cleans the classroom between classes, and a deep sanitation is done each night. The safety measures add a lot to his plate — from extra hours on email to the cleaning. But he’ll take it.

“It’s a small sacrifice for big gains,” he said.

That’s because public health research suggests that outdoor gatherings carry lower risk of spreading COVID-19 than those indoors because wind disperses droplets that carry the virus. This prevents it from building up and being inhaled, as it can be indoors. One Japanese study looking at 100 cases found that individuals are about 20 times more likely to catch the virus indoors.

So far, few teachers at La Salle have chosen to teach outside. But Kanelopoulos expects the number to increase as teachers grow familiar with their classes.

One teacher, Elise Tulloss, is already on it. On Wednesday morning, she sat outside with four students spaced out around her, learning from devices. They were the only people outside. Tulloss plans to teach all of her courses outside until the cold grows too uncomfortable. The science teacher said that’s not totally out of the norm. She usually takes advantage of the nearby Ahtanum Creek tributary to teach about plants and animals in their environment. This year, she’s just decided to do all the instruction outdoors.

“It’s about safety,” she said. “I’m really trying to keep people safe as much as possible.”

While Tulloss said she was very excited to be back with her students, she said the science was clear: “Studies have shown outdoor gathering is infinitely safer than indoor spaces.”

Classrooms are no exception. Already, schools in other states have seen large outbreaks from a return to in-person classes — from Florida to Indiana and Georgia.

Both McGree and Kanelopoulos said they were proceeding with caution.

“We’re trying our best to make this work,” Kanelopoulos said.

McGree echoed him: “We’re prepared, but hopefully we don’t see an infection.”