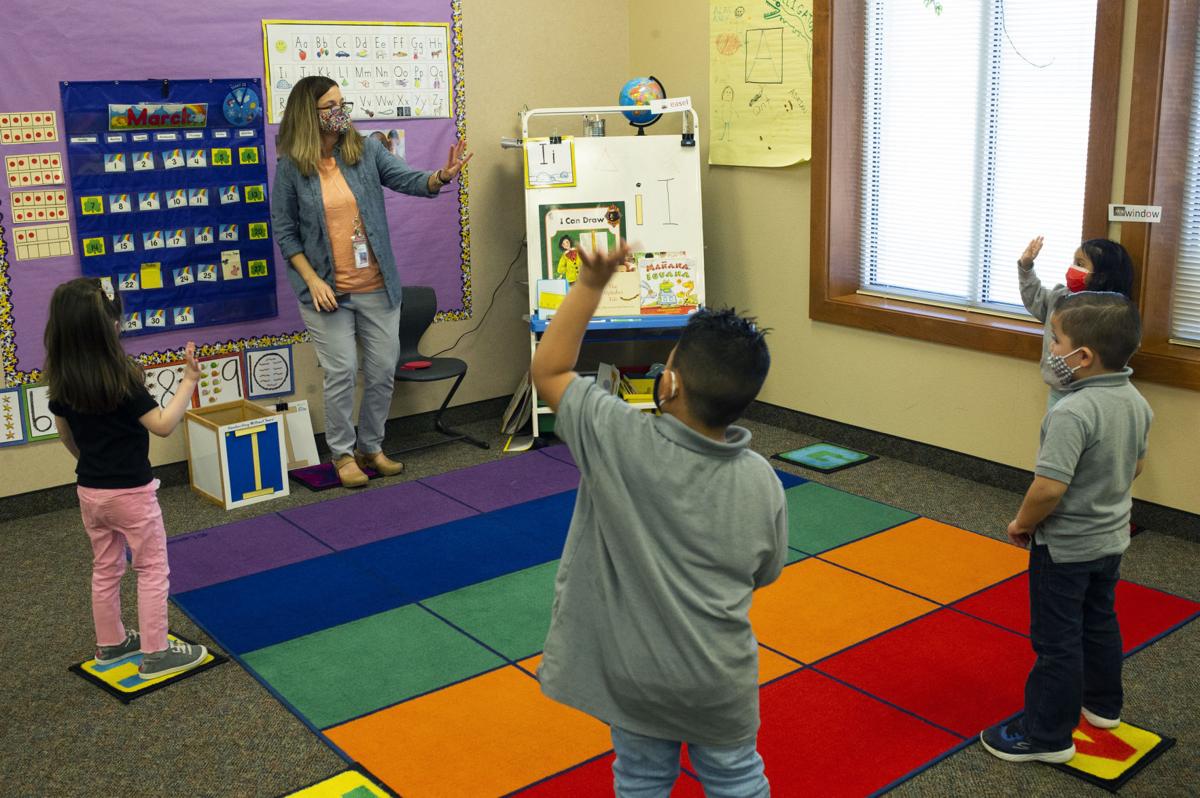 Laura Sullivan sings a song with her kindergarten students before a bathroom break at Union Gap School Tuesday, March 23, 2021 in Union Gap, Wash. 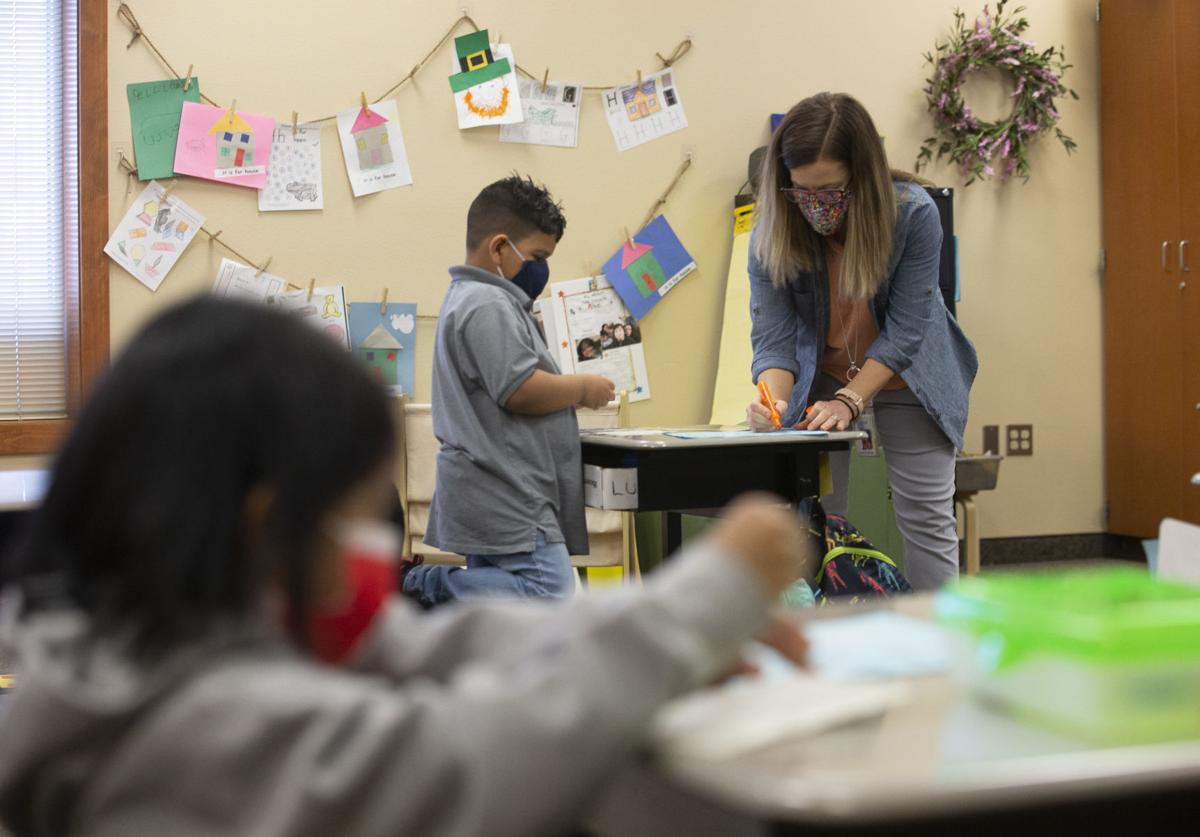 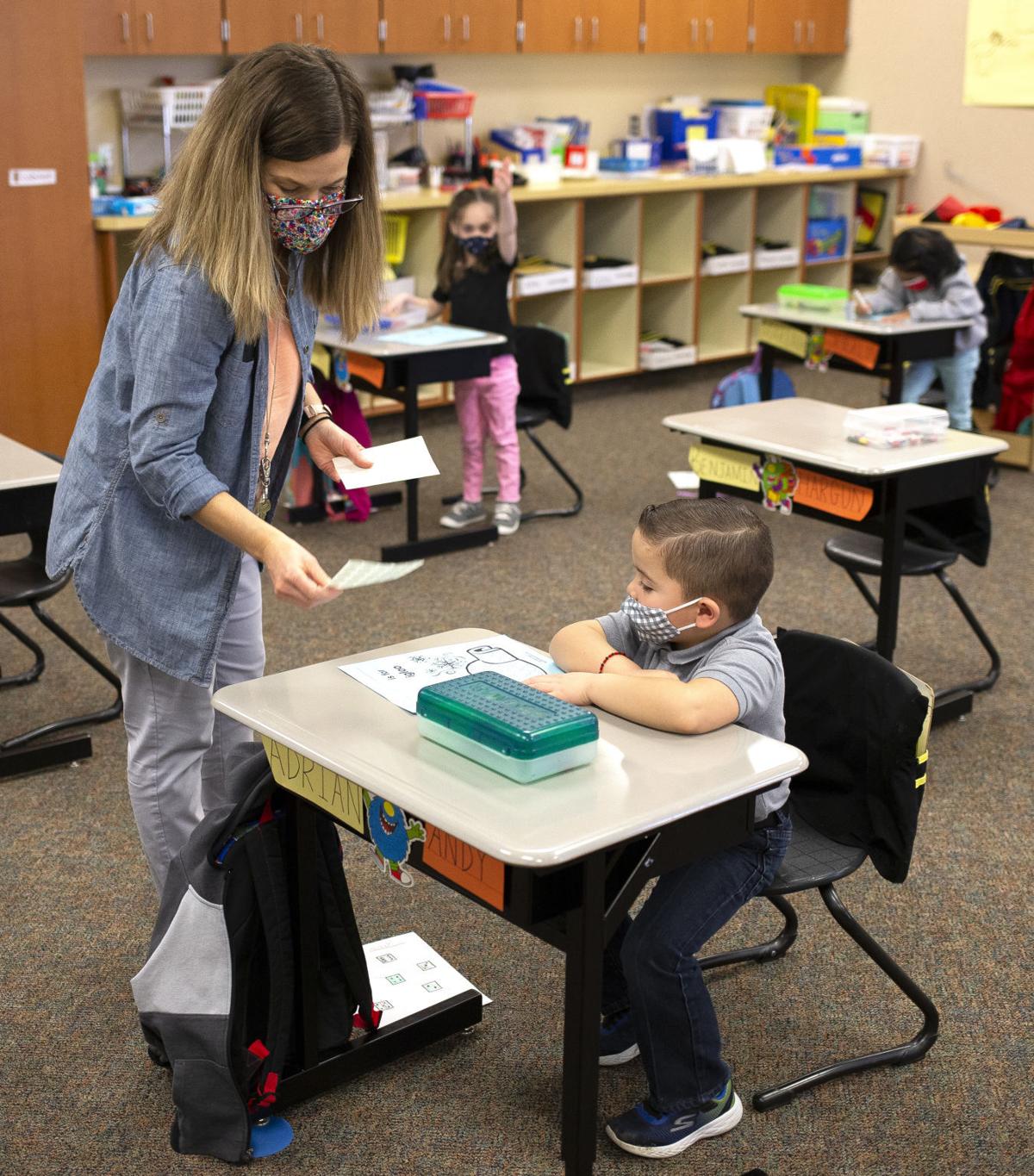 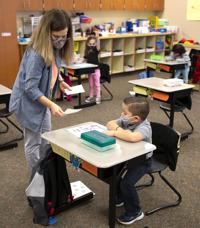 Laura Sullivan hands out an assignment to her kindergarten students at Union Gap School Tuesday, March 23, 2021 in Union Gap, Wash.

Laura Sullivan sings a song with her kindergarten students before a bathroom break at Union Gap School Tuesday, March 23, 2021 in Union Gap, Wash.

Laura Sullivan hands out an assignment to her kindergarten students at Union Gap School Tuesday, March 23, 2021 in Union Gap, Wash.

While the child care sector in Central Washington and beyond has weathered turbulence in recent decades, targeted programs offer pockets of hope.

Some address growing gaps in child care supply, which impacts both families’ livelihoods and the potential learning opportunities of their young ones. Others tackle learning disparities as a result of these gaps.

The efforts are intended to chip away at some of the underlying issues of the child care sector, even as lawmakers at the state and national level weigh bigger investments that might transform the industry.

Here are just a few of those home-grown programs.

For roughly six years, the state has had a substitute pool run by The Imagine Institute to enable providers to take time off for sick leave or credential training. All training to become a sub is done through the institute and paid for by the state. Rather than having to close their doors and lose a day’s income for training, sick leave or vacation, providers can bring in a substitute who meets state requirements in child care, CPR, health and food handling training.

While smaller-scale substitute pools and private coordinating networks have been around for decades, this was the first state-funded system in the U.S., according to the state Department of Children, Youth and Families. The state pays $15 an hour to subs covering a designated number of days allowed to providers through state law and union bargaining agreements.

State officials say this is a valuable service, since many providers can’t afford to lose a day’s wages to take time away. The long-term goal of the pool is twofold, DCYF officials say: have a substitute pool to support existing industry workers, and support the workforce pipeline by funding training for substitutes who might become full-time providers in the future.

Some providers and officials have said in the past that the pool isn’t yet large enough to support the substitution needs of providers throughout the state. But during the pandemic, The Imagine Institute has “supported a push for substitute recruitment which resulted in an increase (in) the number of qualified substitutes,” said Angela Abrams, a professional development administrator for DCYF. Abrams added that the body has increased options for remote substitute training and has also created new tracking measures to understand how providers are using subs.

Statewide, there were 478 approved substitutes as of late January, compared to 160 to 200 reported in January 2020. More than 600 individuals were pursuing their credentials around that time this year.

Four years ago, the West Valley School District in Yakima recognized a need for more early childhood education experts in the Central Washington region and developed a coursework pathway for students to become credentialed in the field. Using the standard for curriculum at the community college level, the district built a program in which high school students could complete a 12 credit initial early learning certification. From there, students can continue building upon early learning or education credentials post-high school.

About 20 West Valley students a year go through the program, the majority of whom continue in the field of education, said Chris Nesmith, the district’s director of innovation. About a third continue in early childhood education like child care, he said, helping to expand the workforce.

Partnering with the state Office of the Superintendent of Public Instruction, Yakima Valley College and others, a toolkit for high schools across the state to mirror the program was created.

While this could be part of the solution to the child care supply gaps, said Nesmith, more schools need to participate to make an impact.

“This program has eased the hiring gap, but not enough school districts across the state have adopted similar models,” he said.

Transitional Kindergarten is a program developed through a loophole in state funding less than a decade ago to bring children who haven’t had access to early learning opportunities into school classrooms prior to their first full year of kindergarten. They might have been on a child care waiting list or unable to afford a preschool program. Rather than spending 40 weeks in a regular kindergarten schedule, these students might get 60, since they get a jump start before their first full year of kindergarten.

The goal is to equip them with skills and classroom behaviors that will help them keep up with their peers and succeed in kindergarten. This might mean developing language and communication skills, learning how to count, or understanding how to behave in or navigate a school building.

Schools report impressive results: These students who would otherwise be behind their peers in development upon entering kindergarten become leaders in their classrooms and show steady academic growth. Schools see a reduction in teacher referrals for counseling, special education and discipline, as well as early intervention programs — meaning a reduction in school spending.

As more schools throughout Central Washington and beyond enthusiastically take on the program, both school administrators and early learning experts express a need for intention and collaboration in student recruitment. It’s a great resource for kids without access to rich learning opportunities prior to K-12, experts say. But schools should partner with existing child care and early learning programs to ensure the students being brought into Transitional Kindergarten are those who don’t have access to early learning — rather than potentially pulling children with access away from existing programs. Otherwise, some worry this program could inadvertently make the child care and early learning system even more fragile.

The Growth Gap is a Yakima Herald-Republic reporting series and newsletter on how Washington state’s declining child care sector is edging out young learners. We’re zeroing in on how this issue impacts children, families, providers and our economy in Central Washington, with an emphasis on long-term outcomes for early learners.

To sign up for the newsletter, go to www.yakimaherald.com/users/admin/mailinglist.

FROM WEDNESDAY: Why child care can be hard to find in Central Washington and how it affects families.