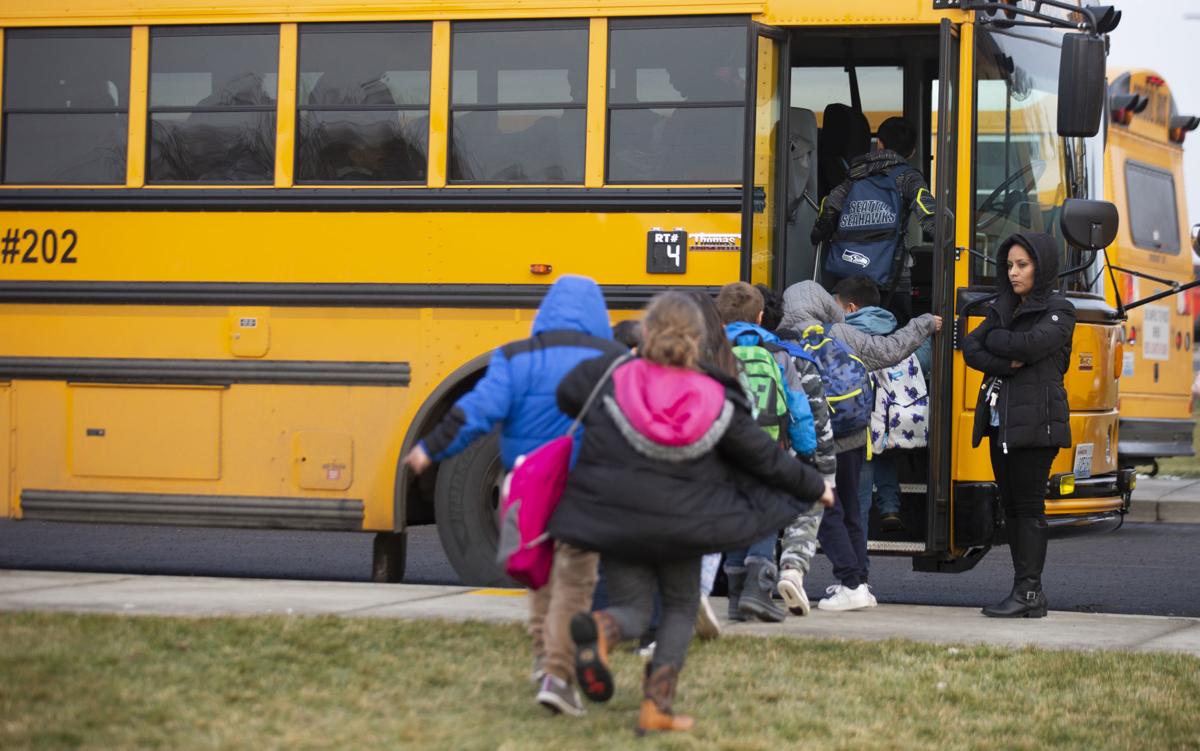 Kids board a bus at Valley View Elementary School on Thursday, Dec. 5, 2019, in Toppenish, Wash. 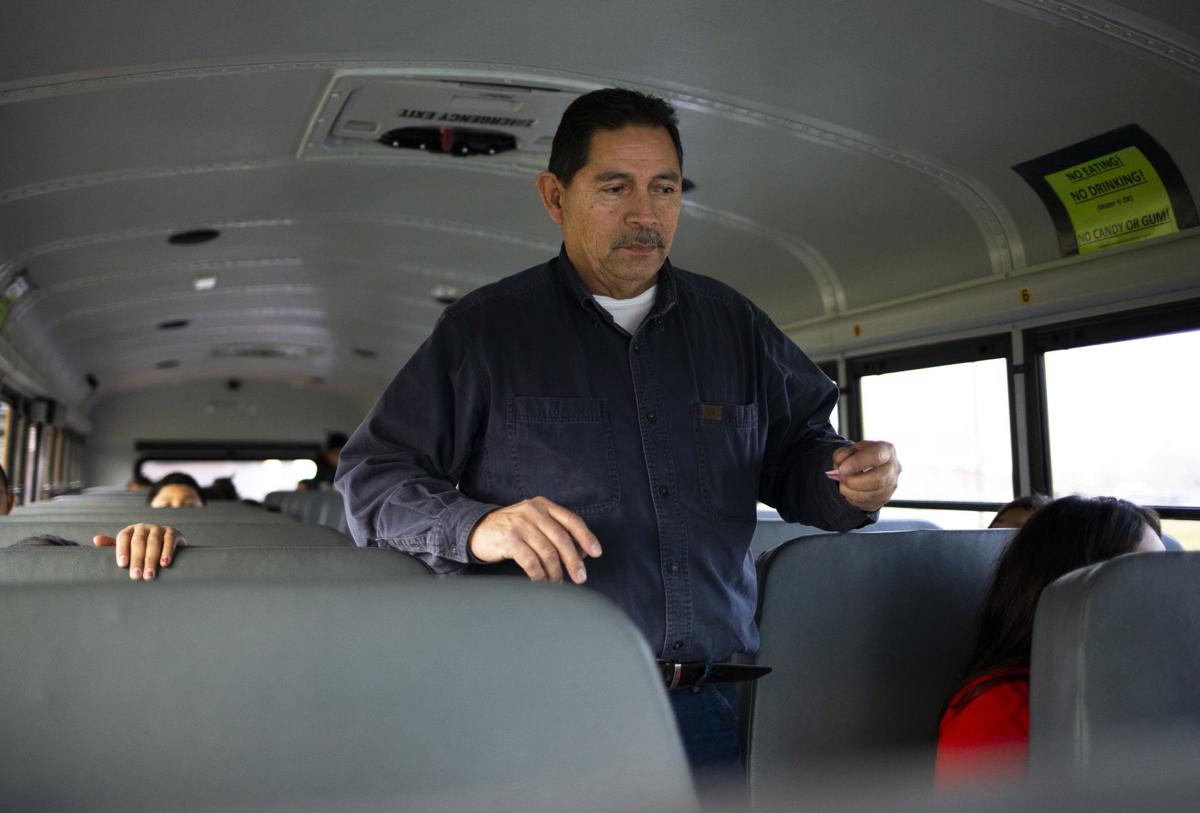 Daniel Perez, a Toppenish School District bus driver, walks down the aisle of his bus on Thursday, Dec. 5, 2019, at Valley View Elementary in Toppenish, Wash. 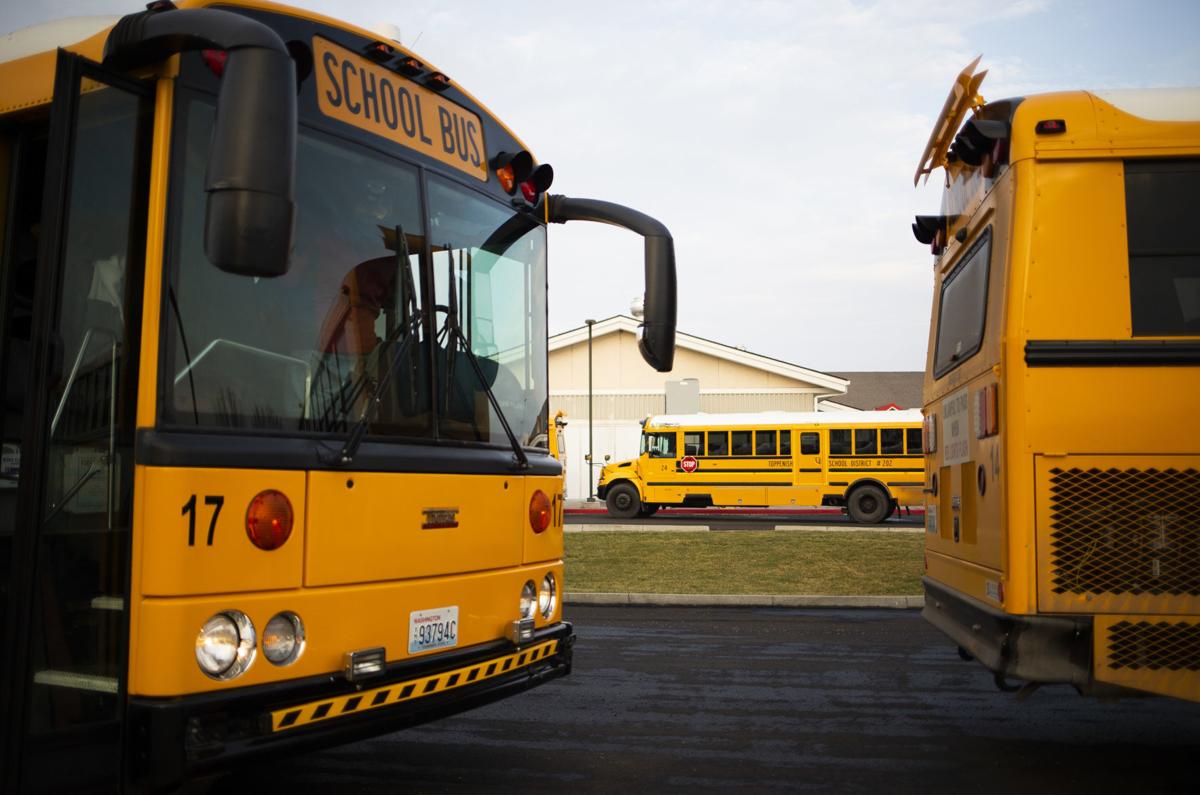 Kids board a bus at Valley View Elementary School on Thursday, Dec. 5, 2019, in Toppenish, Wash.

Daniel Perez, a Toppenish School District bus driver, walks down the aisle of his bus on Thursday, Dec. 5, 2019, at Valley View Elementary in Toppenish, Wash.

Each day in the Granger School District, seven dedicated school bus drivers transport roughly 700 students to and from school.

They’re among the first employees to start their school day and the last to finish.

Unlike many districts, Granger is able to give its employees full-time work. Several drivers double as custodians. They start the day by driving two hours and then take a midday break before returning to drive students home and do custodial work, said Steve Delarosa, director of transportation for the district.

When drivers are out sick or take leave, the district has four substitutes who help cover their routes.

Delarosa said recruiting subs isn’t a challenge because the community has a large agricultural base, and farmers with experience driving tractors are happy to drive school buses after harvest.

But Granger’s situation is an anomaly amid a national school bus driver shortage.

Of 15 districts countywide, Granger and Mabton were the only two to report little to no impact from the shortage. Others reported job postings with no applicant inquiries for up to eight years; having never filled a substitute driver position; pulling school employees from other positions to help cover routes during shortages; and delivering students to or from school late.

All 15 districts had bus driver job listings of some sort.

“This is harder than it has been,” said Robert Bowman, superintendent of the Naches Valley School District, one of the largest districts in terms of bus route distance statewide.

Naches Valley is short three regular drivers and has no substitutes.

“In the worst-case scenario, we have to call parents and let them know that they have to pick up their children. We’ve had to do that once this year already,” Bowman said.

While approximately 200 drivers transport Valley children to and from school each day, the pool of about 50 substitutes across all districts leaves most transportation departments in a pinch.

A 2018 national survey by industry magazine School Bus Fleet showed that more than 90% of school districts said they were impacted by a growing shortage of school bus drivers.

School Bus Fleet research links high employment rates to vacancies in school bus driver positions, which are predominantly part-time jobs that generally pay less per hour than commercial truck driving positions. The median pay for a heavy truck driver was $21 per hour in 2018, compared to less than $17 per hour for a school bus driver, according to the Bureau of Labor Statistics.

But several Yakima County school districts offer wages well above $20 per hour. In the Grandview School District, where 14 regular drivers are employed and four substitutes are on call, an advertisement on the district website offers training, route flexibility and $22.04 an hour for contract drivers, for example.

“You’ll always have somebody who is sick or one of their children are sick or something of that nature. … You’re always needing substitutes for one reason or another,” said Tom Biehl, the district’s head of transportation. “That’s tricky, but we do it and sometimes maybe kids end up getting home 15 or 20 minutes (later) than they should have or get to school with barely enough time to get to class, but we’re making it work. You get to be very creative.”

While the county unemployment rate has been higher each month since March compared to the same month the past two years, according to the state Employment Security Department, many districts reported this year being especially challenging for staffing school bus drivers.

To drive a school bus, there are a series of “hoops to jump through,” as several local transportation directors described it.

Local transportation directors estimated these steps cost upward of $400 to even become employable. Then, applicants are usually hired as substitutes until contract positions open up.

Most Yakima County districts offer incentives, such as paying minimum wage for training hours or reimbursing the cost of tests after a certain amount of time with the district. But that doesn’t always make a difference.

In the Toppenish School District, transportation director Blaine Thorington said he got slammed by the shortage this year. When he trained one driver to help quell the issue — a process that takes two to three months, he estimates — the driver worked one day in the district before taking a job in a neighboring district, forfeiting his reimbursement and leaving Thorington in a bind once again.

“That’s common,” he said. “It’s not unheard of. It’s something we fight, school districts. We deal with that all the time, so I am constantly training.”

Debbie Ekstrand, director of transportation at Zillah School District, said while it’s always been a struggle to recruit and retain drivers, this year has been the hardest.

In Zillah, just one substitute helps cover for all six regular bus drivers this year. Usually, she has three subs. But after roughly eight years of no replies to an online job posting, Ekstrand stopped paying for the advertisement.

On top of that, the district’s substitute is not available at all times, Ekstrand added. When the district finally did get applicants through word of mouth and began training them, several stopped showing up.

“I don’t know if they think it’s too hard or what. They just quit coming to class,” Ekstrand said.

Ekstrand said two potential drivers are in training, and she’s holding her breath, hoping they stick with the district.

In nearby Union Gap, Superintendent Lisa Gredvig said in her 11 years with the district, they have never had a substitute bus driver. An online listing for a substitute driver has been up for three years and never led to an application, she said.

“You can post and get charged a fortune for posting everywhere and get no applications,” Gredvig said.

Part of the issue might be increasing expectations from the state, said Jaimi Schmidt, director of transportation at West Valley School District, which she said has just recovered from a shortage of drivers.

She said the state is regularly updating expectations to tighten safety among drivers — something she thinks is a good thing but also a complication.

Local districts have taken a variety of steps to resolve their shortages.

The Selah School District has created a student leadership team in which students serve as substitute driver’s assistants, keeping students in order and guiding them through routes and bus stops. This is intended to make the job more enjoyable, and district transportation director Debbie Heide said it has made a significant difference.

Several other districts have tried to do what Granger has, combining school roles to give drivers full-time hours, making the job more appealing.

Some have asked office staff to become certified in case of a substitute shortage or an emergency. Others rely on mechanics or heads of transportation to drive when substitutes aren’t available, leaving the district vulnerable to incidents because a supervisor or mechanic wouldn’t be available to help.

Another option has been cutting out stops or consolidating routes. Others send kids home late, when necessary. But few believe these to be sustainable solutions.

“What I’m hoping at some point is to come up with some substitute co-op in our region and have everyone pool from the same substitutes,” said Gredvig of Union Gap. “But to do that when everybody is in the same position, it’s kind of difficult.”

This school year is the first that drivers are allowed by law to work for more than one district without having to go through the state authorization process with another district, said Patti Enbody, director of student transportation for the state Office of the Superintendent of Public Instruction.

“That saves a lot of time and money for the drivers and the district,” said Enbody.

But since its Sept. 1 implementation, she said she hasn’t received any feedback on whether that has lightened the burden of finding drivers or substitutes.

In recent years, she said the number of new drivers entering the trade and those leaving has remained steady — meaning the shortage hasn’t shown signs of shifting. But she said those who do choose to take on the job are fundamental to the school system.

“They’re driving our most precious cargo. They’re transporting our students,” she said. “I know a lot of people say that they wouldn’t do the job, but it just kind of chokes me up. I just appreciate every one of them.”

Schmidt of West Valley said the solution is clear: Districts need more people with a heart for helping kids to apply for these open positions.

“I don’t think people really understand how much training goes into these bus drivers and the education that they get before they go out on the road,” she said. “If anybody is interested, they can apply online at anybody’s school. ... Substitute bus drivers are needed everywhere.”