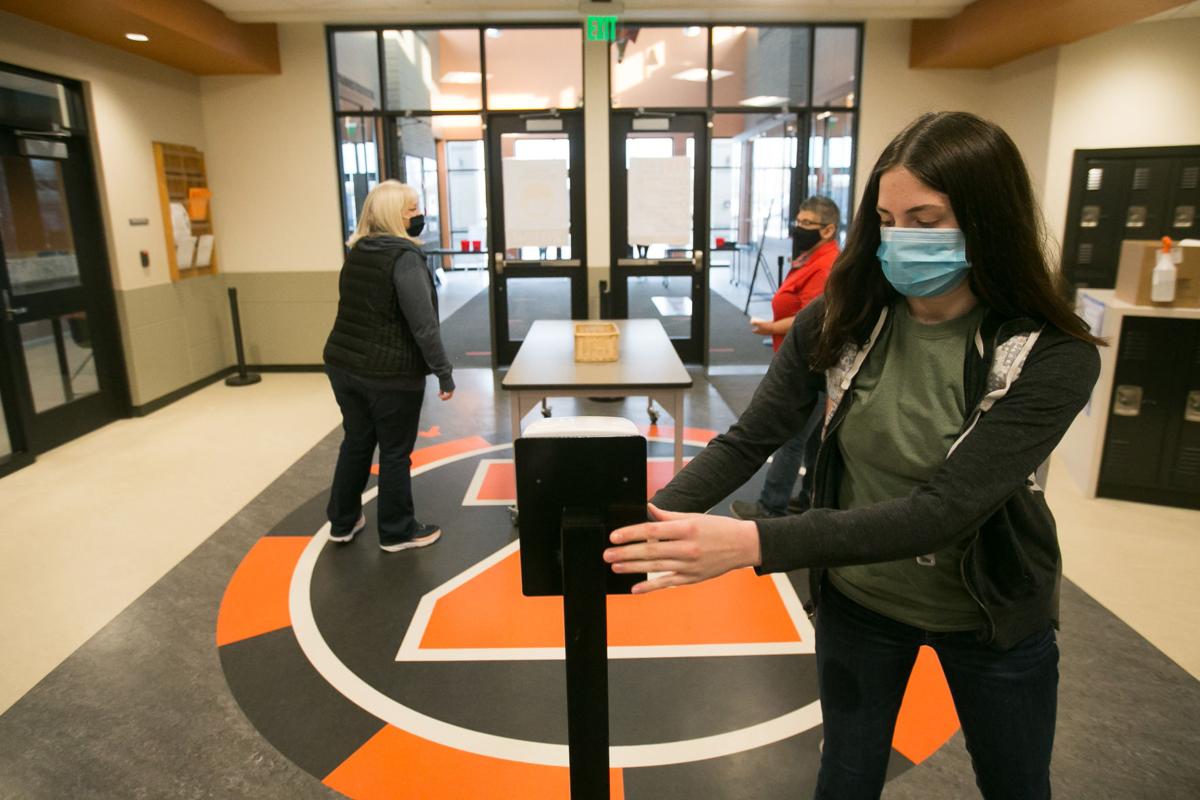 A student uses hand sanitizer at a health check stand before walking on school campus Monday, March 1, 2021, at the front entrance of Zillah High School in Zillah, Wash. 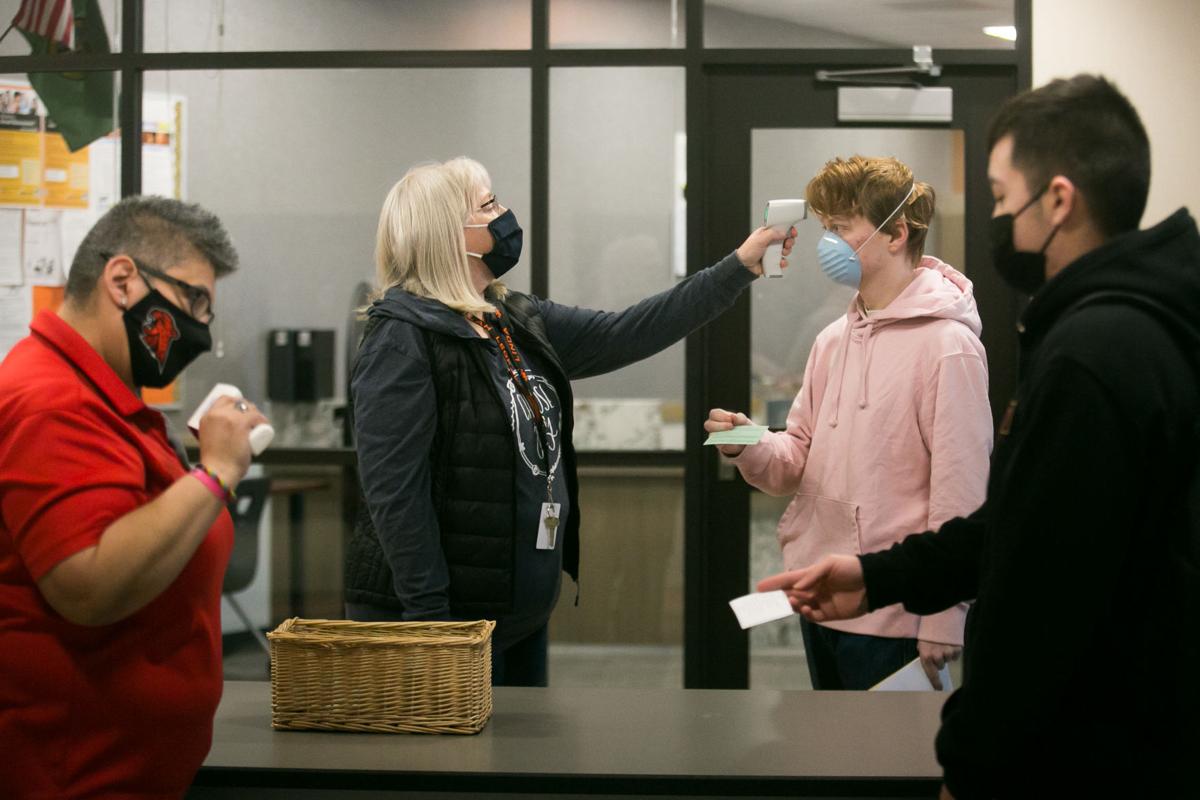 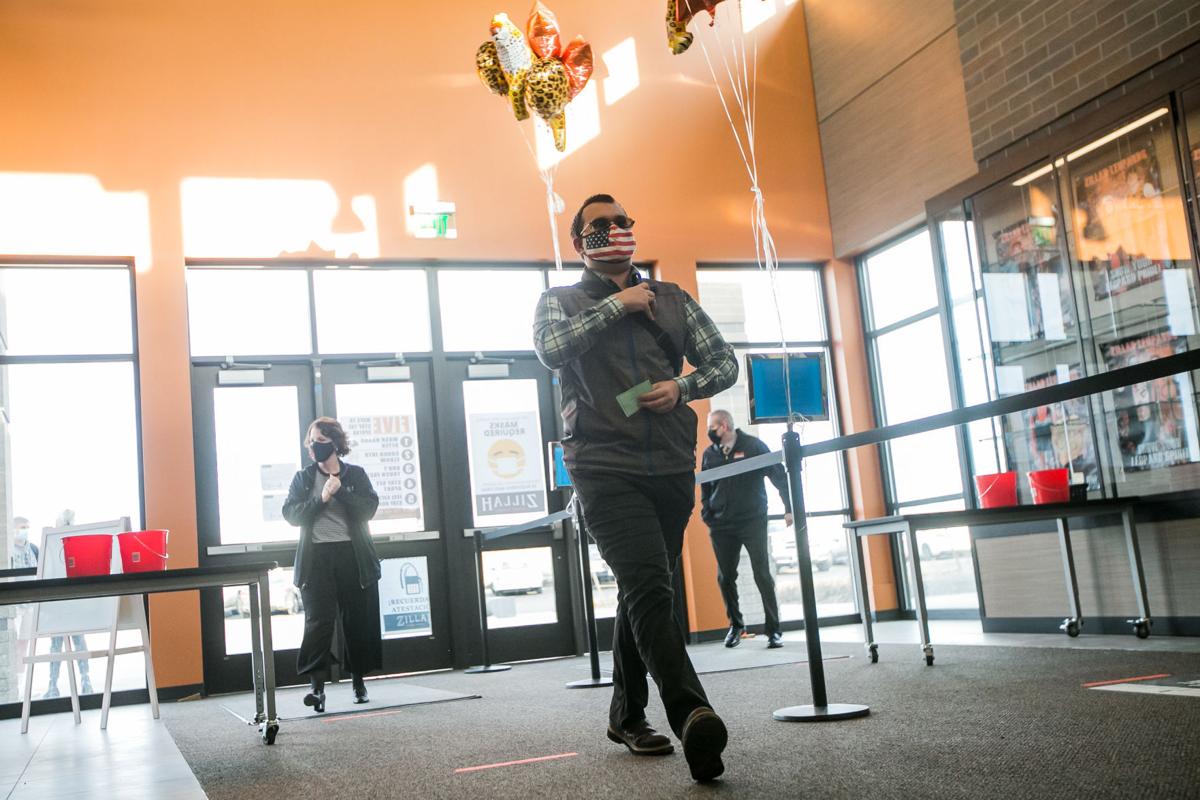 A student wears a face covering Monday, March 1, 2021, as he walks toward the health screening table at Zillah High School in Zillah, Wash. 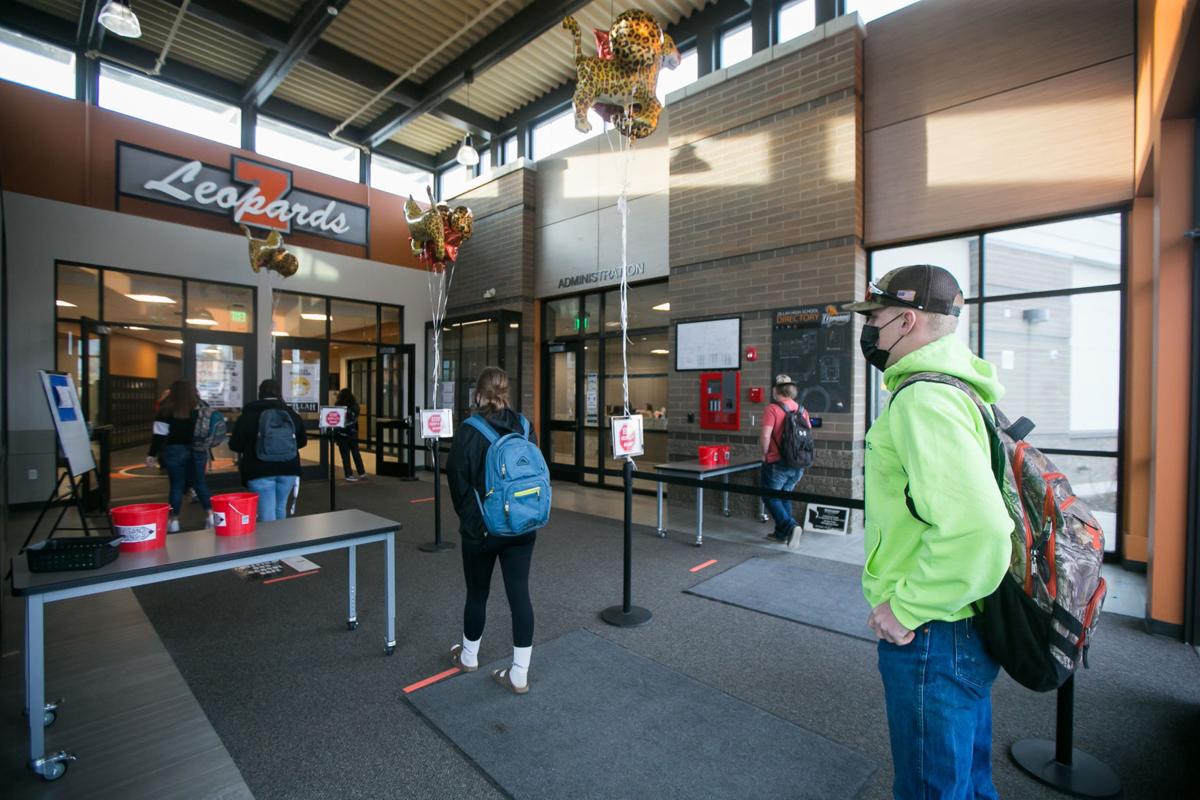 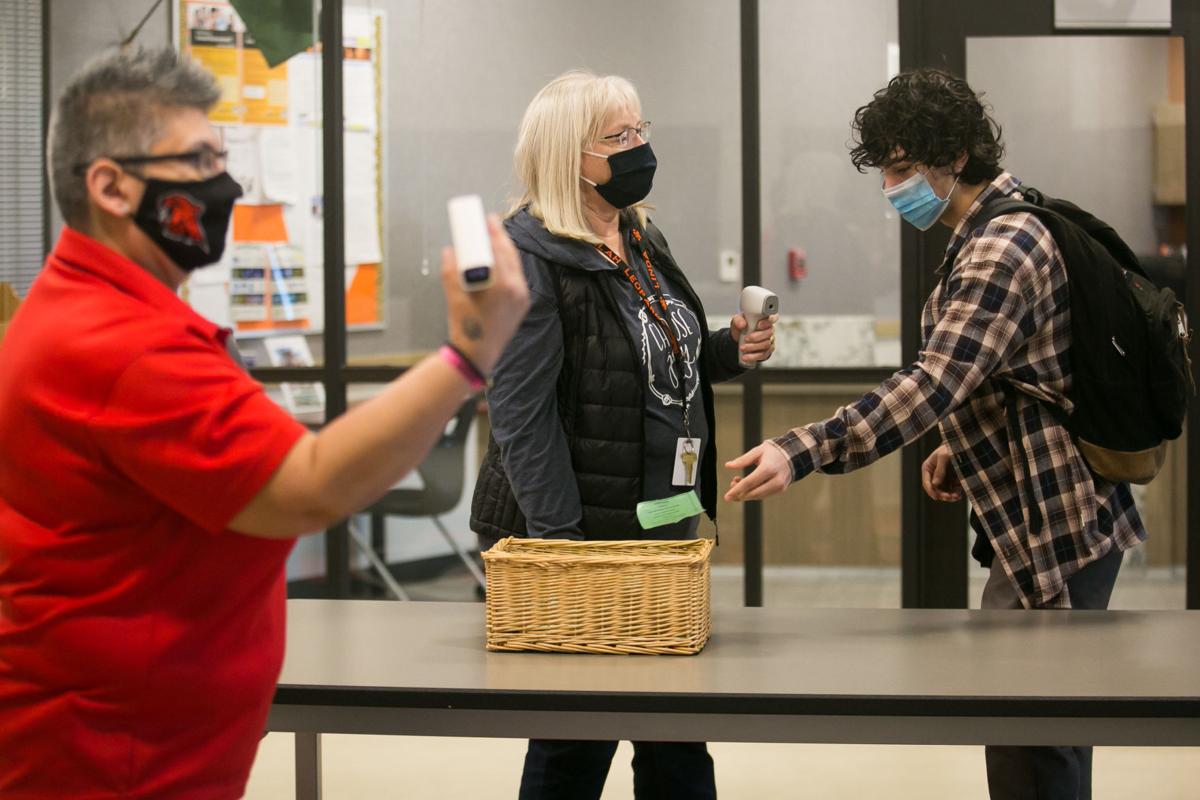 A student turns in his health screening card Monday, March 1, 2021, at the front entrance of Zillah High School in Zillah, Wash.

A student uses hand sanitizer at a health check stand before walking on school campus Monday, March 1, 2021, at the front entrance of Zillah High School in Zillah, Wash.

A student wears a face covering Monday, March 1, 2021, as he walks toward the health screening table at Zillah High School in Zillah, Wash.

A student turns in his health screening card Monday, March 1, 2021, at the front entrance of Zillah High School in Zillah, Wash.

As Zillah High School students entered the front campus doors to have their temperatures checked before heading to class Monday morning, school staff greeted them by name and offered encouragement to students who had recently improved their grades.

After just nine days of returning to campus for part-time in-person learning, failing grades among students had dropped by 14%, according to data from the high school.

Both students and teachers also reported that the content of instruction had improved. Students said they felt more on-task and that they were taking more away from their work, rather than checking off tasks. Teachers said they were better able to track how students were doing in coursework and support them, and also that lessons had become more detailed and better focused.

Part of the reason is that school periods are over an hour, rather than the 30-minute video conference sessions offered during remote learning, which often meant candid conversations and discussions about assignments were cut short.

Seventeen-year-old senior Kaia Lindstrand said she had a hard time keeping up with her calculus class during remote learning. Explanations of new content would often take up the majority of class video calls, leaving minimal time to work through problems and ask questions as she ran into difficulties. Now that she’s back in the school building, she said she feels more confident in her mastery of the material.

In some cases, curriculum just didn’t translate online. In a digital design class, for example, students in remote learning used a variety of software like Microsoft’s PowerPoint and Publisher programs to learn design. In person, on the other hand, they were able to learn the ropes of Photoshop, as intended for the class. It’s a software that is crucial to design fields. But the licenses for the software were too expensive to offer on students’ take-home devices, so the teacher had to change the coursework.

Students also said they felt their mental health and social skills rebounding, after almost an entire year of being away from campus and peers in light of the COVID-19 pandemic. Returning to campus was a welcome change, they said.

“I’m just really thankful that we got back,” Lindstrand said.

It’s something other students throughout Yakima County are experiencing.

After the Yakima Health District gave the OK for high schools to begin returning students to part-time (or hybrid) in-person learning in early February, the dominoes began to fall. By mid- to late-February, East Valley, Granger, Highland, Naches Valley, Selah, Wapato, West Valley and Zillah school districts had introduced some or all high school students to on-campus learning. With the arrival of March, Grandview, Sunnyside, Toppenish, White Swan and Yakima high school students have also returned or will soon follow.

While full grades of high school students are just returning to campus-based instruction, younger students in many local districts have been learning in person for months. As of Tuesday, there have been 358 cases of COVID-19 identified in school staff and students on campuses — both public and private — since the start of school in August, the Yakima Health District reported. Of those, 12 are considered to have been contracted on campus. In the remaining cases, they are believed to be from broader community transmission.

In allowing high schools to reopen, the health district pointed to low transmission numbers in person and a dedicated outbreak response team in the county. The health district also noted the mental and physical needs of students as reasons to return in person.

To return to the classroom, schools are required to follow strict safety guidelines, from masking and social distancing to temperature checks.

At Zillah High School, the roughly 360 students doing in-person learning are broken into two cohorts: one in the morning, and one in the afternoon. They attend campus with their cohort for a few hours each day and continue online learning at home. Teachers and students have their temperatures checked upon arriving on campus and report any potential symptoms or exposure to COVID-19. They then are directed to use hand sanitizer and head directly to their respective classes.

So far, students only have one class rotation a day. Soon, that will increase to two. The students sanitize their desks before heading to their next classroom, and teachers also do a wipe-down of the classroom. Between the two cohorts, school staff pitch in on a deep clean of campus, making sure it’s safe and ready for the next group of students, said high school Principal Mike Torres.

“This has to be done in a certain way to keep us in session,” he said.

Both students and staff said they felt confident in the safety and sanitation protocols. The state opened COVID-19 vaccination eligibility to school staff this week, which also helps, educators have said.

For those who still have concerns, there’s an online option, Torres said. About 75 high school students have remained in full-time remote learning through a learning platform called Edgenuity. Other districts throughout Yakima County also use Edgenuity or other online schooling platforms. (The Yakima Herald-Republic plans more reporting about online learning platforms.)

In Zillah’s case, he said, school staff sculpted the online curriculum to make sure it aligns with learning targets and standards at the high school. Certified teachers employed by the program offer video instruction based on this curriculum.

Meanwhile, for students on campus, Torres and teaching staff report significant development among students in terms of grades and social-emotional well-being. Like other high schools throughout the county and state, Torres said students either excelled or flailed in remote learning — there weren’t many students in the middle.

Many of those students who had been struggling are now making strides.

Math and history teacher Josh Simmons said a large part of that is simply due to being able to build better connections and relationships with students in person, as well as check in with them through more natural segues in class. But he said more needs to be done to target interventions, seeking out students who need extra help.

Some steps are already being taken in Zillah. Each high school teacher has identified five students in their courses who are struggling with grades and working with them to tailor support and help them get back on track. As one student’s grade moves into passing, the teacher identifies another student in need. Just since returning to campus, Simmons said he had seen two of the students he is working with move their grades from failing to passing through this effort.

“It’s still a constant struggle. It’s not even close to solved. We’re constantly brainstorming new ways to have kids be more engaged,” he said. “I keep reminding kids, ‘It’s going to get better. It’s going to get better.’ But, I think we have to be proactive in that. We can’t just say it’ll get better because they’re here. That can’t be the answer.”