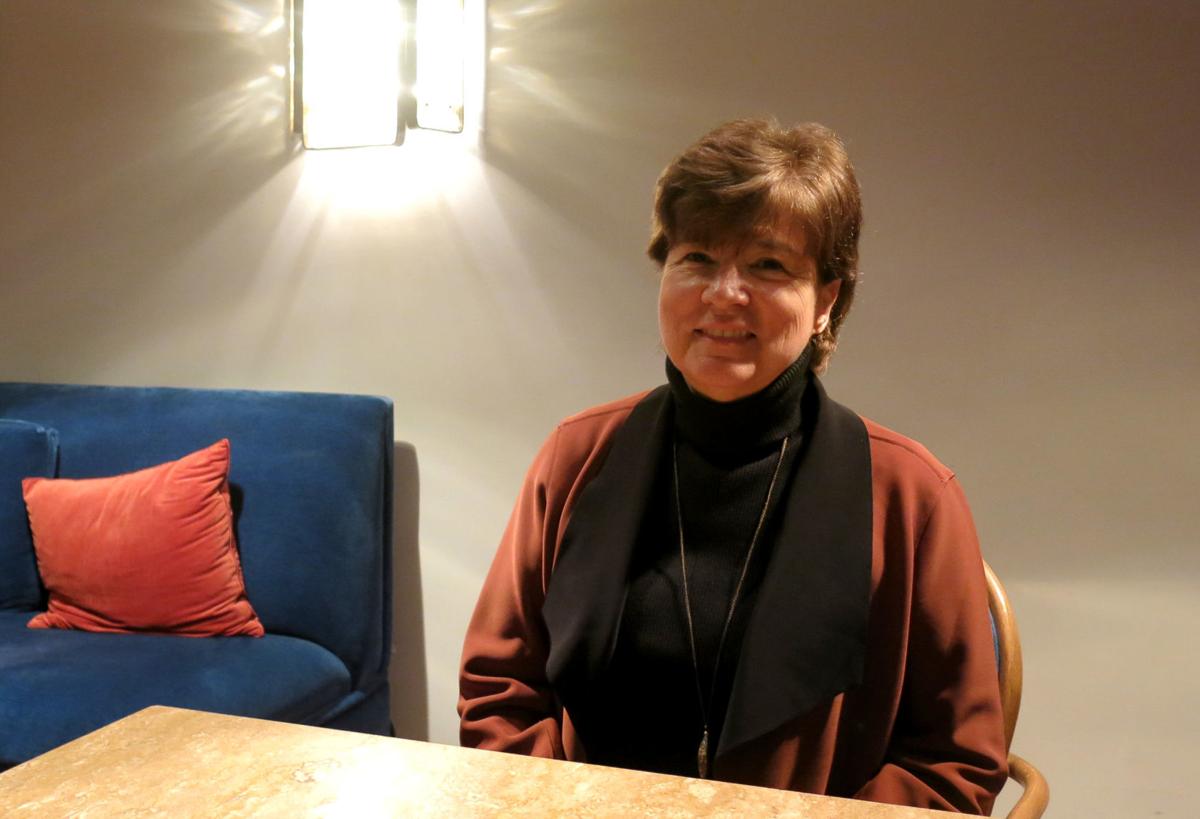 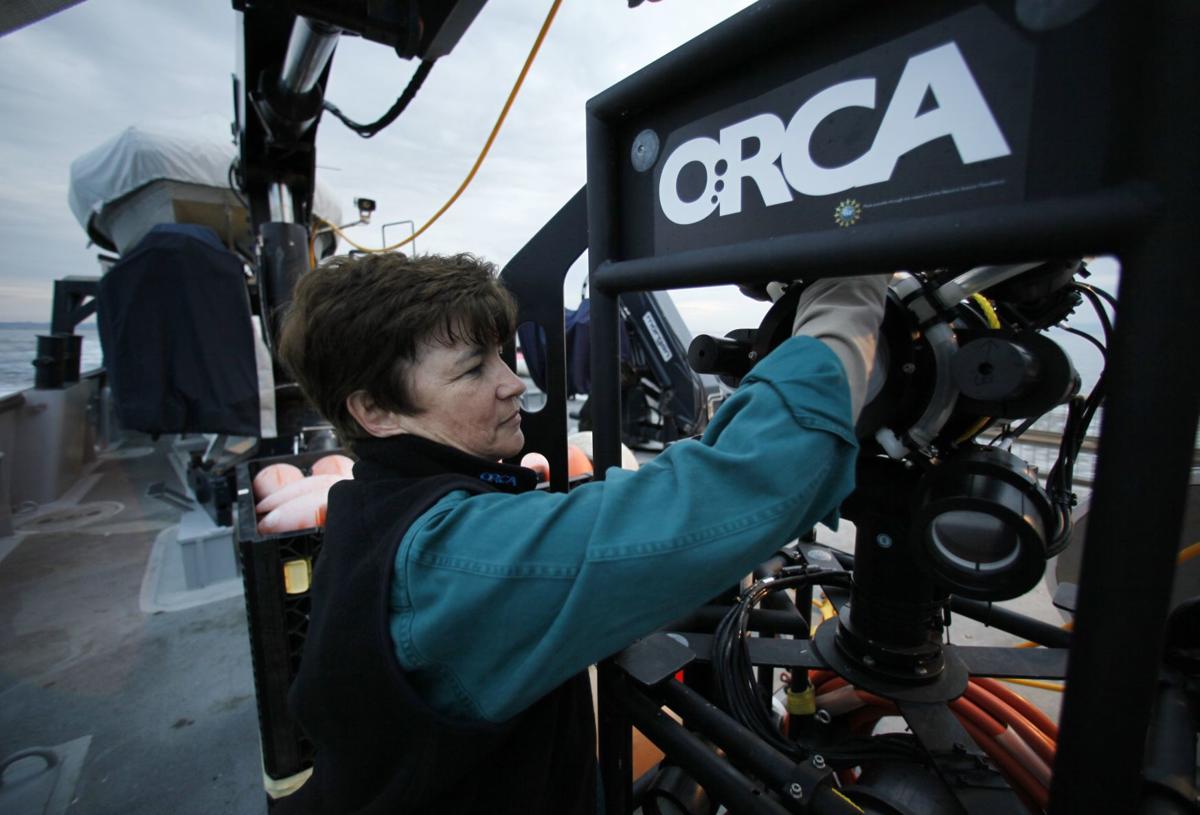 Marine scientist Edith Widder inspects a 502-pound deep sea video camera "Eye-in-the-Sea" aboard the Research Vessel Point Lobos, on Monterey Bay, Calif., Wednesday, Jan. 21, 2009. The Eye-in-the-Sea is the world's first Web camera that will offer a window into the darkness of the deep ocean.

Marine scientist Edith Widder inspects a 502-pound deep sea video camera "Eye-in-the-Sea" aboard the Research Vessel Point Lobos, on Monterey Bay, Calif., Wednesday, Jan. 21, 2009. The Eye-in-the-Sea is the world's first Web camera that will offer a window into the darkness of the deep ocean.

The lights in the auditorium dimmed and the stage went dark. Then, Widder picked up one of the bottles and shook it, making it glow until it slowly went dark again.

Small bioluminescent cells were using chemicals to create light. Each cell had the ability to light up roughly 30 times, she said. But each flash would become dimmer.

Bioluminescence is not a trait unique to the algae.

“Most of the animals in the open ocean make light,” Widder said.

Some light up to see their surroundings while others use light to signal to mates or attract prey, she said.

Widder is an award-

winning specialist in bioluminescence and founder of the Ocean Research and Conservation Association (ORCA) conservation nonprofit.

Her study of marine life started in the early 1980s after she finished a doctorate in neurobiology. She began to study what triggered the electrical activity in dinoflagellates, the type of bioluminescent algae she had on stage with her this week. Soon, she was offered the opportunity to go out to sea to conduct tests on marine life.

In 1984, Widder took her first deep sea dive in the Santa Barbara Channel off California, dropping 880 feet below the surface. Once she got down there, she turned off the light in her diving suit, or WASP.

“There was light all around me and it looked like Van Gogh’s ‘Starry Night,’” she said of the famous painting in which stars swirl between the dark blue hues of a night sky. “Diving in WASP completely changed my understanding of the nature of deep sea diving.”

From then on, Widder was determined to see and understand more of life underwater, only 5 to 20% of which has been discovered so far, she said.

Over time, she came to believe that the white light and noise of the gear being used in marine research was repelling sea life, since they were only accustomed to bioluminescence in their otherwise dark environment. She eventually developed her own sea creature prey: an electronic jellyfish that imitates bioluminescence to lure sea creatures.

The idea was this: Some sea creatures light up when they’re being attacked in an effort to attract their attacker’s predator, saving them at the last minute. The electronic jellyfish would emulate this gentle light, rather than using alarming bright lights often found in gear. A far-red light invisible to most deep-sea animals would enable researchers to catch images of ocean life without them perceiving the secondary equipment.

In 2012, her technology made history, capturing footage of the Giant Squid, which can span several meters in length, in its natural habitat for the first time in collaboration with the Discovery Channel. Numerous expeditions before had attempted to do the same, without success, she said, calling the Giant Squid the Holy Grail of sea exploration.

Earlier this year, she used the electric jellyfish for the first time since then, filming a Giant Squid in the Gulf of Mexico off New Orleans. Because there was no delay in publication of the footage, unlike before, Widder said it went viral worldwide.

“I think it’s an indication of just how much people care about this kind of exploration, and that we need to be feeding that,” she said.

Widder said climate change, deep sea drilling and pollution are damaging ocean life at unsustainable rates. With 71% of the surface area of the Earth made up of ocean, exploring and protecting sea life is paramount, she said.

“Learning about the world around us, understanding nature and sharing that information with each other has been key to our survival since the time of primitive man on this planet, and it’s still key to our survival,” she said. “We need explorers now more than any time in human history. We live on an ocean planet, we cannot lose sight of that, and we cannot allow it to be destroyed without even beginning to explore it.”

As part of Widder’s Yakima visit, the Yakima Schools Foundation sponsored a visit between her and students at Franklin Middle School on Tuesday, where she said students were absorbed in the workings of marine life. The foundation and the Southwest Rotary of Yakima also funded bioluminescent lab kits for each sixth grade class districtwide, which will allow 1,200 students to study the dinoflagellates Widder presented to the Yakima Town Hall crowd through lab instructions she created.

An NBA Hall-of-Famer, an influential food critic, a well-regarded legal analyst and an adventurer who severed his arm to save his life compris…

Chuck Underwood admits he’s a workaholic. Like others of his baby-boomer generation, he is devoted to his work and it defines his life, for th…