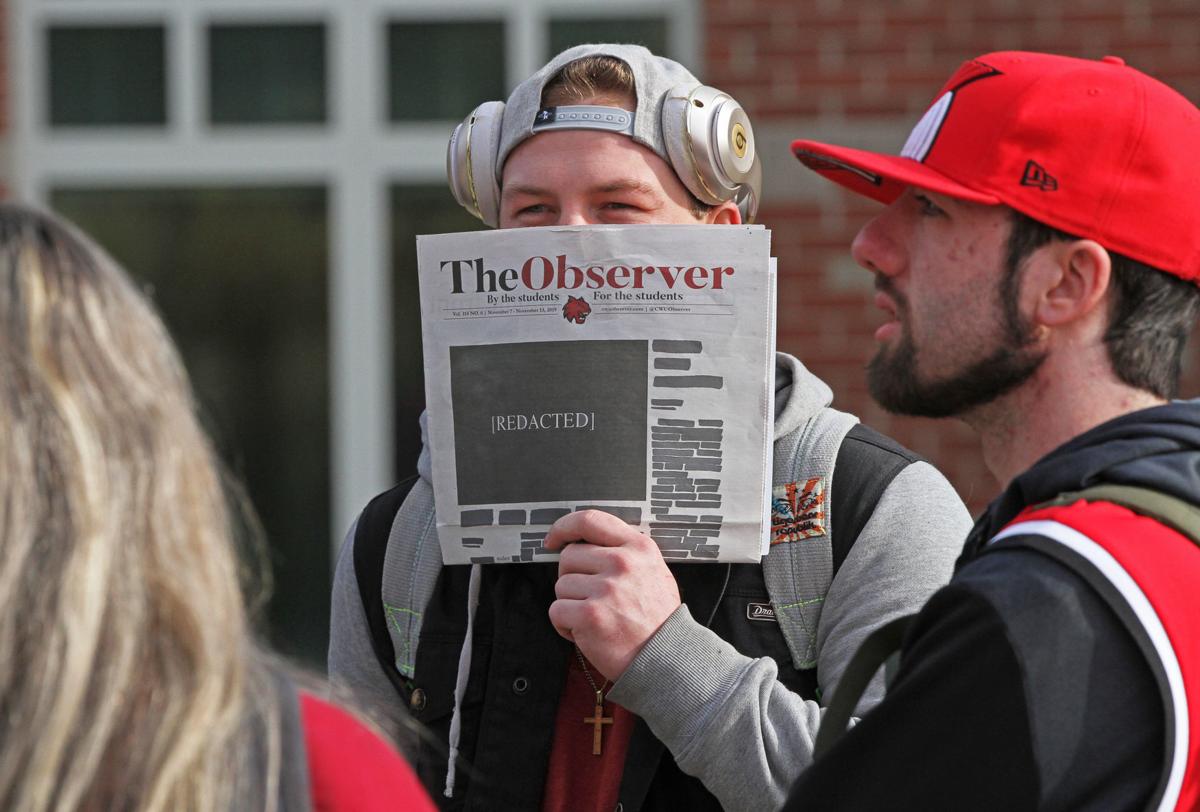 Central Washington University senior Kyle Stahl holds a copy of The Observer in front of his mouth during a protest on content regulation by CWU administration Thursday morning outside Discovery Hall. 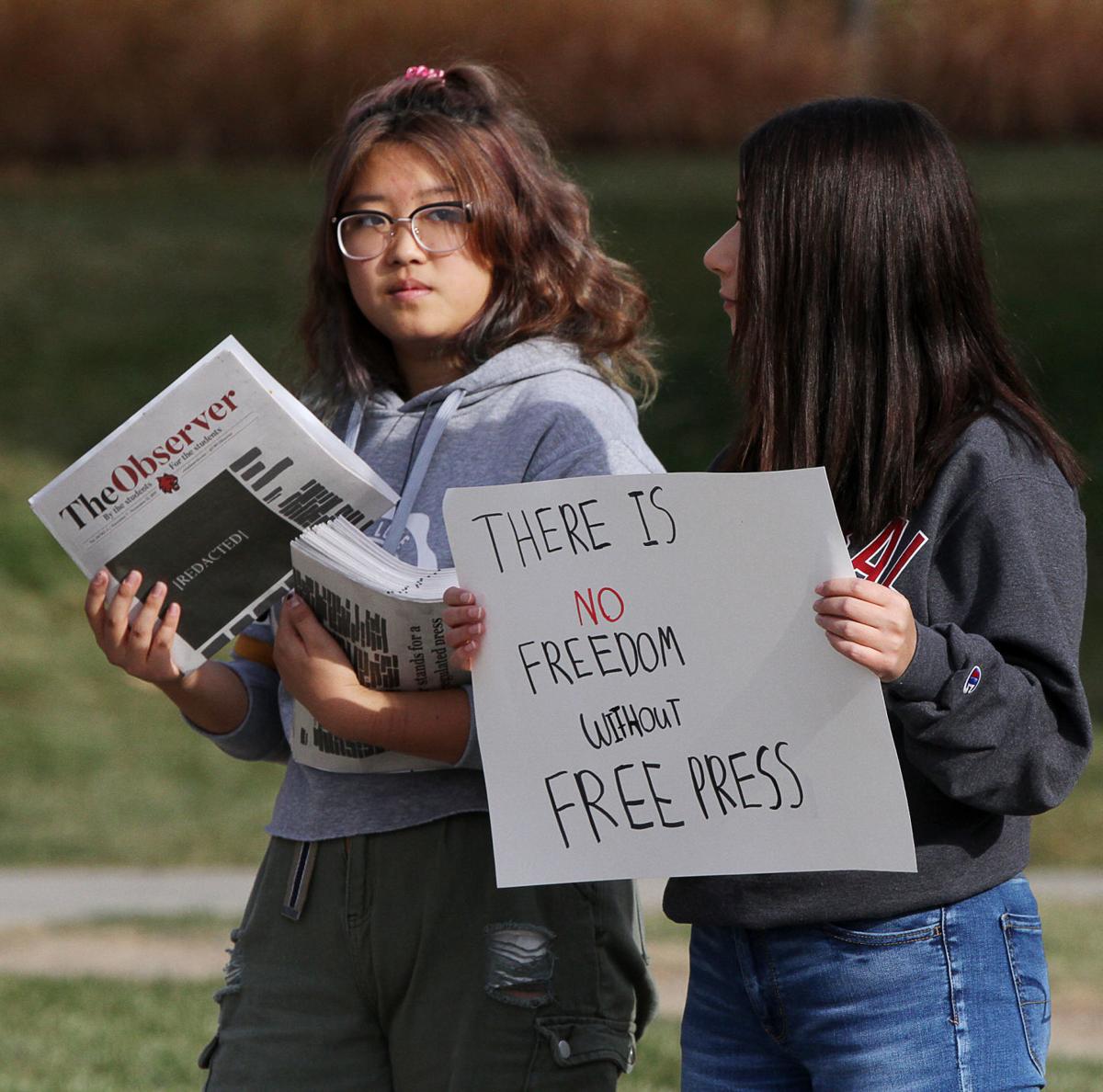 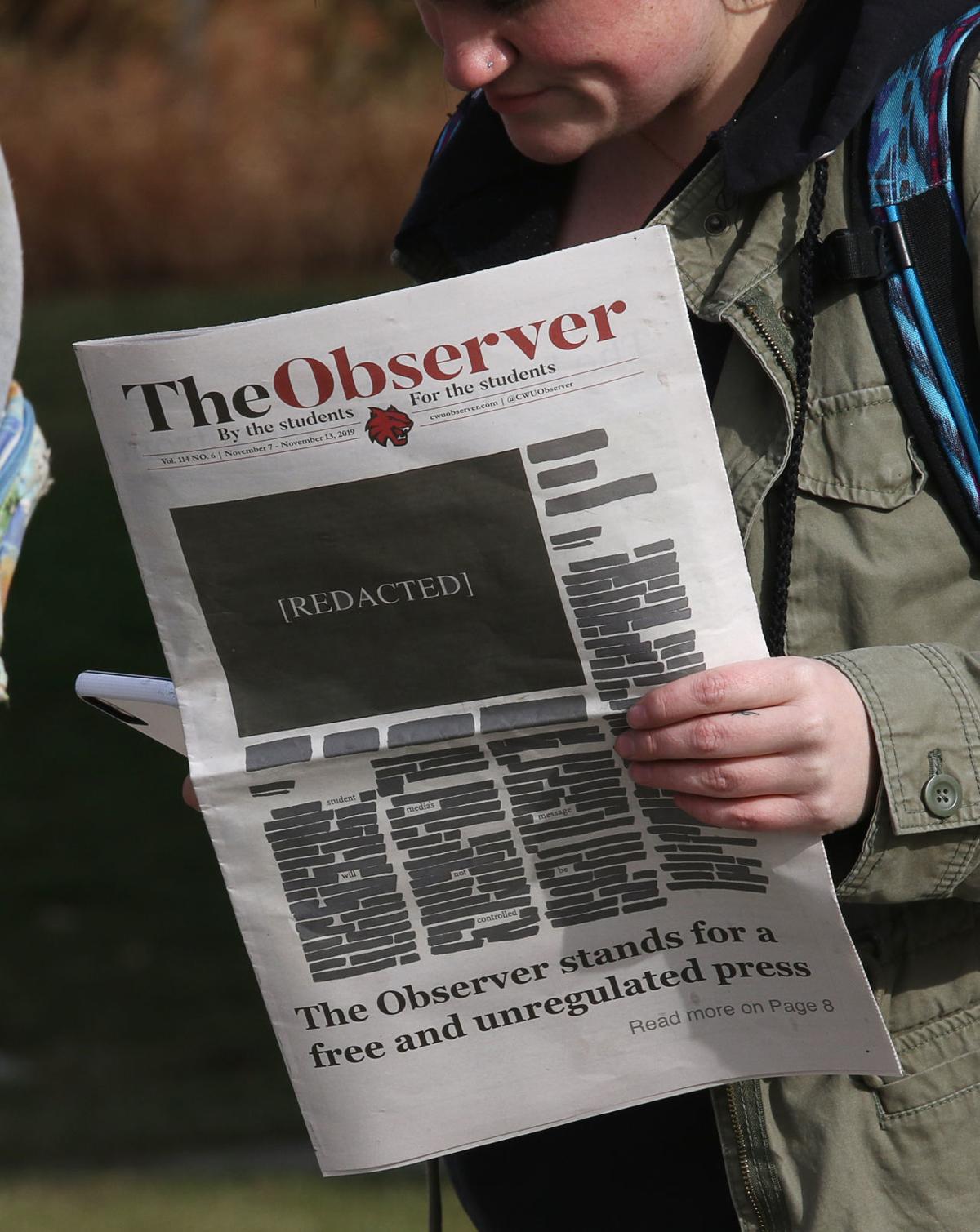 Central Washington University student Casey Clausi holds a copy of The Observer during a protest on content regulation by CWU administration Thursday morning outside Discovery Hall.

Central Washington University senior Kyle Stahl holds a copy of The Observer in front of his mouth during a protest on content regulation by CWU administration Thursday morning outside Discovery Hall.

Central Washington University student Casey Clausi holds a copy of The Observer during a protest on content regulation by CWU administration Thursday morning outside Discovery Hall.

More than 100 Central Washington University students protested what they say is media censorship on campus Thursday.

Representatives of The Observer, CWU’s student newspaper, and Central News Watch, a student-operated broadcast, say they have been required to submit questions to departments to be approved by administrators before interviews will be coordinated.

School officials say the request for questions is not intended to limit the scope of interview questions, but to guide staff to the best sources for the article and help sources prepare for interviews. They also say each department has its own media policy.

Student media representatives say this is a breach of an agreement between student media and administrators made in April to provide context, but not questions, ahead of interviews. They equate the request to censorship.

Students gathered at the center of campus from roughly 11 a.m. to 1 p.m. to demand free press and transparency from administrators.

“We are just trying to get out there to say, whether or not we’re student journalists, we are still journalists,” said Observer Online Editor Mariah Valles. “We don’t need to send in interview questions before an interview, no matter what the reason.”

Valles said there were as many as 40 students gathered at one time during the protest, with at least 100 attendees over its duration.

In response, CWU student government President Jasmin Washington said she was planning a meeting between student media and administrators to find a resolution. She said she expected it to take place next week and it would likely be a public forum that would be recorded on video to ensure an agreed resolution.

Where the issue began

The issue arose in April, when an Observer reporter requested an interview with an official from the university’s Wellness Center and was told to submit questions before the interview would be confirmed.

Kremiere Jackson, CWU vice president of public affairs, said around that time the Student Success Department, which encompasses the Wellness Center, was getting several calls from reporters toward the end of the work day, stating they were on deadline. She said this gave staff little time to coordinate an interview. In some cases, reporters were not able to communicate what kind of source they were looking for, she said. At times, they were unprepared for the interviews, she said.

Valles of The Observer said Thursday that in the meeting, both parties agreed that questions would not be required to be submitted ahead of interviews, but context for interviews would be provided.

Jackson said more context on what their stories were about and “maybe some of the questions” had been agreed upon to help the Student Success Department better identify the appropriate source and ensure sources were prepared for the interview. She said she believed they had come to an agreement, and had not heard any complaints from the student media until the demonstrations Thursday.

In the Wednesday opinion piece, The Observer staff outlined two instances since the April meeting in which Wellness Center staff requested questions ahead of interviews. In one case, further context was provided and the interview was conducted. In another, The Observer wrote the article without the interview, rather than submit questions, it said.

In a separate instance, The Observer said it was denied interviews with current and former athletes by the Athletic Communications department because a reporter declined to submit questions ahead of interviews.

In an official statement Thursday, the university said it was not censoring students.

The Observer responded by publishing screenshots of emails from the Wellness Center requiring questions be “approved” before an interview was scheduled.

Jackson said Thursday the intent was “not to tell a reporter what they can or cannot ask.”

“To be honest, every interview that they have asked for, they have been granted access to every single employee,” Jackson said of the student success department. “I would venture to say there were no questions that were not answered, ever. But I will say that the goal is always to make sure that whoever is talking to a reporter, they are getting the right person ... in front of them so they can have the right information.”

In regard to the interviews with athletes that were allegedly canceled, Jackson said that each department at the university has its own media protocol.

Asked if the various departments’ media approaches fulfilled the university’s obligation of transparency as a public institution, Jackson said: “Do I think that there’s censorship taking place on this campus? No, I do not, if that’s your question.”

Director of Athletic Communications Will McLaughlin declined to comment.

Student media policies that limit access to experts is an issue seen on campuses nationwide, said Lindsie Rank, program officer for the Foundation for Individual Rights in Education, a national civil liberties organization.

“Just these last two weeks, I’ve gotten at least three other instances where we’re seeing similar policies that we’re keeping an eye on,” she said.

Rank said she had seen more instances in recent months, which could be because of increasing instances or more awareness of media suppression.

“Student reporters have the First Amendment right to ask tough questions and conduct really quality journalism, and … shouldn’t have to face large obstructions along the way,” she said. “We really commend the students in this situation for standing up for their rights and for engaging with the campus community to solve this problem.”