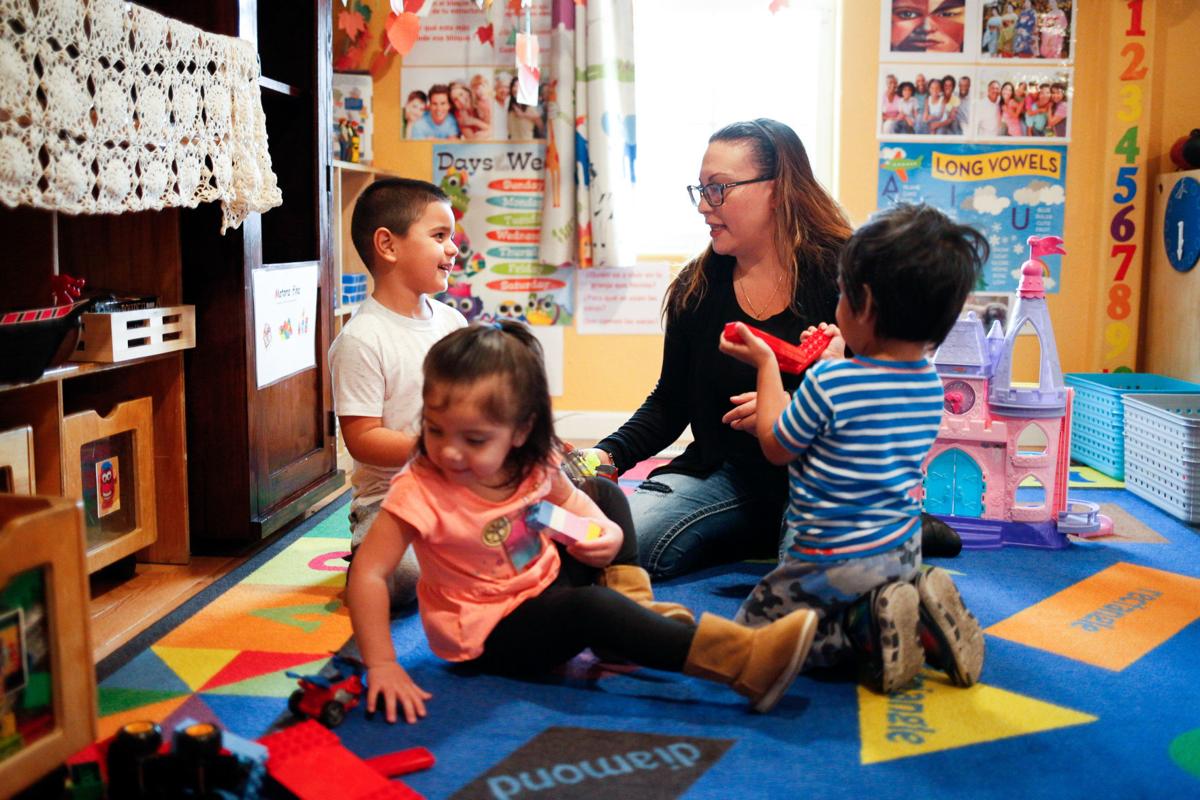 A daycare provider plays with children at a Yakima child care center in January. 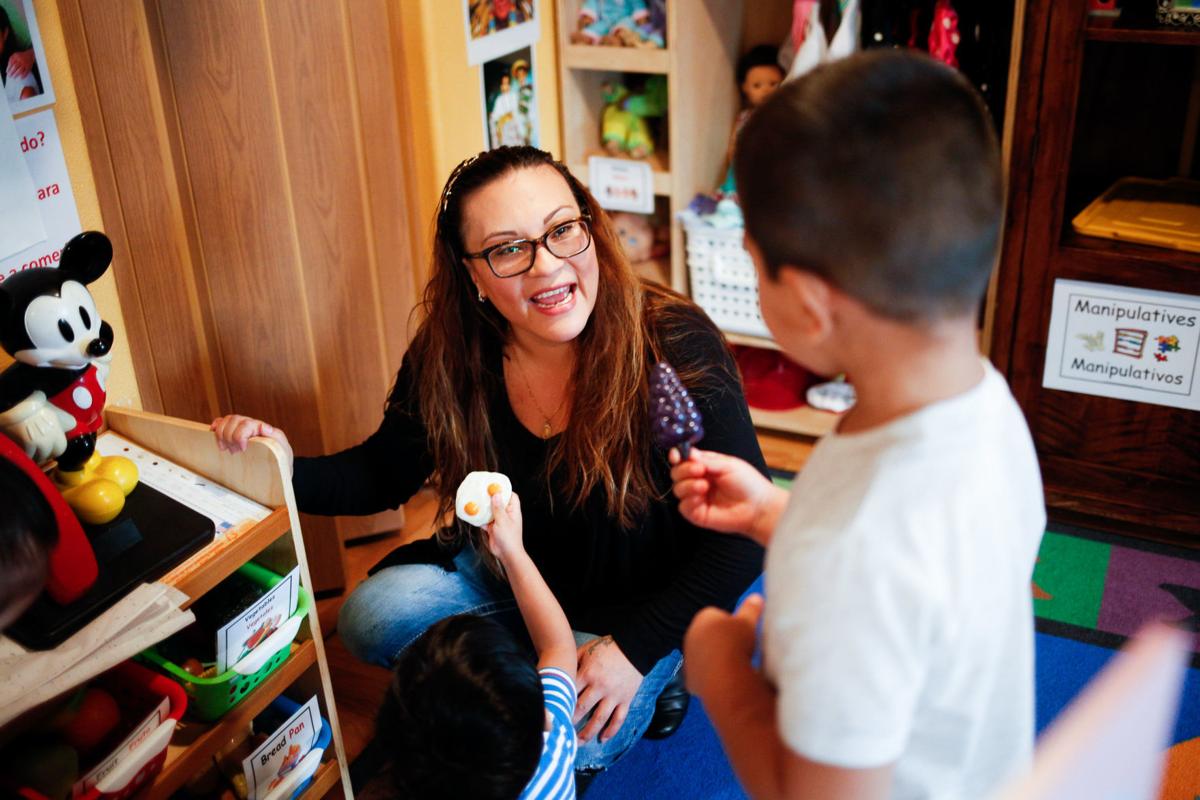 In this photo taken on Tuesday, Jan. 14, 2020, Raquel Cortez, owner of Bright Beginnings Daycare, plays with children at her daycare in Yakima, Wash.

A daycare provider plays with children at a Yakima child care center in January.

In this photo taken on Tuesday, Jan. 14, 2020, Raquel Cortez, owner of Bright Beginnings Daycare, plays with children at her daycare in Yakima, Wash.

A slew of bills intended to reshape child care in the state have been proposed in Olympia this legislative session to help the struggling sector.

At least seven proposals aimed at improving access, affordability and employment sustainability have made it past their respective house of origin, allowing them to continue toward potential approval.

Among them is a bill introduced by Rep. Tom Dent, R-Moses Lake, which would create alternate, community-based pathways for providers to meet increasing professional education requirements.

Two of the most ambitious bills that attempted to create a more sustainable framework for the industry did not meet session cutoffs. But one could be considered necessary to the budget — allowing it still to be signed into law — while the other is expected to be reproposed in coming years until the broader vision is fulfilled, according to the lawmakers who proposed them. (See related story).

The ambitious scope of the various bills proposed this year shows a new determination among lawmakers to fix the problems, said Maki Park, head of early learning in Washington state for national grassroots organization MomsRising.

“The very fact that these bills are on the table shows that the state is ready for this conversation and is really raising the level of discussion around child care in recognition of the fact that we’re facing a crisis,” Park said. “The outpouring of support that we’ve seen also shows how necessary it is to take legislative action to expand child care.”

Yakima County has a dearth of child care offerings. About one-third of the 12,400 local children under the age of 5 were potentially unaccounted for by the child care industry in 2018, estimates from Child Care Aware and U.S. Census Bureau data show.

Much of the county is considered a child care desert, according to the Center for American Progress. Deserts are defined as “any census tract with more than 50 children under age 5 that contains either no child care providers or so few options that there are more than three times as many children as licensed child care slots.”

But the issue is something that stretches statewide. Washington has the sixth highest share of people living in child care deserts of all states, the organization found.

Child care providers across the state have the capacity to serve just 17% of children under the age of 13, research by a state-

The impact is felt across the board. Research shows that unstable child care services cost the economy greatly. In 2017, child care issues cost employers statewide $2 billion from employee turnover, a report by the state panel found. Another $3.7 billion was lost to the state economy due to missed opportunities like production cuts caused by child care disruptions that same year.

High quality child care is also seen as a key component to ensuring students are prepared to enter the K-12 system, leading to recent efforts by the state to ramp up learning expectations in these settings. This has led to pushback among providers in the low-paying industry.

In November, the task force provided an extensive list of recommendations on how lawmakers could fix the convoluted child care system.

Some of the key recommendations included providing professional development in accessible formats and a variety of languages for providers; providing grants and loans to start new centers or for existing providers to handle unanticipated costs; and adjusting subsidies to meet the needs of more families and fully cover the cost of child care.

Several of the recommendations were addressed in proposals this year. But not all of them are making their way through Olympia this session. The bills still on the table now must be approved by the second chamber to be signed into law by the governor.

The short legislative session is expected to conclude March 12. Here are child care bills that have met legislative cutoffs:

It would require the Department of Children, Youth and Families and the State Board of Community and Technical Colleges to collaborate to provide college credit for the community training.

Dent could not be reached for comment. But in a news release, he said his proposal was in response to fears of continued child care closures.

“I have had many conversations with providers over the last year. Many were concerned they would have to shut their doors because of the new rules and regulations. They are losing good staff and running a child care business has become very costly,” he said. “It isn’t just the providers. I have heard from a lot of parents who are struggling to find affordable child care options.”

The bill was unanimously approved by the House and sent to the Senate. It is expected to be discussed by the Senate’s early learning and K-12 committee on Monday.

A second bill would allow providers to continue receiving subsidies as they complete required improvements in their facility.

Another bill includes framework for a grant program that would support dual-language child care programs to support English language learners. The program would target students who speak a language other than English at home, and at least 50% of the content would be taught in that language. Suggested languages included Spanish, Somali and Vietnamese. A position would be created to oversee the grant process.

A handful of bills propose changes to child care access.

One bill would require DCYF to develop a plan to make licensing of a child care more accessible to rural areas. It would allow child care licenses to be transferred if an operation is sold, and would allow a child declared eligible for the state early childhood education and assistance program to maintain that status until starting kindergarten.

A separate bill would standardize definitions around homelessness to improve access to child care services.

Separately, the Working Connections subsidy could be adjusted to begin when a child starts child care, rather than when the family is approved for the subsidy, if another bill is passed. This would address situations in which parents had not found a child care spot for their child by the time the subsidy went into effect, potentially reducing the amount of time the child received services.

A vision of what the child care system in Washington state would look like if it was adequately funded and provided affordable and accessible high quality child care is outlined in Sen. Claire Wilson’s Early Care and Education Act.

The 33-page bill covers the gamut. It would offer more comprehensive subsidies, support hubs for services, increased home visits for expecting moms, and more inclusive and culturally responsible child care, among other things.

Wilson, D-Auburn, said it would cost more than $12 billion to fully realize the plan.

"The fiscal note is beyond what you could even imagine," she said. "I knew there was no way I could get anyone to say, 'We're going to take all that money and invest in all of that.' But what I wasn't willing to do was to break a bill up and have our Legislature only fund a piece and a piece and a piece, which is historically what they've done. It's never been a system."

The return on the investment would be seven-fold, she said, eliminating remedial efforts later in the K-12 system and costs to the state economy. Each year, she plans to revive the bill, so the vision doesn’t disappear, she said.

The bill didn't make it through the Senate. While Wilson didn’t expect her bill to move forward, another bill in the House, introduced by Rep. Tana Senn, D-Mercer Island, could make significant progress toward the goal if approved, she said.

The bill did not pass the House, but Senn said it could be considered necessary to the budget, making it possible to be signed into law regardless. She said the bill had support from both sides of the aisle as well as backing from the business sector.

“I would say by 2028, we should have accessible and affordable child care across the state if we do this now — if we fully do this now,” said Senn.

Both Senn and Wilson said in the meantime, the smaller bills on child care making their way through the chambers, would help.

Child care desert: An area with either no child care providers or such sparse offerings that the population of children significantly outweighs the number of child care slots.

Working Connections: A state-funded child care subsidy that helps families with low incomes pay for child care. Parents often pay a copayment to the provider for the care.

Statewide, licensed child care centers have the capacity to serve only 17% of children under the age of 13, according to research from a task …