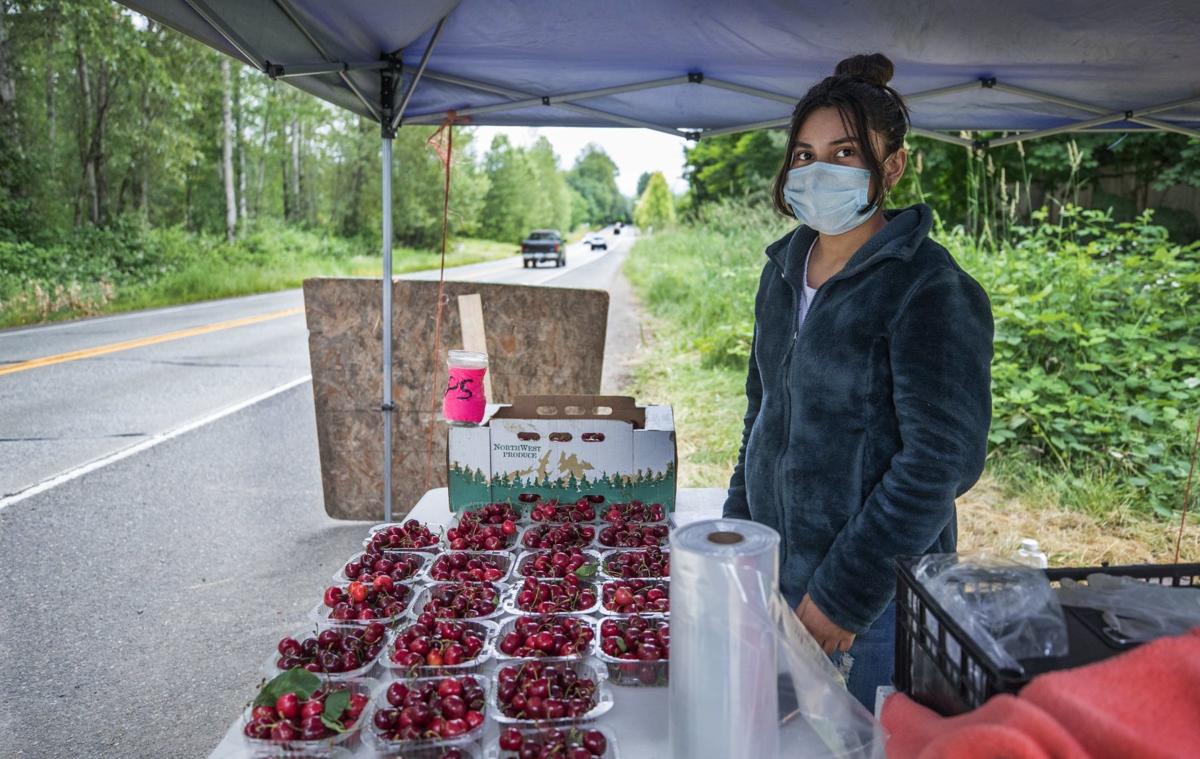 Estefania Romero Vicencio, 14, poses for a portrait on Wednesday, June 24, 2020, in Redmond, Wash. Romero Vicencio is an English language student at Davis High School and is now learning with difficulty online. She’s now selling cherries at a stand in Redmond. 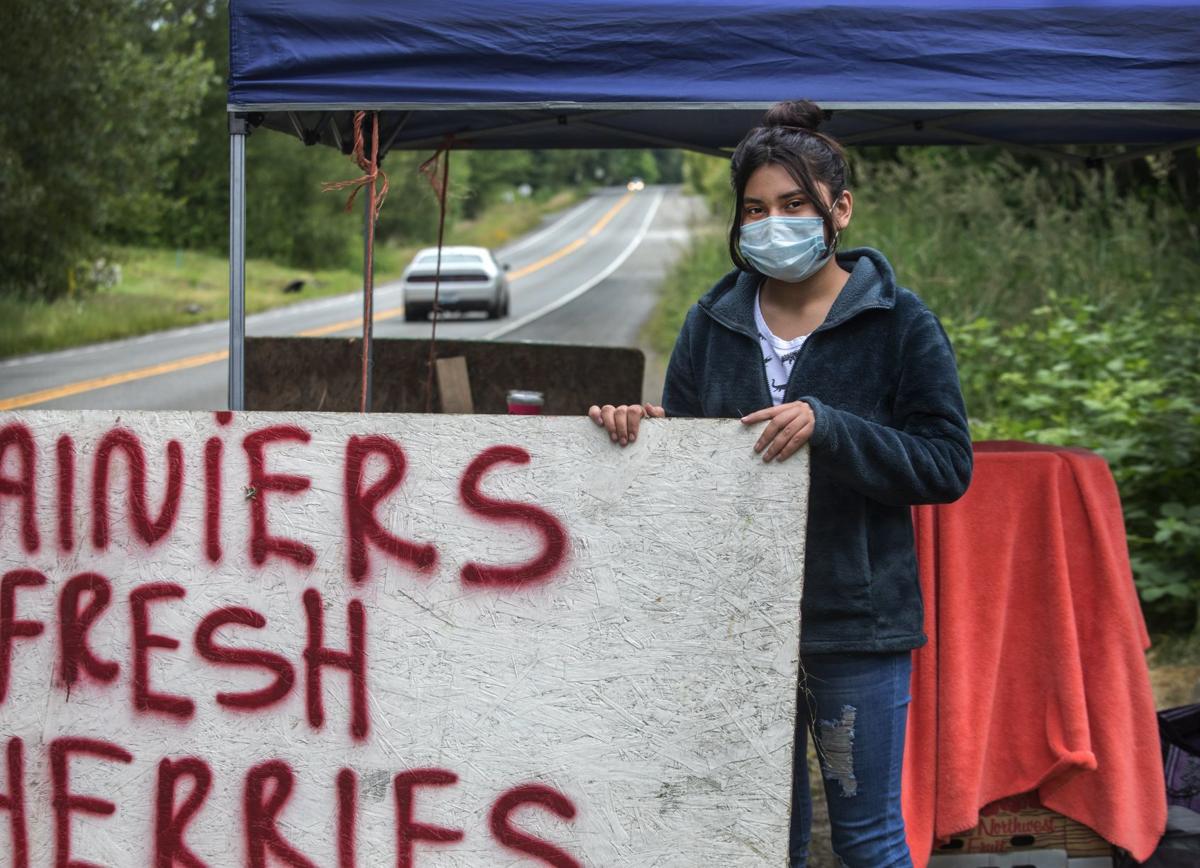 Estefania Romero Vicencio, 14, is an English language student at Davis High School in Yakima and is now learning with difficulty to study online. Today she’s working at a cherry stand in Redmond. 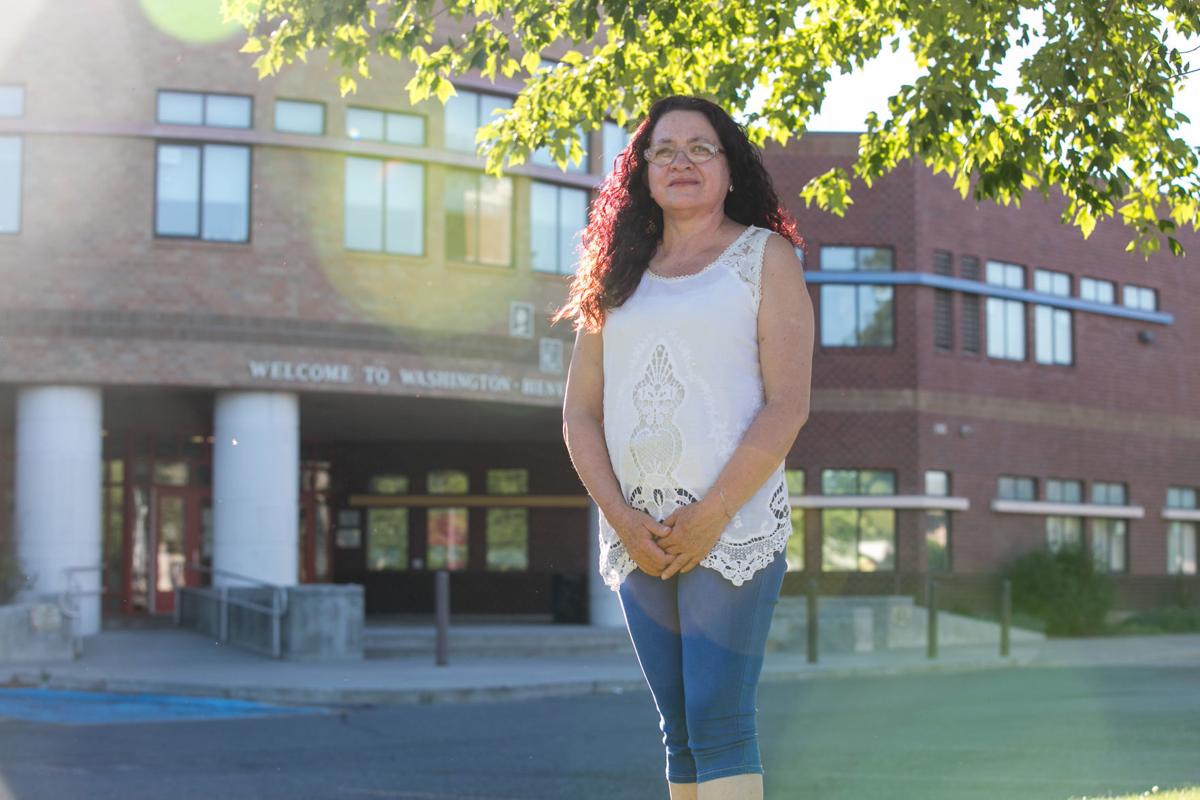 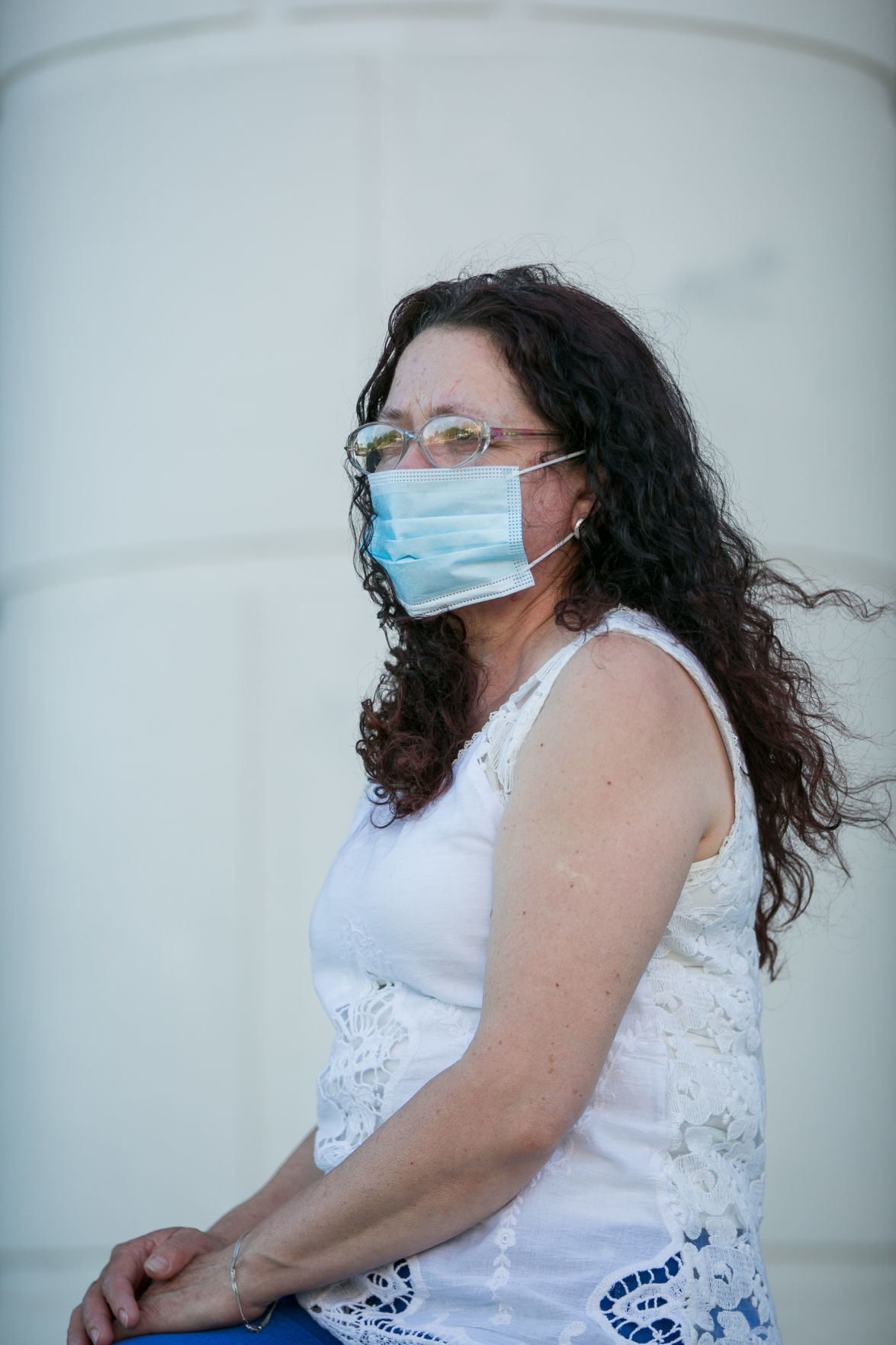 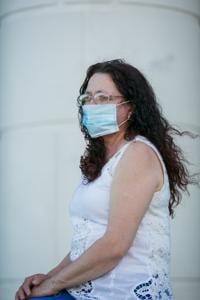 Estefania Romero Vicencio, 14, poses for a portrait on Wednesday, June 24, 2020, in Redmond, Wash. Romero Vicencio is an English language student at Davis High School and is now learning with difficulty online. She’s now selling cherries at a stand in Redmond.

Estefania Romero Vicencio, 14, is an English language student at Davis High School in Yakima and is now learning with difficulty to study online. Today she’s working at a cherry stand in Redmond.

The 14-year-old freshman from Yakima was working her way through challenging courses such as algebra. She’s also learning English as a second language. At home, her family speaks Spanish.

But she felt her progress was upended in mid-March, when the Davis High School campus in Yakima closed to slow the spread of the novel coronavirus.

“I didn’t have the connection to talk (with my teachers),” she said in Spanish.

Algebra, which she studies in English, became especially hard.

“I didn’t understand the words when they were translated,” she said.

Romero Vicencio is among 134,000 English learners in Washington’s public K-12 schools, according to state data. In some Central Washington school districts, such as Wapato, Mt. Adams and Wahluke, these students represent half the student body.

For the past few months, their barriers to accessing at-home schooling ran deep: Less hands-on help from teachers; issues understanding school websites or learning platforms; and, in many cases, since many of their parents are essential workers, the need to watch their siblings during the day.

As teachers and language specialists plan for the school year ahead, they’re plotting how to better support these students, on campus or remotely.

English learners face an extra set of demands in the classroom. They have to make sure they understand the assignment before starting the lesson.

On campus, bilingual staff help them navigate homework and the school system itself. But when learning moved outside the classroom, many of these support systems didn’t translate.

In one local family’s case, school became a low priority as the students cared for parents who had caught COVID-19 working in agriculture.

“A lot of these kids will be falling behind,” said Gabriel Munoz, the Eastern Washington vice chair for statewide advocacy group Latino Civic Alliance. “One of the things that should really worry people is that this might continue into next fall.”

When school is held in person, English language teachers, paraprofessionals and advisers help students through core classes and English language development. They break down learning into small pieces and offer help along the way.

One English language teacher in Grant County said she gives her high school students diagrams breaking down concepts, such as compare and contrast.

This practice is called scaffolding — providing supports that can slowly be removed as students grow.

At the elementary level, language interventionist Doris Matson said scaffolding could be as simple as a teacher explaining an idiom in assignment instructions. On campus at Chief Kamiakin Elementary School in Sunnyside, she observes students and brings these struggles to teachers’ attention. Once teachers know how to help, students can focus on learning.

“We’re able to do that when we’re in the building. But when we’re virtual, that falls apart,” said Matson. Language specialists can’t sit in on every virtual class.

In other words, what works in person doesn’t always work remotely.

“It’s overwhelming … even if they do have a teacher that’s trying to support (them),” said Chelsea Brannock, English Language Learner department head at Wahluke High School in Grant County. “They’re totally lost.”

In her district, English learners account for 52% of students. Usually, those students can find a bilingual staff on campus to help clarify an assignment or translate a conversation with a teacher. While bilingual staff are available to help remotely, it doesn’t always feel that way to her students, she said.

Thirty-nine percent of parents of non-Native English speakers said their child’s school had not provided information in other languages, according to the results of a poll of Washington parents the national equity nonprofit Education Trust released in late April.

Teachers in Central Washington said without a teacher on hand, some students spent hours on assignments they didn’t fully understand. They would often submit partially completed work as a result and get poor grades despite the effort, said María Chávez Ceja, a multilingual instructional specialist in Yakima School District, which has nearly 5,000 English learners. A “do no harm” grading policy this year eliminated pass/fail grading but left decisions on letter grading up to districts.

Students and parents also reported struggling with technology. In the Education Trust poll, 22% of non-English speaking parents said they didn’t know how to use their schools’ learning platforms.

One Yakima parent said she struggled to check her daughter’s grades online and said the language support they had on campus seemed out of reach.

Other students didn’t have internet connections. A handful of high school students in Wahluke School District took state biliteracy exams from the school parking lot this spring to connect to the internet.

Many English learners also lacked oversight because their parents are essential workers in front-line jobs like agriculture, said Munoz, with the Latino Civic Alliance.

In Yakima County, agriculture makes up 27% of jobs, according to the state Employment Security Department. The local farm sector is made up of workers originally from Mexico and other Latin American countries, including monolingual Spanish speakers.

With parents at work, teachers and advocates said many English learners were busy during school hours taking care of younger siblings and helping with their homework, or working in agriculture themselves once campuses closed.

Teachers reported working long hours to support these students and parents during remote learning. Some said participation dropped. Without schools tracking attendance, it was unclear whether they were not engaged or had dropped out entirely.

Enrique Rafael, an 18-year-old student from Guatemala studying in Grant County for the past year, is on the brink. He said he wasn’t sure if he would return to school in the fall after having taken work in the fields during campus closures.

For Romero Vicencio, whose father works in local agriculture and mother lives in Mexico, household obligations pushed her studies late into the evening, when she felt unable to reach out to teachers.

Schools statewide are expected to resume in-person instruction in the fall.

State officials have said English learners are among those who should be prioritized in ramping up teaching. This might mean they are the first back in the building when school starts.

But schools in counties that have not progressed to Phase 2 of the state’s four-part reopening plan will need approval from their local health district to reopen campuses. Local health conditions could mean health officials or the governor decide against it.

Yakima Health District officials say it’s too early to tell if local schools will be ready to reopen fully. The county is considered a hot spot for COVID-19. Hospitalizations and new daily cases remain high.

Even if students return to campus come fall, the state is requiring districts to have remote learning plans.

English language teachers say this means support for English learners has to improve.

“We won’t have the excuse of ‘We’ve never done this before,’” Brannock said.

English language development should be incorporated into core subjects so English learners don’t have one more key subject to juggle, said Matson of Sunnyside.

Teachers should also work to make core content more accessible, Brannock said. A simple example of inclusive teaching her high school found was to upload video lessons to YouTube, where English and Spanish subtitles could be added.

Teachers also advocated for making remote learning more flexible, so students could engage at times that suit their home life.

But connectivity is key, said Munoz. Schools need to make sure students have laptops, internet connections and an understanding of how to use the tools.

Matson said she hoped to see districts create learning opportunities for parents over the summer to teach them technology skills and strengthen relationships.

“Seeing what we’ve learned in the last three months makes me think we can do this in the fall,” said Matson.

Ahead of her sophomore year of high school, Romero Vicencio agreed.

“There were various times I wanted to give up,” she said of remote learning. “I think it’s going to get better.”