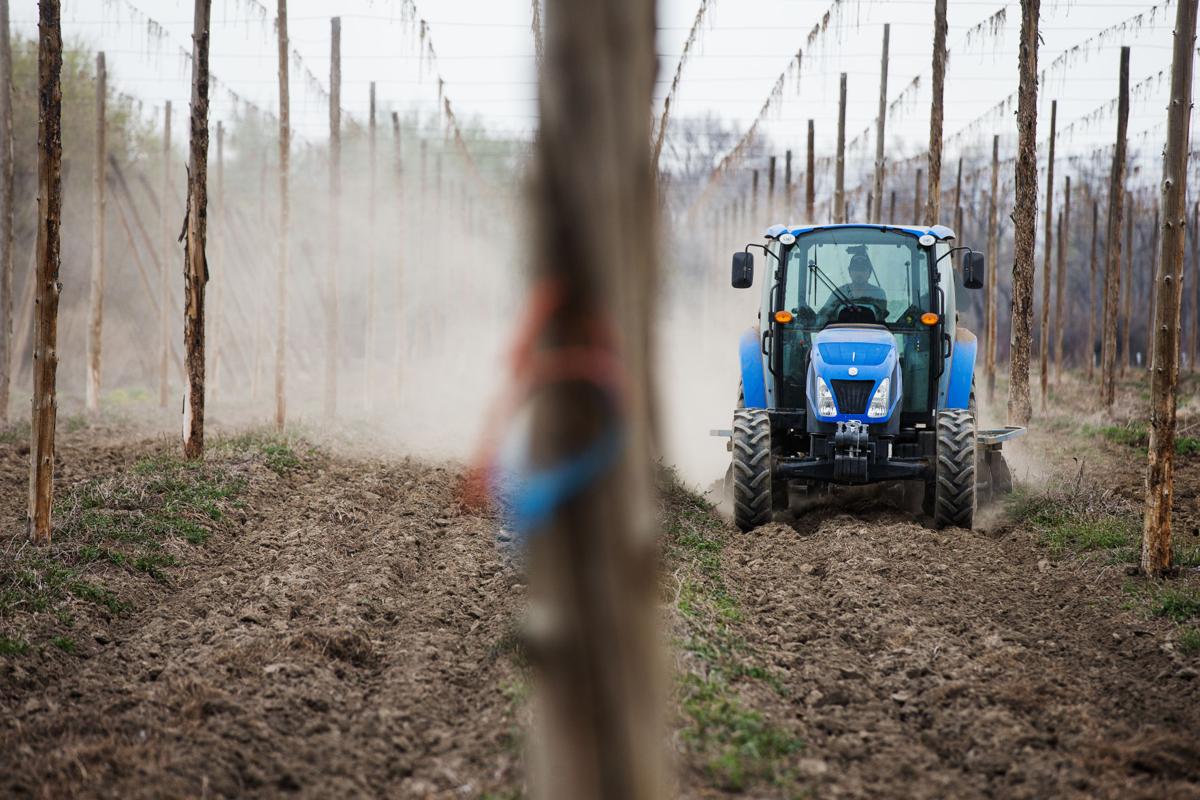 Felipe Silva, equipment operator for Warrior Ranches, drives a New Holland tractor while preparing the ground for a new crop at one of the company’s hops fields in Toppenish, Wash., Wednesday, April 4, 2018. The tractor was recently recovered by authorities after being stolen last month. 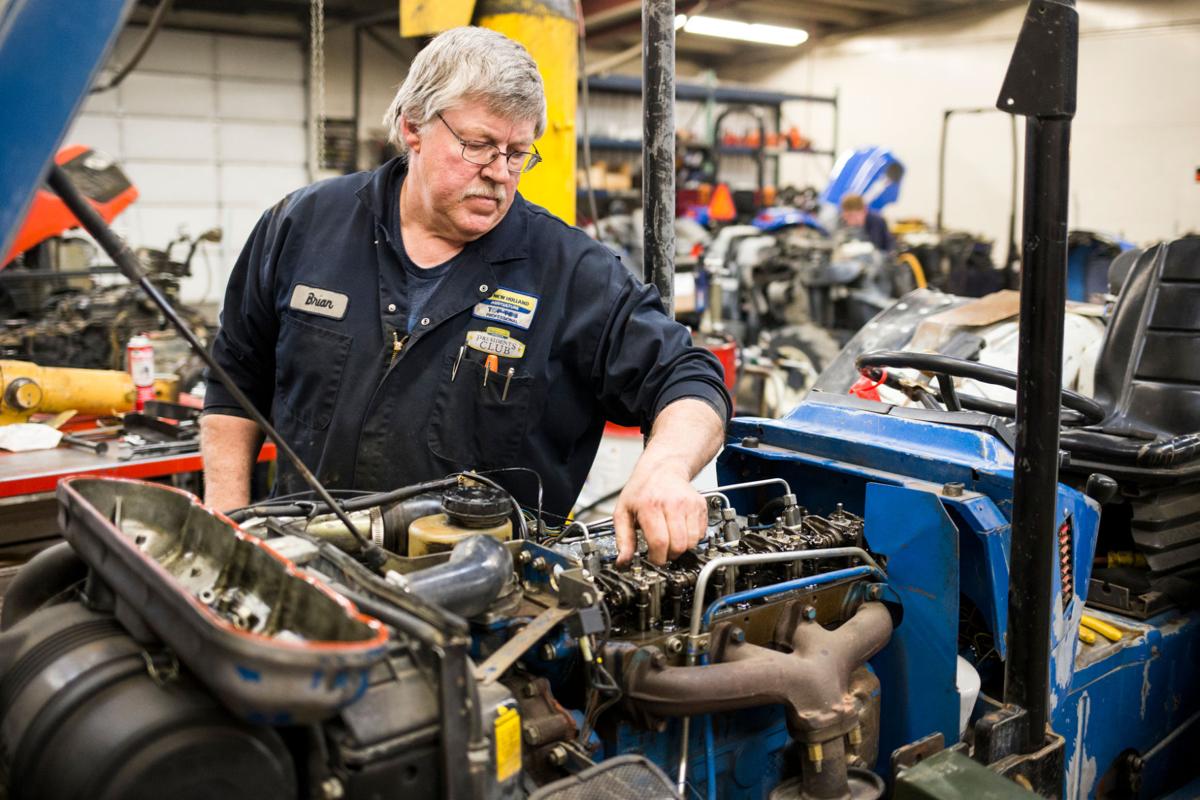 Brian Swanson, technician at Burrows Tractor, works on fixing fuel issues on the engine of a 4230 Ford tractor while working inside Burrows Tractor's maintenance facility in Union Gap, Wash. on Friday, April 6, 2018.

Felipe Silva, equipment operator for Warrior Ranches, drives a New Holland tractor while preparing the ground for a new crop at one of the company’s hops fields in Toppenish, Wash., Wednesday, April 4, 2018. The tractor was recently recovered by authorities after being stolen last month.

Brian Swanson, technician at Burrows Tractor, works on fixing fuel issues on the engine of a 4230 Ford tractor while working inside Burrows Tractor's maintenance facility in Union Gap, Wash. on Friday, April 6, 2018.

Bring up the subject of theft, and practically every farmer has at least one story.

“It has greatly accelerated, both in the frequency and what they are stealing,” said Kevin Riel, who grows fruit and hops in the Harrah area.

It’s a sector of crime that costs farmers nationally tens of millions of dollars — and that doesn’t count collateral losses due to not being able to properly tend a crop because of stolen equipment.

To combat the problem, some farmers are temporarily disabling vehicles or setting up fenced compounds to protect larger implements, and some are packing guns because of an increase in theft.

While authorities take the crime seriously, they and farmers say a relatively small number of officers patrolling a large area of remote territory makes it difficult to spot and stop thieves.

There are no official statistics on farm thefts, and machines such as tractors, riding mowers and farm equipment do not fall into the motor vehicle category. The FBI says it does not track construction and farm equipment theft in its annual Uniform Crime Reports.

Of the thefts reported in 2016, 14 percent were tractors, with mowers representing 41 percent. Miscellaneous farm equipment was lumped into the “all other” category, which totaled 9 percent of all thefts

And equipment thieves also have brand preferences. John Deere products were the top-listed brand, with more than 2,500 products reported stolen, the register reported.

While noting that its listing is not comprehensive, the National Equipment Register estimates equipment theft costs farmers and construction companies between $300 million and $1 billion annually.

Aside from big-ticket items such as tractors and other farm equipment, thieves will also take smaller items they can quickly convert into cash.

One popular target is brass irrigation parts, said Casey Schilperoort, Yakima County sheriff’s spokesman. The sheriff’s office patrols the unincorporated areas in the Lower Valley, including much of the farm areas.

Metal thefts — including wiring and batteries from wind machines — tend to vary in frequency based on the price that copper, brass and other metals are fetching at scrap yards, Schilperoort said.

The National Insurance Crime Bureau reports that 2016 metal-theft claims decreased nearly 60 percent from 2014, at about the same time that copper prices dropped, the group’s report states.

Mark Akland, owner of Akland Pump and Irrigation, said thefts of sprinkler parts, wire and anything that might contain copper were rampant when copper prices were high. In one case, he said someone took one of his company’s vehicles, loaded it with 10 coils of copper wire and drove off.

The vehicle was found partially stripped down, and the wire coils were gone, Akland said.

“I had one customer come by who had $1,800 worth of parts taken when they took his wheel-line mover,” Akland said.

Other factors in the decline of metal thefts are orchardists switching to plastic sprinkler heads and a state law requiring scrap metal dealers to ask for identification from anyone selling metal.

Akland said he used to get approached by people selling brass sprinkler fixtures, but he turned them down, concerned that the material might have been stolen.

Traditionally, many farmers would leave a tractor in the field where they stopped for the day, ready to resume work the next day, Schilperoort said.

In the past, all a farmer had to do to secure a tractor was take the key out of the ignition. But Riel said thieves have found ways to get around that, using key blanks or, in the case of some tractor brands, using a key from the same brand of tractor to start it up and drive off.

Other vehicles prone to thieves include four-wheelers that farmers use to get around their property. Frank Lyall, president of the Yakima County Farm Bureau and a Grandview farmer, said he’s lost a few four-wheelers to thieves, along with a mower and other equipment.

Lyall said the crime is frustrating because some items that get stolen cannot be insured, and the farmer has to bear the cost. Plus, the thefts can harm a farmer’s ability to produce a successful crop.

“If they take the irrigation valves while there’s a crop in the field, that is a problem,” Lyall said.

Taking a page from car thieves, tractor thieves will either ship the stolen vehicle out of state for sale or strip it for parts, Schilperoort said.

To thwart thieves, Riel said some farmers remove tires from trucks in order to keep them from being stolen.

Working against law enforcement and farmers is the remoteness of the area, with deputies and Yakama Nation Tribal officers having to cover more square miles in their patrols than police operating in a city, Riel said.

Riel and Lyall said there was suspicion that a theft ring was operating in the area around White Swan, where the Yakama Nation Tribal Council said crime had become rampant, contributing to the declaration of a public safety crisis earlier this year. Schilperoort said there was an increase in farm equipment thefts around White Swan at that time.

Farmers and orchardists do take steps to protect themselves, such as installing security cameras and trying to secure equipment as well as possible, while also working with law enforcement and their neighbors to prevent crime, Riel said.

“People are getting more fed up with it than they did in the past,” Riel said.

Sheriff’s deputies credit a resident’s call for the arrest of two men suspected of stealing a tractor in the Toppenish area recently.

Authorities say the man was approached by someone offering to sell a tractor to him. Deputies had the man arrange for a test drive near Wapato, where deputies made arrests March 24, according to court documents.

Dustin Eguires, 34, of White Swan, and Mark Dale Petty, 40, of Yakima were charged with first-degree theft, trafficking in stolen property and possessing stolen property in connection with the incident. The pair are scheduled for an arraignment on Monday, when they are expected to formally enter a plea.

Craig Carpenter, the tractor’s owner, said it is not the first time someone has stolen equipment from his property. He is planning to install tracking technology to keep tabs on his equipment, as well as using security cameras around buildings.

Carpenter was one of the lucky ones when it comes to getting equipment back. The National Equipment Register found that 21 percent of stolen equipment was recovered in 2016. Among factors behind the low recovery rate are delays in discovering and reporting thefts, limited law enforcement resources and a lack of screening used equipment purchases, the register’s report said.

John Riel, owner of Burrows Tractor in Union Gap, said position trackers, such as those used on cars to prevent theft, are not always a practical solution. The price for a tracker is between $1,500 and $2,000, and there’s a monthly monitoring fee that increases the cost.

In some cases, the theft is an inside job, done by former farm employees, John Riel said. In those cases, they would likely know about any tracking devices and either destroy them or remove them and leave them behind.

John Riel said the best way to cut back on thefts is to remove the thieves’ financial incentives. And that means potential buyers have to be wary when someone offers a fairly new tractor for half-price or less.

“If there’s a willing buyer to buy a tractor, they’re going to keep stealing them,” John Riel said.

He gets word of about eight to 10 tractor thefts a year, and if someone who is not a regular customer comes in with a tractor needing service, they’ll check serial numbers to see if the tractor has been reported stolen.

“If we run the serial number and find it’s stolen, you’re out your money,” John Riel said.

TOPPENISH, Wash. — Responding to a spike in crime, Yakama tribal leaders have declared a public safety crisis on the reservation and are impos…