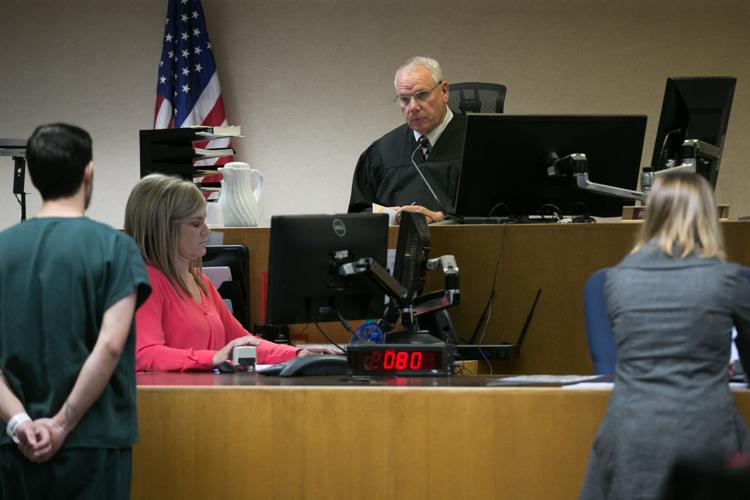 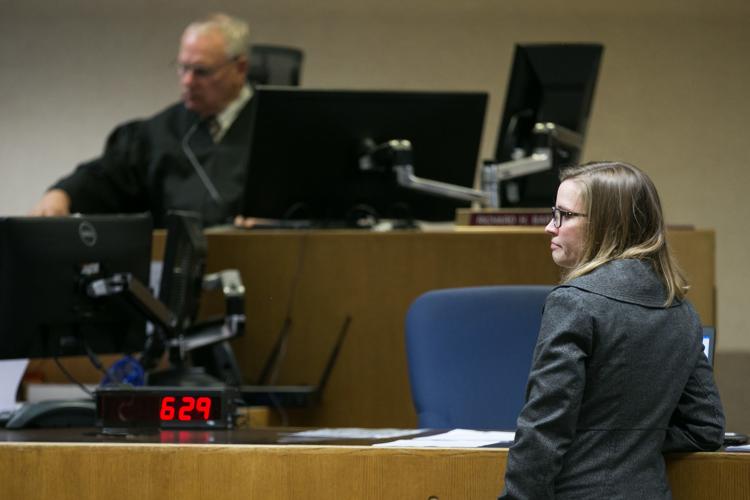 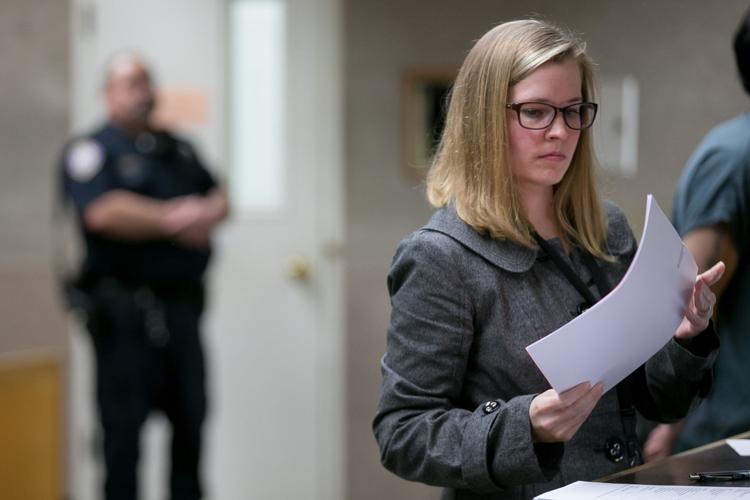 Every afternoon in the basement of the Yakima County jail, recently arrested people dressed in dark-green scrubs come to the front of the courtroom for their preliminary appearance.

At the hearing, a Superior Court judge decides if there was justification to arrest them and how much bail they need to post to be released.

Relying on information from police, prosecutors, a defense attorney, assessments of a defendant’s prior record and finances, judges try to strike a balance between a state-mandated presumption for release and the need to protect the public from violent offenders.

“Law enforcement’s responsibility is to get them off the street,” said Judge Richard Bartheld, who helped implement the pretrial release program in Yakima County. “Our responsibility is to bail them. One of the toughest determinations I have to make as a judicial officer is a person’s terms of release from custody.”

One of Yakima County’s public defenders said that while the system has improved in some ways, bail can still keep someone incarcerated solely for being poor.

“If you set bail at $100,000 for someone who is at a lower socioeconomic status, they are essentially detained without bail,” said Paul Kelley, executive director of the Yakima County Department of Assigned Counsel, which provides legal representation for people who cannot afford attorneys. Having a defense attorney present when bail is discussed can make bail requests more reasonable, he said.

The concept of allowing a suspect to post bail while awaiting trial goes back to English common law. The U.S. Constitution’s Eighth Amendment prohibits the government from imposing “excessive” bail, meaning that the amount must be just high enough to ensure that the defendant will show up in court when required.

Civil rights advocates have argued for decades that it created a system where people who had the means could buy their freedom while others languished.

The law requires courts to ensure that all people can be released pending trial regardless of their means, either by being released on their own recognizance or under supervision, with bail being reserved for cases where there is a higher likelihood that someone will fail to appear in court.

In certain cases, such as aggravated first-degree murder, courts have the option to hold someone without bail.

But within a decade, inroads were made into the law, according to a 2018 study published in the Georgetown Journal on Poverty and Law Policy. In that study, it was reported that efforts to tamp down on rising crime rates in the 1970s, coupled with lobbying from the bail bond industry, led to an increase in the use of bail and more people awaiting trial in jail because they could not afford to pay for their release.

While Washington’s state constitution and court rulings require a presumption of release, studies found that many Washingtonians were sitting in jail because they could not post bail. A 2012 study of Yakima County’s jail population discovered that 60 percent of the jail’s inmates were awaiting trial.

A 2016 American Civil Liberties Union of Washington report warned that people who were incarcerated before trial were less able to fully help with their own defense, were more likely to be convicted or take a plea deal, and faced harsher sentences because they would not be able to show improvements such as successful completion of treatment programs.

That same year, Yakima County implemented its pretrial release program. Working with the Texas-based Laura and John Arnold Foundation, the county used a Public Safety Assessment developed by the foundation that examined factors such as a defendant’s prior history of showing up for court hearings and past convictions, to make a recommendation on whether someone could be released or not.

Civil liberties groups have complained that such assessment tools are flawed because they are based on arrest and conviction data that can be racially biased. Kristin Bechtel, the Arnold Foundation’s director of criminal justice research, said it is important to recognize that there is racial bias “baked in” the data that goes into assessments. However, the assessments are meant to provide an objective measurement that can be replicated, and it is up to judges and attorneys to evaluate the information and ensure that it is improving release conditions across racial lines.

Yakima County’s program has shown significant progress in reducing the number of people awaiting trial in jail, she noted, particularly across ethnicities. She pointed to a study done in 2017 that showed, using samples of 250 cases before and after the program’s implementation, that the number of Latino inmates released went from 49% to 75%, while bail was set in 58 percent of the cases after implementation compared with 86% before. In the same samples, white inmates also saw increased releases, but only from 64% to 73%.

Bechtel stressed that the assessment does not determine if a person should be released or held in lieu of bail. It is merely one of many sources of information that judges use when setting bail.

Bartheld and Judge David Elofson, the court’s presiding judge, said other data include the recommendations of prosecutors, information contained in police reports and such things as a defendant’s connection with the community and their household finances. During preliminary hearings, judges ask defendants about where they work, how much they are paid and how many people they support on their paychecks, both to determine if they need a public defender and to weigh in considering bail options.

Yakima police have a box on their probable cause documents where the officer makes a recommendation on bail, which the judges said they find valuable because it gives them additional insight on a case.

Likewise, Yakima County Prosecuting Attorney Joe Brusic said information from police and the court system are important for his office in making their bail recommendations.

“We ask for a bail that’s high enough to either keep them in custody or, if they do post, they are going to be coming back to court and not committing crimes in the future,” Brusic said.

Bail must be reasonably related to the severity of the crime and the risk posed to the public if the person is released, Brusic said. Sometimes, to protect the public, that means imposing a $1 million bail on someone accused in a violent killing to ensure they do not get out of jail.

At the other end of the spectrum, Brusic pointed to a case in juvenile court where bail was set at $5,000 for a 16-year-old boy who was accused of body-slamming a young boy into the ground head-first in what prosecutors said was a gang-related attack.

“Some people thought that was too low,” Brusic said. “But it was reasonably related to the case. Bail can’t be punitive.”

The boy, who was charged with second-degree assault, was able to post bail six days after his initial hearing. But the release came with conditions, such as not contacting the alleged victim and not going anywhere but home or school without his mother’s approval.

Kelley, the public defender, said one improvement Yakima County has made in its bail proceedings is having a public defender represent the defendant at the preliminary hearing. In the past, a defendant was on his or her own at the hearing, only getting an attorney afterward.

“The bail setting is the most important decision for defendants coming into the system,” Kelley said. “It sets up the case. People who are in jail pending trial have incarceration pressure on them that influences what happens in their case.”

With a public defender present, some defendants have been able to get either a reduced bail, released on their own recognizance or even have the case dropped because there was no probable cause for their arrest.

Elofson sees the representation as giving the judges more information on which to base a decision on how to set bail.

“This is an adversarial system,” Elofson said. “We make a decision with input.”

But that does not mean it is flawless. There have been cases of people who have committed crimes or failed to appear while either on bail or the pretrial release program. From Jan. 1, 2015, to Friday, there were 2,234 cases where a failure to appear was noted, according to the prosecutor’s office.

“You do the best you can. You can’t predict human behavior,” Bartheld said.

In September, the court system addressed the issue in part by requiring people who post bail to check in with the court’s pretrial service office on a regular basis. Previously, those released on bail were not monitored by the courts.

When the court sets bail for someone's release, an accused person can either pay the entire amount or post a bond.

Posting a bond requires paying a bail bond agent a fee, typically 10% of the bail required, as well as other associated fees, according to A-Affordable Bail Bonds, which has an office in Yakima.

While the fees are not refundable, bail bond companies say if someone posts their bail entirely on their own and is found guilty, the courts can use the money to cover fines and other financial obligations.

Kids are waiting months for psychiatric beds. Why it's such a struggle to expand care in WA