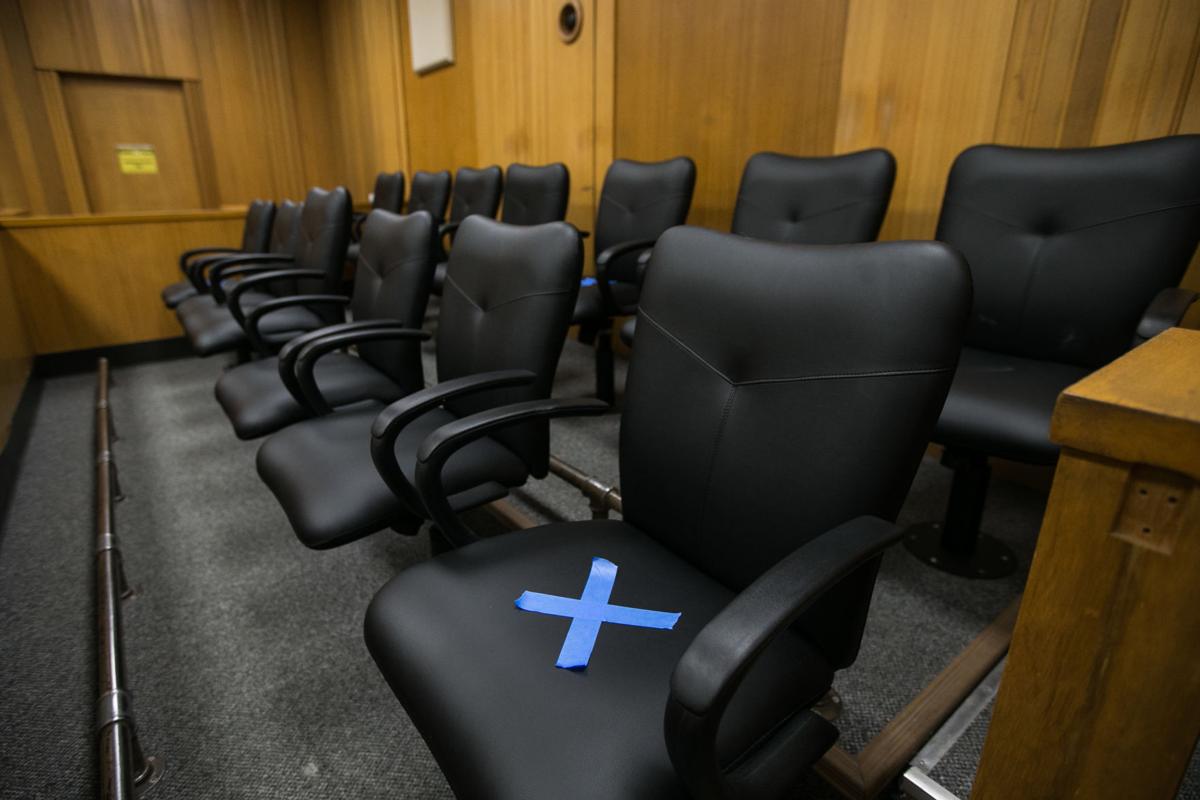 Seats in the jury box marked with signs to enforce social distancing measures are pictured in a closed courtroom Wednesday, May 6, 2020, at the Yakima County Courthouse in Yakima, Wash. 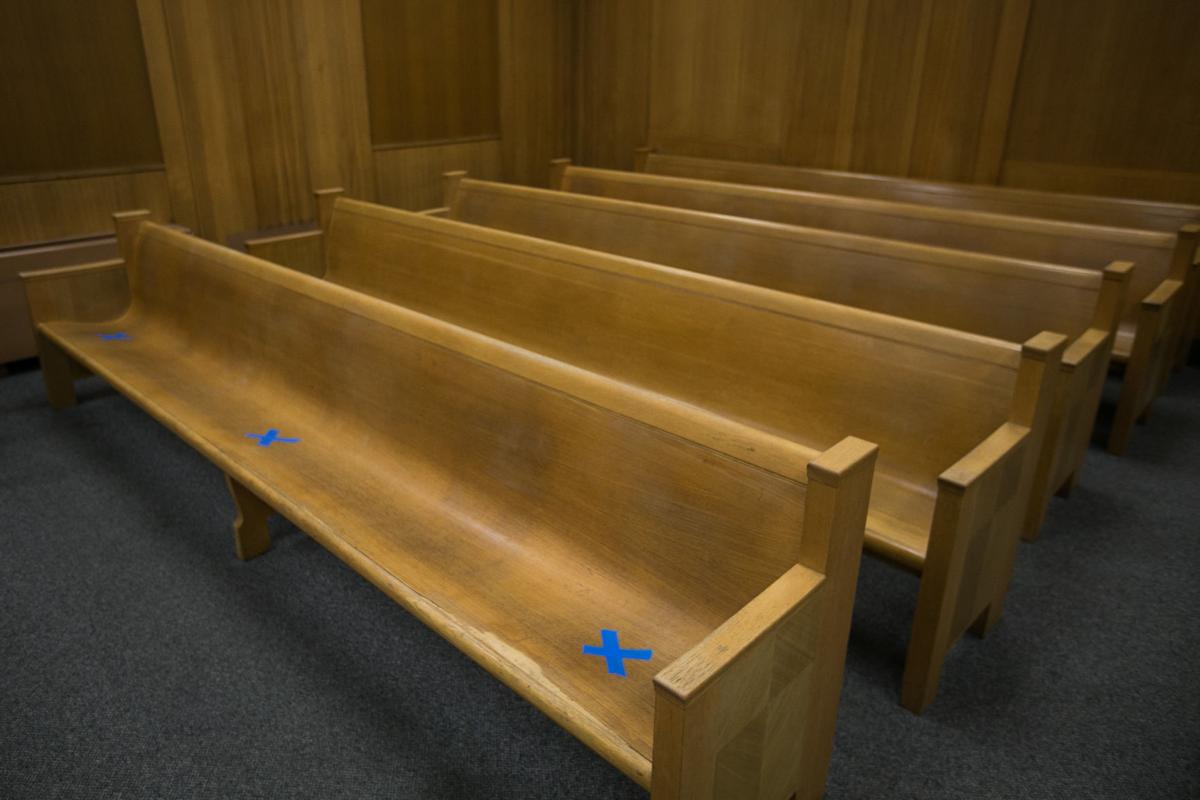 Seats in the gallery marked with signs to enforce social distancing measures are pictured in a closed courtroom Wednesday, May 6, 2020, at the Yakima County Courthouse in Yakima, Wash. 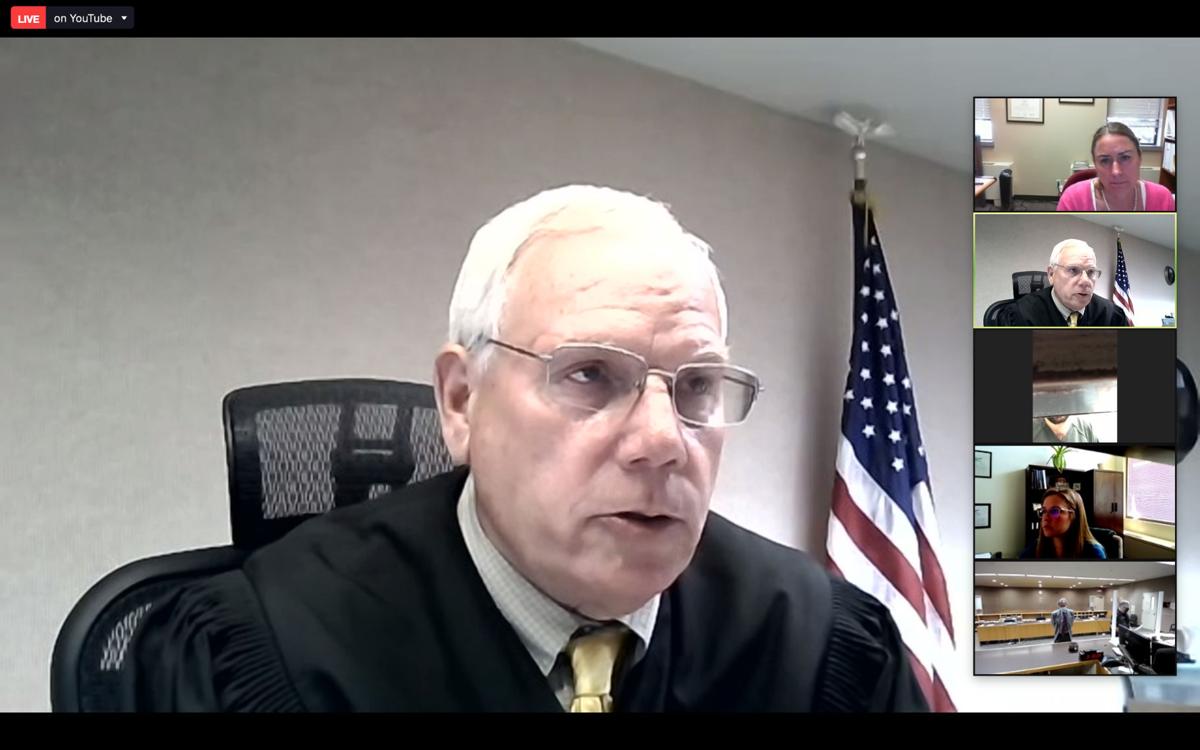 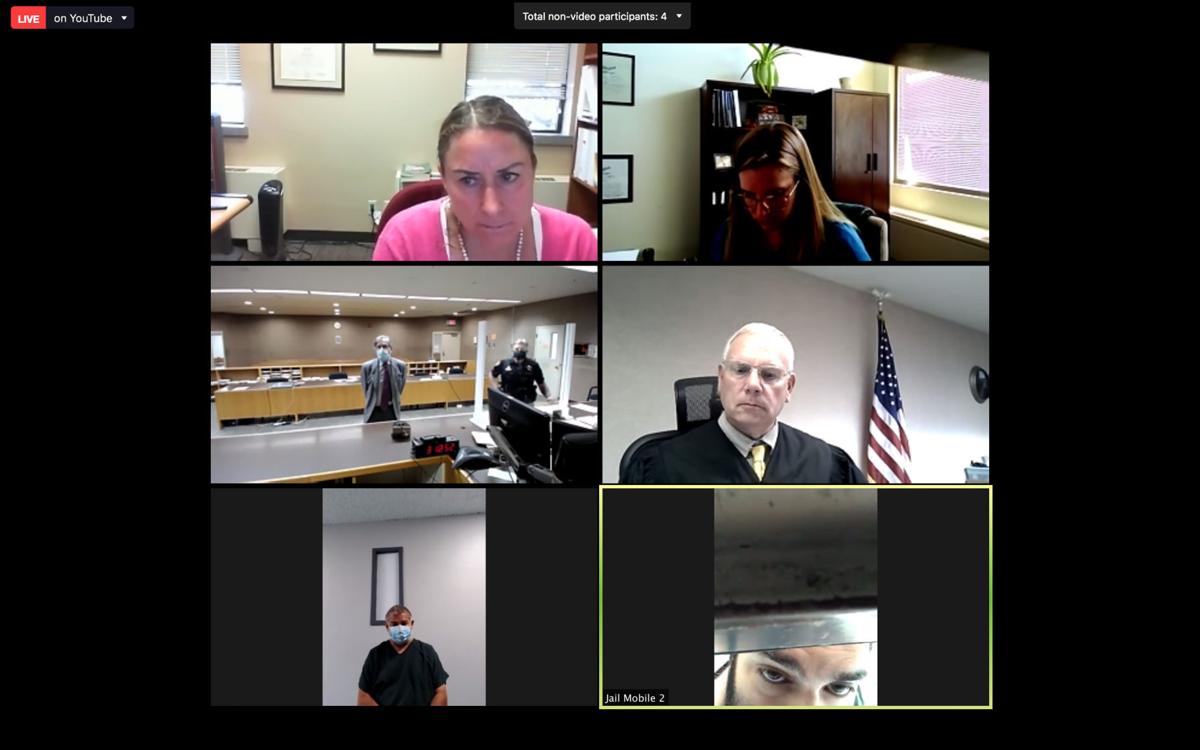 Yakima County Superior Court is in session via Zoom broadcast for preliminary appearances in front of Judge Richard Bartheld on July 20, 2020, in Yakima, Wash.

Seats in the jury box marked with signs to enforce social distancing measures are pictured in a closed courtroom Wednesday, May 6, 2020, at the Yakima County Courthouse in Yakima, Wash.

Seats in the gallery marked with signs to enforce social distancing measures are pictured in a closed courtroom Wednesday, May 6, 2020, at the Yakima County Courthouse in Yakima, Wash.

Yakima County Superior Court is in session via Zoom broadcast for preliminary appearances in front of Judge Richard Bartheld on July 20, 2020, in Yakima, Wash.

Jury trials are expected to resume in Yakima County next month, almost six months after they were halted because of the coronavirus pandemic.

“I certainly understand that people are nervous about this, but we need them,” Brusic said in a phone interview Tuesday. “We cannot provide public safety without jury service. It is exceptionally important, and it is important that people show up.”

Among the safety measures being discussed is using the Yakima Valley SunDome for jury selection, and re-arranging one of the larger courtrooms at the Yakima County Courthouse to accommodate a trial while maintaining social distance between all parties.

Brusic said it is more likely the soonest trials will resume is Sept. 14.

In Yakima County, that has meant that many court proceedings have taken place via the videoconferencing app Zoom.

But jury trials have to be conducted in person, Brusic said, to allow for confrontation of witnesses in open court.

The high court put guidelines in place allowing jury trials to resume in July, if safety measures could be put in place.

While still in a modified Phase 1 of the state’s reopening plan, Yakima County’s infection rate has dropped significantly, and officials want to relieve a backlog of cases.

Brusic said there are several cases that are pending that his office would like to resolve, including homicides. The trials of three men accused of killing an inmate in the Yakima County jail was originally scheduled for August, but has been rescheduled for October, and Benico Xavier Lopez’s murder trial has been pushed from August to February due in part to coronavirus concerns, according to court documents.

Paul Kelley, director of the Department of Assigned Counsel, which provides representation for indigent defendants, said some defendants would like to have their legal issues resolved sooner rather than later, particularly if they are being held in jail before trial.

While the coronavirus has strained how attorneys prepare for trial, such as interviewing witnesses and meeting with clients, Kelley said reopening the courts will require assuring people that it is safe to do so.

“If I got a summons for jury duty, my first question would be is would it be safe?” Kelley said. “What are the things they are going to do to make it safe?”

Another consideration is having measures in place to ensure that a jury that truly represents the community can be assembled, while balancing safety for participants. Segments of the population may be in higher risk categories for the virus and, if they cannot serve safely, it could skew jury composition, he said.

Kelley said he has participated in discussions about plans to resume jury trials, but he said that does not mean there’s agreement as to whether the county is ready to proceed.

“There is still a lot of work to be done,” Kelley said.

Along with requiring the use of masks and distancing to minimize disease spread, court representatives are looking at bigger venues to select jurors.

Brusic said he and court representatives toured the SunDome as a site for jury selection, where as many as 250 people are winnowed down to a panel of 12 jurors and three alternates. The venue offers enough space for the jury pool as well as other participants, and security issues are being worked out, Brusic said.

It would cost the county $1,000 a day to rent the venue, he said. Yakima County District Court, which is planning to resume jury trials in October, is looking at the Yakima Convention Center as a site for jury selection.

Trials would have to be conducted in the courthouse, however. Aside from wanting to avoid potential issues that an appellate court could deem as grounds to throw out a verdict, Brusic said a courtroom is designed to command people’s respect for the court and the law, from its décor to the seating arrangement with the judge on an elevated platform.

That means having to rearrange one of the larger courtrooms to accommodate the requirements to keep jurors and court participants far enough apart to avoid disease spread. Changes might involve installing plexiglass shields, changing the seating arrangements and other measures, such as livestreaming the proceedings to another room for spectators.

Kelley said it is important that the county communicate its plan with the public and potential jurors.

Brusic said the court will sent out a letter to those who received jury summons explaining the measures that are being taken and are under consideration for safe trials to proceed. That letter is expected to go out either Friday or early next week.