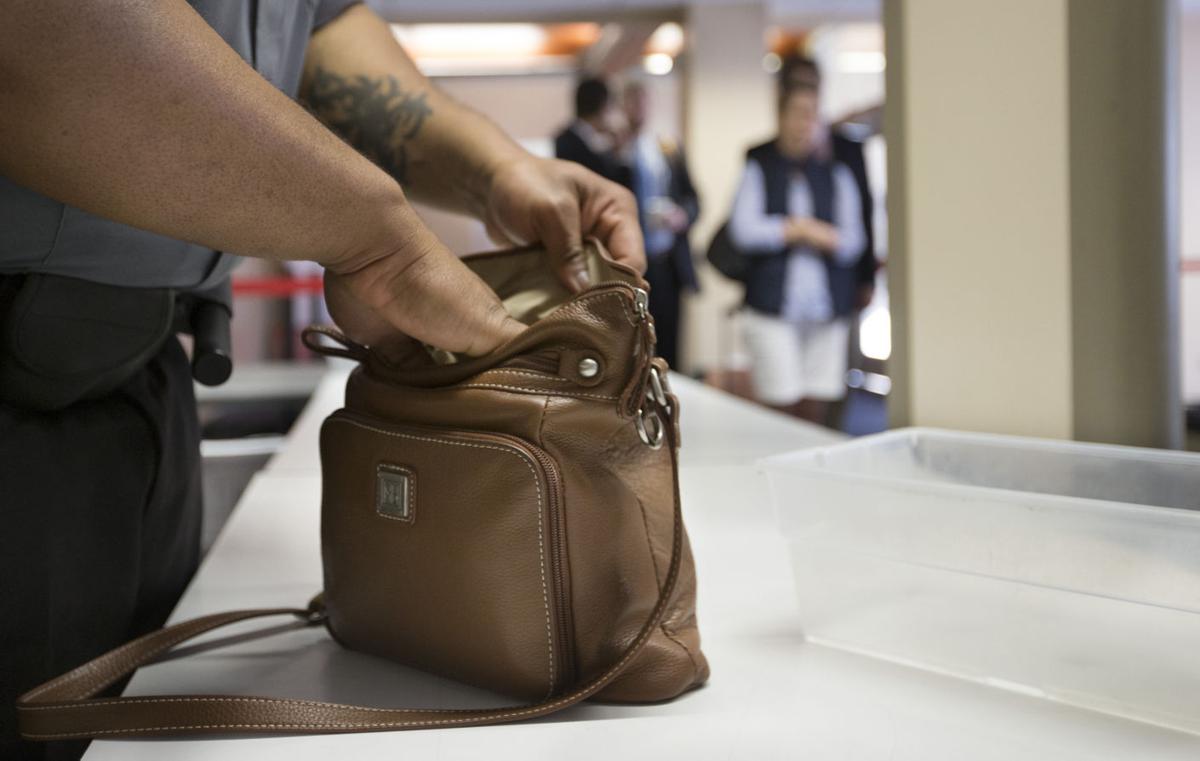 A security guard searches a woman's purse as others wait to pass through the security checkpoint at the Yakima County Courthouse June 10, 2015. Long lines can form at the checkpoint because every bag is searched. (GORDON KING/Yakima Herald-Republic) 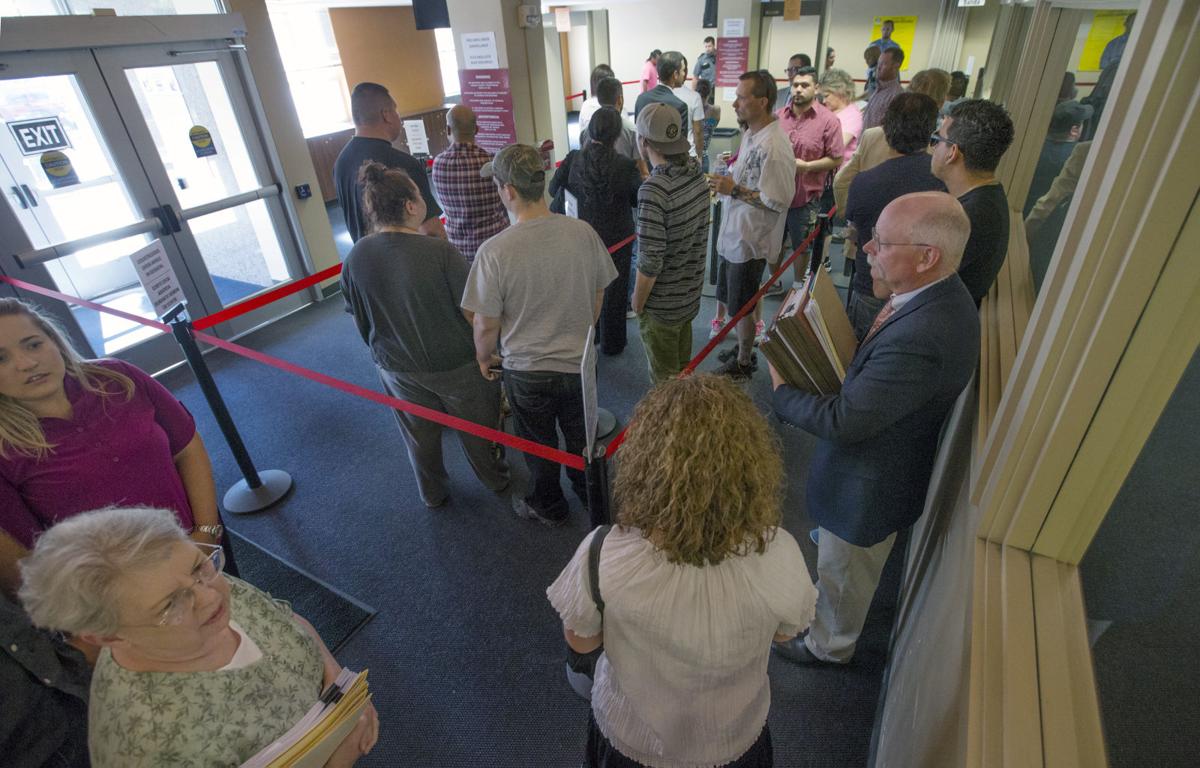 A long line forms as people wait to pass through security screening at the Yakima County Courthouse June11, 2015. Every person is screened, one at a time, which leads to the long lines. Public access to the courthouse has been limited to one entrance which also contributes to the formation of the lines. (GORDON KING/Yakima Herald-Republic)

A security guard searches a woman's purse as others wait to pass through the security checkpoint at the Yakima County Courthouse June 10, 2015. Long lines can form at the checkpoint because every bag is searched. (GORDON KING/Yakima Herald-Republic)

A long line forms as people wait to pass through security screening at the Yakima County Courthouse June11, 2015. Every person is screened, one at a time, which leads to the long lines. Public access to the courthouse has been limited to one entrance which also contributes to the formation of the lines. (GORDON KING/Yakima Herald-Republic)

Security officer Jeremy Reed frequently sees it at the Yakima County Courthouse: lines of people spilling out of the building and sometimes reaching about a half a block to the corner of North Second Street and Martin Luther King Jr. Boulevard.

Each person entering the courthouse must place their belongings into plastic trays, remove their belt, surrender purses and bags to a search, and walk through a metal detector.

Long lines are no cause for personnel to rush. “We’re going to be here, do the job,” Reed said one recent afternoon. “It’s still one bag, one person at a time.”

Once, the general public could simply walk into the courthouse without any security checks through entrances at both ends of the building. But that was before increasing violence at government structures, including schools, prompted a nationwide move to heighten security.

Long lines have been increasing in frequency because nearly four years ago, the county stepped up security at the courthouse by reducing public access to a single set of doors facing Second Street and installing security guards and metal detectors.

Everyone is screened, one at a time, before entering. But the intense screening slows access to the building, often clogging the lobby and sidewalk outside when foot traffic into the courthouse is high, especially during jury trials and tax season.

Yakima County Commissioner Kevin Bouchey said a safer courthouse is worth the wait in line because gang-related murder trials and domestic violence cases aren’t going away.

“It’s a changing world and unfortunately we have to do this,” Bouchey said. “It’s a necessity.”

Anywhere from 1,150 to 1,700 people file into the courthouse daily. Not everyone comes in for court-related matters. Some pay their property taxes, others seek to have proposed construction projects reviewed by planners or purchase building permits. Offices of the treasurer, auditor and assessor are also housed in the courthouse.

Most of the security concerns surround the increasing number of violent cases handled at the courthouse and potential clashes that could arise in those involving opposing gang members, said Sgt. Joel Clifford, who oversees courthouse security operations.

Since deploying more stringent security measures, Clifford said, there have been some interesting findings.

Last month alone, security officers turned up 660 items that could be used as a weapon, such as pocket knives and utility tools.

“Things that no one would want to get stabbed or hit with,” he said. “You have a lot of farmers. They’re used to carrying a pocket knife. That’s the majority of what we find. People forget about it and leave it in their pocket.”

Pocket knives, along with any weapons such as firearms and pepper spray are placed in lockers.

Alarming is the number of guns placed in lockers now compared to before extensive security measures were put into place, Clifford said. Previously in 2011, security would see about four or five guns voluntarily turned in a year. Now, they are securing nearly that number a day.

“So there was no telling how many people were walking around in here with a gun,” he said.

Security at the courthouse is twofold: A team of officers employed by the Yakima County Sheriff’s Office works courtroom security while private security officers from Phoenix Protective cover the main entrance.

Three years ago, the county began contracting with Phoenix Protective so county officers could focus on keeping courtrooms and other areas of the courthouse safe.

The county spends roughly $662,130 a year on security, which includes the contract with Phoenix and a security officer at the Juvenile Justice Center on Jerome Avenue and another at Yakima County District Court in Grandview.

There are a handful of arrests at the Yakima courthouse every month for violations ranging from possession of drugs or an illegal weapon to violating a no-contact order in the hallway or outside in the parking lot, and occasionally a courtroom fight, Sgt. Clifford said.

“Water pitchers thrown, head butts make up the bulk of the courtroom fights,” he said.

Several years ago, a mentally unstable man attempted to enter a courtroom with a sword and  nunchucks, a weapon used in martial arts, Clifford said.

“We’re fortunate that nothing significant has happened prior to the implementation of screening and higher level of security,” Commissioner Bouchey added. “We definitely dodged the proverbial bullet. We feel by having the level of security we do, we’re mitigating that.”